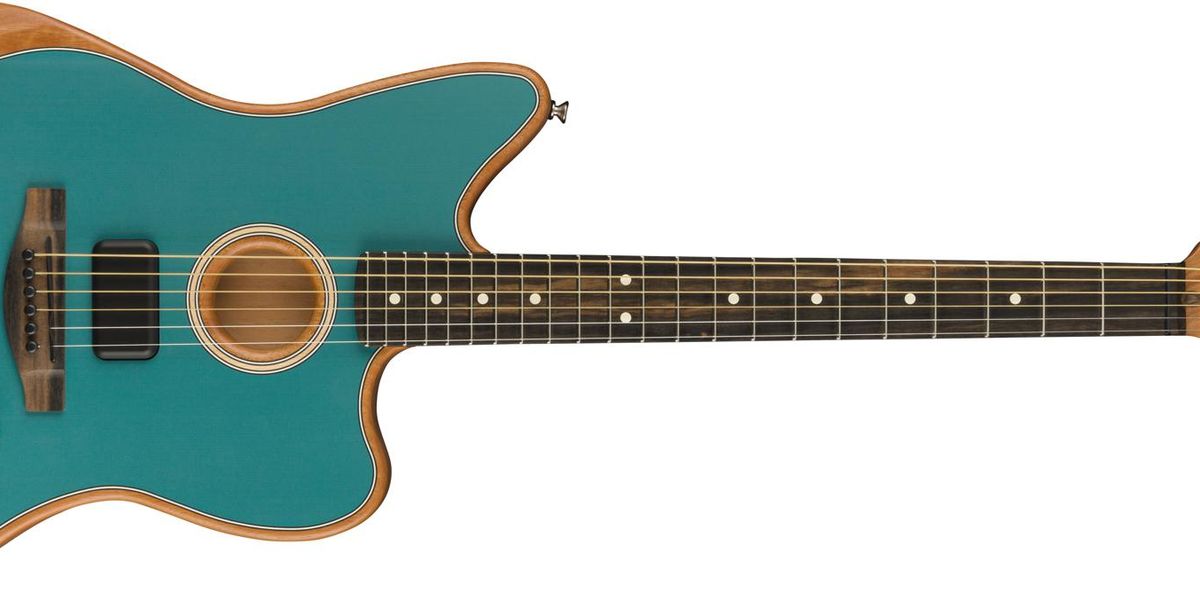 Back in June 2020, I reviewed the Fender Acoustasonic Stratocaster. It was my first long-term exposure to Fender’s new Acoustasonic line, and like many old-school-leaning Fender-design enthusiasts, I greeted the concept with mild skepticism. But the Acoustasonic surprised and impressed on many levels—sparking fun and inspiration in ample measures and at many turns.

The Jazzmaster’s acoustic sounds—created via the onboard acoustic “engine” designed with Fishman—aren’t digital models. They’re generated via a combination of digital and analog processing that interacts with the guitar’s actual acoustic body properties. Generally, the differences in these voices are most perceptible as shifts in EQ emphasis. And without the Acoustasonic Stratocaster alongside for comparison, it’s hard to say exactly how significantly the Jazzmaster’s new “all-mahogany small body” voice, for instance, differs from the Stratocaster’s “spruce-and-walnut, short-scale” voice. But other unique features like the Jazzmaster’s “lo-fi piezo” voices and the humbucking electric sounds make the guitar feel geared toward contemporary, more experimental, and more hard-rockin’ musical situations. That doesn’t minimize the impressive utility of the very nice acoustic-style voices here. But the Jazzmaster, more so than its other Acoustasonic siblings, signals an invitation to invention and marks a real point of departure in this interesting line of the Fender family tree.

Stylistic appraisals of an instrument like the Acoustasonic Jazzmaster are subjective. And the look of the Acoustasonic instruments can be polarizing, in general. But Fender deserves credit for stretching the design envelope, and the Acoustasonic Jazzmaster is arguably the most balanced realization of the Acoustasonic design ethos yet. The offset body’s proportions are well suited to the compound, sweeping curves that make up the instrument’s visage. If you look at it just right, you can even see traces of other Fender designs. (I see more than a hint of the Kurt Cobain-designed Jag-Stang in the outline of the inlaid top.) As on the other Acoustasonic instruments, softer, more gently contrasting colors, like the natural and arctic white finishes offered on the Jazzmaster, suit the complex curves best. But our satin ocean turquoise review guitar looked super sharp, and is a nice nod to Fender’s first great custom-color era.

Like all Acosutasonic guitars, the Jazzmaster is built around a mahogany body that is routed for the lightly braced Sitka spruce top (the turquoise finished section, in this case). The join feels virtually seamless, and that same sense of precision and craft is evident everywhere.

The “lo-fi” piezo is gloriously trashy and garage-y in the kind of way that a young Beggars Banquet-era Keith Richards would have savored.

Like any Jazzmaster, the Acoustasonic version’s lower horn lacks the length of a Stratocaster of Telecaster, and it can slip off of your lap when playing seated—which, of course, is how many folks chose to have an acoustic guitar experience. But that is perhaps the only ergonomic complaint you can level against this otherwise supremely comfortable instrument.

Fender’s attention to detail on the Acosutasonic shines brightest when you put fingers to fretboard. Like the Acoustasonic Stratocaster’s neck, the Jazzmaster’s feels fantastic. The fretboard is shaped with a 12″ radius to better suit the guitar’s mission as an acoustic, but the “modern deep C” profile and rounded fretboard edges make the neck feel like a classic Fender with a more curvaceous radius. Chording is a breeze over the whole expanse of the neck, the action feels low and fast, and I couldn’t find a trace of string buzz anywhere. The .011–.052 phosphor bronze strings that the guitar ships with make deep bends a more difficult proposition than on a lightly strung electric. But the narrow-tall frets that have become a standard feature on many Fenders beckon you to try, and facilitate nuanced finger vibrato techniques.

Unplugged, the Jazzmaster is surprisingly resonant and blooms with sustain. And in some amplified “acoustic” modes and isolated direct-to-DAW settings, that resonance can translate to a slight imbalance between deep low-end sustain and boxier high mids—particularly in the dreadnought voices. Such properties mean you may not want to make the Acoustasonic your first choice for recording a solo fingerstyle piece. But as part of a more complex arrangement, these voices can shine. The ability to blend voices means you can craft the Jazzmaster’s acoustic sounds for a mix without having to tinker endlessly on the mixing side. And if you record the guitar direct to a DAW, a little vintage-style compression, console-style preamp thickening, and high-mid EQ tweaking can go a long way toward softening any less-than-natural artifacts.

The new humbucker has a very different tone profile than the single-coil in the Acoustasonic Stratocaster. Where the Strat’s single-coil is unmistakably Fender-y, spanky, and clear, the humbucker is, predictably, more muscular. At its cleanest settings, it evokes hotter single-coil pickups like the Rickenbacker Hi-Gain and the P-90. Blend in the more aggressive “overdriven electric” voice and the P-90 presence gets stronger. There isn’t as much round, wooly PAF-style humbucker tone on tap as you might expect. But the volume pot has a nice taper and is an effective means of shaping cleaner tones and more specific gain profiles. The “lo-fi” piezo also merits mention, because it’s essentially a third electric guitar voice. Its trebly but overtone-rich voice won’t be everyone’s cup of tea, but it is gloriously trashy and garage-y in the kind of way that a young Beggars Banquet-era Keith Richards would have savored.

The Acoustasonic Jazzmaster is a thoroughly modern instrument. It suits the needs of musicians that work across genres and in smaller studios and dwellings, where keeping a five-guitar quiver at hand isn’t possible. But apart from its considerable practical upside, it’s a true joy to play. And between its natural, comfortable feel and the ease with which you can access such a wealth of diverse sounds, the Acoustasonic Jazzmaster is full of musical potential.