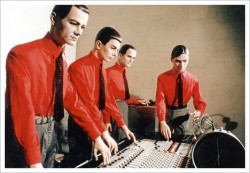 The Rock & Roll Hall Of Fame has announced that seminal electronic pop band Kraftwerk is one of its inductees for 2021.

The inductees for the band are the classic lineup of Karl Bartos, Wolfgang Flür, Ralf Hütter and Florian Schneider.

Here’s what the Hall Of Fame has to say about the group:

Kraftwerk are the foundation upon which all synthesizer-based rock and electronic dance music is built.

Founded in Düsseldorf in 1970 by the band’s two core members, Ralf Hütter and Florian Schneider, the group was part of a new wave of musicians in Germany collectively referred to as “Kosmische Musik” (cosmic music), exploring the intersection of rock & roll and the avant-garde.

Their first three albums capture the sound of an experimental proto-punk jam band riffing on Hawkwind and the Velvet Underground, but their fourth album Autobahn (1974) – created with producer Konrad “Conny” Plank – established the beginning of something new. The 22-minute title track combined the influences of the Beach Boys and Karlheinz Stockhausen into an electronic musical odyssey. It also represented a miraculous use of technology through the amalgamation of Moog synthesizers, multitrack recording, and traditional instrumentation.

Kraftwerk’s 1977 album Trans-Europe Express completed their transformation into a synthesized quartet, featuring some of the funkiest grooves and vocoder melodies ever put on wax. New York City’s burgeoning hip-hop community quickly latched on to the album, and DJ Afrika Bambaataa based his track “Planet Rock” (1982) on Kraftwerk’s beats.

The following years secured Kraftwerk’s place as both musical innovators and master songwriters.

The albums The Man-Machine (1978), Computer World (1981) and Electric Café (1986) established the blueprint for modern electronic music – without them it simply would not exist. Kraftwerk have been sampled widely, from New Order’s use of “Uranium” in their masterpiece “Blue Monday,” to artists as varied as Jay-Z, Sunshine, and Coldplay. The band’s influence can be heard in the synth-pop of Depeche Mode, the electronic-rock integration of U2, the production techniques of Kanye West, and in countless EDM and dubstep artists.

Kraftwerk are entirely unique – they have produced Number One chart success with their song “The Model” and were invited to perform at MOMA and the Tate Modern for their contributions to avant-garde art. Kraftwerk have been, and will always be, “Music Non-Stop.”

Kraftwerk is being recognized with an Early Influence Award, along with Charley Patton & Gil Scott-Heron. Other 2021 inductees include Tina Turner, Jay-Z, Foo Fighters & Todd Rundgren.

To be eligible, artists are required to have released their first record 25 years prior to induction. The 36th Annual Rock & Roll Hall of Fame Induction Ceremony will take place on Saturday, October 30, 2021 at 8 p.m. ET.