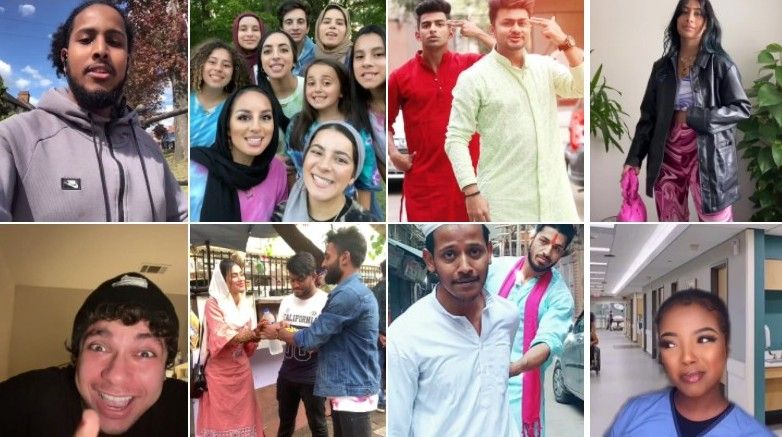 What are TikTok Trends? Quite simply, they’re how social video app TikTok groups together its trending hashtags and songs. It’s easy to find the biggest current TikTok Trends within the app, by clicking the ‘Discover’ magnifying glass and choosing Trends at the top of the screen.

While the top trending hashtags on other social networks like Twitter normally disappear after a day, TikTok Trends can hang around for months. But that doesn’t mean TikTok is boring: quite the reverse. In fact, it highlights just how inventive its creator audience is, as new ideas to extend and evolve the meme constantly keep coming forward (find out more about TikTok here).

TikTok Trends typically refer to a specific challenge, such as #KeepToTheBeat or Build a B*tch. but can also highlight a subject, topic or theme, such as the eternally popular #MakeUpCollection or the currently topical #staycation.

Why should you know about TikTok Trends? Because not only is TikTok the fastest growing social media platform in the world, with close to a billion users, it’s also the best at reflecting real life human experiences, albeit in a fun and often comedic manner.

And that means while other social networks largely reflect popular culture, TikTok is increasingly driving it, from the songs that become global hits, to fashion, lifestyle and even political trends. TikTok is also having a major influence on other social platforms, who are desperately trying to ape its functionality (read our guide to Instagram Reels vs TikTok for just one example).

A few years back, it was only tweens and young teens who knew about TikTok. But in 2021, that’s all changed, and you’re as likely to see videos made by parents go viral as those of their kids.

The platform has become truly global too, being available in 75 languages and 155 countries (with the notable exceptions of India, where it’s been banned, and China, where there’s a walled-off local version). Most strikingly, according to TikTok’s official statistics, 90 per cent of users access it on a daily basis.

Whether you’re a creative freelancer or working at an agency, you need to understand the culture you’re serving, or your work will fail to connect with your audience. Increasingly, that culture is being forged right on TikTok, so it’s well worth paying attention. Read on as we outline some of 2021 TikTok Trends you need to know about, and why they matter.

The #tellmewithouttellingme trend lets creators address almost anything that’s on their mind, in a fun way. Typically, the creator will say something like ‘Tell me you’re drunk without telling me you’re drunk. I’ll go first.” Then they’ll do something that makes it clear they’re inebriated, without using those actual words. One highly shared example features a young man walking around a bar district, showing people the chicken nuggets he has stored in his trouser pocket. Enough said.

#tellmewithouttellingme is almost the perfect TikTok trend, because there are endless variations on the question itself, not to mention the range of answers. So it never gets repetitive, and this trend is likely to run for years. Other examples include Tell Me You’re The Youngest Without Actually Telling Me You’re The Youngest and Tell Me Your Parents Are Cool Without Actually Telling Me Your Parents Are Cool.

What it reveals: Rather than encourage an Instagram-like devotion to perfection, TikTok gives creators a way to share their real lives, in a fun and accessible way.

Reply to @beau_6998 Since everyone asked for it 😂 #seashanty #singing

TikTok has its roots in dancing and miming to pop songs, and this is very much still part of its DNA. Music-related TikTok trends frequently explode into the broader world of popular culture, and none more so than with Scottish postman Nathan Evans’ resurrection of Wellerman, a 19th century New Zealand sea shanty.

This TikTok Trend started out with people just singing the song themselves, but this then expanded to duetting with the original (via TikTok’s cool split-screen feature), adding extra instrumentation, or performing it in a radically different style, from R&B to 80s indie pop.

Celebrities have got in on the act too, from Andrew Lloyd Webber to Queen guitarist Brian May to Space X founder Elon Musk. Other TikTok users have added comedy lyrics to the song, used it as the soundtrack for stunts, skits, set dances, and more.

What it reveals: Forget radio, TV and even playing live: TikTok is now the most powerful way to promote your music around the world. How else could a medieval whaling shanty have been the biggest global hit of 2021?

‘Sheesh’ is a word that dates back to the 1950s and is defined by the Oxford English dictionary as a word ‘used to express disbelief or exasperation’. It saw a resurgence in popularity in the middle of the last decade, first in hip-hop lyrics and later on social media in general. Then on 14 February 2021, TikTok user @meetjulio posted a video of a frog with a group of people off-screen yelling “Sheesh!”.

On TikTok, you can use the soundtrack of anyone’s video (or indeed the video itself) in your own video without permission. And so a trend began for using @meetjulio’s sound as a backdrop for a series of skits. Most of these revolved around showing something you were proud of to friends or family, with the ‘Sheesh’ sound representing their approval.

Since then, this TikTok Trend has morphed into something more specific. Now, typically, #sheesh videos involve young people imagining a future in which they’ve achieved some sort of life goal. There’s usually a lot of implied sarcasm here, as hip young things imagine themselves as dull oldsters, with visions of ‘The homies in 10 years when I show off my low maintenance moss lawn’ or ‘The boys coming over in 30 years to see the Bougainvilleas I put on the side of my beautiful home’.

What it reveals: TikTok Trends like #sheesh are often impenetrable to outsiders at first glance… which is just how users like it. However, they’re easily decoded with a quick Google search or (preferably) by just watching the videos yourself. Make a bit of effort, and you’ll soon have a better idea of how modern youth culture works.

While the #sheesh trend has young people looking forward to their future, the #2018vs2021 trend sees them looking in the opposite direction. The challenge goes ‘Who would win? The version of you from 2018 or your 2021 self?’. And the result is a series of videos that point to how much things have changed for people over the last three years. These are generally set to the song MotorSport by Migos & Nicki Minaj & Cardi B, and the change in year takes place squarely on the drop.

Sometimes this is fairly superficial: a change of haircut, or a new set of clothes. Other times the changes are more profound, such as coming out, completing a gender transformation, dealing with disability, not working due to lockdown, or becoming an immigrant.

What it reveals: While marketers and media often think of groups such as Gen Z or Millennials as fixed and immutable, people in real life are constantly growing and changing. And the 2018 v s2018 trend shows just how aware they are of it.

AND THATS ON… MAKE EID AN ANNUAL HOLIDAY!! 😂🤦🏽‍♀️ I’m so over these convos… #fyp #foryoupage #eid #eidmubarak #comedy

While some TikTok Trends like #sheesh are pretty obscure and niche, others are broad and self-explanatory. A great example is the #eidmubarak Trend that recently gave the world’s 1.8 billion Muslims an opportunity to talk about their culture and religion via the medium of short video, along with others wishing to express their friendship and solidarity.

A trawl through this TikTok trend highlight just how many different angles people have on the topic, from those that focus on the serious religious and spiritual aspects of the festival to the challenges of fasting or the need to dress up for Eid. Not to mention using the hashtag to raise broader points about the stereotyping of Arabs, Muslims and the Middle East, or celebrate family in general.

All, though, stand in stark contrast to coverage of Islam on mainstream TV, which typically comes from the perspective of non-Muslims. Being created by Muslins themselves, videos following this TikTok Trend are generally much more human, fun, entertaining and informative.

What it reveals: The #eidmubarak trend highlights just how global our culture is becoming. Hopefully this means future generations will be better informed about how other religions, ethnic groups and nationalities live and see the world.

As you’ve probably noticed from its recent TV advertising, TikTok is keen people know that’s it’s not just an entertainment platform, but somewhere you can learn about the world too. Hence the #learnontiktok trend, which encompasses all types of learning, from specific skills like How to remove a colony of bees to ‘life lessons’ such as How do you win an argument?.

You might think that shortform video wouldn’t be a great platform for learning anything, but in practice this TikTok Trend proves you can get across an awful lot of useful information in just a few seconds.

For a great example, check out online business evangelist Gary Vaynerchuk’s TikTok channel. Rather than just speaking to camera, his clips typically show him engaging with young entrepreneurs and answering their questions about business and life in general, with refreshing honesty.

What it reveals: TikTok isn’t just about dumb fun. Its users are also keen to learn new things, or just get a greater sense of the possibilities life has to offer.