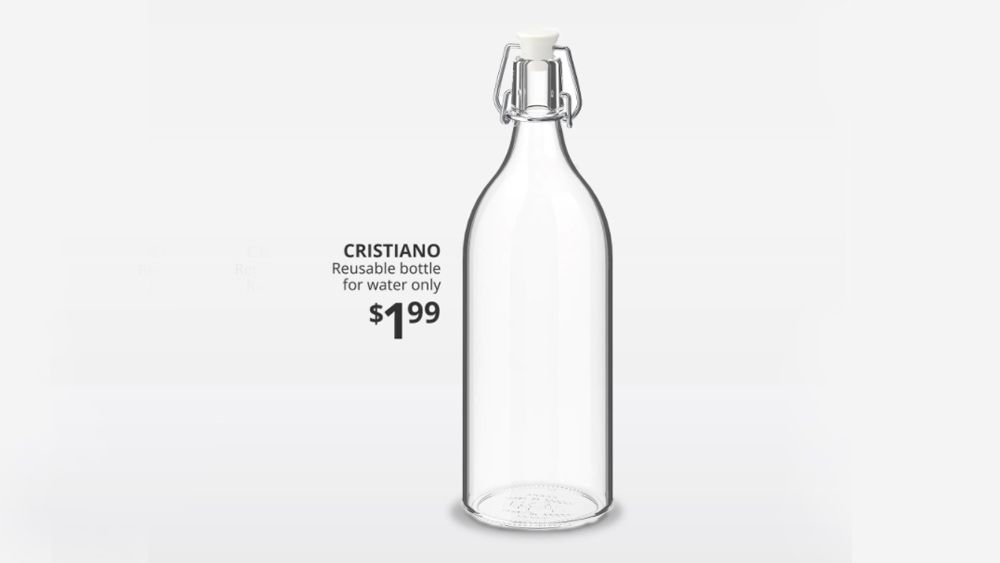 IKEA’s got form when it comes to impromptu, creative marketing campaigns, and the Swedish furniture giant was quick off the whistle with this one. In a clever response to Cristiano Ronaldo’s stance on Coca-Cola (keep reading if you missed it), it posted an ad that renamed its  KORKEN reusable glass bottle after the footballer, noting that it’s designed “for water only.”

Taking leave from the furniture brand’s tradition of using Swedish names for its products, IKEA Canada revealed the CRISTIANO reusable water bottle on Instagram and Twitter with the comment “Drink water, sustainably @cristiano #Euro2020.” (see our guide to the best print ads of all time for more marketing inspiration).

The post refers to Ronaldo’s inadvertent provocation of worldwide furore when he moved aside two bottles of Coke at a press conference, saying “Agua (water in Portuguese), no Coca-Cola” The gesture, ahead of Portugal’s UEFA European Football Championship clash with Hungary, sent Coca-Cola shares spiralling and was copied by other players in the tournament.

IKEA’s post hit the back of the net on social media. “Give your marketing team a raise,” commented @girlinwhiteglasses on Instagram, while @escuderopep tweeted, “This is marketing just in time! Brilliant!” Also on Twitter, @petroweaver quipped: “For once an easy to remember product name from IKEA.”

This is marketing just in time! Brilliant! Congrats the genius behind the idea! Bravo! 😎 pic.twitter.com/yvxUo0pfO7June 22, 2021

For now, IKEA’s up 1-0 against Coca-Cola, but we’re not calling time on this match yet.