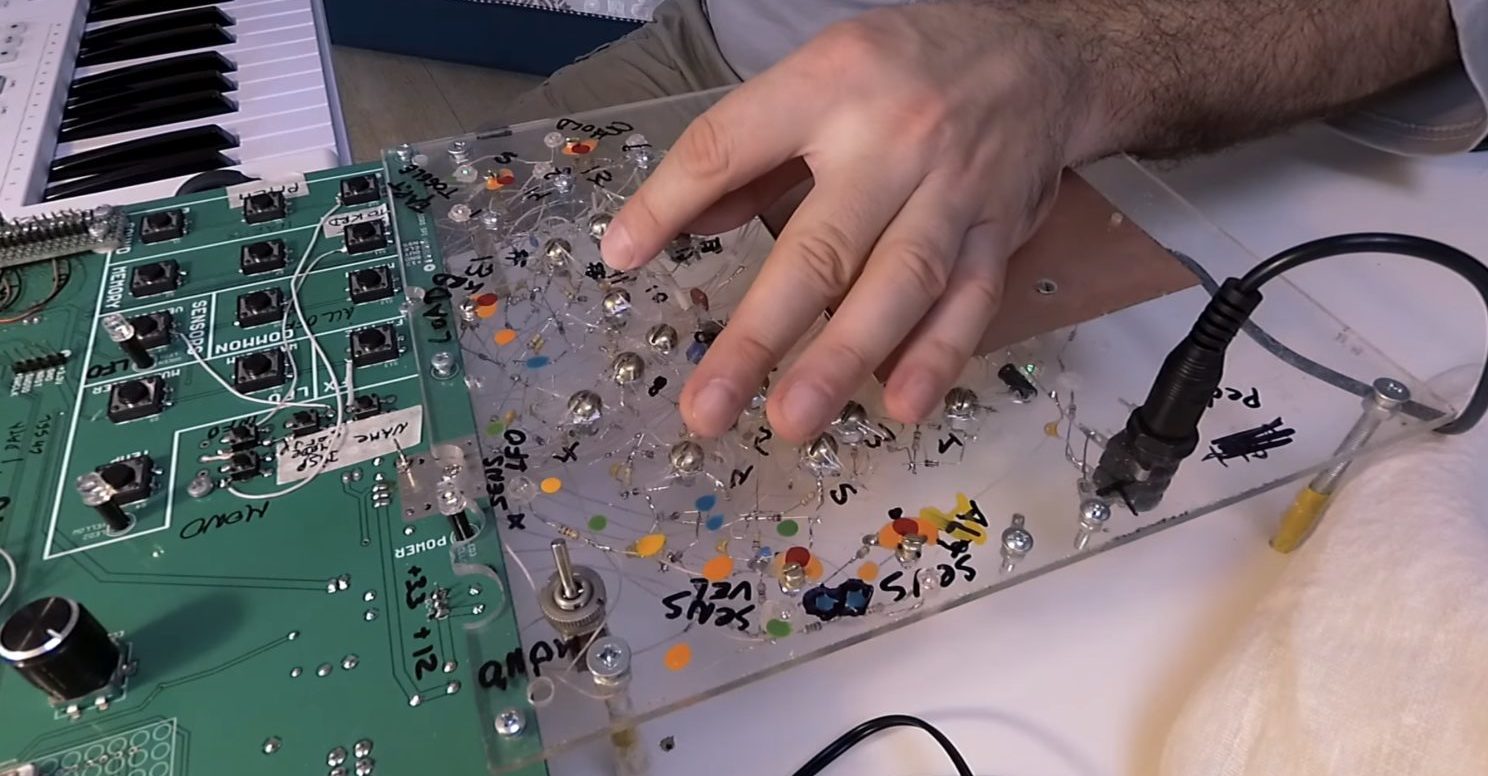 SOMA Laboratory, creator of unique instruments like the Lyra-8 Organismic Synthesizer and the Pulsar-23 Drum Machine, shared this sneak preview of the REFLEX, an instrument that promises to let you play synthesizers in a completely new way.

For most synthesizers, you create a patch and then you play it. The core idea of the REFLEX is to give you an unparalleled level of real-time control over both timbre and sound, so that you can create new timbres as you play.

Here’s what developer Vlad Kreimer has to say about it:

REFLEX is the first complex synthesizer where the main goal is to give musicians direct access to the synthesis core, instantly playing dozens of synthesis parameters as artistically and intuitively as we play notes and velocity on, for example, a violin.

To make this possible a unique multidimensional sensor-controller was developed. The main part of the sensor-controller consists of 16 small hemispheres, arranged ergonomically in a way that provides comfortable and simultaneous access to all of them for the fingers of your hand.

Each hemisphere contains a tiny version of a high frequency transmitter-air-receiver chain, where the human finger functions as a kind of obstacle that affects the connection. It captures the position of your palm and fingers from 16 points of view. The sensor data collected by each hemisphere is connected in a smart way with one or more synthesis parameters. Combinations of several sensors can be processed in a separate way and attached to a unique set of synthesis parameters.

Sensor output is processed at a speed of 23 kHz, which is higher than the audio range, and reaches the synthesis core with latency of no more than 50 microseconds. Tiny movements of your fingers can drive the very synthesis core, letting you play with the process of synthesis directly and instantly.

To make this approach possible, special synthesis algorithms were developed that I call “pure math synthesis”. The main idea of this type of synthesis is the absence of any wavetables, samples and anything that is a kind of “frozen past”. Instead, it uses special dynamical recursive equations and high-resolution calculations that generate sound here and now, and which are very sensitive to even the tiniest signals from the sensor-controller. As a result, it gives you the unique experience of playing a very complex but also very responsive live real musical instrument that literally breathes under your fingers.

The hardware part of REFLEX is also unique. Starting the work on a digital synth I was very concerned with how to bring our beloved analog LYRA-like sound quality into the digital realm. Existing digital-to-analogue converters available in industrial volumes did not meet our demands. So I decided to develop my own conversion system. It works with several Pulse Width Modulators with direct raw outputs, scaled relatively to each other in order to gain the necessary resolution. At the end, there is a special analog part that finalizes the signal. This analog part is built with discrete through-hole components and discrete transistors (there are no OPAMPs in the circuit!) without significant long negative feedback loops (the famous Hi-End approach). The analog part uses unique germanium transistors and WIMA capacitors that give warmness and nobility to the sound.

REFLEX is also a multiprocessor system where each of the six voices is actually a separate mini computer (a special dedicated high-performance microcontroller) with its own clock crystal and analog part. REFLEX has no global FX but instead six separate FX units built in each voice, each of which can be driven according to the current state of its voice and the note it plays. Each FX unit also takes part in the synthesis of its voice including complex feedback.

The end result of these innovative solutions is a very high sound quality, actually rare for a digital instrument. The analog mixing of voices output makes it possible to hear and distinguish each note as brightly and as separately as in old analog synthesizers because each note actually is generated by its own complete monophonic synth.

From the user interface side, REFLEX strikes the perfect balance between amazing possibilities and simplicity. Despite the big underlying complexity of this synthesizer, it is surprisingly easy to use. There are just 17 analog-style knobs with fixed functions (no multifunctional knobs). There is no menu diving. Everything is as simple as possible, letting you focus on making and playing music!

The SOMA REFLEX is still in development – but it’s clearly going to be one of the most innovative approaches to synthesis in a long time.

Check out the SOMA REFLEX sneak preview and share your thoughts on it in the comments!