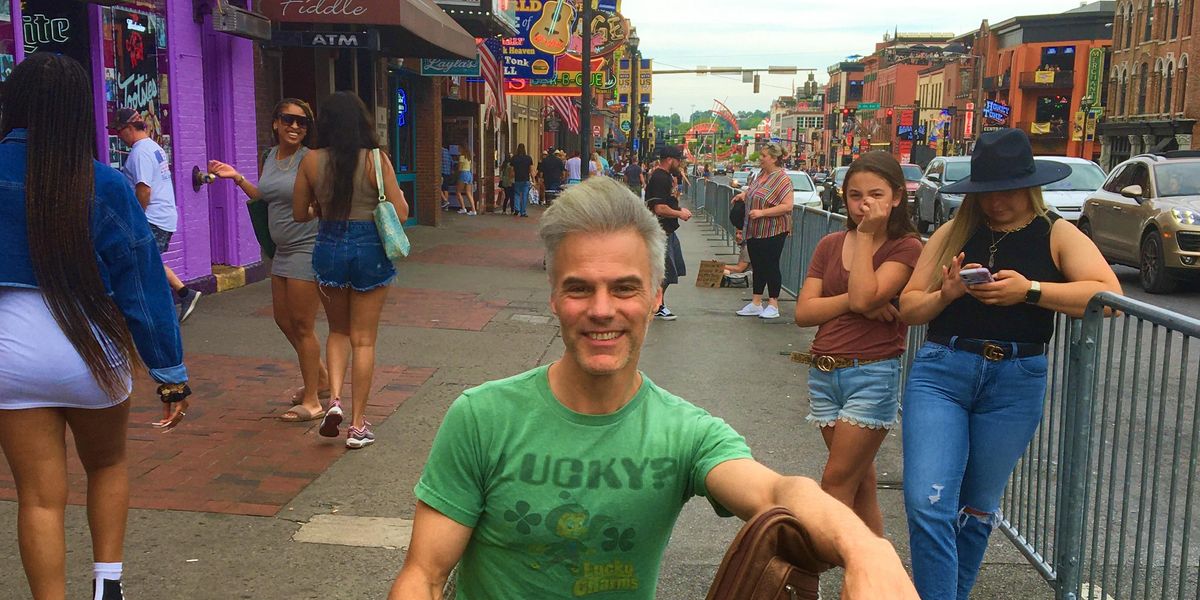 Within Nashville’s club scene, there are roughly 100 stages crammed into 40-plus clubs stacked side by side along and around lower Broadway. Every day, these bars run four consecutive, four-hour sets of live music starting at 10 a.m. and ending at 2:30 a.m. One band stumbles off and the next group is up and playing in as little as 15 minutes. The music and chaos never stops.

For Broadway musicians, it’s as organized as a freshly stamped-on ant colony. There are frequent double-bookings, last-minute cancellations, and changeups. Sometimes a player doesn’t show and a replacement is recruited on the street or from the band just leaving. I’ve been onstage when the cops arrested a singer who then left the stage in handcuffs, kicking and screaming. I’ve seen players pass out mid-performance. I’ve seen fights break out onstage and work their way into the crowd. Speaking of crowds, last week a man removed his full colostomy bag and swung it around his head during a friend’s gig. It’s a shit show.

Although the attrition rate is high, I’ve been playing these clubs for over two decades. There’s never been a set schedule. I get a text and go if I’m available. Last week, I played five gigs in four days, which included a double shift on Saturday (2 to 6 p.m. on pedal steel at Johnny Cash’s, followed by 6 to 10 p.m. on guitar at Tootsie’s). There are no breaks, no soundcheck, no setlist. You’ll be onstage with some of the best and worst musicians you’ll ever play with. The gigs are fun, frustrating, grueling, rewarding, good for you, and bad for you. Here’s the scoop.

Base pay in clubs ranges from $30 per player on the low end to as much as $150. That dough is augmented by tips that can run between zero and as much as $500 per person if an extravagant fan throws in big. Musicians usually walk with about $100, but there are times you’ll be earning less than minimum wage at the end of four hours. Yes, this is exploitation, but the clubs know that if a musician grumbles, there are hundreds of players in line hoping to be exploited. I am one of them.

All of the clubs have a PA, sort of. There are usually floor wedge monitors and often offer options for in-ear monitors. If you want to go full nerd, some clubs allow you to log on with your phone and adjust your own mix. The clubs will provide mics but bring your own—some house mics are as clean as a bar’s bathroom floor. Sometimes they mic your amp, sometimes you just blow and go.

“For Broadway musicians, it’s as organized as a freshly stamped-on ant colony. There are frequent double-bookings, last-minute cancellations, and changeups.”

Clubs all have a house drum kit—some rough, some surprisingly good. Drummers bring their own snare, cymbals, and kick pedal. Usually a bass amp is provided. Some spots like Tootsie’s and Rippy’s have backline guitar amps (solid-state Orange Crush Pro CR60C). Honky Tonk Central has a nice Marshall with a slant 4×12. I always opt for the house amp, to travel as light as possible. I bring one guitar and a modest pedalboard crammed into the front pocket of the gig bag, with extra strings, a slide, cables, and a capo stuffed in the other pocket. When I carry an amp, I usually use my Boss Katana. It’s light, loud, and has built-in drive and effects if my pedalboard goes down. Downtown power is glitch: I’ve fried two tube amps down there. No cork-sniffing gear here.

Parking is expensive and inconvenient, but the Nashville Musicians Association Local 257 gives vouchers to members for $5 parking at a downtown garage. Some clubs offer parking vouchers for players. Most players who have a lot of gear schlep it on a hand truck/dolly. Post-pandemic lockdown, the sidewalks are crammed with tourists. It’s slow going when you’re hauling gear behind a gaggle of bridesmaids teetering on high heels, but that’s the gig.

If you want to jump into downtown Music City gigging, go to Broadway and spend a few nights listening to bands. Then go to the Spotify playlist The Sound of Lower Broadway, which currently has 264 songs that you’ll likely be asked to play. Bands try to cover all requests from a good tipper. You’ll need to know the old-school country classics as well as classic rock, modern country, and current pop/rap hits. There will be embarrassing train wrecks. Get on Facebook and check out Nashville Gig Finder and local musician community pages, where you can find people looking for players. Gigs lead to gigs, if you play well with others.

There are some downsides. That loud environment destroys your ears. There’s a physical toll to these gigs. Hold a guitar for four to eight hours after hauling your gear and you’ll wake up feeling like you’ve been beaten with a bag of doorknobs. And yet, I will play these gigs as long as I get the call, because players only love you when they’re playing.