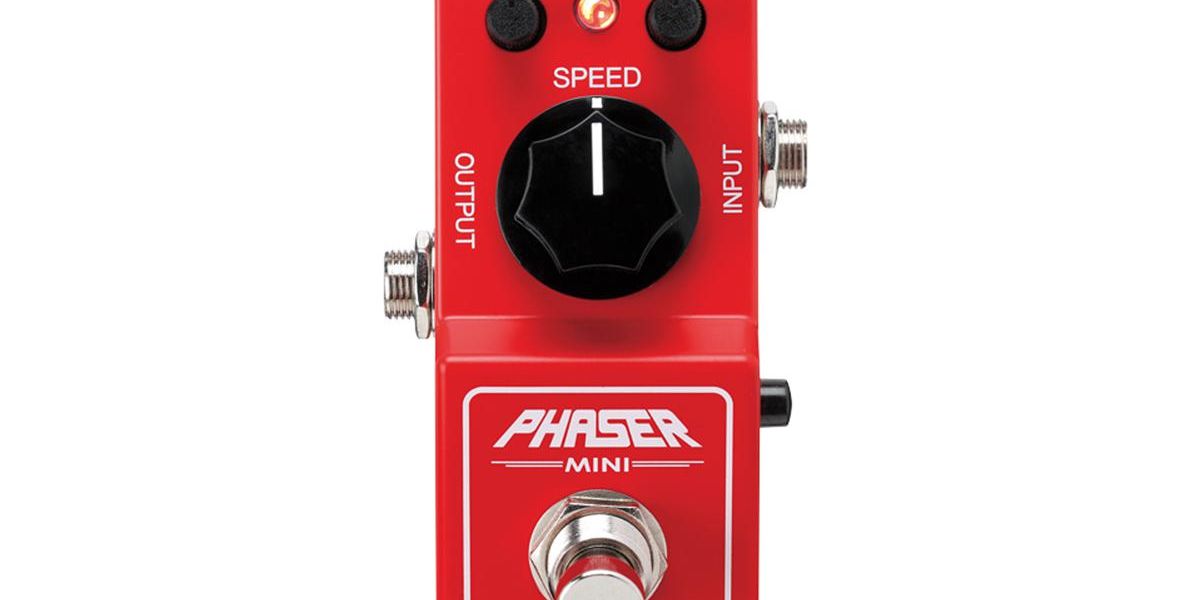 Ibanez has an unusual phase legacy. While they never built a phaser as wildly popular as MXR’s Phase 90 or Electro-Harmonix’s Small Stone, they issued memorable and innovative swirl devices—from the outlandish FP-777 Flying Pan to the simpler, more utilitarian PT-999, PT-909, and PT9.

Tiny dimensions aside, Ibanez’s new analog Phaser Mini outwardly pays homage to the latter two pedals, which emerged from the Maxon-built “0” and “9” series pedals from the late ’70s and early ’80s. As on those phasers, tones are shaped by depth, feedback, and rate controls. The Mini also riffs on the PT-909’s elegantly hip enclosure shape and graphics. Unlike the blue 909, the Phaser Mini is an orange-red that’s closer to the PT9. (Yes, color matters on pedals that look this cool!) In a more practical deviation from tradition, the Phaser Mini also features a switch that selects 4- or 6-stage phasing—adding an extra-warpy dimension to the smooth 4-stage foundation that propelled the PT-909 and PT9.

When the Phaser Mini’s closet relatives the PT-909 and PT9 first appeared, the 1-knob MXR Phase 45 and Phase 90 and the 1-knob/1-switch EHX Small Stone ruled the roost. Ibanez had even built a 1-knob phaser of its own in the form of the PT-999. The appeal and design motivation behind the older 1-knob phasers is obvious. They were simple to use and build. (It’s probably also safe to assume that many psychedelicized phaser users in the 1970s were ill-equipped to operate much more than a single knob.) Ibanez probably saw opportunity in a phaser offering a little extra measure of control. They might have also heard the intense colorations of Mu-Tron’s Phasor III and wondered if there was a way to deliver that pedal’s wiggly, wobbly potency for less dough. Whatever the motivation, the 3-knob PT-909 was soon Ibanez’s flagship phaser.

Anyone who has ever listened in frustration as a phaser goes missing in a mix will love the Mini’s propensity to stand out proudly via its pronounced treble peaks.

The Little Guy Speaks Up

Like the original PT-909 and PT9, the Phaser Mini doesn’t offer worlds of additional control—at least not by the standards of today’s super-tunable boutique phasers. But the depth, feedback, and 4/6-stage switch open up the tone palette considerably and generate aurally striking phase textures.

One of the Mini’s most ear-grabbing attributes is its slightly less transparent voice. Compared to a favorite vintage Phase 90 clone, for instance, the Ibanez adds more coloration to fundamental guitar tones. It often sounds relatively bright and bigger in the bottom end compared to other analog phasers, and it can feel extra-sensitive to drive from hotter or trashier pickups like P-90s. This isn’t necessarily a bad thing. These slightly overdriven shades add a compressed cohesiveness to the output. And anyone who has ever listened in frustration as a phaser goes missing in a mix will love the Mini’s propensity to stand out proudly via its pronounced treble peaks. As a result, I preferred working from the cleaner baseline tone of a Telecaster and using my guitar tone and volume knobs to taste. But if you’re less concerned with headroom for other effects or achieving optimum pick articulation, humbuckers and P-90s (particularly in the bridge position) can lend a thrilling, brash Band of Gypsys tonality and attitude to the Mini—particularly when you add the extra warp of the 6-stage voice. Church of Gilmour-goers will probably prefer a cleaner phase that lets more transient tones shine through. More agnostic aspiring Jonny Greenwoods, Graham Coxons, and Kevin Parkers will dig the less immaculate swirl.

While phase is an essential effect for heavily psychedelic players and many Hendrix and Gilmour devotees, a lot of guitarists use it as an occasional splash of bold tone color. The Phaser Mini is a practical, compact, and colorful solution for players that use the effect more occasionally. It offers a lot of characterful analog modulation flavors in a small package, including very classic, go-to textures for Floyd and funk. For those less bound by tradition, the Phaser Mini is a distinctive alternative to the most prominent phaser types and the many upmarket clones that mimic their tones.