How Moog Brought Usability To Synthesizers

At UX Collective, a publication that focuses on user experience and product design, designer Mateo Nava has shared an interesting look at How Bob Moog brought usability heuristics to the electronic synthesizer. 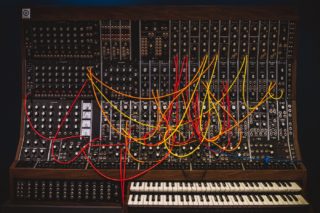 The article looks at the design of the Minimoog Model D, the design decisions that were made in translating the Moog Modular into a portable keyboard and how the Minimoog has influenced later designs.

Upon its release, Moog’s Minimoog condensed a significantly complicated instrument down to a considerably smaller format that could be more easily adopted by musicians. Unlike its predecessors, which seemed to tailor their designs for electrical engineers and specialized scientists knowledgeable of electronic sound synthesis, Moog’s design started with the user first.

Even Moog himself touches on this in the context of his process saying, “Artist feedback drove all my development work… The point is that I don’t design stuff for myself. I’m a toolmaker. I design things that other people want to use.”

Through unique design choices such as the implementation of pre-wired modules that eliminated the need for manually patching sound signal paths (which add friction for the user), clear visibility of system status as evidenced by knobs and switches, and the invention of the pitch wheel, Bob Moog introduced a design interface in the Minimoog that would become a roadmap for electronic instrument designers to follow.

As a result, Moog would not only define generations of musical instruments through an enormously successful instrument design but, in doing so, also leave a lasting impact on a plethora of musical styles: an object-lesson for the way in which experience design spills over into many facets of our culture.

Note: While article is an interesting read from a design perspective, it credits the Minimoog design to Bob Moog, leaving out Bill Hemsath, who created the original Minimoog design, and the team that developed Hemsath’s idea into what became the iconic Minimoog.