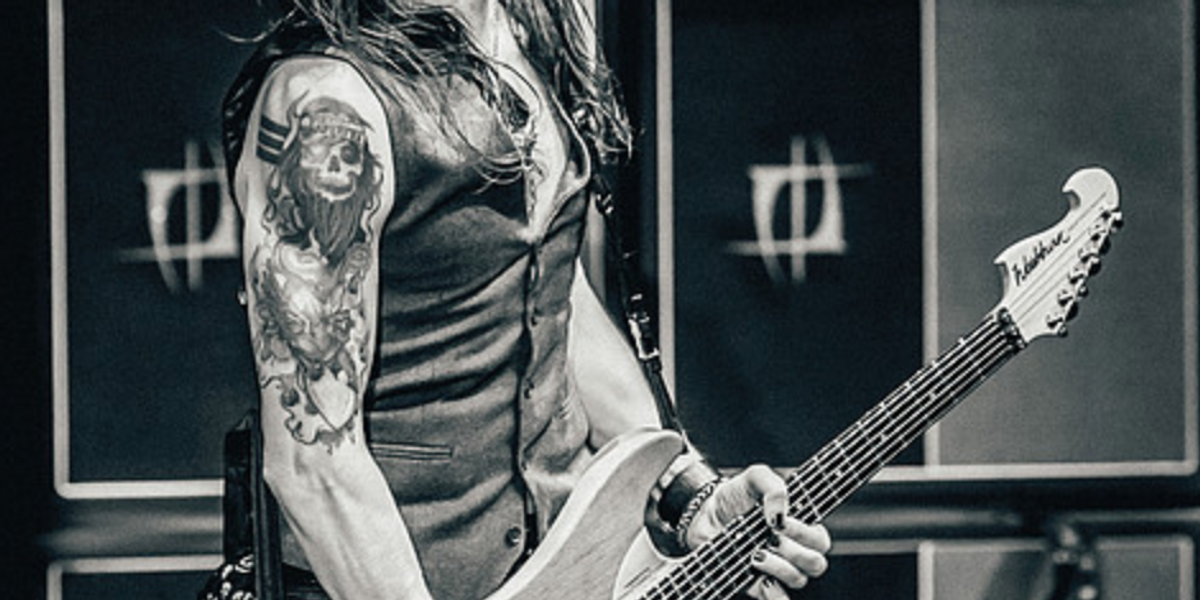 This lesson is all about shred guitar—specifically Extreme axeman Nuno Bettencourt’s inventive approach to tapping arpeggios. Let’s jump right in.

Nuno Bettencourt’s work with Extreme is chock full of shred ideas to cop. Especially his solos on “Get the Funk Out” and “He-Man Woman Hater.” Throughout this lesson I will pick apart these solos and give tips on how to develop speed, accuracy, and most importantly your own voice.

Let’s start with tone. You’ll want a good amount of gain when playing these licks, so the tapped notes pop out nicely. However, if you already have a strong tapping technique, experiment with lower gain sounds, or even a clean sound. That’s an important step in developing your own voice as a player. Even if you can’t match the volumes between both hands, you might actually like it when not all notes have the same volume. It can create interesting accents and a more dynamic sound.

If you have trouble bringing any of the examples up to speed, analyze where the problem occurs. Is it a string change? A weak hammer or noisy pull-off? Pinpoint the problem and focus on practicing that bit in isolation. Once you get up to faster tempos try to think in note groupings rather than individual notes and focus on the notes that fall on the beat.

Let’s get on with Ex. 1. Nuno’s trademark tapping lick is a straightforward C major arpeggio (C–E–G) with an added 9 (D). Learn to visualize the shape of the arpeggio that the lick is based on, that way you can easily transpose it to fit whatever context you want to use it in. In “Get the Funk Out” Nuno squeezes in a few extra notes during the ascending part in order to make the next repetition of the lick start on the beat. Keep an ear out for that one.

Ex. 2 shows a similar figure that shifts the accents around by using triplets. Nuno sometime doubles a pattern on a string or slightly changes the it–like skipping the hammer-on from nowhere on the lowest string at the end of the pattern–to land a certain note on the beat. This comes in handy when playing these arpeggios over changes while shifting the accent around.

Since we’re taking about chord changes, let’s apply these arpeggios to a chord progression in Ex. 3. Note that Nuno often plays these major arpeggios leading into non-diatonic chords which adds funkiness. In this exercise we’ll move through the circle of fifths before working our way back towards the key center, which is A. To create a climax, I start this lick using triplets and then go into full-shred mode on the last few measures using 32nd notes.

Now that you’re familiar with Nuno’s style of tapped arpeggios, how can you take these ideas and implement them without sounding like a Nuno rip off? We can start by using more than major triads.

Ex. 4 shows an Cm(add9) arpeggio (C–D­–Eb–G) and a C diminished triad (C–Eb–Gb) with an added b9 (Db). You can create dark and interesting sounds that would fit in more extreme metal styles, but also prog-rock settings that want to push into different harmonies.

In Ex. 5 I used arpeggios to outline a more pop-flavored progression. This could be used in conjunction with a more synth-like sound to create arpeggio layers in the background of a pop song.

Ex. 6 focuses on minor harmonies to bring out more of a C Phrygian (C–Db–Eb–F–G–Ab–Bb) flavor.

The next step after exploring different harmonies is to switch up how we play through these arpeggios. Ex. 7 demonstrates how to move this pattern through different tonalities. It creates a very intervallic, more prog-rock sound. I recommend you take this idea and apply it to the different arpeggio shapes from Ex. 4. Play around with the fingerings a little bit and see what’s most comfortable for you.

Ex. 8 takes this idea and applies it to a classic rock chord progression. I put it in a 6/4 meter and use a staccato rhythm pattern to give it a modern progressive feel.

Feel free to experiment with different sequences and see how they sound. Take a simple lick or idea like Nuno’s tapping arpeggios and play around with them. If you change the harmony, rhythm, or sequencing it can lead to interesting new ideas that will make you sound more like yourself.