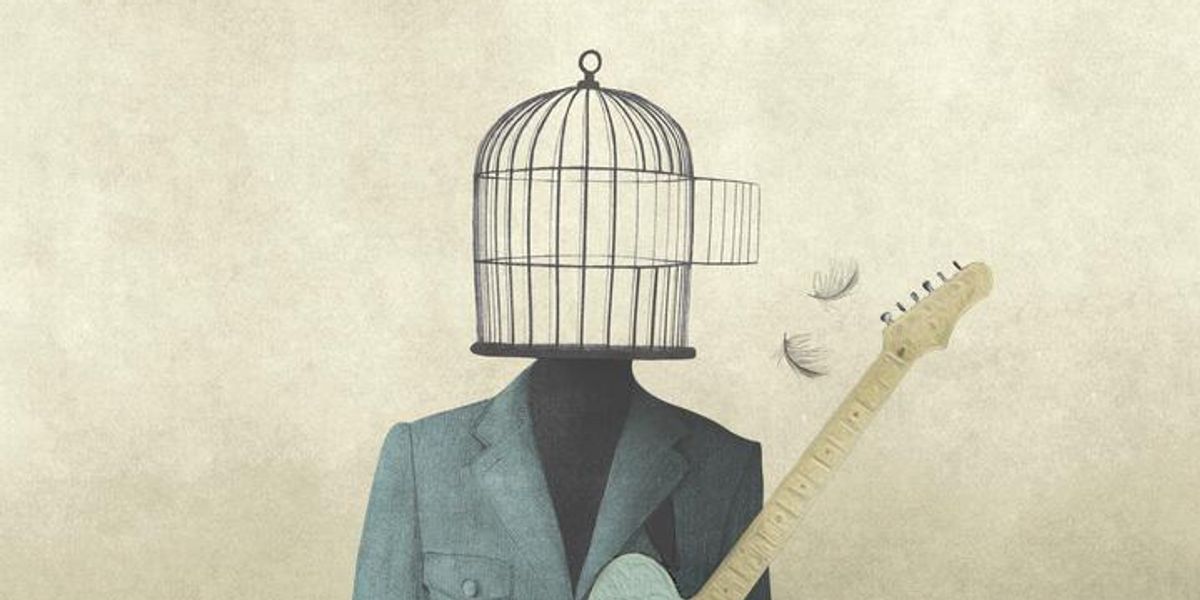 Do you feel confined within the same scale shapes or set of frets every time you go to rip a solo? If so, this lesson is for you. Or, if you’re confident in your ability to move both horizontally and vertically around the fretboard, this lesson might help you to see the fretboard even better.

Most people think of the CAGED system as a way to play different shapes of the same chord up and down the fretboard, but it’s even more useful when thinking in terms of scales. If you’re unfamiliar with the CAGED system, hit up PG‘s in-depth guide here. Today, we’re not focusing on memorizing scale positions, but rather on how to weave shapes together in order to navigate the guitar neck. The examples can be used as licks, but overall, this is meant to be more of a roadmap than an itinerary.

Ex. 1 does nothing more than play a four-note grouping from the G major scale (G–A–B–C–D–E–F#) in different octaves on different strings. Using the 7, root, 3, and 4 of the G major scale in an ascending fashion, I navigate the fretboard vertically using the CAGED system as my shell.

I start in the “G” position, and work my way through the “E,” “D,” “C,” and “A” positions, which lands me 12 frets up from where I started, but on the opposite side of the fretboard. This example is the same idea behind the rudimentary exercise many of you might have learned early on when finding and memorizing all the octaves and fretting positions of a single note across the entire fretboard.

In Ex. 2 I show you an idea that works well as a triad-based lick, but really is a tool that ties together positions of the CAGED system by putting the 3 of each chord position on the bottom of each triad (also known as first inversion). In this case we’re working in the key of E, meaning that there will be a G# on the bottom of each triad. In terms of CAGED positions this example starts with the “E” position and continues until you are back in the “E” position 12 frets higher. To finish the lick, the “E” and “D” positions are repeated 12 frets from where we started. The “G” position isn’t forgotten. I like to think of the “A” position with a 3 on the bottom the same as the “G” position with the low root omitted. This line of thinking makes for a bit more efficiency and fluidity.

In Ex. 4 we begin to stretch our perception of the CAGED system. We’re playing the E minor pentatonic scale (E–G–A–B–D) but using the CAGED system to navigate the fretboard using the relative major shapes of G major. To ease the learning curve of this method, we’re only using the 1st and 2nd strings. If you’re unclear about the theory behind relative majors and minors, it’s relatively simple. (See what I did there?)

Any major scale will share the same notes as a minor scale based on a root a minor third below. For example, if you were to play a G major scale and an E minor scale (E–F#–G–A–B–C–D), the notes would be the same.

This might take a moment to wrap your head around, but once it clicks it’s like a magic key that unlocks previously hidden areas of the fretboard.

In Ex. 5, I take what we learned in Ex. 4 and apply it to all 6 strings. It’s the same idea of using the CAGED system alongside the G major/E minor scales to create a highway vertically on the fretboard. Again, fingerings don’t make a ton of difference here–fluidity and accuracy do.

The CAGED system is widely understood but also widely underutilized by many guitar players. Combining relative major scales and the CAGED system can be like Bradley Cooper taking the pill in Limitless–except this brain hack exists in the real world and you can have it too. Use this lesson not as a guide to hot licks, but rather as a tool to build your own connections across six strings and 20-something frets.