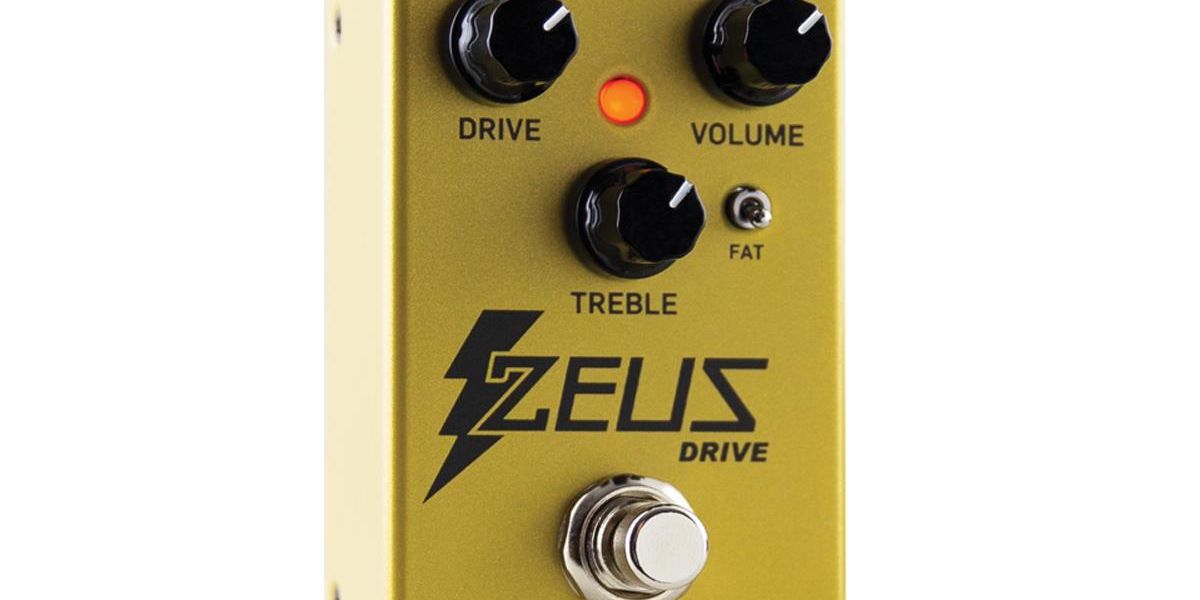 There’s no shortage of lower-priced pedals vying to match the overdrive characteristics of the Klon Centaur. That’s no surprise. When Klon founder Bill Finnegan started building his legendary stomps again in 2019, his first new 3-knob wonder auctioned for more than $2,000, and used first-generation Centaurs now fetch $5,000 or more. That’s pretty exalted. But pedals like the J. Rockett Archer and the Wampler Tumnus allow us less affluent folks a taste of this sacred dirt for under $200. (For more, see Joe Gore’s “Klon vs. Klone: 5 Affordable Stomps Go Head to Head with a Gold Original” in the April 2020 issue of PG.)

At just $69, the TC Electronic Zeus Drive is an audacious new competitor. It’s got the classic 3-knob Klon/clone array of drive (or gain, on the original), treble, and volume (output on the Centaur), augmented by a fat boost toggle to thicken up the low mids. The Zeus is small and appealingly designed, with ¼” in/out jacks and its 9V DC barrel-style input (no battery option) mounted on the crown of its sturdy, golden 2.2″ x 2.2″ x 3.9″ metal enclosure. The knobs are solid, well-spaced for quick adjustments, and the circuit is switchable from true bypass to buffered, thanks to an internal DIP switch.

Like the Klon, the Zeus’ drive section is all analog and sports a pair of 1N34A germanium clipping diodes. TC’s pedal also uses a charge pump to steps up the 9V DC and increase headroom and dynamic response. And there’s one more trick—the dual-ganged pot optimized the balance between clean signal as you add dirt to preserve your tone’s core character.

While I don’t own a Centaur, I’ve had an Archer on my pedalboard for years. So it seemed natural to A/B the Zeus with the Archer, paired with guitars bearing single-coil, P-90, and humbucking pickups, all plugged into a Carr Vincent with its three EQ knobs at noon, the drive off, and the volume and reverb at 10 o’clock. Like the Archer, the Zeus responded expressively to shifts from light to heavy attack for both single notes and chords, baring its teeth when I dug in. It also stayed articulate while adding dirt to all three flavors of pickups.

There’s a nice range to the Zeus’ gain and volume, although it’s not as wide or darkly gritty as the Archer’s. Its treble control— well, it does brighten up the pedal for times when you might need to really cut through in a mix or onstage, and it can lift a guitar with dialed-down tone pots to screaming highs as needed. But the pedal’s inherently bright, transparent nature may also be a pitfall for some players. When I step on a stomp, I’m looking for a little more transformation—and in an overdrive, for me that typically includes a more sculpted, robust, mid-saturated tone along with an enhanced response to chord-hand nuances and dynamics.

“The Zeus responded expressively well to shifts from light to heavy attack for both single notes and chords, baring its teeth when I dug in.”

Without the fat boost engaged, the Zeus’ transparency was evident, but it could sound a bit thin, making the boost more a necessity than an option, to my ears. With the boost on, and minor adjustments to the treble and drive controls, I was able to get tones closely aligned with the more costly pedal. And that’s saying something!

When I had the boost on and the Zeus dialed in to my liking, both low-gain (drive at 8 or 9 o’clock, volume at noon, and treble at 1) and high-gain settings (drive maxed, volume at 10, and treble at 2 or 3) had the vibe of natural amp breakup. Edging the drive to noon generated singing sustain, nudging my Carr ( running at just 7 watts), into old-school Marshall territory. At 35 watts, the distortion was downright pushy.

Want to enter the Klon-tone ballpark at a bargain price? The Zeus Drive could be your ticket. It’s easy to control and adjust on the fly, solid as a brick, and responsive to nuanced playing, even when it’s cranked. And with the fat boost engaged, the Zeus’ sound is as portly and bold as more expensive klones, and that’s pretty sweet.