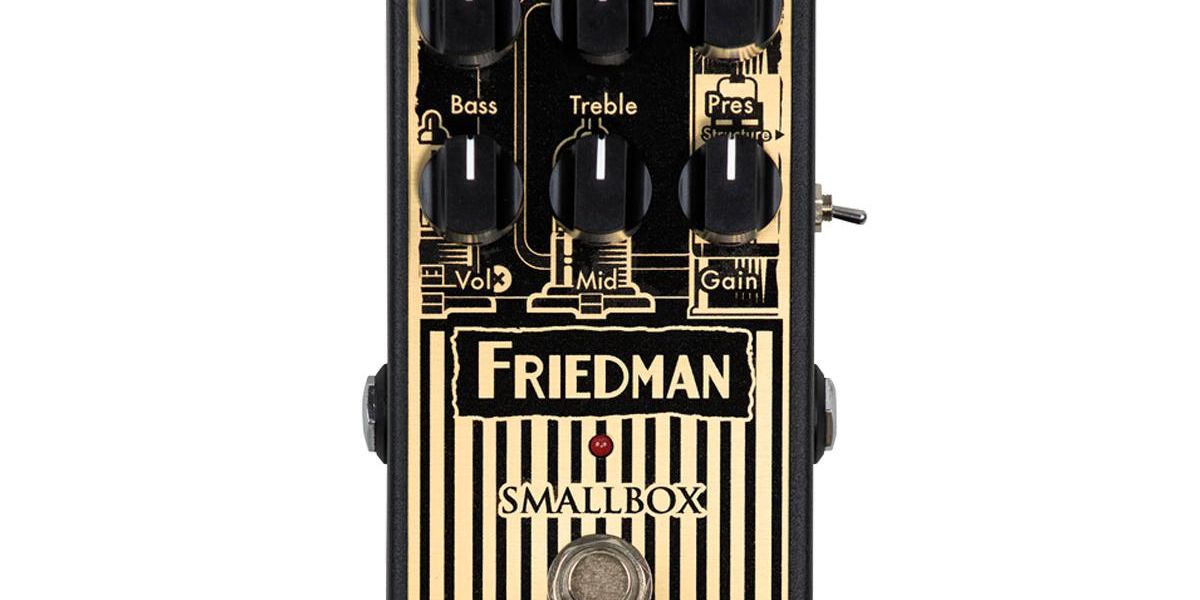 The Marshall-in-a-box stompbox format is so popular at this point that it seems like almost every prominent pedal maker builds one—each of which purports to deliver the sound and dynamics of a classic Marshall in enclosures that would barely accommodate an EL34 power tube from the real deal.

Friedman’s take on the Marshall-in-a-box is a transistorized spin on the maker’s own popular interpretation of a modified plexi: the 50-watt, all-tube Small Box head and combo. Of all the amp builders that make plexi-style heads, Friedman’s are among the most highly acclaimed. Does the pedal version have the same magic?

The knobs on the top of the compact 4 ½” x 2 ½” x 1 ½” metal box are the same controls you’d find on a single channel of the Small Box amp. The control order is shuffled around a bit compared to the amp, but gives you the means to control gain, mids, volume, presence, treble, and bass.

There’s also a gain-structure toggle switch on the side to replicate the amp’s two channels. The down position voices the pedal as a cleaner vintage plexi; the up position takes on the qualities of a modified high-gain plexi. Switching is true bypass, there’s a small red LED indicator light to signal on/off status, and the pedal accepts an external center-negative power supply that can run on voltages from 9V to 18V DC. There is no 9V battery option.

The touch and feel are great, and you can barely get a bad sound out of it, whichever way you turn the knobs.

I’ve owned and gigged with a Friedman Small Box amp head for about four years, and its sound and feel are now very familiar. So I was a bit surprised at how effectively the Small Box pedal delivered me to so many of the same tone destinations, albeit via a different expressway. Playing a Les Paul and a Novo Serus J with P-90s, I used the Small Box with a variety of amps: a tweed Deluxe-style 1×12 combo, a black-panel Fender Bassman head and 2×12 cab, and a Friedman Mini Dirty Shirley 1×10 combo with its voicing switch on low gain. Obviously any type of overdrive pedal will sound a little different through different amps. That truth applies here, too. But aside from variables in volume and the sense of mass you derive from different speakers and cabinets, the voice, character, and touch dynamics of the pedal remain remarkably consistent, and that’s an impressive start.

I’d challenge any player to plug this into a quality clean-ish amp, dial it in to taste, and not be impressed with the way it captures our contemporary perception of a juicy, dynamic, and ultra-satisfying plexi-inspired lead or rhythm tone. It excels at chunky, beefy crunch. The mid-gain blues drive is rich. Saturated soloing tones are available in abundance. And to my ears and fingers, it does that pedal-replicating-amp tone thing more accurately than any other Marshall-in-a-box I can think of. The touch and feel are great, and you can barely get a bad sound out of it whichever way you turn the knobs (which is typical of Friedman amps as well). It’s an addictive pedal, and ultimately it just makes you want to play.

The Friedman Small Box pedal is simply a great Marshall-in-a-box-style overdrive that provides a very satisfying fast track to plexi-style crunch and lead tones. Long story short: I’d barely put in five minutes with the thing before I started wondering if Friedman would mind if I stuck some Velcro on the bottom and slotted it right onto my own board. If it’s a Marshall-in-a-box you crave, the Small Box is a no-brainer.