From September 1, “Sacral”, an installation by Italian artist Edoardo Tresoldi will be open to the public at the Mar – Art Museum of the city of Ravenna. The work is the preview of the exhibition “An Epic POP” inside the exhibition project “Dante. The eyes and the mind”. 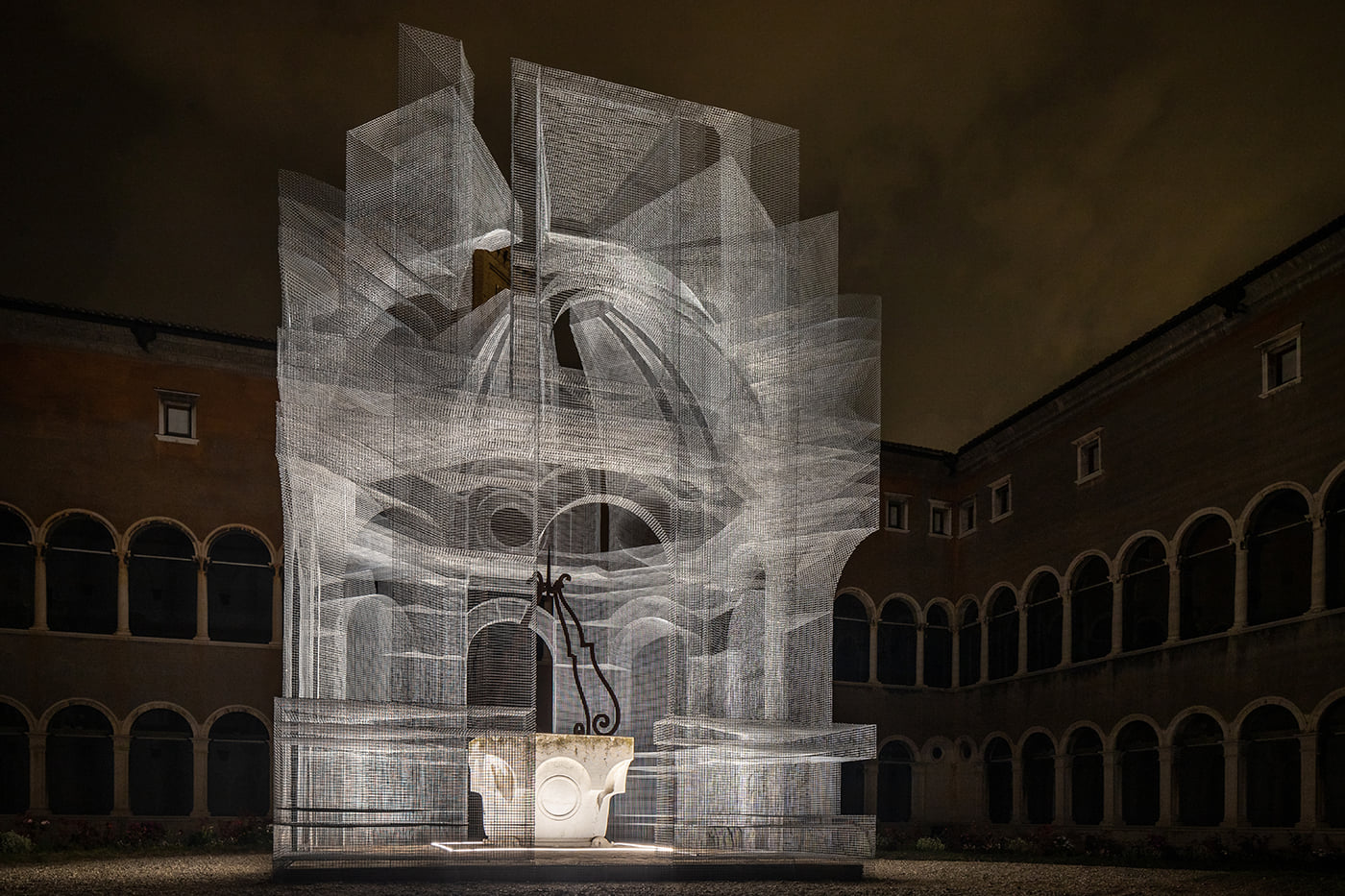 With Sacral, built in 2016 and rehabilitated in the 2016th-century cloister of the city’s Museum of Art, the audience has the chance to physically enter the work, ideally in the Noble Castle, and retrace the Divine Comedy’s journey in a quasi-performative action. 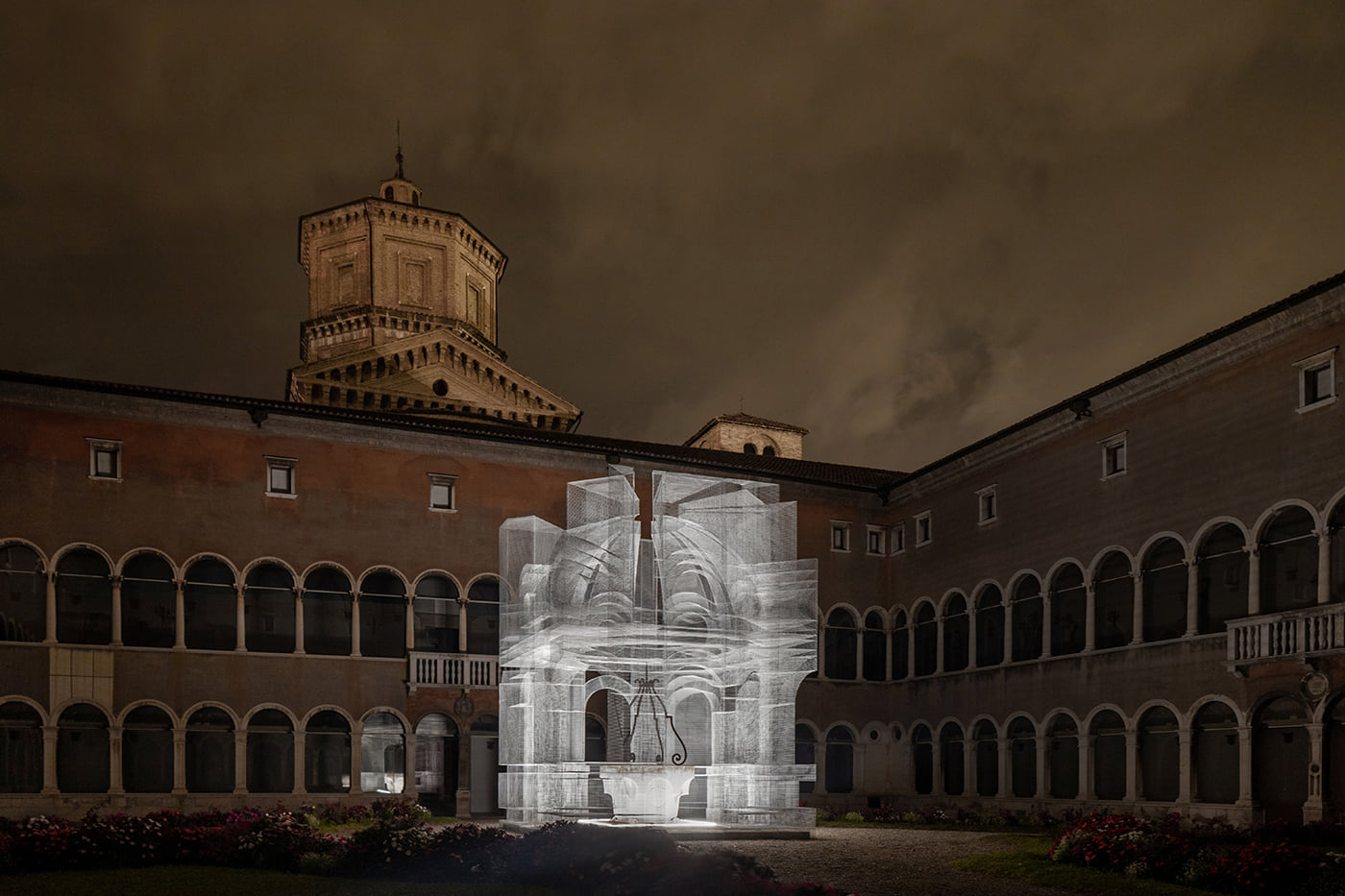 Tresoldi is the artist of “Absent Matter” and cathedrals in wire mesh. In 2017 Forbes named him one of the most influential European artists aged under 30. After his reconstruction of the early-Christian Basilica of Siponto, which won the Gold Medal for Italian Architecture, the large installation Etherea in the US for the Coachella Valley Music and Arts Festival and Opera, his work on the seafront at Reggio Calabria, he is exhibiting Sacral in Ravenna. The work was originally created in 2016 and has been set up here for the occasion. Edoardo Tresoldi was chosen by Giorgia Salerno, curator of the contemporary art section of the exhibition, to represent the theme of Souls and to create an ideal reinterpretation of the Dante’s Castle of the Great Souls with a major installation that allows visitors to have an extremely imaginative experience and to fully interact with the surrounding landscape. 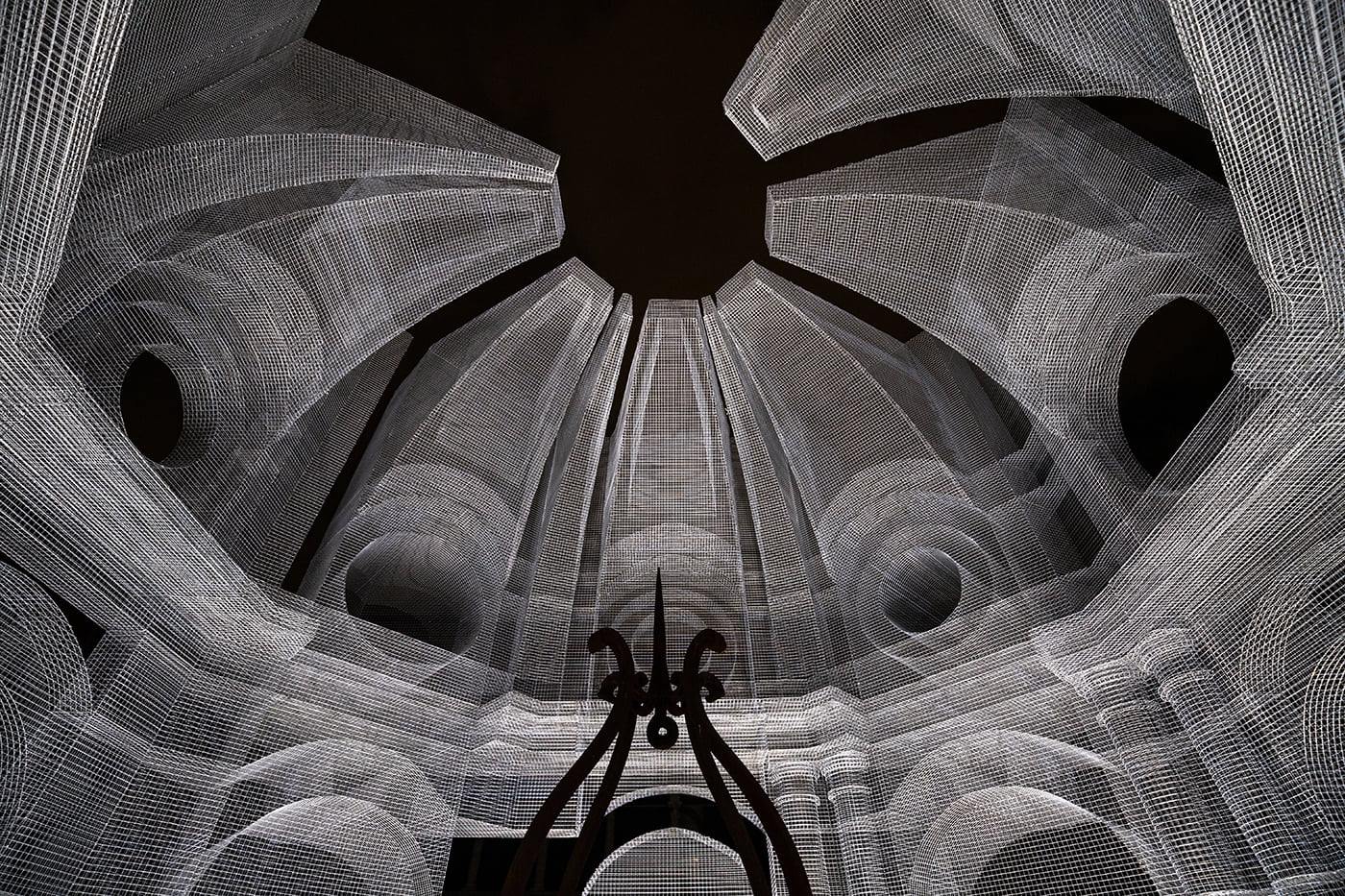 The Noble Castle, as Dante calls it in Canto IV of the Inferno, is a symbolic place inhabited by the souls of those who left honour and fame behind them on earth. They are the great souls of antiquity – philosophers, poets, scientists and writers – with grave and slow-moving eyes. People who were great in their earthly lives because of their moral qualities, but who are destined to eternal suffering because they lack the theological virtues.

Sacral has been installed in the 16th-century cloister of the city’s Art Museum, originally the canon’s monastery of Santa Maria in Porto, celebrating the Greek Madonna mentioned by Dante in Paradiso, the canticle he completed during his time in Ravenna. The work enables visitors to physically enter the work, representing the Noble Castle and, as if in a performance, to retrace Dante’s journey. 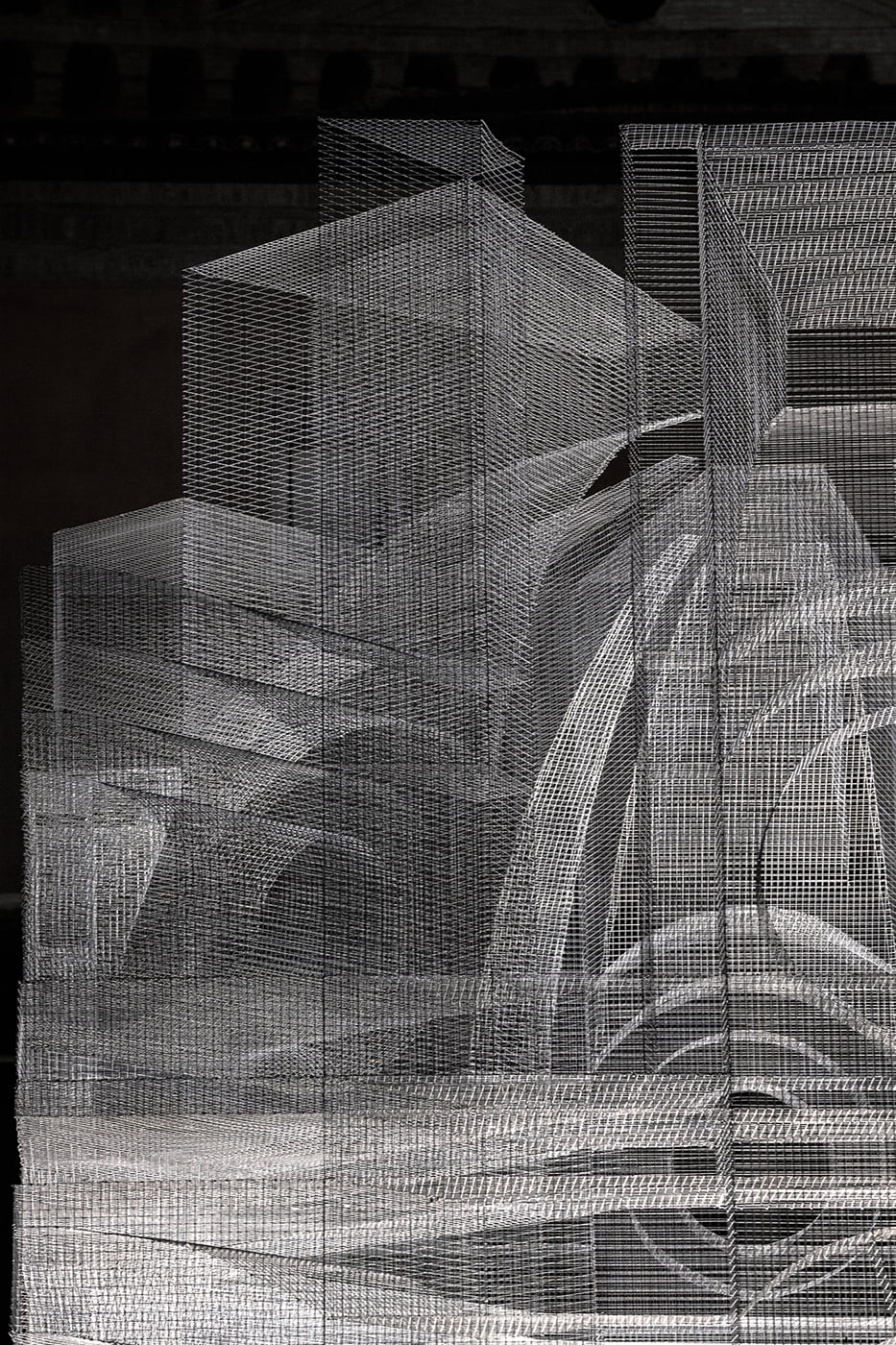 “An archetypal image”, Edoardo Tresoldi says, “is capable of creating a dialogue between past and present, using a language comprising of meanings that recur over time. In the 16th-century cloister of the MAR, Sacral acts as the memory of a somewhere we have already been, a familiar image that introduces the visitor to the exploration of Dante”.

The contemporary art section of the exhibition explores various themes in Dante, such as souls, journeys, women, dreams and light, which have been selected to guide visitors through the exhibition.  One or more artists have been chosen for each theme, to reinterpret people and place in Dante’s Divine Comedy through their work. In this way, the exhibition is a truly artistic experience of Dante and his work. 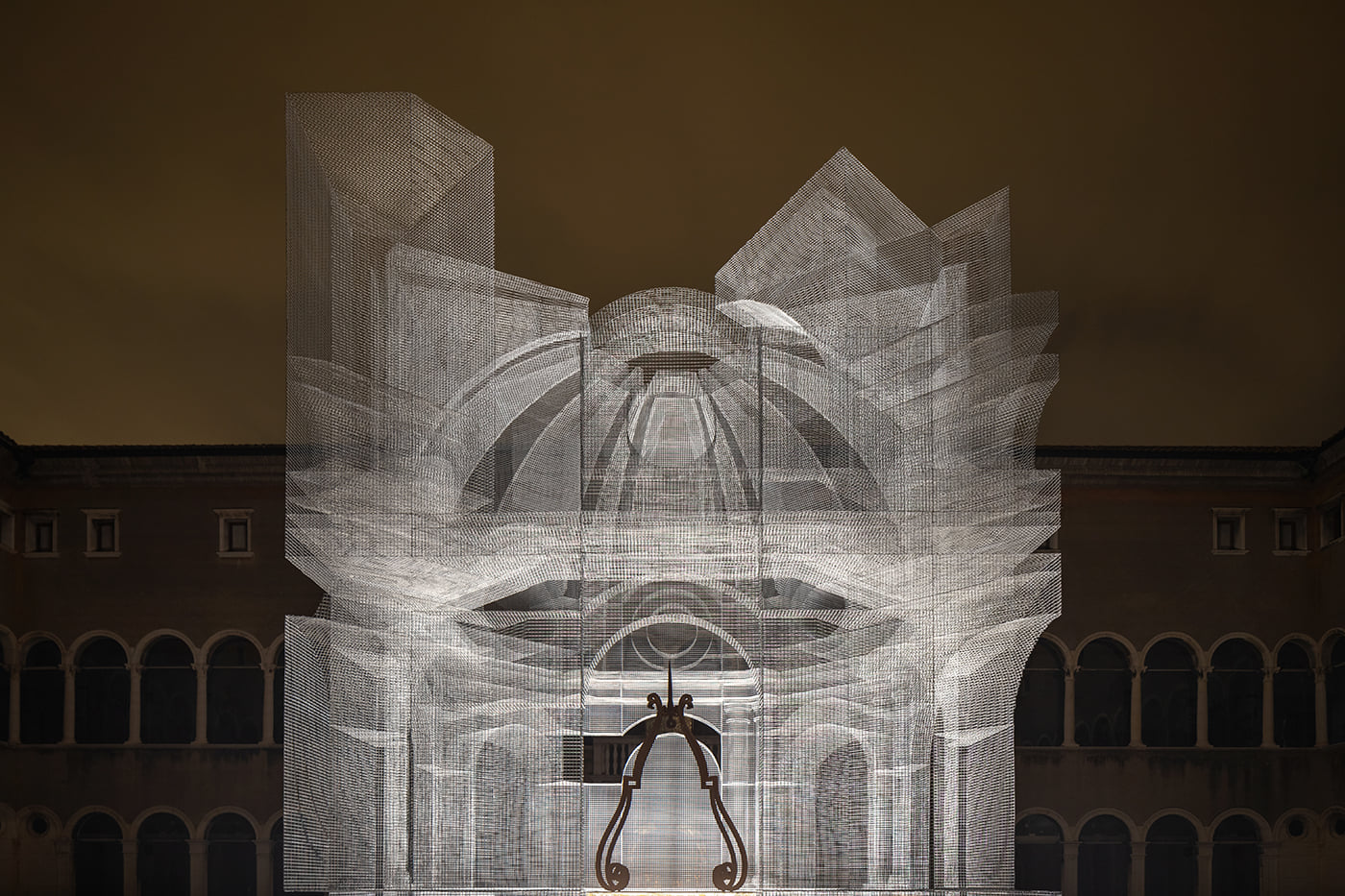 Edoardo Tresoldi is an Italian artist, sculptor and set designer , known internationally for his monumental sculptures. explores the poetics of the dialogue between human beings and the landscape, using the language of architecture as an expressive tool and as a key to reading space.

The artist plays with the transparency of wire mesh to transcend the spatiotemporal dimension and narrate a dialogue between art and the world, a visual synthesis revealed in the fading of the physical boundaries of his works.

Scroll down below to view more photos of “Sacral” installation in Ravenna.

“The Morrígan” by Luke Alen-Buckley in Leicestershire, UK