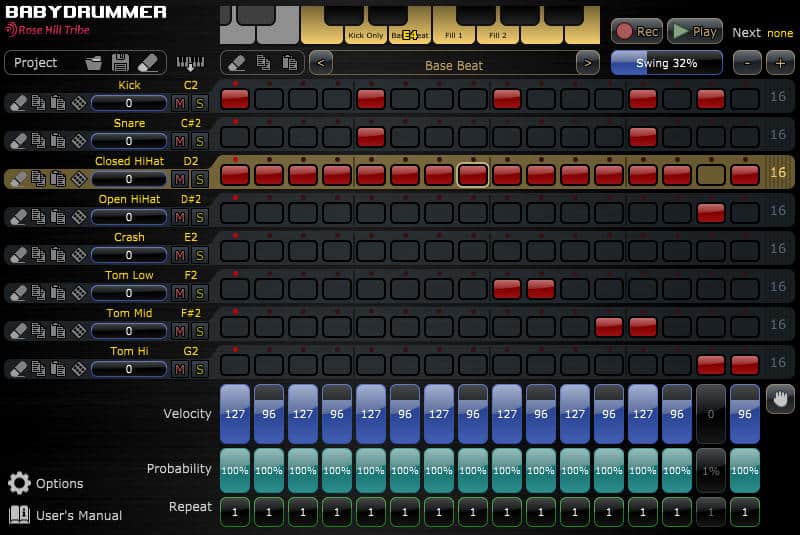 BabyDrummer isn’t a drum sampler, and it’s not an instrument; Rose Hill Tribe makes that very clear right off the bat.

For anyone new to programming drums with a step sequencer, it provides an easy introduction and a fun way to generate interesting rhythms.

Anyone who is well-versed in drum sequencing may find BabyDrummer to be a simpler/faster alternative.

So, on the surface, it has something to offer everyone.

The first thing to remember is that you must use it in conjunction with an instrument (virtual or even hardware if that’s your preference). There are many freeware drum samplers out there, like Sitala, BPB Cassette Drums, or Grooove BPB Edition.

To use BabyDrummer, you just place it before your chosen sampler in the effects chain so that its output (MIDI pattern) feeds the sampler. It functions much like Reason’s Drum Sequencer, which I’m sure many of you know well.

What you get is eight lanes by default and this number can be extended to sixteen. Each lane is assigned to a drum and each contains sixteen steps.

There are a bunch of functions that make it easy to get started straight away. At the top of the GUI, you’ll see a virtual keyboard that triggers preset patterns (shown in the menu below), fills, and so on. MIDI notes outside a certain range will bypass BabyDrummer, and go straight to the sampler, meaning you can add single hits to existing patterns.

The sequencer is empty by default, so you’ll need to build your first pattern from scratch. It would be nice to have a few drum patterns available out-of-the-box, though.

Basic per-step functions like Velocity, Probability (to add randomness), and Repeat are available. It also features some slightly more advanced features like Swing, Shift (nudges drum hits either direction to drag/push the beat or create extra tension), and the ability to adjust the number of steps per lane to create polyrhythms.

BabyDrummer appears to do everything it set out to do. Unfortunately, it’s another one I can’t check out myself as a Mac user. I would have liked to play around with it to say a bit more about why BabyDrummer is the right sequencer for you.

Since I can’t do that, I can still say it looks straightforward to use, and there are many benefits of using a step sequencer in general.

Step sequencers encourage experimentation, often leading to grooves that you wouldn’t have found otherwise. They are a quick way to get a project started, can be a lot of fun, and aren’t nearly as rigid as some may think.

For various genres, I still turn to the MPC sequencer or sometimes Wave Alchemy’s Evolution.

BabyDrummer is available in 64-bit VST3 format for Windows. As a random parting note, it made me think about Baby Driver and its killer soundtrack.