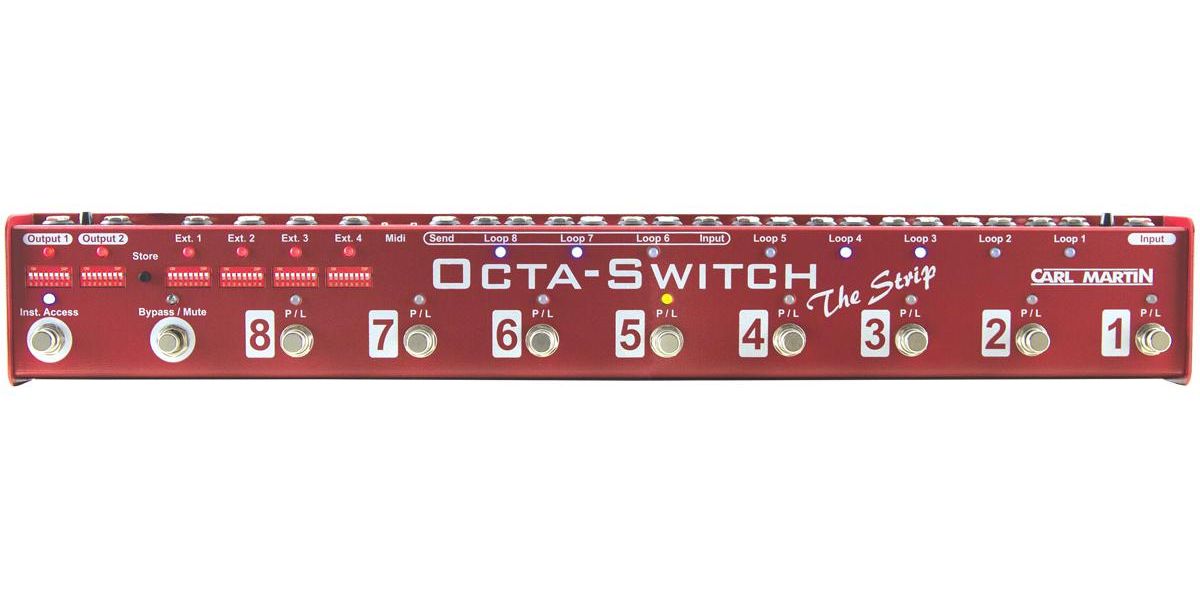 Any time I come across a new, powerful piece of compact switching technology, I can’t help but flash back to the fridge-sized racks and massive MIDI controllers that were once at the heart of many pro rigs. Until pretty recently, a pro-level switching system still cost serious coin. Carl Martin did a lot to close the affordability gap in that product category with their Octa-Switch series. But Carl Martin’s latest (and slimmest) iteration of their Octa-Switch line, the Strip, is one of the easiest ways yet to manage your pedalboard and not break the bank.

The 23-inch-long Strip (which will fit at the foot of a Pedaltrain Novo 24 pedalboard) is built with eight effects loops and eight switches for presets, which Carl Martin calls “banks.”The Strip also provides a MIDI input, four external relay switches, and two outputs in case you want to run a dual amp rig. Carl Martin also smartly added a switchable buffer, a mute, an instant access switch that enables preset customization or use of an isolated effect on the fly, a preset store button, and four sets of DIP switches for the four relays and two outputs. It’s a well-engineered and designed unit that strikes a great balance between making practical features accessible and avoiding user option paralysis.

Getting your head around how the Strip works is simple stuff, even if you haven’t used switchers extensively. Each loop contains a pedal—or a group of pedals. With a single tap of a bank switch you can turn any number of pedals on while simultaneously turning others off. And thanks to the DIP switches, you can also assign amp outputs, amp channel switching functions, and amplifier reverb to a dedicated presets.

I wired the Strip up with an MXR Dyna Comp in loop 1, a Nobels ODR-Mini in loop 2, a Wampler Hot Wired in loop 3, and a Line 6 HX Stomp in loop 8—which was also connected via MIDI. My goal was to create a single preset that used the Dyna-Comp and Nobels, and then a second that used just the Wampler. With switch 1 engaged, I hit the instant access button, the LEDs turned blue, and I chose which loops I wanted assigned to preset 1. I chose loops 1 and 2, hit the little store button, and the instant access light blinked three times to indicate that preset was saved. I repeated the process bank 2. In short, I was able to program two distinctly different tones in less than five minutes. The process couldn’t be much more straightforward.

Using the DIP switches to assign presets to different outputs is easy too. For my test, I placed a Revv D20 in output 1 and a Fender Hot Rod Deluxe in output 2 and assigned a preset to each output by selecting the corresponding DIP switch position under each output. If you prefer stereo operation, you can also use the two outputs in stereo via the stereo return on loop 8. And if you’re into the four-cable switching method, which enables you to situate pedals before or after the preamp in your amp’s effects loop, you can run loops 6, 7, and 8 via dedicated sends and returns.

Carl Martin’s Octa-Switch is a real refinement of the already impressive Octa-Switch series. It’s intuitive, the build quality is top notch, the ease of programming is tough to beat, and the unit and ease of operation reflect a thoughtful, user-oriented, real-world, stage-centric engineering sensibility. If you’re looking for a pro-level solution to your increasingly complex pedal puzzle and don’t have loads to spend, the Strip warrants serious consideration.