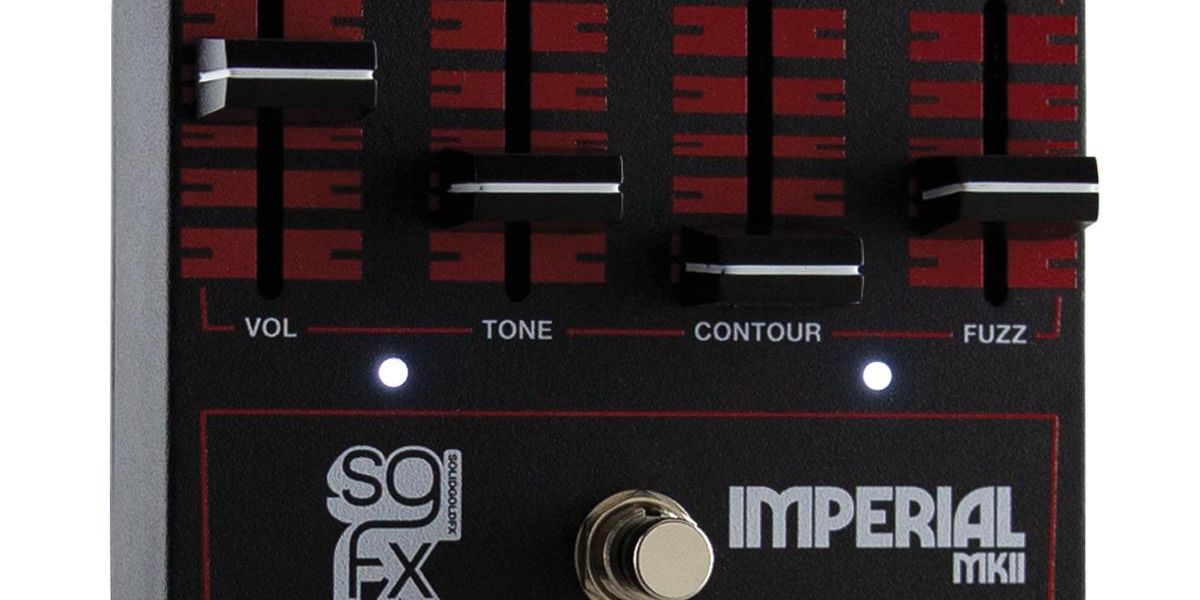 As jaded as I can be about fuzz (I see and hear a lot of them), it’s hard to keep from getting giddy about the SolidGoldFX Imperial MkII. With slider controls and a red-on-black color scheme, it’s clearly an homage to the early ’70s JEN Jumbo Fuzz, a vintage unit I covet not just for its ultra-sick Big Muff-based tones and quirky gate function, but it’s jaw-droppingly awesome Italo-sci-fi graphics.

SolidGoldFX couldn’t deliver all the visual deliciousness of a JEN Jumbo Fuzz without turning the Imperial MkII into an impractical, space-intensive, and expensive boutique oddity. But what it may lack in authentic vintage style, it makes up for with massive, ripping, and sometimes mangled fuzz that turns the Big Muff formula on its ear and dishes many deviant and super-tough tones.

It’s a wonder and a shame that sliding potentiometers aren’t used more often in simple effects. Yep, there’s a chance that a fair bit of dust, grime, and cheap beer could work their way through those slider slots over time (particularly if you’re the kind of weirdo that gravitates toward a fuzz this filthy). But as visual reference for levels on a dark stage, it’s hard to beat four bright white lines in parallel orientation. That the slider array looks so bitchin’ is a bonus. But so is the ease with which you can make fast, and even musically dynamic, adjustments on the fly, even with your foot. The potential for dirty pots aside, it’s an exceptionally practical and flexible design.

Volume, tone, and fuzz controls do what you’d expect. But the Imperial MKII improves upon the Jumbo Fuzz—at least in terms of flexibility—with the addition of a contour control that scoops or bumps the mids. It can profoundly affect the fuzz voice as well as the performance of the dynamic noise gate that makes the Imperial MKII feel and sound so unique.

At the Gates of Fuzz Heaven

The original JEN Jumbo Fuzz was essentially a Big Muff circuit with a few modifications—most notably a germanium noise gate. Similarly, the original Imperial was SolidGoldFX’s own version of a 3-knob, 4-transistor Muff.

Predictably, the Imperial MKII exhibits many sonic hallmarks of a Muff. For starters, it’s loud—one of the louder Muff-style circuits I’ve heard in a while. And while it may have the toppier edge of an earlier triangle Big Muff or a Ram’s Head, it still has loads of bottom-end ballast to lend a sense of mass. Getting the most recognizable Muff-style tones is a matter of keeping the contour control low, which scoops the mids. The rich, complex sounds found here are awesome for Dinosaur Jr.-style rhythm tones and punky desert-rock chug. And all of these sounds are enhanced by the sometimes subtle, and occasionally very obvious, gate.

If you lower your guitar volume—especially with a neck-position single-coil—you can dish fat and extra-percussive “Can’t You Hear Me Knocking” rhythm stabs.

In general, I’m not a big fan of gated fuzz. I like as much sustain as my rig will permit, and most gates feel rude and intrusive, even when they’re doing cool things. But the Imperial MkII’s gate isn’t too intense. On the original Jumbo Fuzz, the germanium gate was added to keep noise to a minimum. But in heavy rhythm applications, the MkII’s gate works beautifully as punctuation for palm-muted patterns. It’s not too clipped or harsh and it’s surprisingly dynamic. If you lower your guitar volume—especially with a neck-position single coil—you can dish fat and extra-percussive “Can’t You Hear Me Knocking” rhythm stabs. Place these clipped but substantial textures against a tight drummer, and the results can be devastatingly funky.

The one thing you won’t achieve with the Imperial MkII is soaring sustain in the Gilmour vein. Sustained notes sound huge and smooth—until they don’t. And if you attempt an operatic two-step bend you will invariably hear your signal collapse upon itself into awkward silence. If endless rivers of sustain are your first priority, there are many Muff-style circuits that will do the job more elegantly.

For a dude that doesn’t care much for gated fuzz, I fell head over heels for the Imperial MkII. The contour control and gate totally recast the Big Muff tone formula in fascinating ways. It’s powerful, flexible, unexpectedly dynamic, and the slider-based controls are practical and look fantastic. The Imperial MkII is a terrific Big Muff alternative, but it is an outstanding fuzz by any measure that deserves a category of its own.