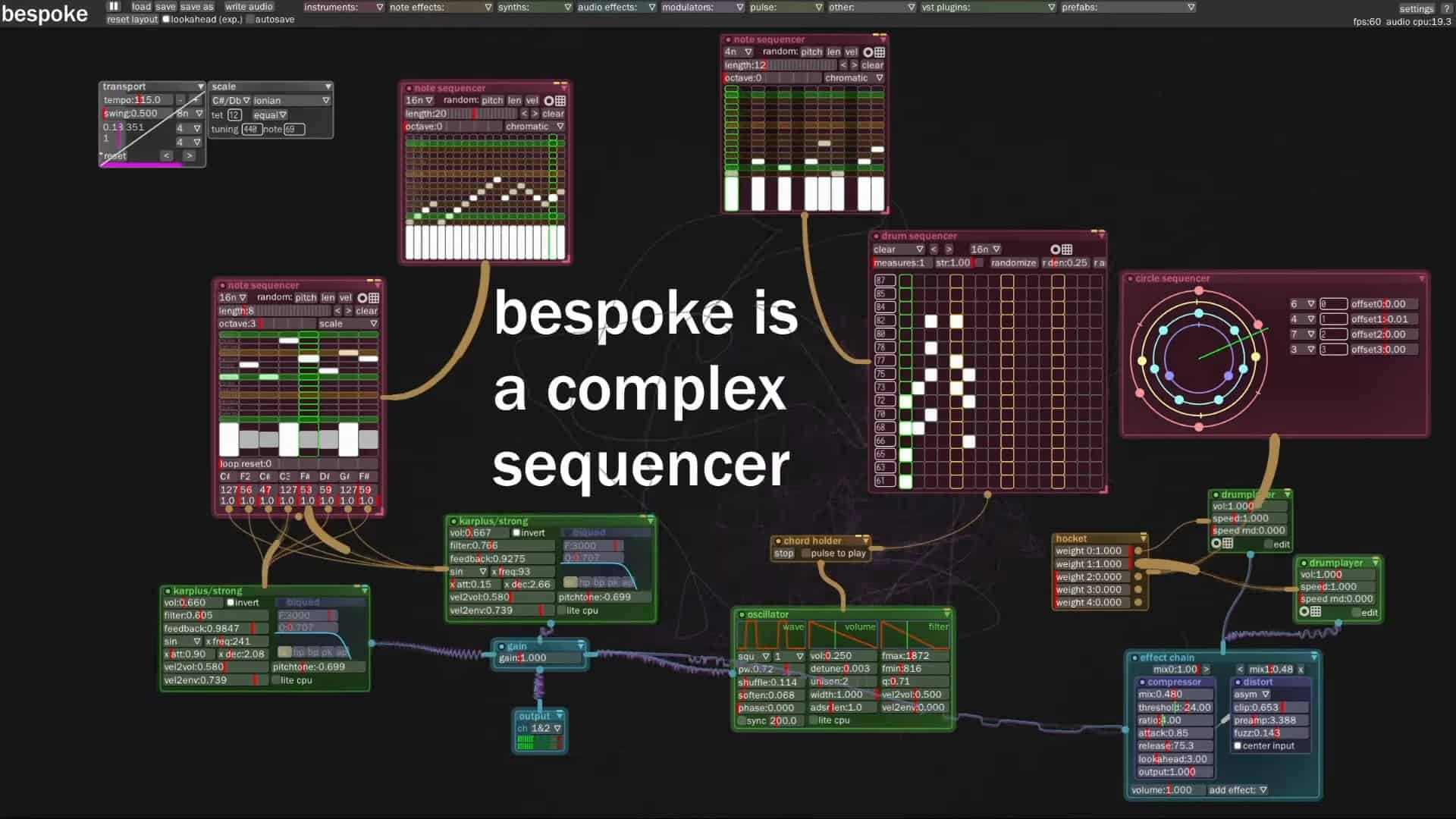 Bespoke Synth is a freeware (with optional donations) modular synthesizer and digital audio workstation for Windows, macOS, and Linux.

Bespoke Synth is the brainchild of developer Ryan Challinor. Ryan describes it as a bit like smashing Ableton Live to bits with a baseball bat and then asking you to put it back together.

It’s worth noting that Bespoke Synth isn’t a typical DAW by any means. It’s basically a blank canvas that allows you to create your own bespoke workflow.

If I can steal another line from the developer, Bespoke Synth is a customizable playground for sound. I think that sums it up very well.

Typically, we work with DAWs that have very practical and methodical layouts. At a glance, it might look like another modular synth, which it is, and I’ve seen it compared to things like SunVox and Native Instruments Reaktor.

But, it’s more than a synthesizer; Bespoke Synth has 190 modules that cover the main elements (and more) of music production and allow you to patch/position in conventional or non-conventional ways.

It’s also a VST host, so you can bring in 3rd party plugins as you would in a regular DAW.

I think it’s easy to become overly concerned with structure in your DAW, and I’m sometimes guilty of focusing so much on the end goal that I restrict my creativity or experimentation. From what I see so far, I get the impression that Bespoke Synth is very much about experimentation and being in the moment.

The more organic approach of Bespoke Synth might be suitable for some users or even offer a break from the norm.

On top of being a synth and a DAW of sorts, it’s also a live looper, complex sequencer, sample slicer, MIDI controller performance platform, and pedalboard.

Not to mention it’s a python live coding environment, which is a form of improvisation that goes beyond my own music-geekiness.

The modules are categorized by type in multiple dropdown menus, making it easy to find, drag and drop whatever you need. We aren’t going to go through all of the modules here, but some areas have a slight quirkiness that doesn’t come from a traditional modular approach.

I think Bespoke Synth has a certain charm, and it’s clearly the result of hard work over a long time.

If you head over to the Bespoke Synth website, you’ll see there are three versions, Bespoke (free), Bespoke Plus ($5), and Bespoke Pro ($10).

You’ll also see that all three versions are identical apart from the paid ones leaving fewer dollars in your pocket, which I thought was an endearing approach from the developer.

When we are also discussing a significant update to VCV Rack, it’s a good time for all things modular.