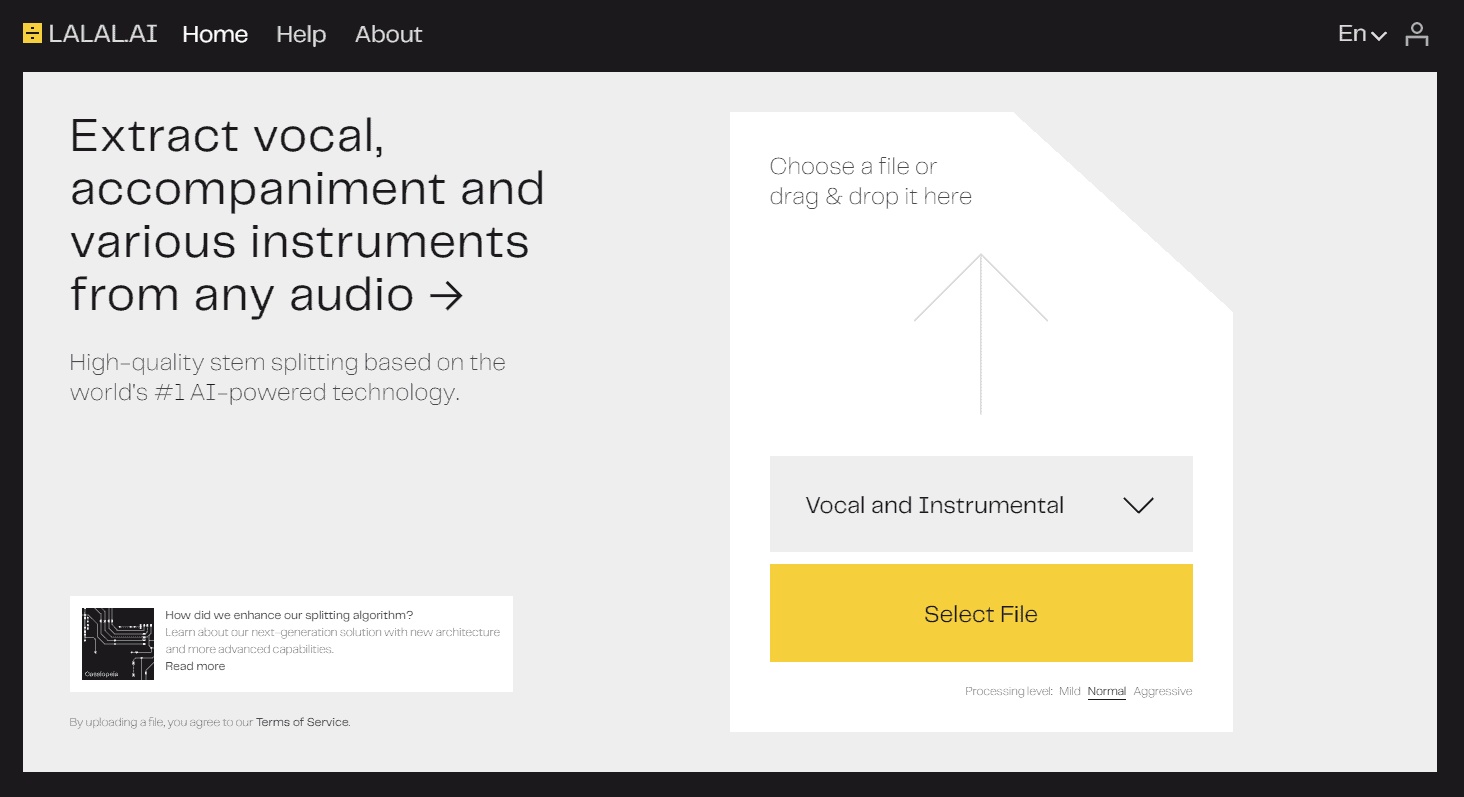 LALAL.AI updates its stem separation service with the ability to isolate acoustic and electric guitars, piano, drums, and bass stems from an audio or video file (in addition to the vocals and the backing track).

Before I get into the details of the latest LALAL.AI update, it’s fair to say that I had mixed feelings about the original release. You can read my first impressions in our previous LALAL.AI coverage.

My initial lack of excitement was no reflection on the service or the development team behind it. It was rooted in my early experience of crudely snatching instrumentals/vocals from tracks the best part of two decades ago using tools like Audacity.

My previous assessment of LALAL.AI was that it wasn’t perfect, but it was better than other similar services. While I still think that’s a fair assessment, I think it deserves more enthusiasm than I gave at the time, and here’s where I think I went wrong.

Our wise chief in command, Tomislav, said this last time:

“LALAL.AI reminded me of those silly scenes in TV shows like CSI where they extract an immaculate voice recording out of some garbage background noise and then use it as proof against a suspect. It sure seemed silly back in the day but not so much anymore.”

After revisiting this, I realized that I wanted to live in a world where this was possible. The same world where any tech-related request, no matter how previously unheard of, was no more than a few random keystrokes away.

I also previously said that I believed the LALAL.AI development team was on a mission to improve constantly, and that’s why I’m excited now.

Doing so is easy; simply select the desired instrument (or vocal/instrumental) from the dropdown menu (stem separation style list). Then, choose your file, and you’re good to go.

Instrument isolation has no charge for all users, whether free or premium.

I used the same tracks I used last time to test the service, which didn’t make it easy for LALAL.AI. While I won’t let my excitement lead me to say it’s 100% perfect, I will say I’m very impressed for a few reasons.

But I’m OK with that because if I wanted to make a remix with the original piano and some new instruments/vocals, I have a perfectly useable track that doesn’t sound like it’s been forcefully removed against its will.

The other reason I’m impressed is that LALAL.AI could be great for learning song parts. I wish I had this process so readily accessible to me when I was a beginner student. In the early band days, isolating the piano would have helped me work out what to play so much easier.

I know we have YouTube and countless other services for song tutorials, but there are two problems. One is that YouTube tutorials don’t always match the original track, and the other is that I was a student before the advent of the first iPhone; YouTube wasn’t as much of a go-to resource.

I recently talked about AI making appropriate decisions based on what it has learned (Baby Audio’s TAIP). Before I shut up, I want to acknowledge that LALAL.AI has fed terabytes of data to its new neural networks. Vast amounts of test data and powerful servers highlight a dedication to pursuing the highest quality.

It gets an enthusiastic thumbs up from me.