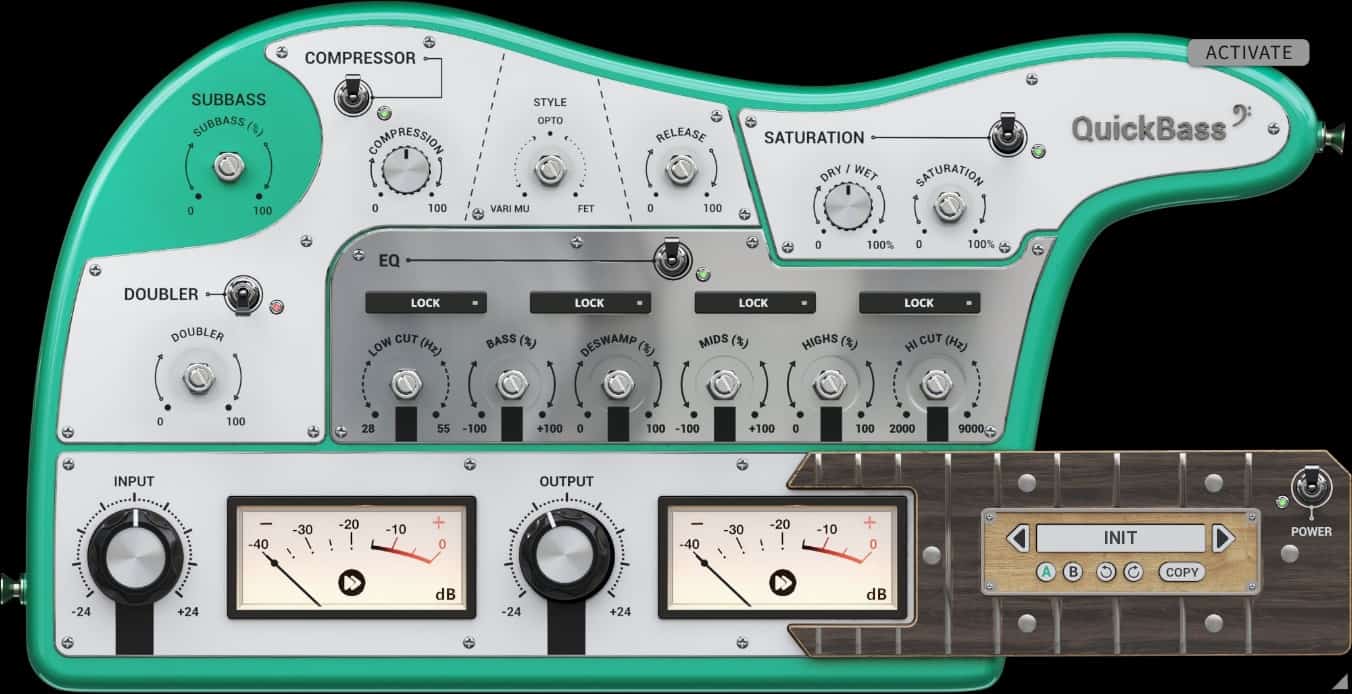 UnitedPlugins released a free edition of QuickBass (€99), a bass guitar processing plugin for Windows and macOS.

QuickBass is an all-in-one bass guitar processing plugin. It incorporates an EQ, a compressor, a doubler, saturation, and a sub-bass booster.

The free version of QuickBass works is not your standard freeware plugin. It’s essentially a “lightweight” edition of the full software, without annoying nags like noise bursts and timeouts.

After installation, QuickBass works as a fully-featured 15-days trial. Once the trial expires, the plugin continues working in free “second-hand” mode. The free mode offers the same core features but with most of the knobs missing from the GUI.

It’s the software equivalent of purchasing second-hand studio hardware where the previous owner compulsively rotated the knobs until they fell off.

QuickBass Free lets you apply compression, saturation and doubling to the signal, but the fine-tuning options are limited. You can only adjust the saturation dry/wet level and the compression intensity.

That said, the underlying algorithms are the same as in the full version of the plugin, and you can still use QuickBass Free as a quick fix for some standard bass guitar-related mix issues.

The plugin also features input and output gain controls, a preset manager, a bypass switch, and a pair of VU meters. A button in the upper-right corner is the only reminder that you can purchase the plugin to unlock its full potential.

And here’s the catch: the free edition includes all the presets from the full version, and the presets sound just the same in QuickBass Free. So you can still fine-tune the plugin to a degree by selecting different presets.

Another cool thing about the offer is that you don’t have to sign up to get the installer. Click the “Try it for free” button on the product page, download the installer, and you’re good to go.

United Plugins used the same concept for their FrontDAW and Royal Compressor plugins, and I think it works quite well. It gives us a taste of the full software and then converts to the free version, but the free version still provides decent value.

And here’s the developer’s take on the freebie version:

“The main change in this version is the way the plugin behaves after the 15-days fully working trial version expires. Instead of generating noises, the plugin remains fully functional (soundwise). QuickBass 1.3 turns into a free second-hand version and only loses the chance to tweak some of the parameters. Presets made with a full version remain functional in the free version.”

I’m looking forward to reading your thoughts about QuickBass Free in the comments section. Do you like the “second-hand” freebie concept, or are the missing knobs too distracting?

QuickBass is available in VST2, VST3, AU, and AAX plugin formats for DAW software on Windows and macOS. Only 64-bit plugin hosts are supported.