The internationally renowned contemporary artist, Jorge Rodriguez-Gerada best known for his urban large-scale mural portraits and his colossal land-art pieces, has just presented his collaboration with the California based company Neurocrine Biosciences, Inc. an original piece of art called Monumental Moments – The Hug, a nearly 10-foot-tall and 500 pounds bronze sculpture that immortalizes the monumental times everyone has experienced during the pandemic and celebrates the human spirit, the resilience of the mental health community and all those who have been impacted by the pandemic. 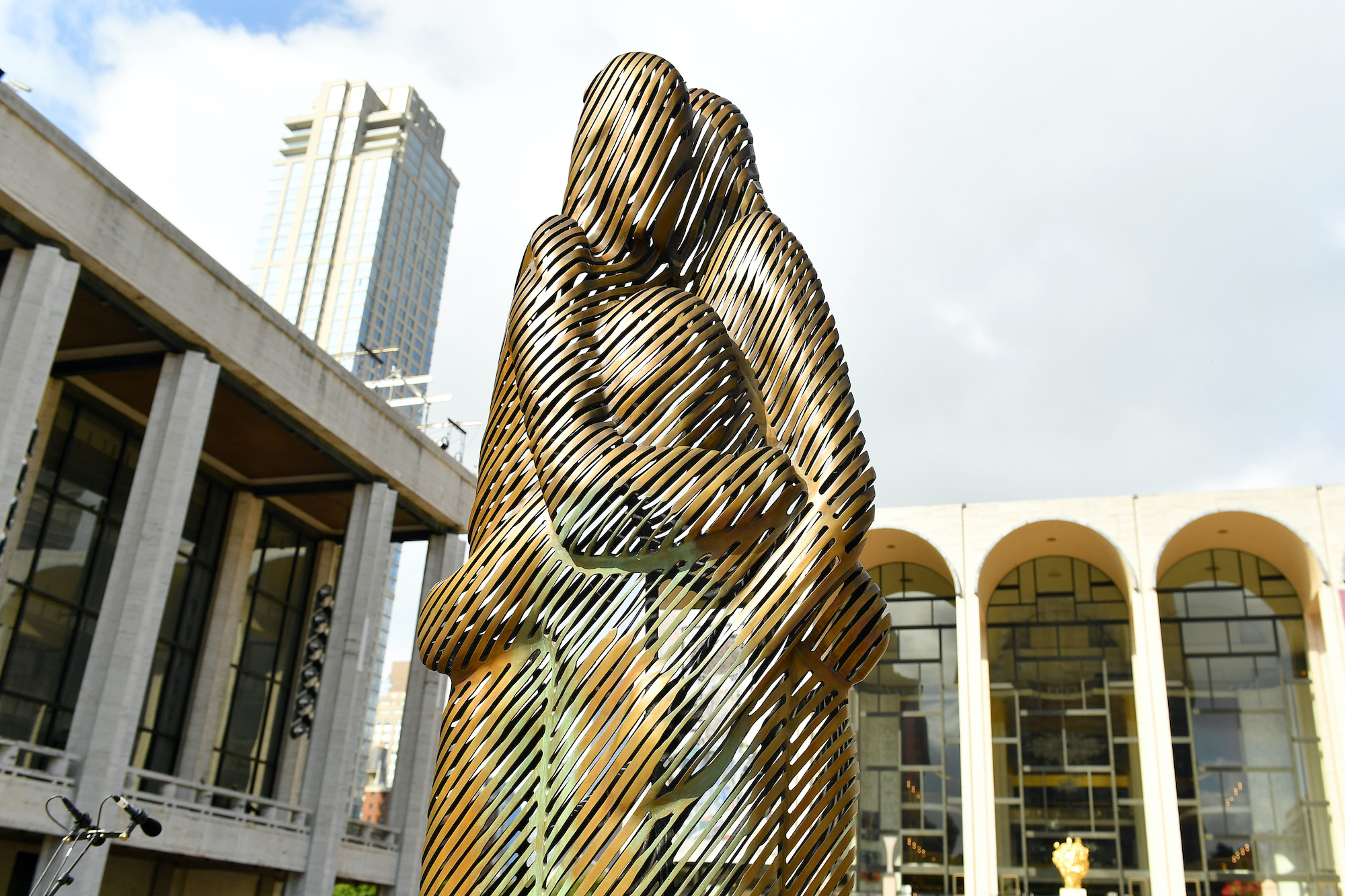 Inspired by the hundreds of stories shared on MonumentalMoments.com over the past year, Monumental Moments – The Hug was unveiled on Thursday, October 7, to coincide with Mental Illness Awareness Week (October 3-9) and ahead of World Mental Health Day (October 10) at New York City’s iconic Lincoln Center. 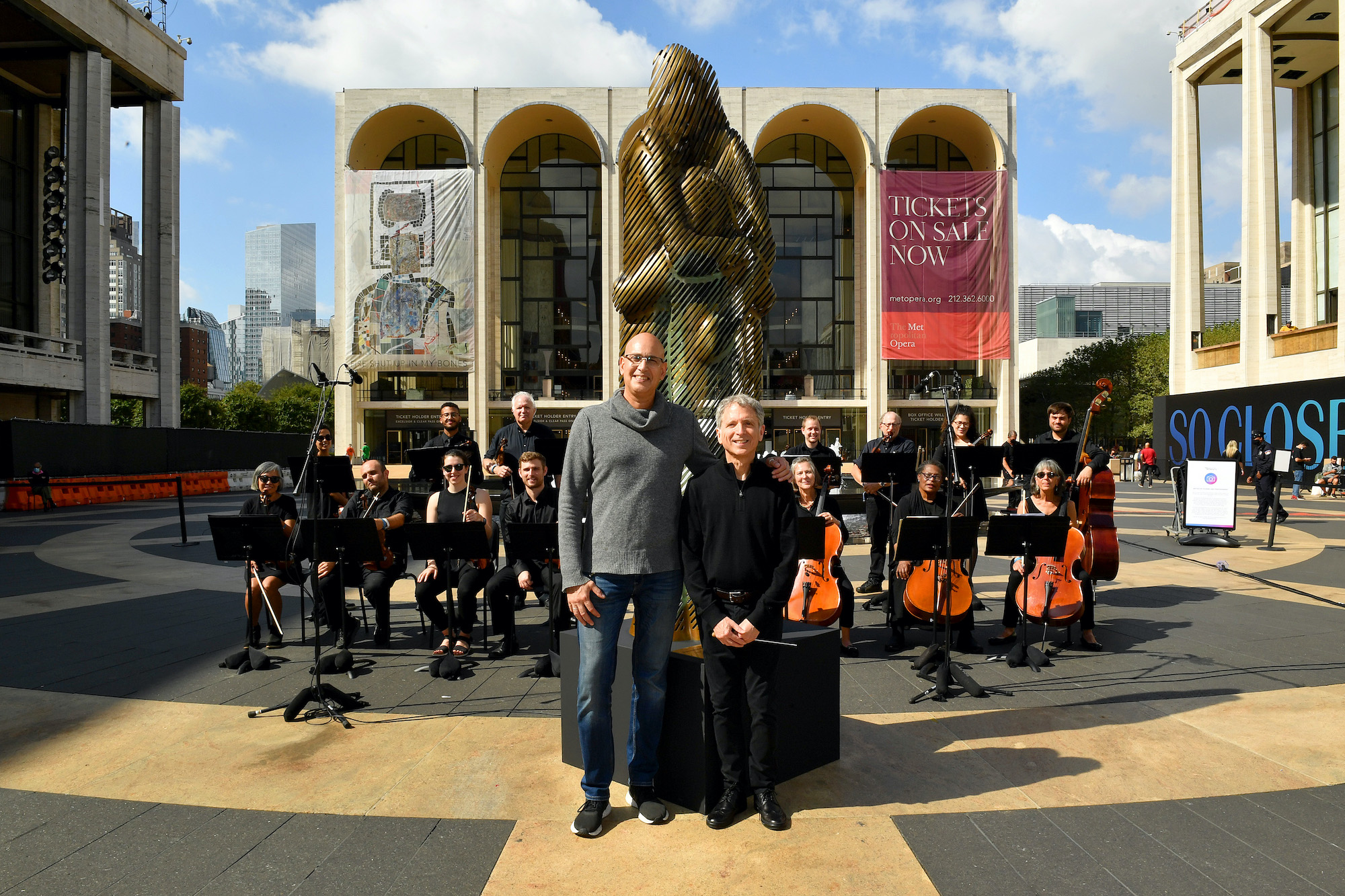 Performing during the reveal was the internationally renowned, Boston-based Me2/Orchestra, the world’s only known classical music organization created specifically for individuals living with mental illness and the people who support them. The orchestra created an original musical score to kick off the Monumental Moments initiative in October 2020. 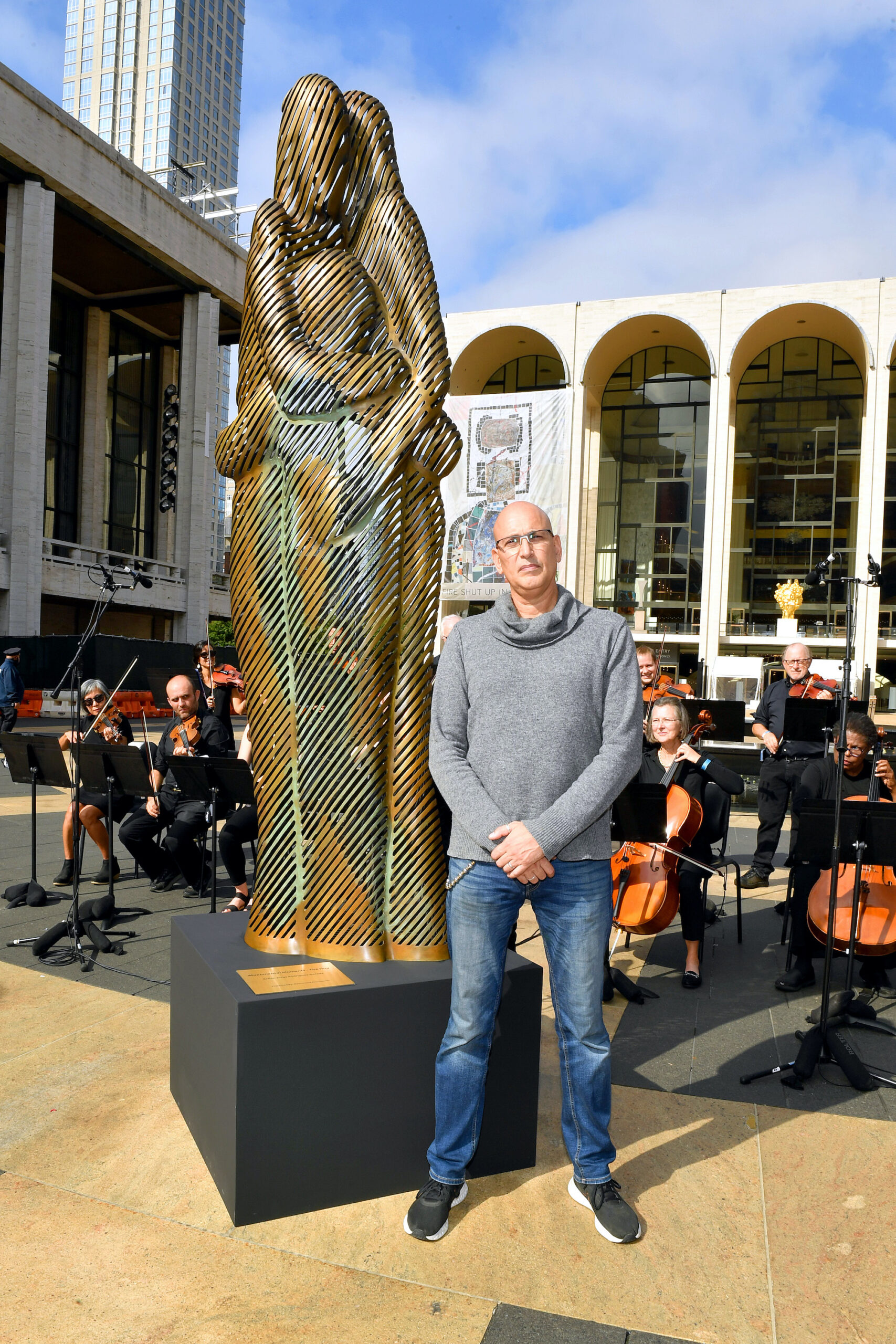 “I am honored to work with Neurocrine Biosciences to join the Monumental Moments initiative and create something that means so much to me. The sculpture is dedicated to those who have been struggling with their mental health because of the pandemic and represents the importance of supporting each other during these unprecedented times,” Jorge Rodriguez-Gerada said. “Art can help bring people together, and I hope the sculpture will remind us all that we can overcome these difficult times as a community.”

To usher in this time of reflection, Rodriguez-Gerada’s sculpture of a hug, developed in collaboration with international art and design foundry UAP, represents the importance of connection and supporting each other and how much many of us missed hugging loved ones during these trying times. 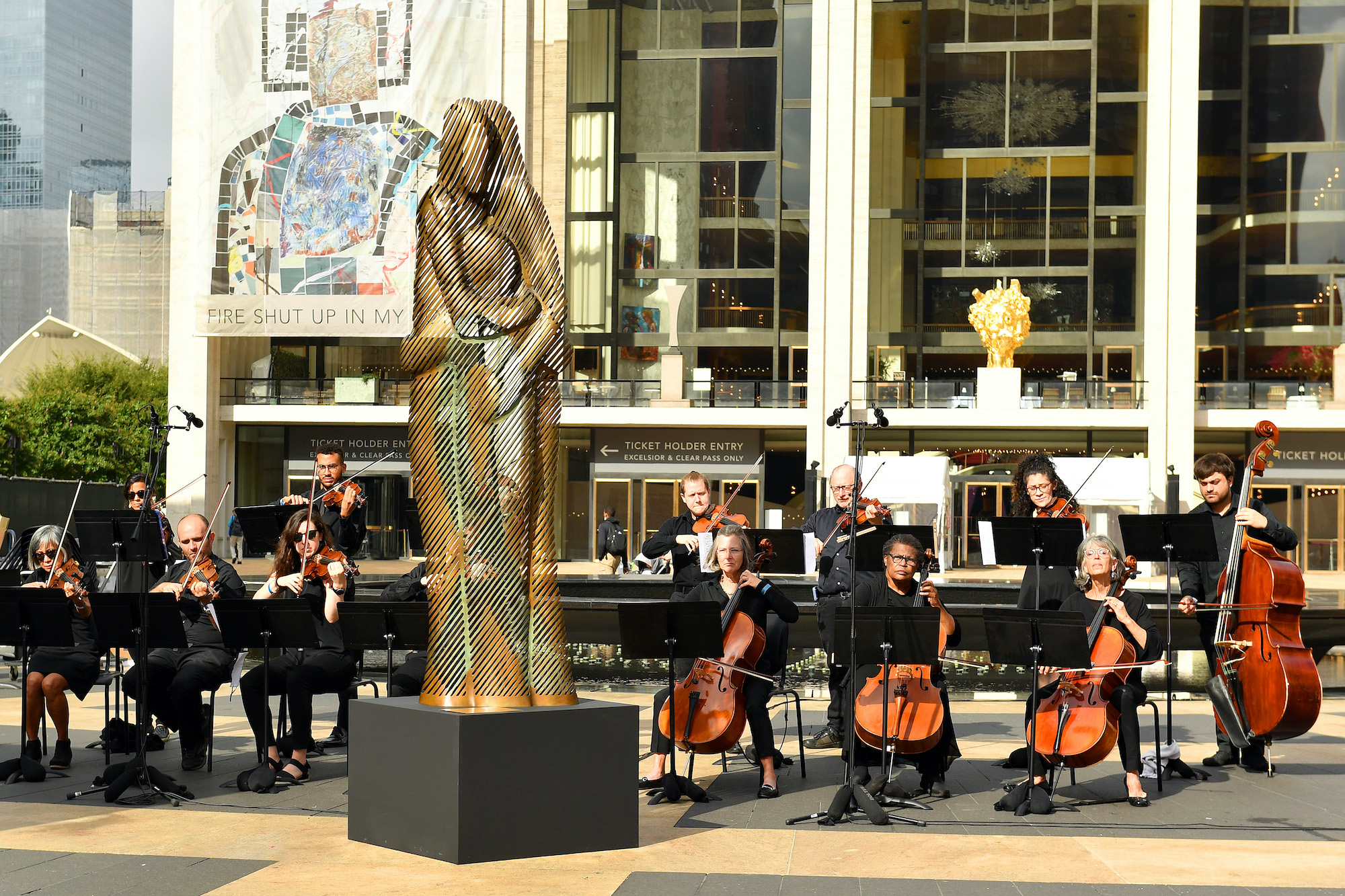 Research demonstrates that hugging can help minimize negative emotions and support a more positive state of being. 1 The sculpture depicts two adults and a child in an embrace through a complex bronze work thought in order to create the feeling of transparency and the illusion of movement, depending on your point of view. The green ribbon woven throughout represents the importance of continued mental health awareness and support, while highlighting the significance of this year’s Mental Illness Awareness Week and World Mental Health Day. 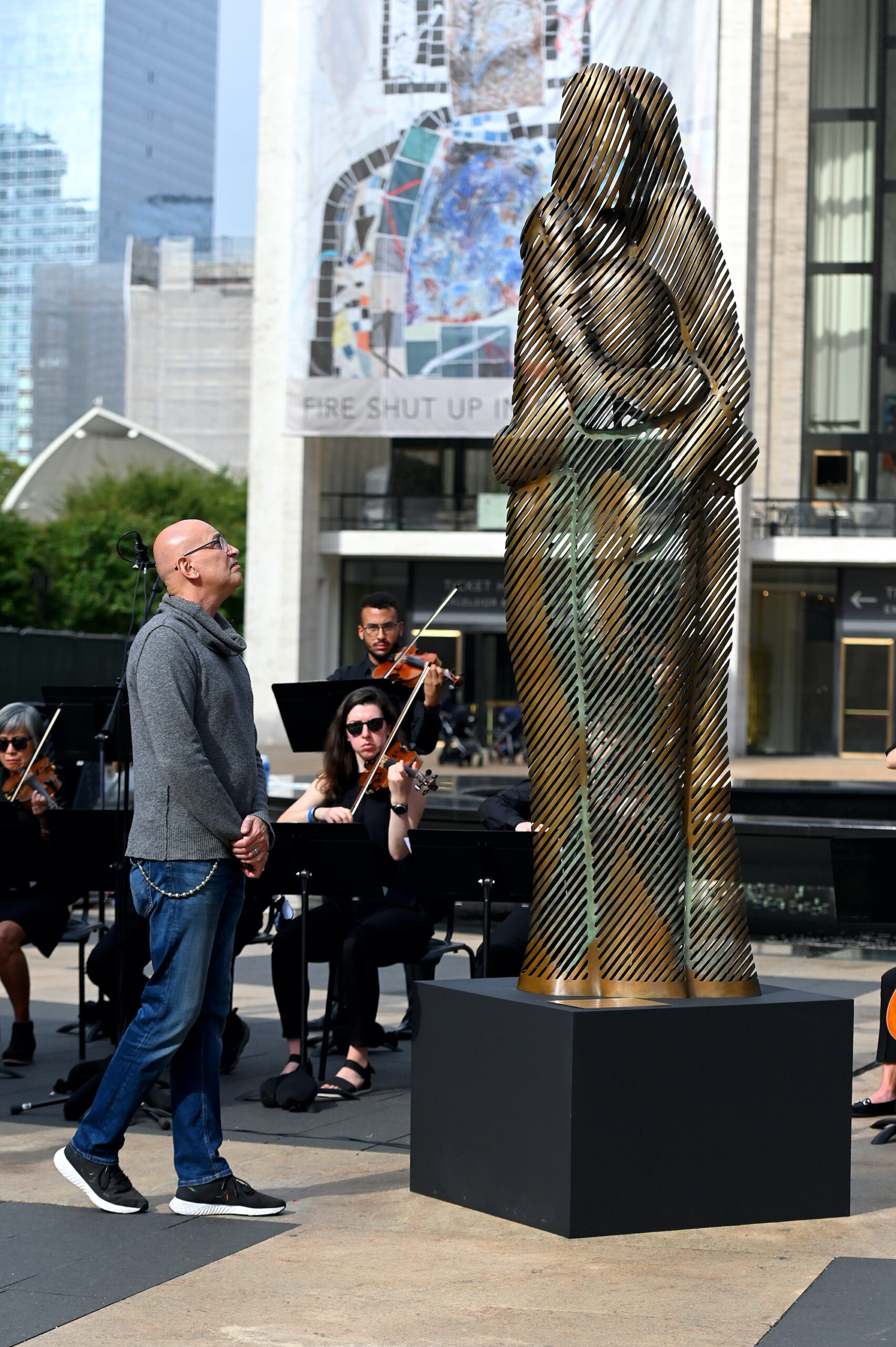 “The Hug“, by Jorge Rodríguez-Gerada is also a technical tour de force: the foundry of bronze was realized using a very innovative technique called ‘the lost wax’ combined with advanced 3D printing, mixing traditional and avant garde ways of working. The primary model is built on wax directly, being an exact replica of the future finished piece which allows injecting the liquid bronze metal without filling any mold.

“Last year in support of the launch of Monumental Moments, we debuted an original score to bring to life the emotional impact this time has had on many,” said Caroline Whiddon, Executive Director and cofounder of Me2/Orchestra. “This year, we are pleased to perform again and stand alongside Jorge and this magnificent sculpture to celebrate the resilience of the Monumental Moments community that has grown over time.” 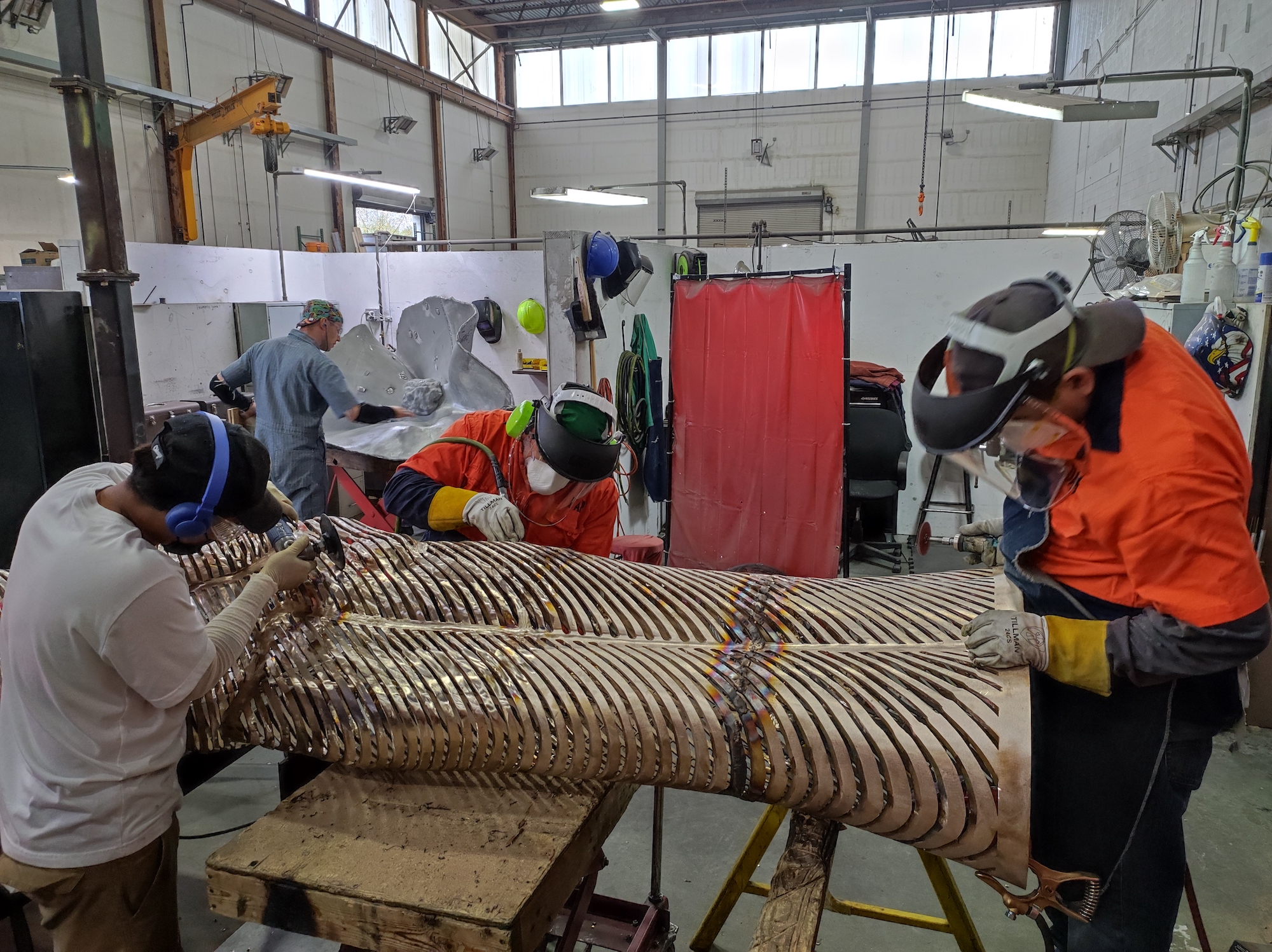 Jorge Rodriguez-Gerada, a Cuban American contemporary artist, is recognized worldwide for his unique “urban” large-scale mural portraits that can be seen from space. By utilizing walls and floors as canvases and citizens as models, he became one of the most well-known urban artists who displays his work on walls of different cities around the world.

Rodriguez-Gerada began his career in the early 90s as a founding member of New York’s Culture Jamming Movement. Since then, he has mastered his artistic directions as a muralist, sculptor and land artist. Rodriguez-Gerada has created a series of important large-scale murals, including his work in Queens, New York, memorializing the late Dr. Decoo, a Latino pediatrician who lost his life after battling the pandemic in New York City, and the Hispanic and African American communities who are disproportionately affected by COVID-19.

Scroll down below for more photos of “Monumental Moments – The Hug” 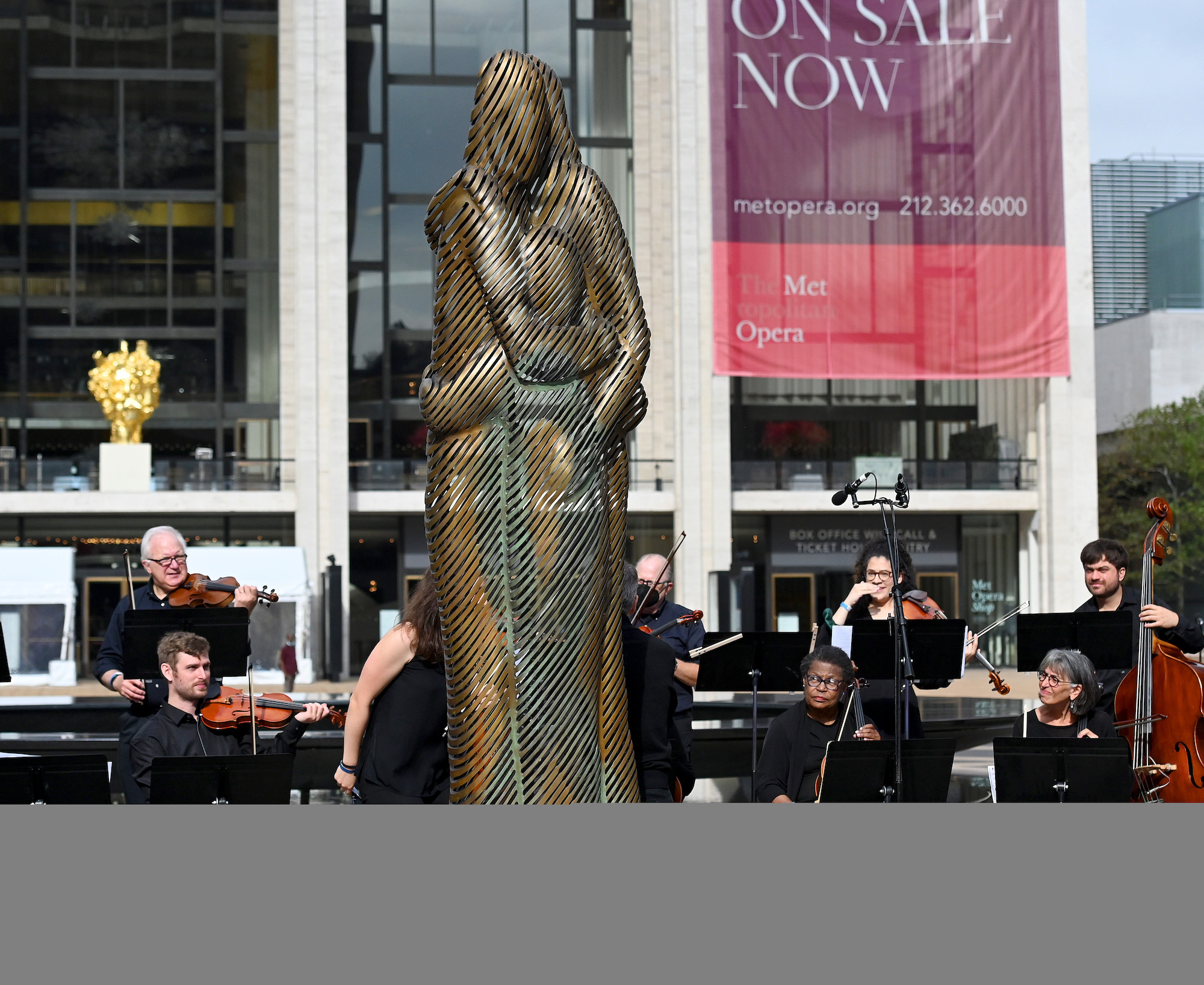 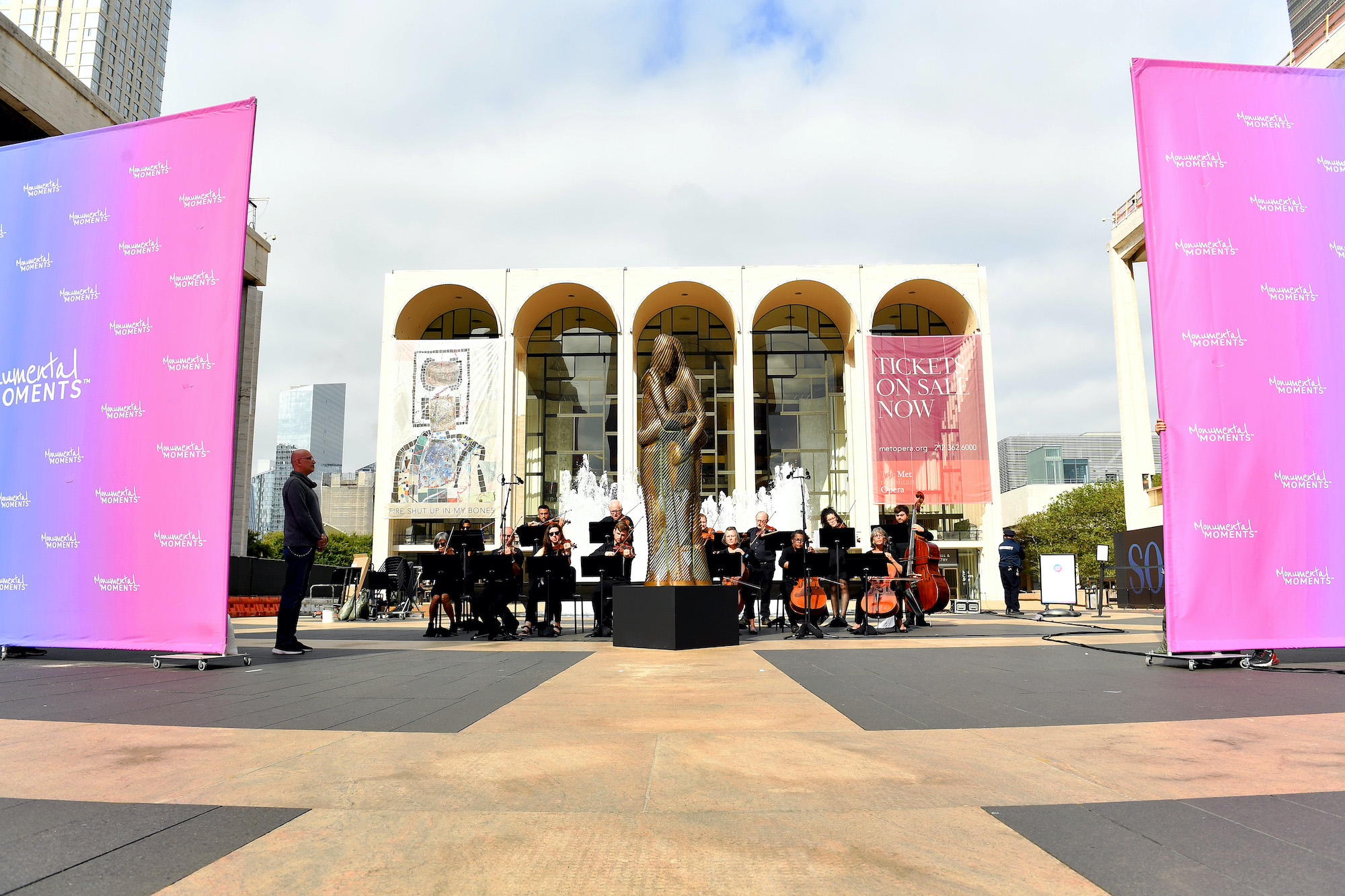 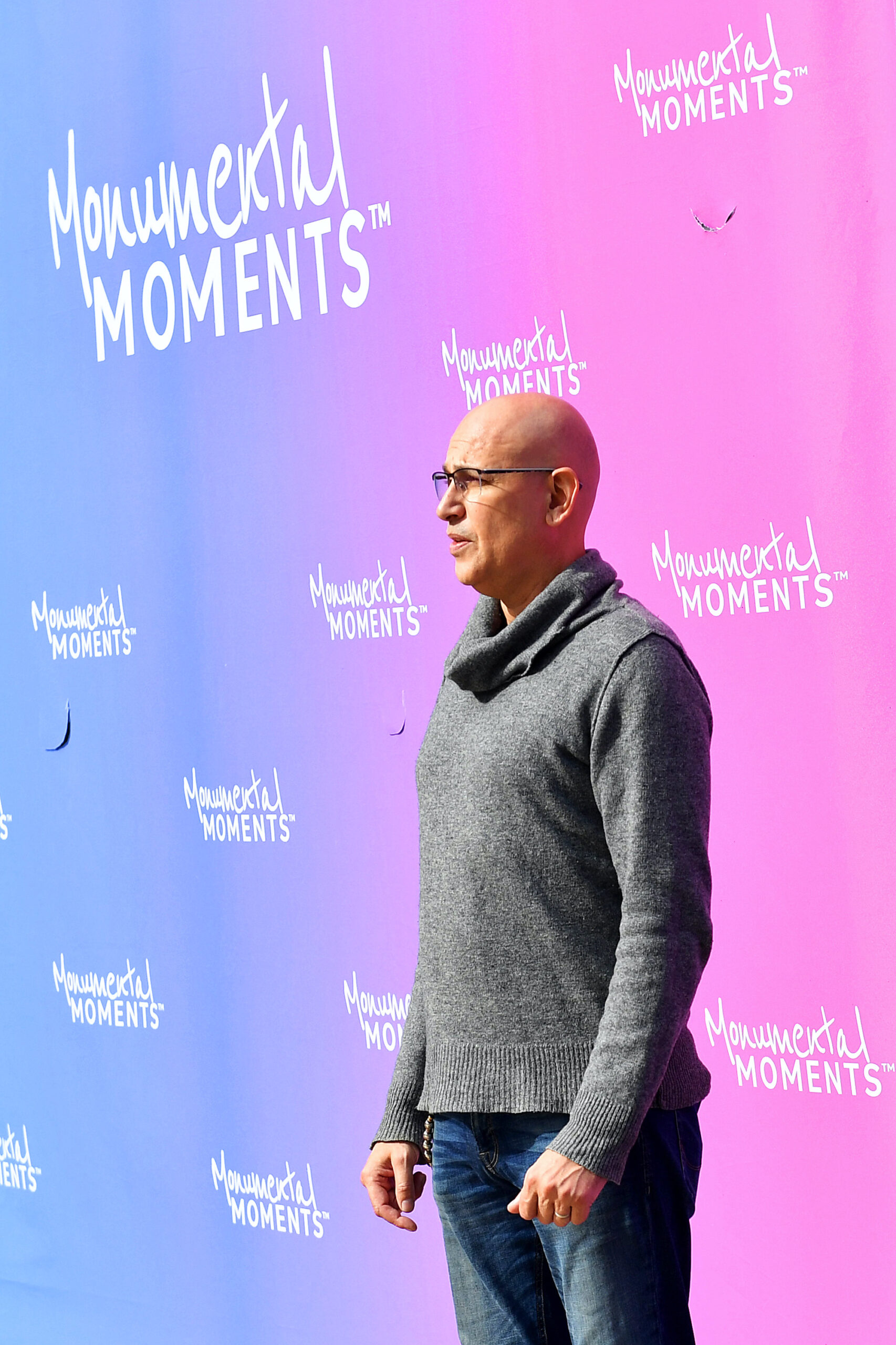 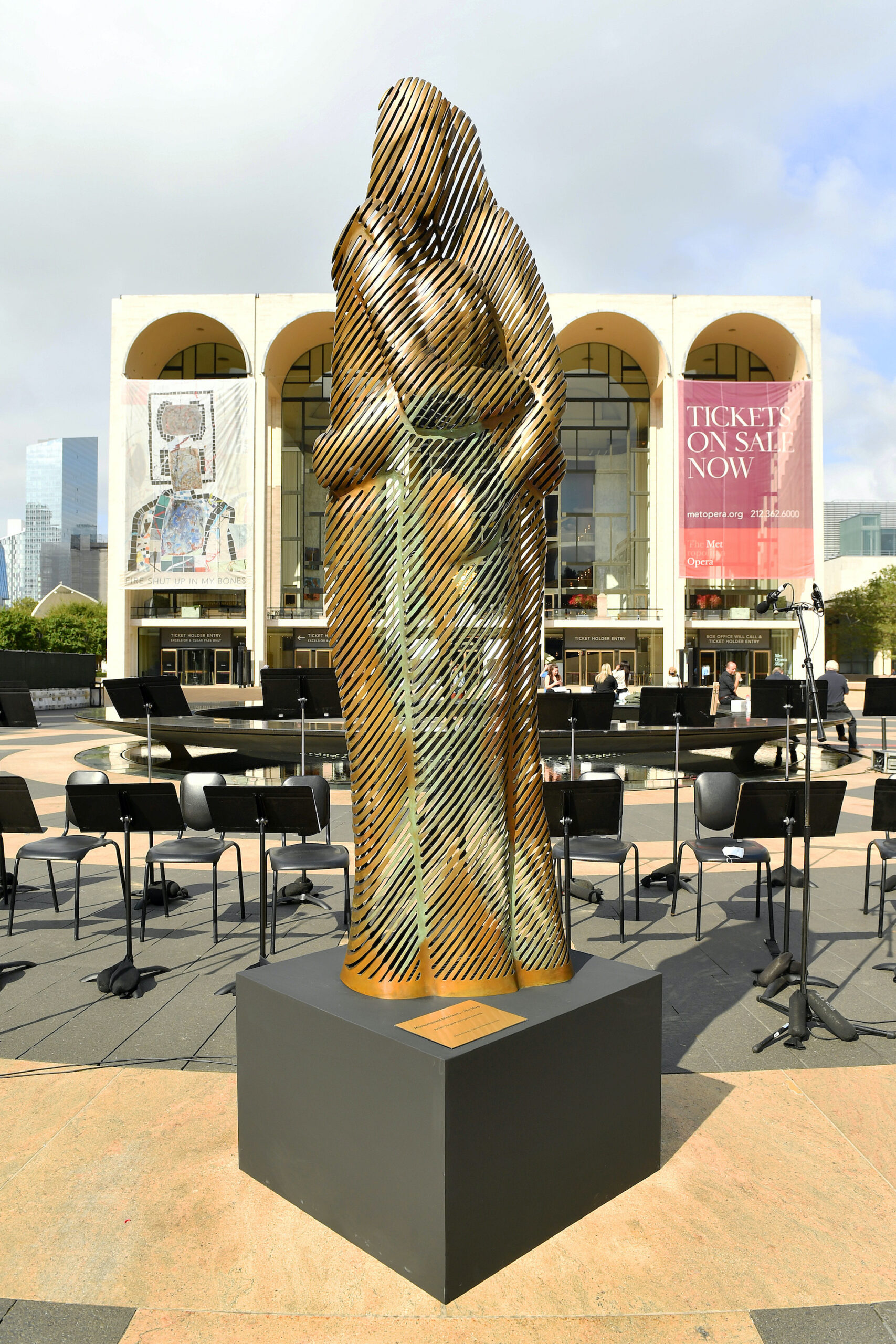 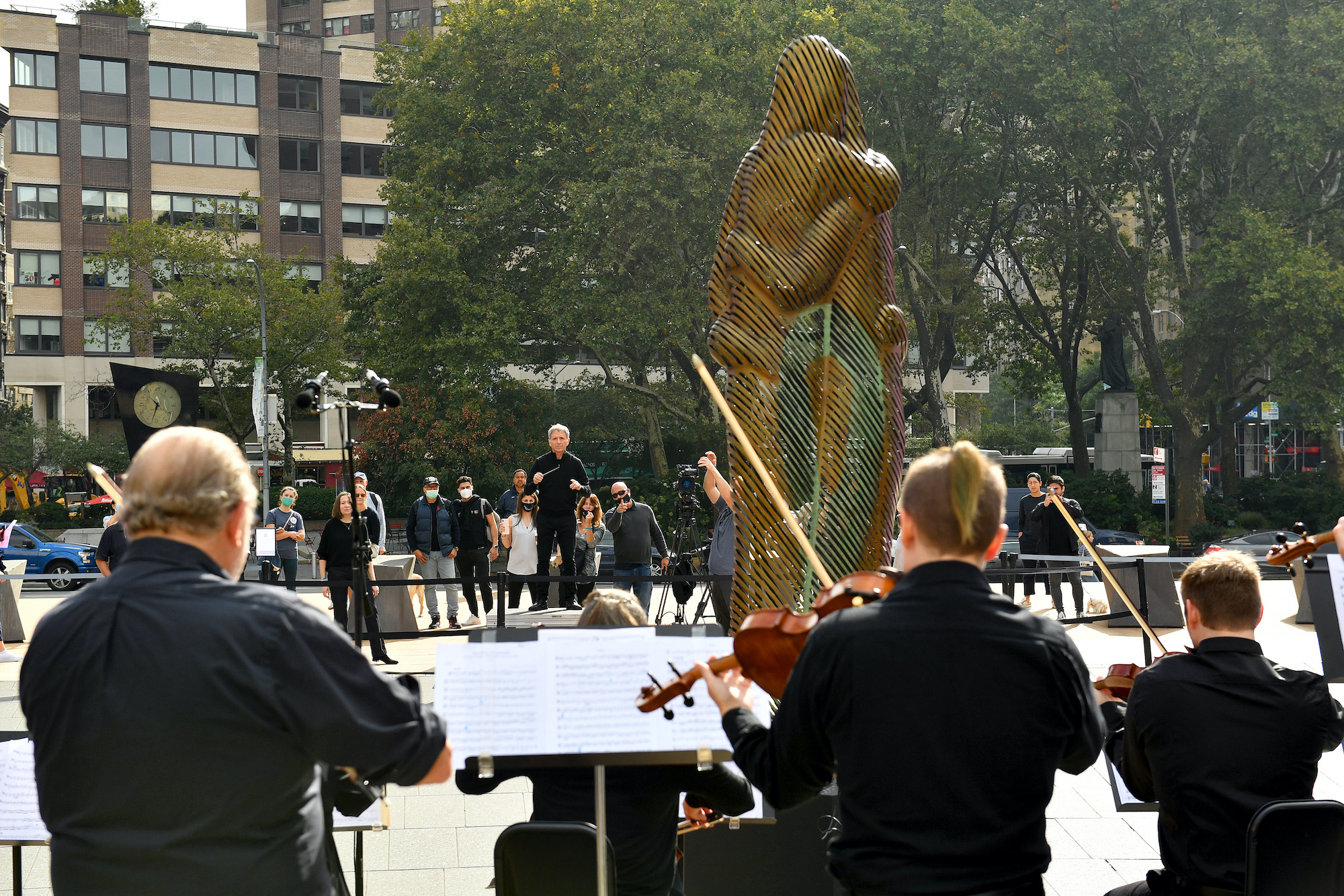