Ardú Street Art project made a triumphant return to Cork city for their second edition, bringing some of the country’s most exciting street artists to create thought-provoking, large-scale murals across the cityscape: Friz’s “Goddess Cliodhna” at St Finbarr’s Road, Shane O’Malley’s bold and bright coloured angular shapes and colours on Lower Glanmire Road, Asbestos’ “What is home?” at South Main Street. 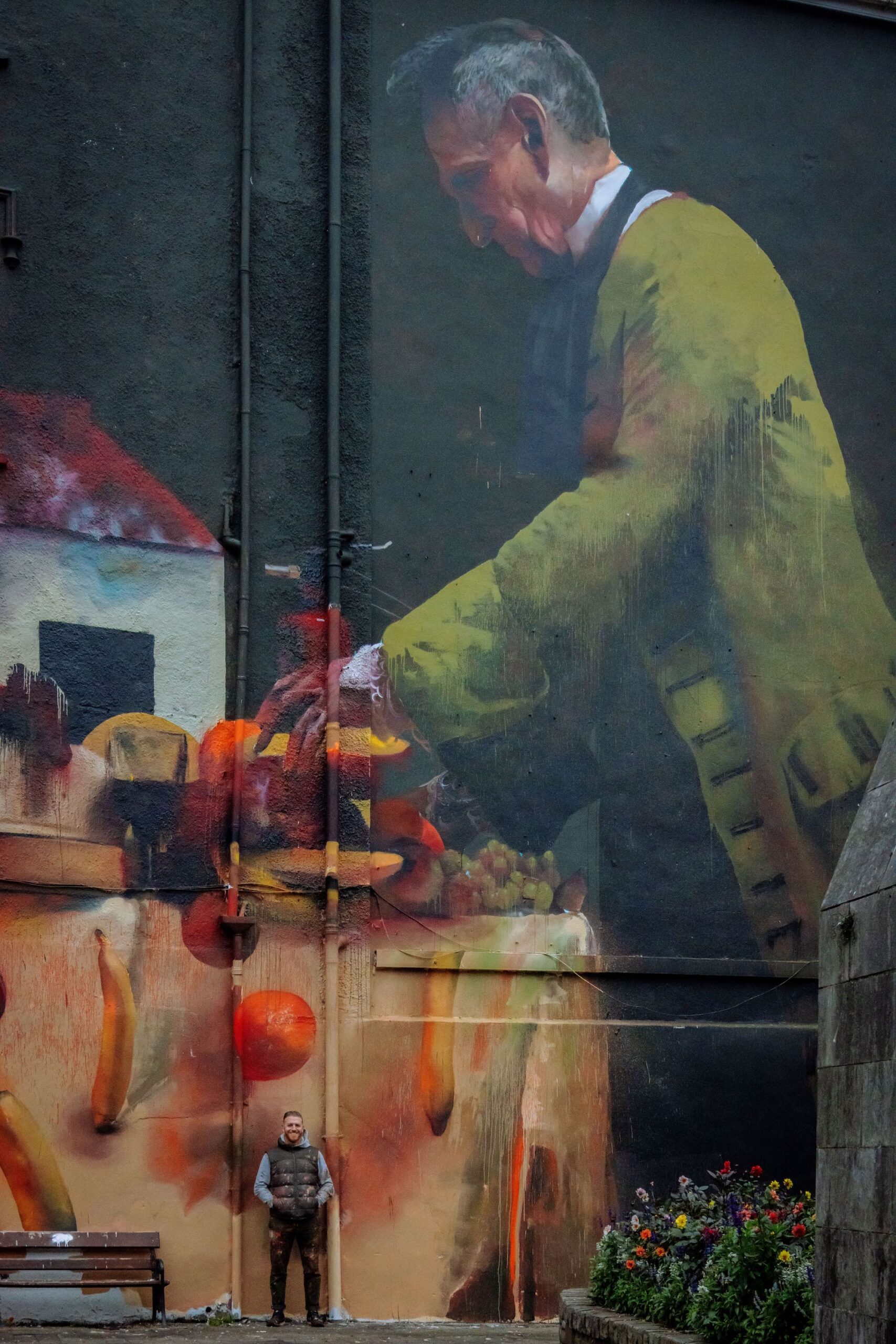 The fourth and final piece of the current series has now been revealed, painted by Cork-born, world-renowned artist Conor Harrington at Bishop Lucey Park (Grand Parade entrance). Based in London since the mid 2000s, Harrington has created street art in New York, Miami, Paris, London, Warsaw, Copenhagen, Aalborg, Mallorca, Sao Paulo, San Juan, and the Bethlehem Wall; this is Conor’s first large-scale mural in his hometown.

Harrington says, “My favourite part of Cork is the English market. I used to do as much of my shopping as possible there when I lived in Tower Street, before moving to London. And every time I’m home I’m always sure to have a stroll through and soak up some of the atmosphere. 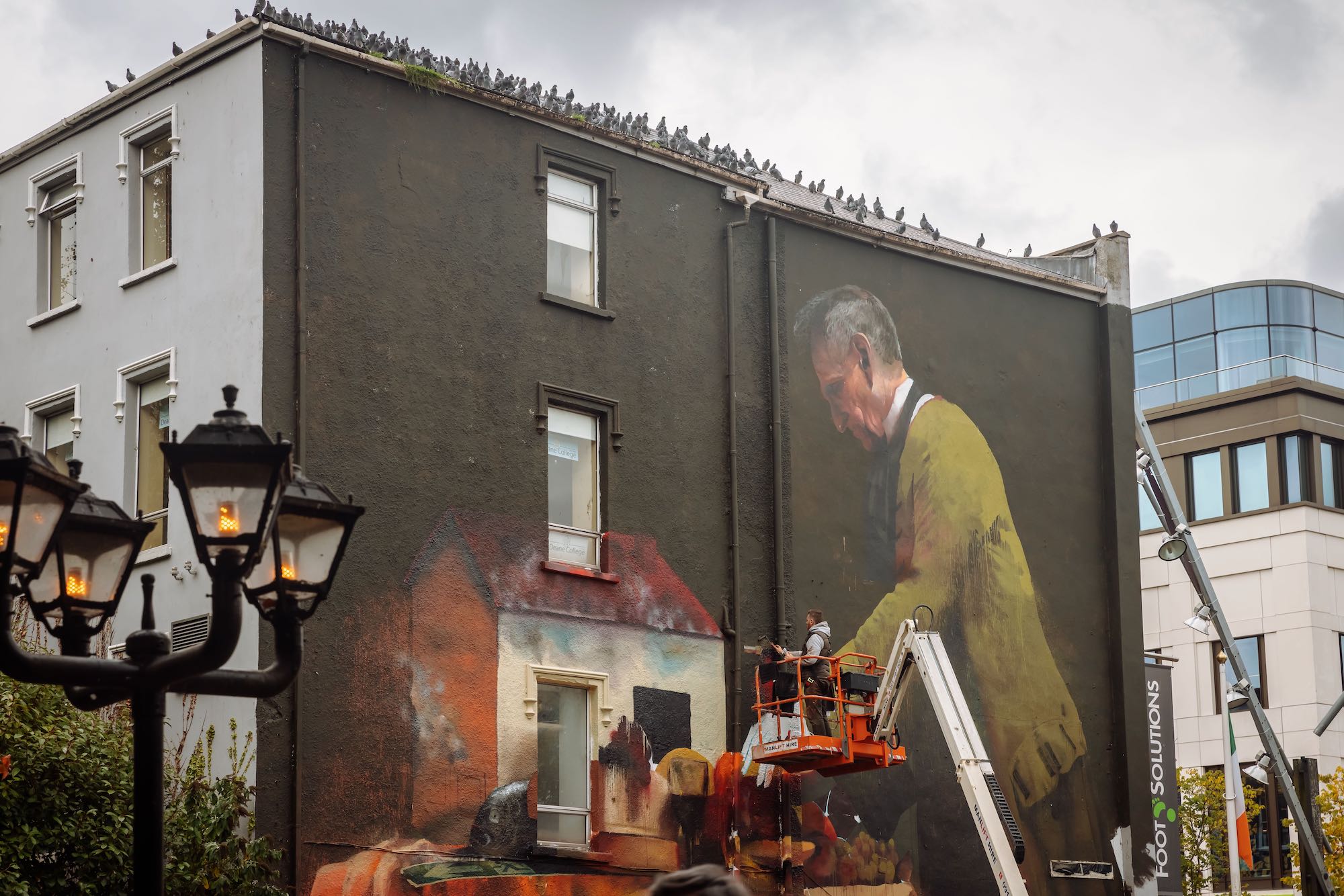 I’ve used the English Market as a starting point for my mural, the gate of which is opposite my wall. It was built in 1788 and has seen us through famine, boom and bust.

In my painting, a man sets a table, a composition of fruit and veg in the manner of a lot of still life paintings from the 18th Century, when the English market and much of the Grand Parade and Patrick’s Street was built. The table is overflowing with fruit, an abundance of fresh produce that has been available in the market for years. I’ve included a doll’s house on the table to illustrate how Cork is a city built on food and how our culinary scene is one of our greatest assets. I’ve also included a fire extinguisher on the table as a reminder of the Burning of Cork 101 years ago, and that although the market was mostly spared, damage was still done. 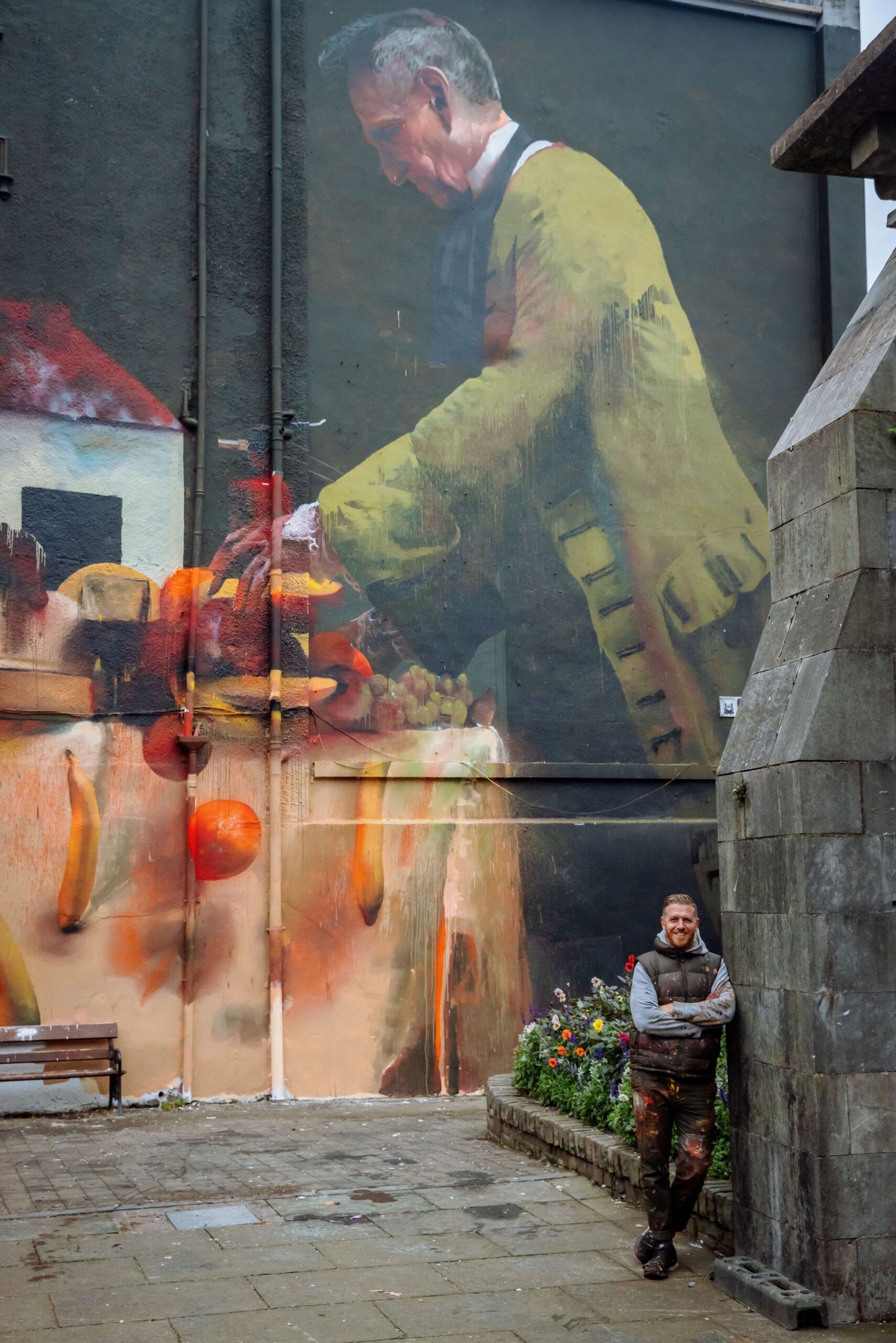 In the mural I’ve played with proportion and inverted the traditional scale of figure and dwelling to exacerbate the idea of the Georgian figure as a looming power or Lord over his domain. In my work I examine the role and legacy of the empire, and try to find parallels in contemporary culture. By including the doll’s house as a reference to home, housing and the current crisis in Ireland and the abundant fruit table which is in a state of overflow and collapse, I’m asking the question to whom does power and plenty belong? Despite this historical foundation, my mural is ultimately about the balance of abundance and excess, and the fall which inevitably follows.” 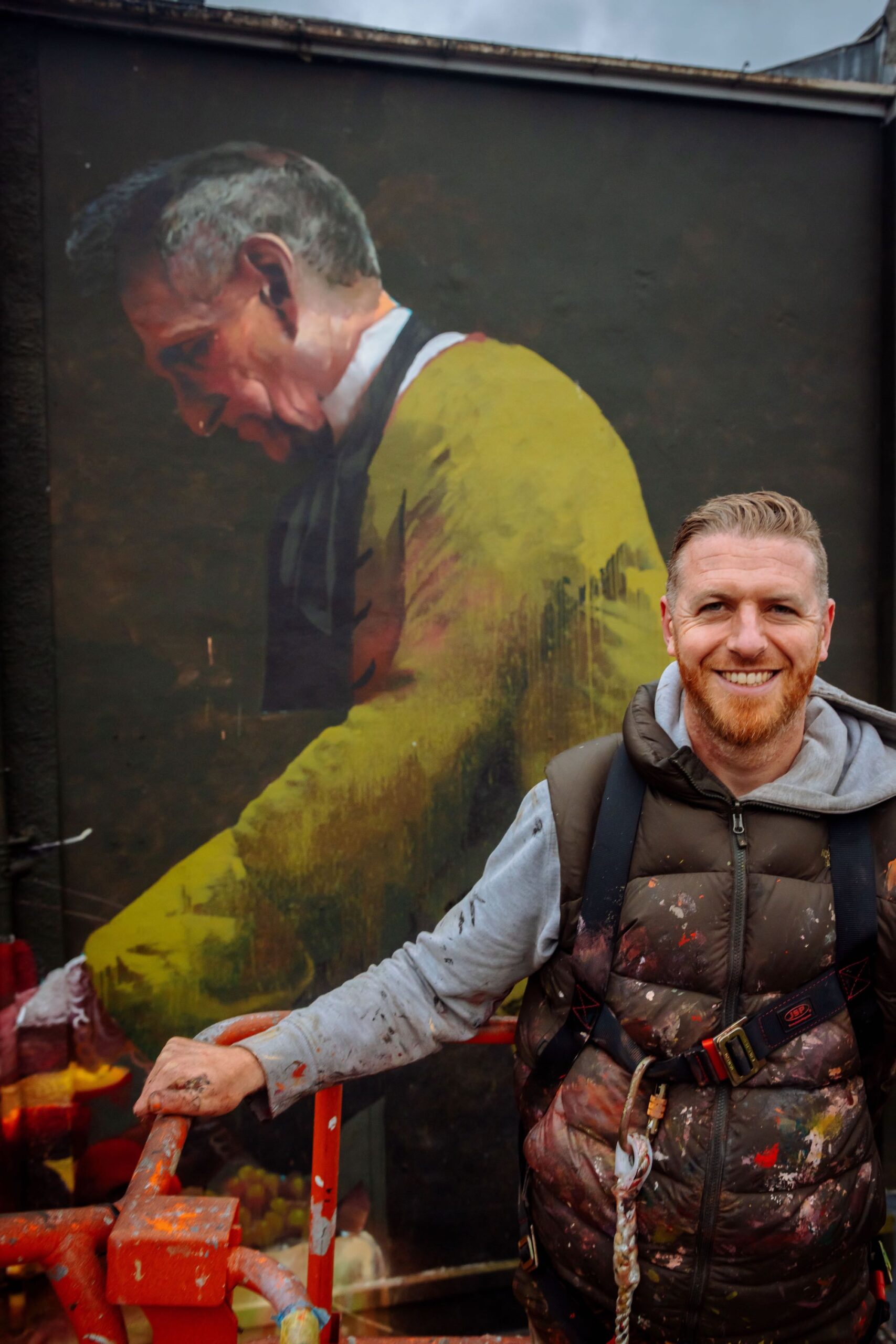 Many local businesses in Cork have rallied behind the work that Ardú do throughout the city, a major supporter is Pat McDonnell Paints, who supplied the artists with some of their materials for this year’s programme:

“Here at Pat McDonnell Paints, we are firm believers in how paint can transform the spaces we live in. We were delighted to support Ardú and their artists bring colour and vibrancy to Cork City.

140 litres of paint tinted in over 22 colours and Conor Harrington talent and vision have given us a modern day masterpiece in a corner of Bishops Lucey Park.” – Aidan McDonnell, Pat McDonnell Paints. 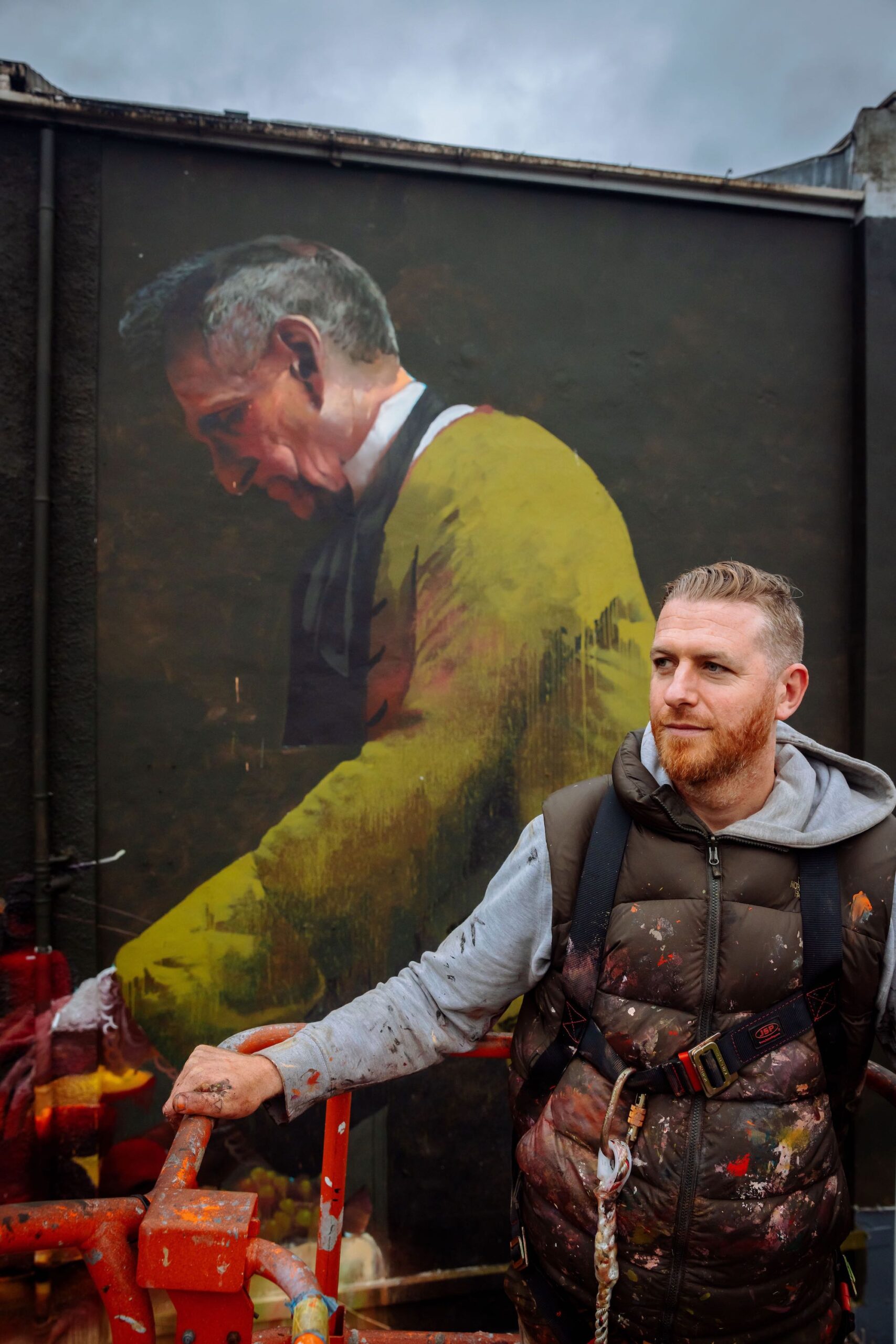 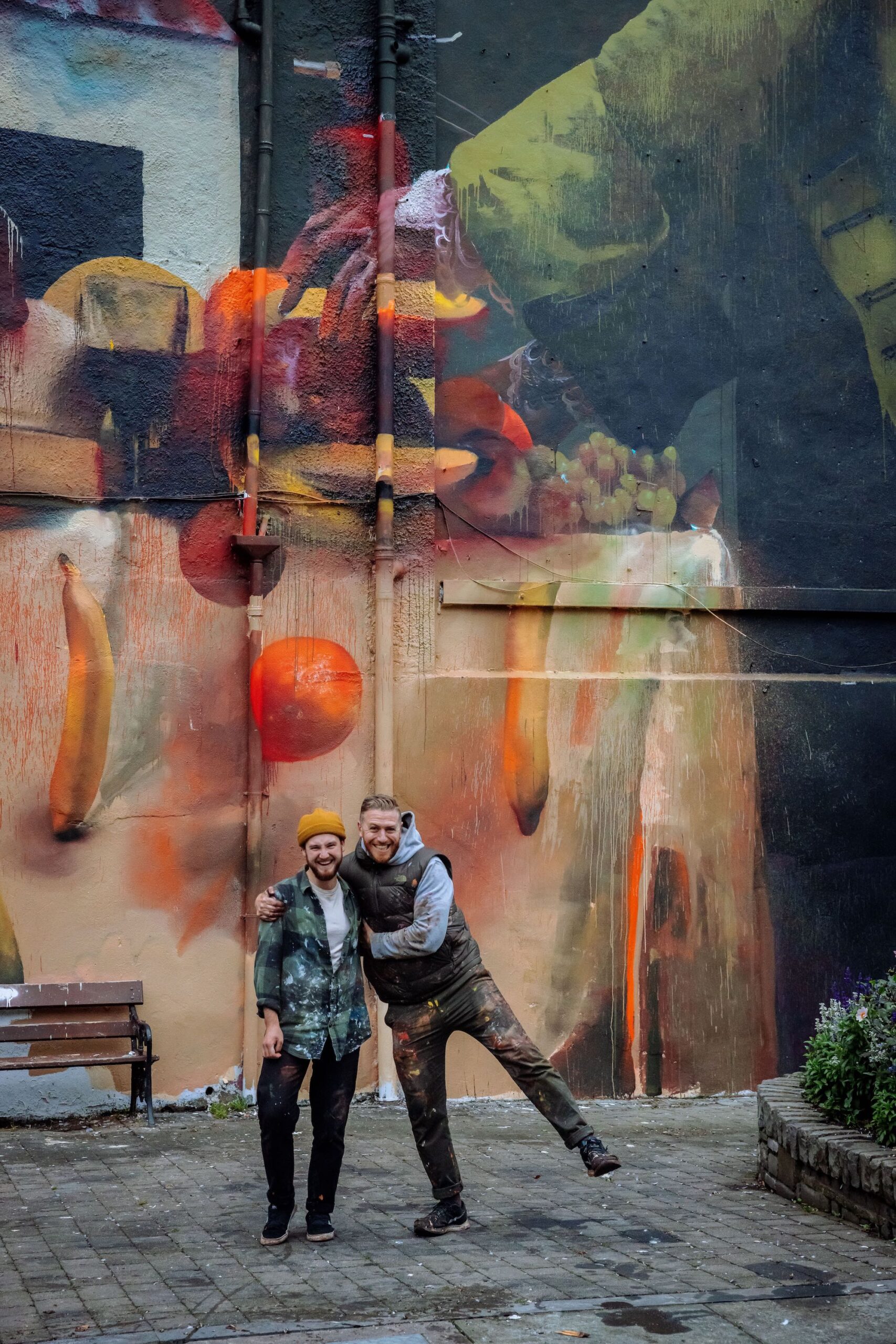 Commissioning artwork from home grown talent of the highest level is the main aim of Ardú, which is supported by Cork City Council and Creative Ireland, and with paint generously sponsored by local businesses Pat McDonnell Paints, and spray paint from Vibes & Scribes.

In order to cover total costs for this year’s event (paying for the artists fees, painting materials, maintenance,  etc.) and to help secure the future of Ardú Street Art Project, the crew need YOUR support.

Ardú’s fundraiser allows for four donation options – €10, €20, €50, or €100 – everyone who donates is entered into a raffle to win a signed photo print of artwork from the 2020 Ardú series, which featured works by artists Maser, Peter Martin, Shane O’Driscoll, Deirdre Breen, Garreth Joyce, Aches and James Earley. There will be 5 winners chosen at random and each winner can select an artwork of their choice. The raffle is available to enter online via bigcartel: https://arducork.bigcartel.com/