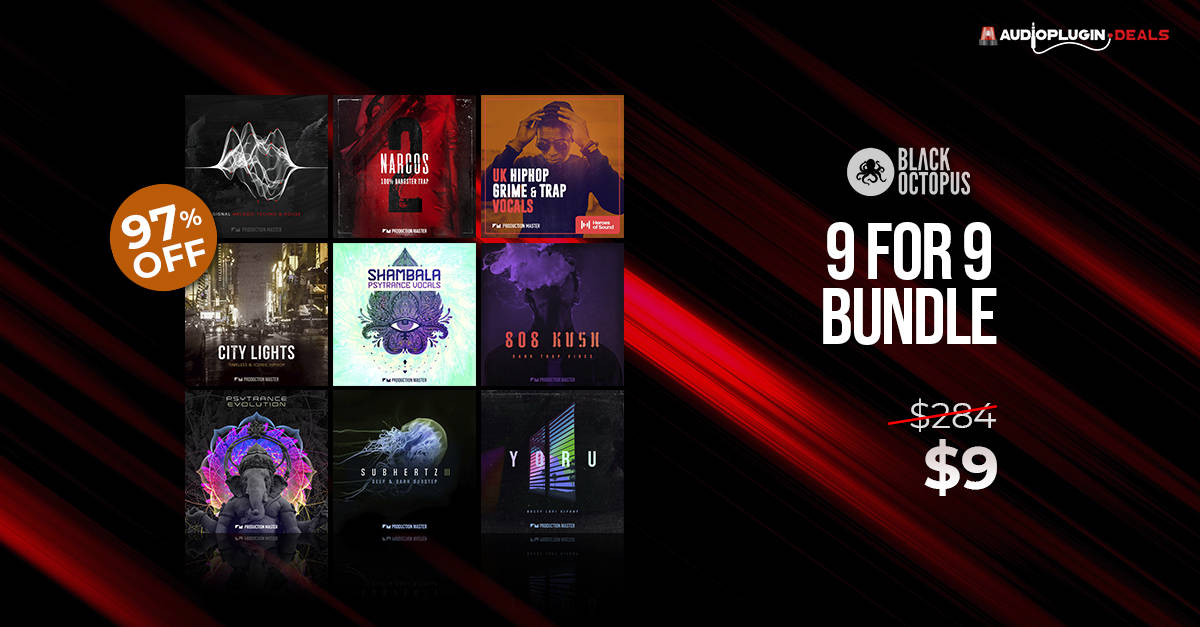 Audio Plugin Deals offers a no-brainer 97% off deal on the 9 for 9 Production Master Bundle from Black Octopus Sound.

9 for 9 Production Master Bundle is available exclusively at Audio Plugin Deals at a 97% discount for a limited time only.

That’s nine sample packs for $9, and it’s hard to imagine not getting your money’s worth. The offer ends November 3rd, 2021, so get in soon if you’re interested.

The nine included packs are:

Between those titles, you get a combined almost 3000 sounds, from Vocal and Drum Loops/One-Shots to Bass Loops, Synth Loops, Atmospheres, and more.

OK, I possibly sounded a little like a salesman there, but I’m already interested anytime I see 97% off. I’m not cheap; I just have trouble saying things like I don’t need that plugin or no thanks, I have enough sample packs. I’m sure most of you suffer from the same problem.

In all seriousness, at $9, there’s no way this bundle isn’t going to be fantastic value for money. The thing is, small purchases mount up, and before you know it, you’re buying every bundle that has a discount(FOMO).

Now, even if something is of good quality, I try my best (often unsuccessfully) to find a current or potential need before buying. Especially with sample packs, it’s so easy to stockpile them and assume I’ll use them eventually.

Luckily, I’m an avid Loopmasters/Loopcloud user and have experience with Black Octopus Sound packs, so I know I like the quality. I know quantity isn’t an issue, so that’s another box ticked.

If I start to go through the individual packs that cover Trap, Hip Hop, Lofi, Dubstep, Psy Trance, House, Techno, and Vocals, I see some I can’t find a need for yet. But, I also see four that I could use straight away; City Lights, Yoru – Dusty Lofi Hip-hop, Subhertz 3, and 808 Kush.

From those four, I especially like City Lights and Yoru. It might be slightly overplayed for some, but I can’t get enough Lofi or dragging the beat. D’Angelo’s Voodoo, and his playing drunk style, is still a go-to album for me.

You might prefer different packs from the bundle, but I’m pretty sure most people will find more than enough to make it worthwhile.

If only everything were either free or 97% off! Cheers to Black Octopus Sound and AudioPlugin Deals.