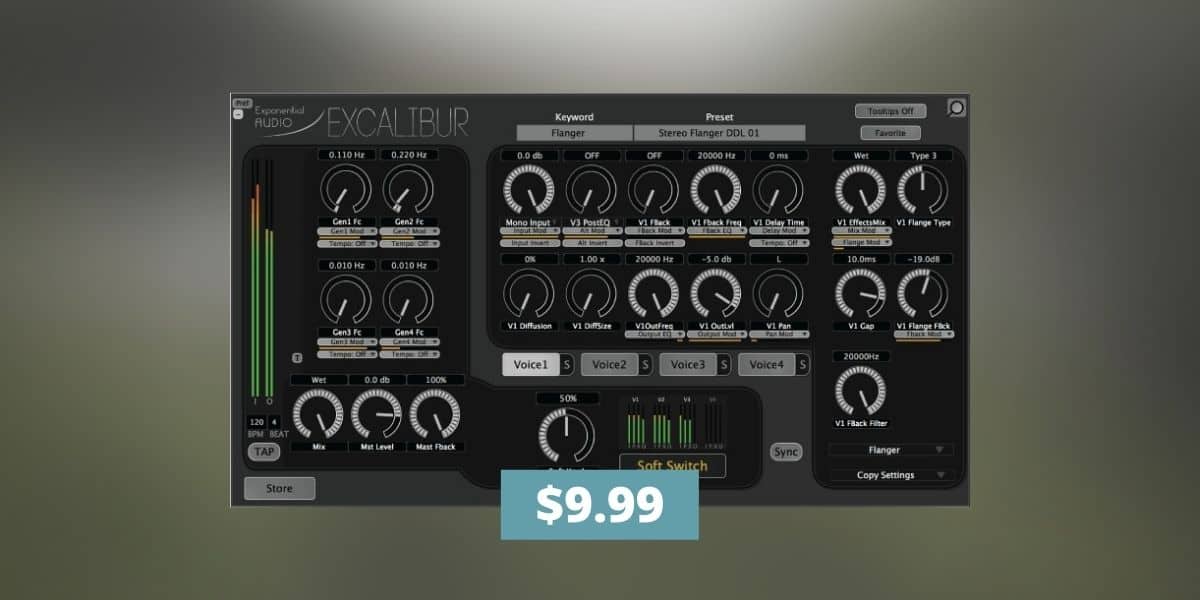 Plugin Boutique launched a no-brainer $9.99 deal on the Excalibur multi-effect plugin by Exponential Audio and iZotope.

And that’s not the only Exponential Audio deal at Plugin Boutique. You can get the R2 Stereo reverb effect for $19.99 until November 2nd, 2021.

Exponential Audio is a company that is known for developing great reverbs. The company’s founder, Michael Carnes, has an extensive history in reverb (amongst many other things), specifically with Lexicon and legendary units like the 960L.

Exponential Audio is now an iZotope company since they acquired the product line in 2019.

Sometimes, when one company is taken under the umbrella of another, people assume that a good thing won’t be the same anymore. But, from what I see, the aligning of these two companies received a very positive reaction.

Excalibur is an incredibly versatile multi-effect. It combines various pitch-shifting, modulation, and dynamic effects into a single multi-FX unit.

It’s one of those plugins that are almost impossible to describe. You’ll understand it much more quickly if you watch the demo video embedded below.

The R2 Stereo reverb plugin has been around for years, and thankfully, it’s had a makeover along the way. I’d never promote style over substance, but the original GUI was so clumsy-looking. It seems the layout remains the same, but everything is more refined and far easier on the eyes.

It’s a fairly feature-rich reverb plugin that comes with over 1200 presets, including many room, hall, plate, and chamber variations.

R2 is often paired with or compared to Exponential Audio’s PhoenixVerb, which shares an almost identical feature set. The significant differences are the Chorus and Gate modules, which are exclusive to the R2 plugin.

R2 is more about adding obvious character to your sound than it is about being realistic (not that it can’t be). Of course, obvious doesn’t have to mean overwhelming; R2 Stereo can sound very musical and tasteful.

That character comes mainly from the Chorus and Gate modules, and there are many ways to put them to use.

You can alter the Rate and Depth of four Chorus types; Pitch, Pitch/Fat, Random, and Random/Fat. Increasing the Rate/Depth, especially on the Fat Chorus types, adds color and texture. With acoustic instruments particularly, you can create a kind of doubling effect when that texture creeps in without making the core sound overbearing.

The Gate module can do many things, like provide a far less convoluted way to apply a ducking reverb, leaving more space for everything else. But, let’s be honest when it comes to Gate and Reverb; it’s all about the Phil Collins snare. Sussudio; it’s why we all got into music in the first place, right? No?

R2 does a lot more than I can cover here, but I want to mention the independent output controls for Attack, Early Reflections, and Tail. I find the Early Reflection controls, especially, to be a very welcome addition.

R2 is new to me, and in all honesty, at full price, I’d probably need to have a project in mind for specific use (I’m not saying it’s not worth it, I just have enough reverbs, and we can’t buy them all). But, at the sale price, it’s one I’m thrilled to snap up, and I’m sure it will pay for itself many times over.

It’s also worth noting that Plugin Boutique offers a free copy of Heavyocity Punish Lite with any purchase this month.