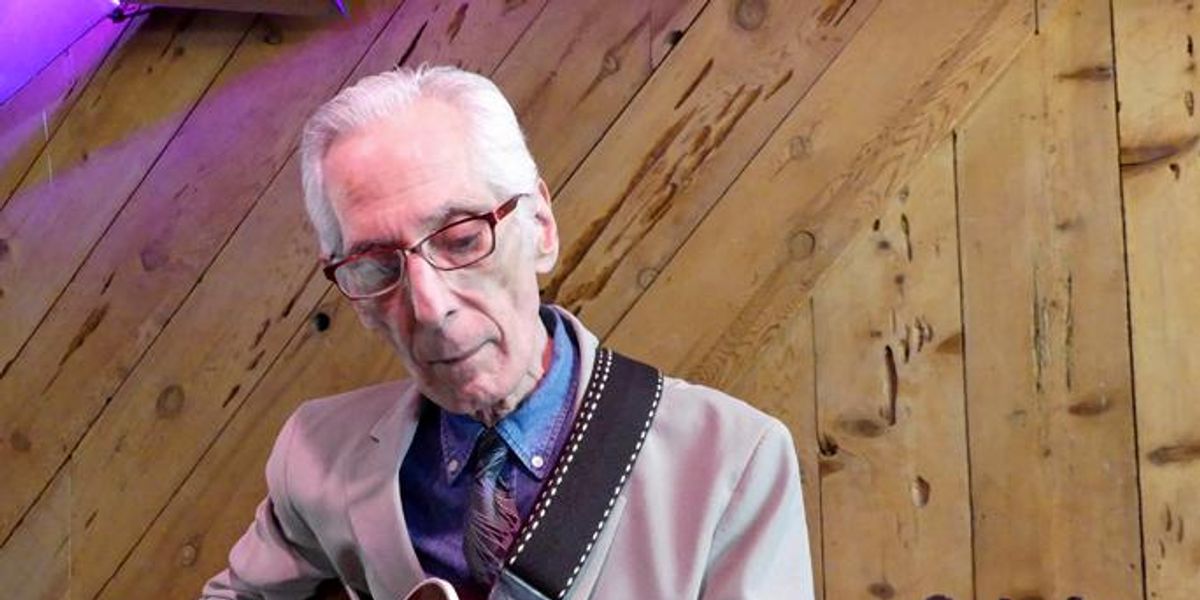 The very first time I heard Pat Martino, I was so mesmerized that I called local Northern California radio station KJAZ (now defunct) to find out who was playing. This was long before we had Shazam and similar smartphone apps that identify music, and if you didn’t get through to the station you were out of luck. Fortunately, I did and was told the cut they’d played was from an album called Desperado. I soon bought others I’d seen mentioned in guitar magazines at the time, including The Visit! and Consciousness.

Pat Martino’s deep impact on guitarists worldwide might come as a surprise to many non-musicians. Though widely appreciated by jazz listeners, his music never had the crossover reach of a Pat Metheny, Wes Montgomery, or George Benson. However, one needn’t travel far within the guitar community to find those who hold him in the same regard as such esteemed six-string company. Look no further than the latter on this list of luminaries.

“I was out on the town, thinking I had conquered New York,” George Benson says in a YouTube clip. “I saw this young kid … and this guitar leaped out of nowhere. And some of the most incredible lines I had ever heard. Everything in it. Great tone, great articulation, and the whole crowd—and it was a black audience—went crazy. And I said to myself, if this is a sample of what New York is, like, I’m getting out of here.”

With all due respect to the more traditional jazz guitarists of the ’60s, Martino tapped into flavors that felt far beyond.

Although Benson’s own output during the ’60s and early ’70s occupied a similar soul-jazz esthetic—high energy hollowbody guitar lines accompanied by organ and other instruments—the list of guitarists who sing similar praise for Pat extends well past jazz circles. On my own Instagram timeline, for example, the diversity of those who’ve replied to my Pat Martino post is telling: groove-meister Charlie Hunter, soundscape scientist David Torn, guitarist and virtual death-metal band animator/actor Brendon Small, blues guitarist/educator Andy Aledort, and Carnatic guitarist Prasanna, to name just a few.

With all due respect to the more traditional jazz guitarists of the ’60s, Martino tapped into flavors that felt far beyond. He added character, especially in the 1970s, a time that has often been portrayed as the dark ages by those representing jazz “purism.” Yet most professional jazz guitarists will tell you that Martino’s work during the decade is considered some of the most essential of our instrument. His sound seemed to move with the times, capturing the era in a way that went well past typical jazz guitar combos. It would be easy to imagine Martino’s late-’60s and early-’70s work fitting into the score of The French Connection, Mean Streets, Shaft, or other culturally emblematic films of that time.

I became aware of Pat Martino during a period in which he was making an astonishing comeback after being sidelined for much of the ’80s. A near fatal aneurism led to brain surgery. This was followed by complete memory loss, including his ability to play. In a story right out of the movies (note to Hollywood film producers: Please make this happen), he made a full recovery, teaching himself to play all over again partially by listening to his own music. Incredibly, he not only reached the highly advanced level where he’d been but was able to pick up right where he left off, developing his art even further.

As if his recorded output and miraculous recovery weren’t enough, Pat’s contribution to guitar education is also remarkable. His series of instructional VHS cassettes for the REH company were essential viewing and became a part of my practice regimen for several years. I credit Pat with enabling me to grasp intimidating concepts. For example, his way of viewing the diminished scale and its relation to dominant 7 chords was especially enlightening.

In modern jazz guitar, all roads lead to Wes Montgomery and Pat was no exception. Much like Pat Metheny—who recently described a youthful period of sounding “just like Wes” on my podcast—Pat Martino forged his own unique sound initially built on Montgomery’s influence. Yet unlike the other Pat M, whose essence of Wes was largely inconspicuous by the time of his earliest recordings, one can clearly hear it, especially on tracks like “Once I Loved” from Martino’s debut as a leader, El Hombre. Yet with each subsequent album, Pat’s sound became more and more unmistakably Martino.

Once I Loved – Pat Martino

One thing Pat and Wes did not have in common was Montgomery’s infectious grin while playing (similar to how we picture Eddie Van Halen). While in the throes of cranking out chromatic lines onstage or posing for publicity photos, Pat, maintained a firm expression of seriousness that might be described as a borderline scowl. It could even be mistaken for darkness, which would be more than understandable after all he’d been through health-wise. Yet meeting him in person, one quickly realized the complete opposite was true: He was the embodiment of the delightful French term “joie de vivre.”

The one and only time I met Pat Martino was in June of 2009, when we were both guest instructors at a guitar camp. Not wishing to bother him—surely, he had more important things to do than converse with little old me—I mentally prepared a quick statement of gratitude fit for a book-signing line in which one is granted a word or two and then quickly shuffled along. Upon being introduced by Premier Guitar‘s own Jason Shadrick, the thing I remember most is being completely disarmed by his big smile and genuine appreciation to be meeting in person. I supposed that perhaps he’d come across my name in a guitar magazine or somewhere similar. Yet, I soon realized his enthusiastic demeanor wasn’t limited to those of us who were VIPs in this context. That same warmth, sincerity, and graciousness shone through unselectively that day, whether with colleagues, students, or others.

It was a year or two later that Pat’s autobiography Here and Now, co-written by jazz bio specialist Bill Milkowski, came out. During a promotional feature in the Philly Inquirer, he made clear that he’d channeled his life experience into true enlightenment. Indeed, the same level of wisdom that many hope to channel by following Eastern spiritual leaders such as the Dalai Lama could be gleaned by this modest but highly skilled musician in Philadelphia. He told the newspaper, “The mind has a way of thinking about things that have nothing to do with the moment, but if I can love my life in that moment, I’m in the right place at the right time.” He went on to say that the aneurysm was “the greatest thing that ever happened to me.”

As strange as that may sound, he makes sense of it with the following statement: “What’s on my mind is a greater focus with more intimate accuracy on each and every moment so that I can truly focus on what life is really all about,” he said. Through his playing and his infinite wisdom, Pat Martino will continue to remind the rest of what life is really all about for many years to come.