Where Do I Start with Sweep Picking? 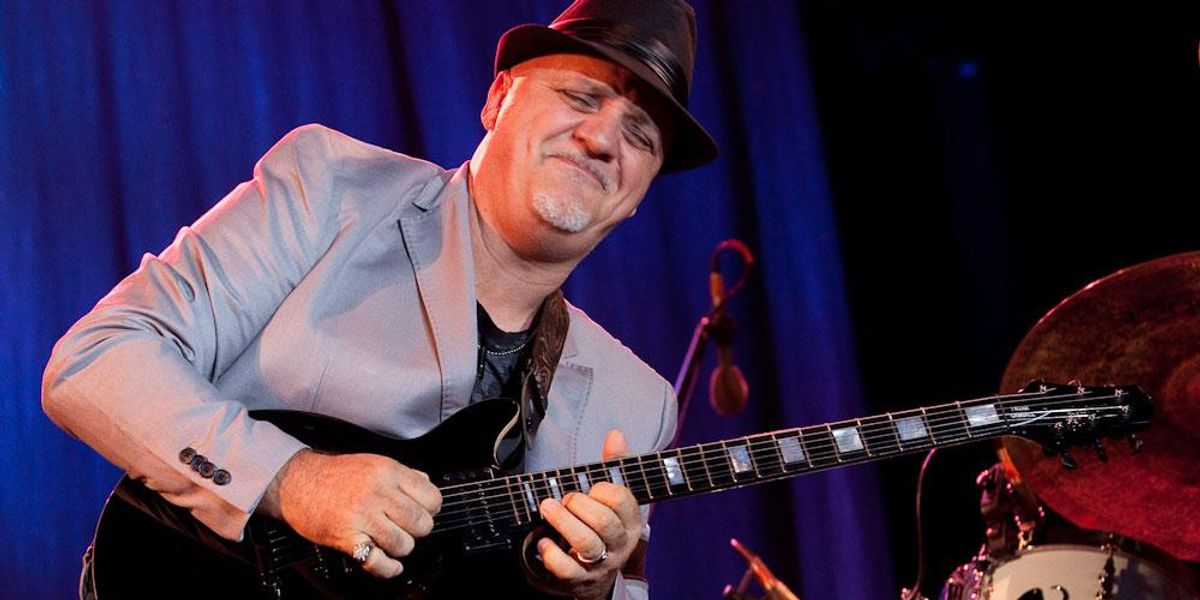 Sweep picking allows us to play licks that normally would be extremely difficult, if not impossible. In a nutshell, sweep picking is playing across several strings with a single, fluid pick stroke. Sounds simple, right? Well, it’s important to focus on keeping the movement fluid and not execute separate pick strokes in the same direction—and that’s what this lesson will help with.

In this lesson we will not only work on rest strokes but ideas that only cover three strings, so as to not overcomplicate things. Half of the exercises will be basic drills to get you started and comfortable with the technique while the other half are more advanced licks to practice.

Let’s dive right in. Ex. 1 is a G major arpeggio (G–B–D) played in the “C” position of the CAGED system. I like to sweep through the ascending section as the directional change feels more natural to me that way, but feel free to play the lowest note with an upstroke as well if that feels more comfortable to you.

Ex. 2 is an A minor arpeggio (A–C–E) in the same position, but this time we’re using 16th-notes to create a rhythmically displaced feel. Practice each example separately to really get comfortable with the rhythmic feel of the triplets and the 16th-notes. An often-forgotten aspect to teaching sweeping is rhythm, especially in the picking hand. Zero in on the rest strokes and rhythmic feel. Try to make it groove.

Now that we’ve worked on both triplet- and 16th-note-based licks, let’s put them together. Ex. 3 alternates between the two. This is a fantastic exercise to really get a feel for the rhythmic intricacies of the picking hand while sweeping. Harmonically, it’s a Bdim7 chord (B–D–F–Ab), but remember: In a diminished chord any note can function as the root.

Since rhythm is such an important and often neglected aspect when talking about sweep picking, let’s take a singular approach for Ex. 4. It’s the same rhythmic figures as in Ex. 3, but you mute the strings with your left hand. Really try to feel the pulse. I like to alternate a few repetitions of Ex. 3 and Ex. 4. I find that whenever I have trouble with any sweeping section, practicing just the picking-hand rhythm for a few minutes immediately improves my playing.

Let’s dive into more advanced musical examples. If you’re new to this technique, spend some quality time with the previous examples and speed them up a bit before tackling these. You don’t have to be perfect, but you should be comfortable with the technique. Go back to them every now and then and see how you improved—but don’t spend forever on one example. If you get stuck, move on and come back to it after a couple of weeks of having worked on other sweep licks. It’ll keep you motivated and expand your vocabulary quicker.

Jason Becker is an absolute sweep-picking legend and Ex. 5 is heavily influenced by his work. It’s mostly the same triplet pattern of Ex. 1, but we’re moving through different diatonic arpeggios in the key of D. Jason’s trademark sweeps move through different inversions of the same arpeggio to create a sequenced or cascading sound. He often outlines specific triads on the top strings to create different harmonies. Here, I added an A major triad over the D chord in measure 1 and a D major triad over G to create movement.

Another well-known sweeping aficionado from the neo-classical school is Yngwie J. Malmsteen. Ex. 6 is a diminished arpeggio run in E minor—specifically over the V chord, which is B. When you play a diminished arpeggio a half-step above the root of the V chord it creates a dominant sound that resolves nicely back to E. It’s a trademark lick that’s all over Yngwie’s playing and very neoclassical sounding. Also note that Yngwie often crams as many notes as necessary into a bar to get to his target note often creating odd subdivisions that can be hard to count. The septuplets emulate that.

Ex. 7 moves into a more modern sounding approach. It’s inspired by the amazing Frank Gambale, who is likely most identified with sweep picking. The line is based on the B minor pentatonic scale and can be used over a Bm7 chord. It’s a very angular and fusion-y sounding line that starts out with a few descending sweeps. There is an added 9 in the pattern before we go into full shred mode and sweep through a few more pentatonic positions until we reach the high B. The last two descending sweeps are a bit tricky as you end the first group on an upstroke and start the next group on an upstroke as well. Don’t worry if you don’t play strict triplets there. It’s part of what makes this lick sound cool. There’s a lot of barring going on but don’t worry too much if some notes ring together. That can create an interesting sound while you clean it up over time.

The last lick (Ex. 8) is what I call a “circular” sweep because you repeat the lowest and highest note and it’s a strict one-note-per-string idea. This example is inspired by John Petrucci’s sweeping licks and Finnish virtuoso Mika Tyyskä, aka Mr. Fastfinger. It has an aggressive chunky sound to it due to all the notes being picked and some notes doubled. The progression is D-major to E-major to Gb-minor and to make it more interesting, I changed the highest note around as it hits the 3rd, 11th, 5th and 13th of each chord, creating a nice little melody on the top string.

With diligent practice sweep picking can be integrated into nearly any style of playing. Just remember to really lean into those rest strokes and make the motions as smooth as possible. Keep shredding!