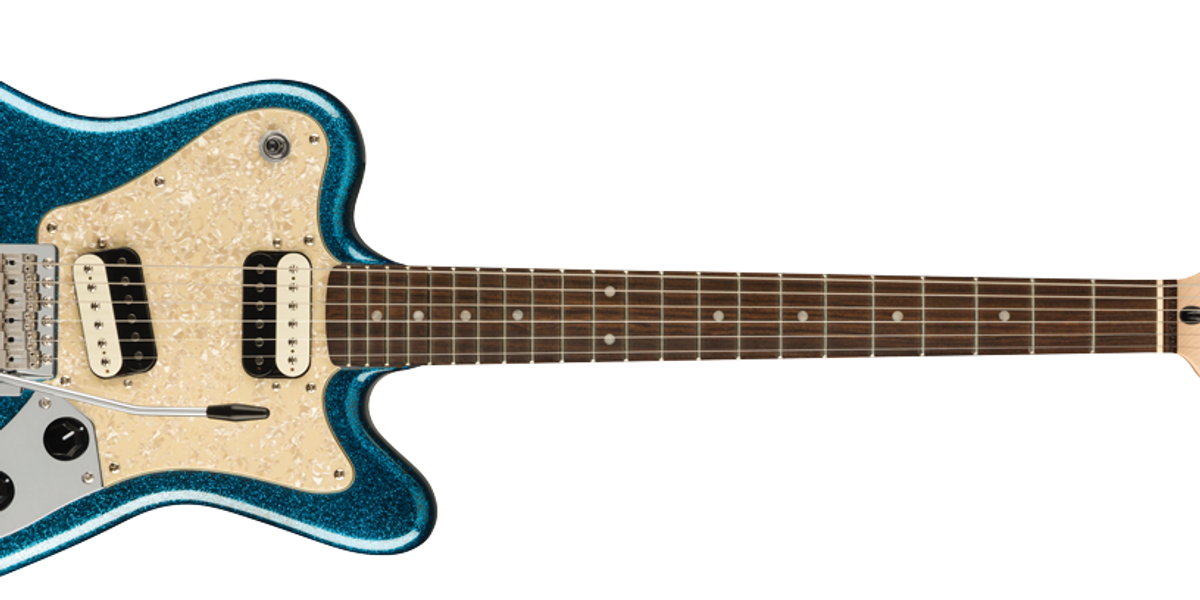 The 1990s marked a time when the eclectic electric guitar underground saw the sun again. When the punk/indie/art tidal wave that gathered momentum over the two previous decades finally crested and crashed, it didn’t just smash guitar-rock templates. It also swept aside a collector mentality that regarded almost everything apart from a few pre-CBS Fenders and ’50s Gibsons as junk. And by the time the big builders caught up to their newly liberated customer constituency, there were a lot of open-minded buyers willing to get weird.

Fender, with a long history of stylish and functional oddities, were in an advantageous position for exploring this new freedom. And Squier’s Japan-built Vista series dropped in the mid-’90s in an effort to slake the thirst of players hooked on the budget allure and en vogue status of ’60s oddballs. For many, the Super-Sonic, with its flipped-and-shrunk Jaguar profile, was the hit of the bunch, and over time it took on its own semi-legendary status. Fender even built a version of their own in 2013 as part of its Pawn Shop series—an unusual case of the parent brand borrowing from a Squier design. It doesn’t take long playing the newest China-built, Paranormal-series iteration of the Super-Sonic to see and hear why it has persisted and endured. It’s a comfortable, compact, and fleet-feeling instrument that still deviates from design dogma and inspires novel playing approaches.

Legend has it that the Super-Sonic was inspired by a picture of Jimi Hendrix playing a Jaguar. (Go ahead, do an internet search. You’re in for a few treats.) The Super-Sonic isn’t quite as curvaceous as a Jaguar and its waist is less pinched, like an original Duo-Sonic. The poplar body’s dimensions are more compact, too—more like a Mustang. But the proportions give it an ultra-light, hot-rod feel that almost inevitably stokes snotty, punky, and irreverent playing approaches when you pick it up. If ever a guitar could inspire a riff before you even play it, this might be the one.

The design is not without quirks. And the extent to which those quirks become complications depends on your playing style. If you’re seated, the stubby upper horn can feel blunt resting against the ribs. And when worn low with a strap, the heavier bass side of the guitar can tip away from you a touch. On the upside, the slightly contoured neck heel makes working the high side of the 22-fret neck a lot more comfortable.

The inclusion of no-cover humbuckers on the original Super-Sonic was almost certainly influenced by Kurt Cobain’s Jaguar and Mustang modifying habits. On the ’90s versions, the humbuckers were all black. Here, they’re in the more stylish zebra configuration. But it’s hard to avoid imagining how cool this guitar would look with chrome humbuckers gleaming against the sparkle blue finish.

Because each pickup has a dedicated volume knob, center-switch-position blends can yield many variations.

For a player that favors vintage-y single-coils—especially the kind you’d find in an old Jaguar or Mustang, the Squier Super-Sonic’s humbucking pickups can come off as hot and rather set in their agenda—an issue compounded by the lack of a tone control. But if the pickups themselves aren’t super dimensional, they exhibit a nice, even output from string to string and produce scads of cool sounds.

As its enduring appeal suggests, the Super-Sonic isn’t a novelty or niche instrument. It’s a high-quality guitar for the price. The sparkle finish lends a playful sense of flash, and it flat-out rips as a player. But it’s also capable of subtlety. And its unique sense of balance and short scale encourage cool chord shapes and voicings and fast and fiery lead attitudes. Some aspects of the design—the toggle switch placement and upper horn, primarily—might find you longing, ironically, for traditional Fender design elements. But at just $429, you’re much more likely to find inspiration than aggravation in this inverted amalgam of classic Fender curves