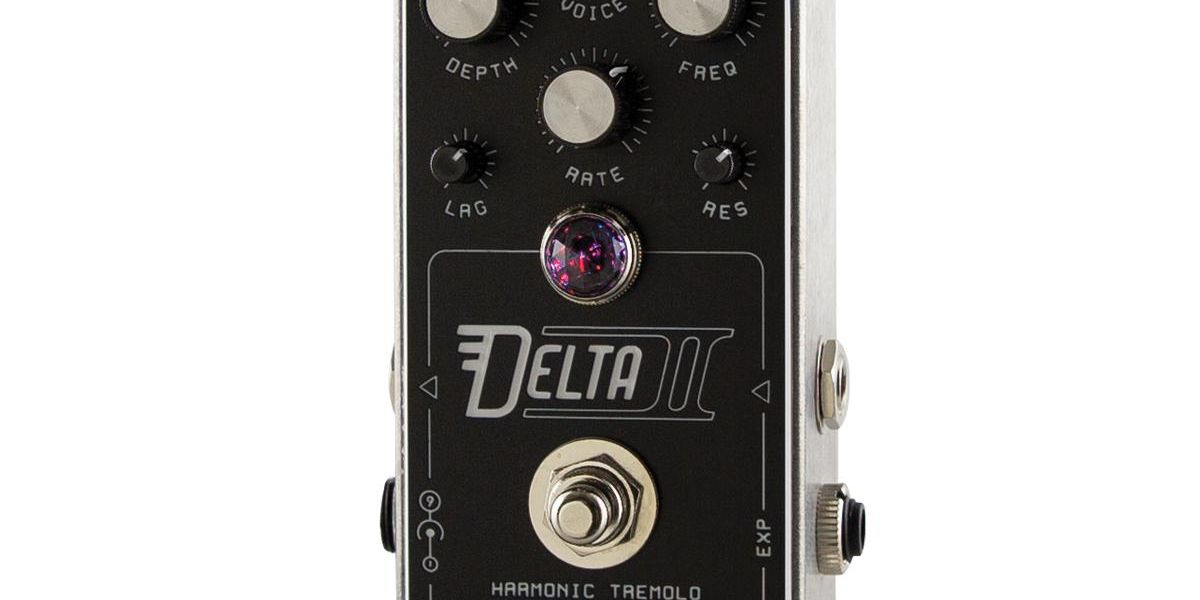 More than seven decades on, tremolo remains one of the most mesmerizingly delicious and mysterious textures in music. And while it’s now a familiar part of the popular music lexicon, it has lost none of its power to evoke mystery, oceanic depths, faraway lands, and deep space.

Harmonic tremolo is perhaps the most mysterious tremolo of all. Rather than use volume attenuation to achieve its hypnotic pulses, harmonic tremolo uses dual band filtering and LFOs to emphasize high and low frequencies in a rhythmic, alternating pattern. The resulting effect is, generally speaking, woozier than the stuttery textures of amplitude tremolo—and capable of suggesting and inducing very dreamy states of mind.

Harmonic tremolo emulations are relatively plentiful these days, but few are as fun and capable of spanning old-school sounds and twisted textures as Spaceman’s new Delta II. It generates the deep, woozy, pitch-stretching modulations that make early-’60s-style harmonic tremolo so fundamentally appealing. It can also stretch the effect to extremes with little likeness to tremolo at all.

The Delta II walks the line between complexity and simplicity adroitly. The interactive nature of Delta II’s controls might frustrate players used to fast, predictable results from one of two knobs. But it’s worth investing the time to grok how they work together, because those relationships can be the ticket to very distinct and individual variations on harmonic and amplitude tremolo.

Even the two most recognizable controls on the Delta II—the depth and rate—behave in comparatively unusual ways. Much of the first third of the depth’s range, for instance, is subtle enough to be imperceptible at certain settings. The rate knob, meanwhile, hits the maximum modulation rate of a Fender amp tremolo before you even get to the 12 o’clock position, and at extremes it pulsates at rates so fast that it sounds more like ring-modulated fuzz than tremolo. On some pedals, these expansive parameter ranges might be annoying, but the Delta II’s precise pots make it easy to find sweet and familiar settings.

The small lower left knob called lag enhances the Delta II’s flexibility considerably. It shifts the phase relationship between LFO outputs. At full counterclockwise, the two outputs are in phase and produce less phase-y amplitude-tremolo-style pulses. As you twist it clockwise, the phase relationship changes—inducing ever wobblier variations on the harmonic tremolo flavor. It’s a smart addition for players who occasionally like the directness of amplitude tremolo.

At extremes, it pulsates at rates so fast that it sounds more like ring-modulated fuzz than tremolo.

All three of these voices can be recast depending on how you use the resonant filter (regulated by the “freq” control) and the resonance knob. And much of the real magic in Delta II’s control layout is down to how effectively the frequency, voice, and resonance controls work together as a very powerful EQ section. In the studio—or as you refine a live band mix or arrangement for a given song—you can use various combinations of these controls to carve out very specific harmonic spaces. And given how deep these tremolo throbs can be, the ability to effectively emphasize a frequency band here and cut another there opens up many arrangement possibilities. Once you master the practice of fine tuning them, you can make tremolo pulses more integrated or distinct within the sound of instruments occupying a given frequency range.

Billing the Delta II as a harmonic tremolo nearly undersells what the pedal can do. Apart from generating liquid modulations that would tickle any brown-panel Fender or Magnatone fan, the Delta II can dish synthy ring-modulated chirps, rotary speaker-like colors, and snorkely filtered pulses. Studio hounds will be thrilled with how the frequency, resonance, and voice controls enable surgical sculpting of trem tones so they can be situated in very specific harmonic spaces.

The Delta II isn’t without its quirks. You can easily go down a rabbit hole searching for ideal EQ, filter, and resonance profiles. But it takes just a modicum of practice to get a lot of extra mileage out of those controls, and they are full of surprises. If you’re looking for classic harmonic tremolo formulas exclusively, there are more direct and inexpensive ways to get there. For more curious tremolo fans, however, the Delta II is a treasure chest of sweet, deep, and demented modulations that can be fantastically transportive.