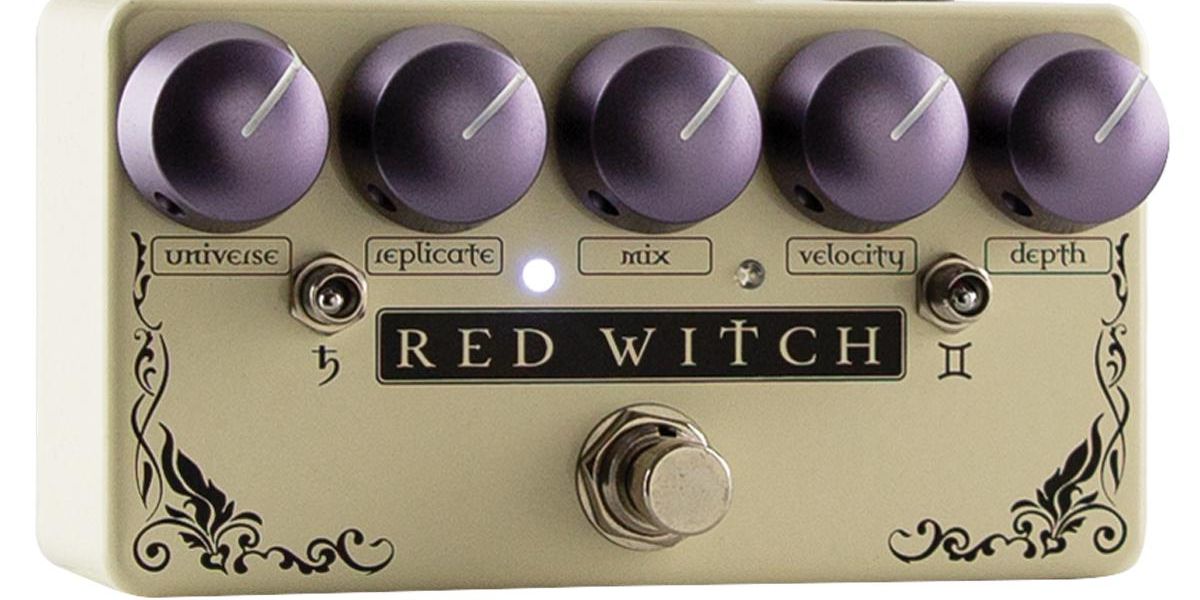 Delays with modulation are common, but delays that do deep, varied modulation colors often live on the more complex side of the user-friendliness spectrum. Red Witch’s Binary Star digital delay occupies a practical middle ground between basic modulation-enabled delays and menu-stuffed beasts that can weigh you down when you’re in a fast-moving, creative mindspace. The Binary Star’s design is ideal for spontaneous artists and performance thanks to a sensitive control set that offers easy access to familiar and far-out textures.

The Binary Star’s lengthwise orientation will probably bug some board-space-obsessed players, but it facilitates creative, interactive operation and fast adjustments on the fly that wouldn’t be as easy with a set of small knobs crowded into a narrower space. The aluminum alloy controls feel super-precise and substantial and are a tactile delight. They also have expansive range, which can be both tricky and a treat as you get to know the pedal.

Some control names could be less opaque, but understanding how they work—and work together—quickly becomes second nature. The universe knob controls the delay time, which can range up to 1100 milliseconds depending on where you set the leftmost mini toggle. In the left toggle position, the maximum delay time sounds and feels like it’s somewhere around 400 milliseconds—a comfortable spot for players used to old-school analog delays. In the right toggle position, the available delay time reaches its maximum, but this mode also changes the functionality of the replicate knob, which controls the number of repeats. In the long-delay mode, the replicate knob becomes much rangier and more sensitive. Around 12 o’ clock you can toe the line between long washes of repeats and self-oscillation, and the controls are sensitive and forgiving enough that you can quickly correct for gain changes, or a more aggressive effect mix, and still maintain that perpetual verging-on-oscillation wash. Not everyone will immediately grasp the need for the long/short delay toggle, but it makes the Binary Star capable of moving from unusual ambient textures to conventional echoes quickly, with a throw of the switch and a few fast knob adjustments.

There’s nothing too unconventional about the mix control, but the sensitivity, range, and smooth interactivity with the other controls makes it a varied paintbrush. You can venture into wet mix regions without feeling altogether estranged from the dynamics and nuance in your picking attack.

If you need a little something extra behind a somber, minor-key chord progression to suggest the destabilization of the time/space fabric, this is it!

The modulation controls are perhaps the most challenging facet of the pedal’s performance envelope to master. Depth settings beyond the first 5-10 percent of the control’s range can get very weird very fast and overpower your output with woozy, pitch-shifted colorations that can sound like five tequila shots too many. At lower mix controls, however, these high depth settings become unique sub-textures than can enliven simple parts in unexpected ways. Deep, slow modulations mixed low and tucked behind a slow chord arpeggio became a ghostly, ominous, undulating backdrop for chords and single-line melodies. If you need a little something extra behind a somber, minor-key chord progression to suggest the destabilization of the time/space fabric, this is it!

Better Seen in a Clean Machine

The Binary Star’s digital repeats tend toward the clean end of things. But given the depth of textures that can be achieved with the modulation section and the wealth of overtones that can live in some of the pedal’s reverberative washes, this is no bad thing. Analog-sounding echoes are possible using the right toggle in the left position (which activates a darker, filtered voice) and using a minimum of modulation, which simultaneously adds a hint of tape-wobble and gauzy mystery to the decays. In shorter delay mode, this was among my favorite settings.

The combination of sensitive, range-ful potentiometers and smartly ergonomic, well-tuned, interactive controls make the Binary Star a real pleasure to work and create with. For certain players—and I count myself among this set—the Binary Star is an ideal combination of streamlined control, warm traditional echoes, and flat-out weird ones. More control-oriented players and digital deep-divers will lament the lack of tap-tempo, presets, and expression pedal functionality. But if you’re primed to move beyond simple analog and digital delay and long for a little adventure without getting lost in the digital menu weeds, the sensitive and often intoxicating Binary Star represents a sweet spot in the echo firmament.