How to Master Heavy Metal Rhythms 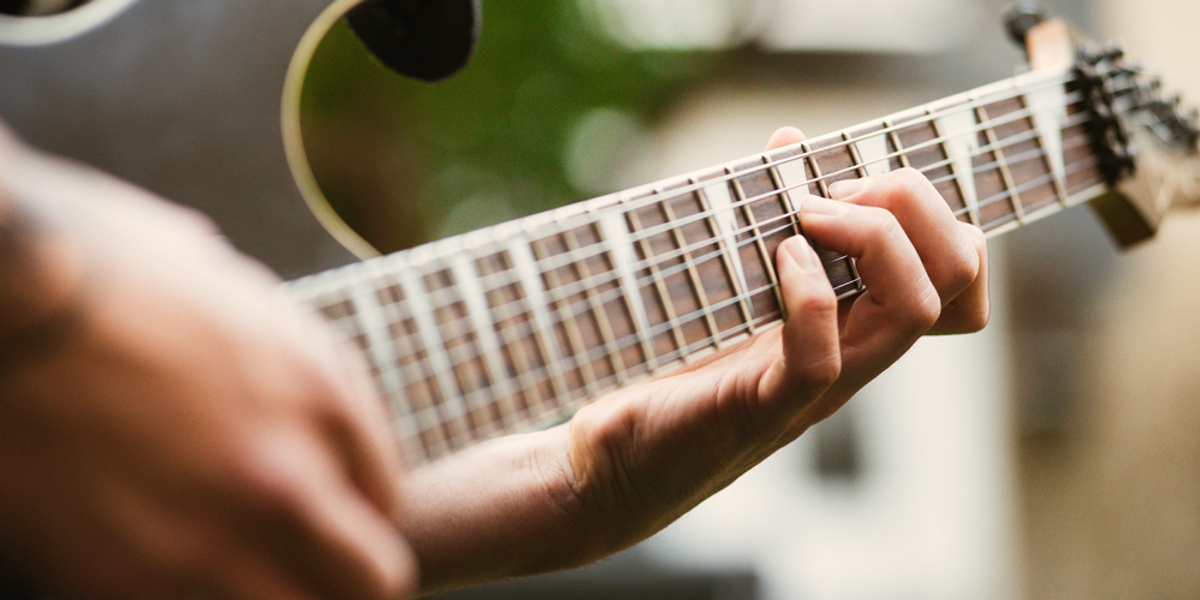 When musical comedy duo Tenacious D proclaimed, “You can’t kill the metal/the metal will live on,” they were actually preaching some serious gospel truth. Since its genesis in the late ’60s and early ’70s, the genre known as heavy metal (along with its myriad offshoots and subgenres) has been one of the most consistently popular, enduring, and evolving. Because many beginner students start out by strumming cowboy chords on an acoustic steel-string, making the leap to playing metal seems as daunting as trading in a pedal tricycle for a Triumph Rocket 3. But by mastering a few basic picking-hand moves, anyone can tap into the visceral thrill and unmatched power at the heart of “The Metal”!

As amp manufacturers began incorporating more gain (aka overdrive or distortion) into their preamp stages, players altered their techniques to exploit this added sustain. Dialing up the gain meant adding overtones to your sound and this made full-voiced open chords indistinct and muddy.

A simple solution to this sonic dilemma was to pare down chords to just the root and 5. These “5” chords (also known as power chords) are harmonically ambiguous (lacking a 3 that would designate them as either major or minor) but sound thick and full when cranked through an overdriven amp.

Ex. 1 shows some power chord re-voicings of commonly played open shapes. I use a first-finger partial bar on the E5 and A5, and rest my first finger on the 5th string to mute it while grabbing the G5. The key here is to play less strings than you normally would, thus eliminating thirds completely.

One common—but surprisingly unnamed—picking-hand technique employed when articulating power chords involves attacking the lower strings with a short, aggressive “slap” or “push” motion that originates from the wrist as opposed to a traditional strum which originates from the forearm.

Ex. 2 takes our chord shapes from the previous example but adds the element of syncopation by striking them on the off beat, or the “and” of beat 4. This rhythmic displacement of power chords was a distinct technique exploited by AC/DC’s Malcom Young, one of the architects of heavy rock rhythm and it sounds undeniably cool against a solid backbeat.

Another power chord pioneer, Black Sabbath’s Tony Iommi, developed a style that relied heavily on the moveable two-finger power chord grips used in Ex. 3. This was largely done as compensation for an industrial accident that sliced off the tips of several fingers on Iommi’s fretting hand, but ultimately gave Black Sabbath a distinct riff-based sound that would become the blueprint of most heavy metal styles. Among other things, this economic grip enabled legato movement between chords as evidenced by the slide on beat two of both measures.

While playing power chords through a high-gain amp or stomp box provides epic sustain, to churn out driving percussive eighth-note rhythms it’s essential to master the palm mute technique. The name palm mute is something of a misnomer since it’s actually performed by resting the outside edge of the picking hand on the bridge just enough to make constant contact with the lowest strings and dampen them. Make sure that the bridge and not the strings are bearing the weight of your hand or the sound will be too choked off. Also remember to strike those low strings with a short aggressive wrist motion, as opposed to a traditional strum motion. I tell my students that strumming is a bit like using a paint roller to cover the walls while palm muting is akin to using a cut brush to paint the corners. It may take some trial and error to find the right equilibrium between contact and pressure with your fretting hand, but once you’re in the sweet spot, try playing the palm muted power chord progression in Ex. 4.

Stylistic nuance can be achieved with the palm mute by accenting certain beats. Very often the accented chord stabs can be enhanced by only playing single root notes on the unaccented articulations. In Ex. 5, the previous chord progression is now enlivened by adding an accent on the first beat of each measure [ONE and two and three and four and] and playing a single palm-muted root rote for the rest of the measure.

Once you’ve mastered accented palm mutes, they can be strategically deployed to add rhythmic complexity and sophistication to progressions by syncopating certain beats. A common pattern shown in Ex. 6 takes a measure of eighth-notes and divides them in a 3+3+2 grouping with the accent coming on the first eighth-note of each sub-group [ONE-and-two-AND-three-and-FOUR-and].

A two-bar variation shown in Ex. 7 divides the 16 eighth-notes in a 3+3+3+3+2+2 accent pattern [ONE-and-two-AND-three-and-FOUR-and one-AND-two-and-THREE-and-FOUR-and]. These two motifs are based on the Afro-Cuban clave beat and show up as the rhythmic underpinning in literally thousands of songs of all genres.

We’ve been relying heavily on downstrokes so far, but basic fluency with alternate picking techniques is a must-have skill for playing rhythmic and melodic patterns with speed and accuracy. One of the challenges beginners seem to have with alternate picking is approaching strings on an upstroke. In Ex. 8 the fourth note of the pattern moves to an E on the 4th string and should be picked with an upstroke motion. Practice this minor scale move slowly, making sure to place all the alternate strokes correctly. Once you have it up to a reasonable speed, try playing it twice in one position then sliding it up one fret to the next position. Continue moving the drill all the way up the neck.

This and all previous examples can be played with a metronome, but keep in mind that a metronome can’t teach you rhythm. It can only refine your accuracy and help increase speed gradually. I strongly recommend learning to grasp each exercise slowly and correctly before dialing in Mach 5 metronome tempos. Accuracy leads to speed, but speed won’t lead to accuracy and developing a strong accurate picking hand is essential to mastering heavy metal guitar.