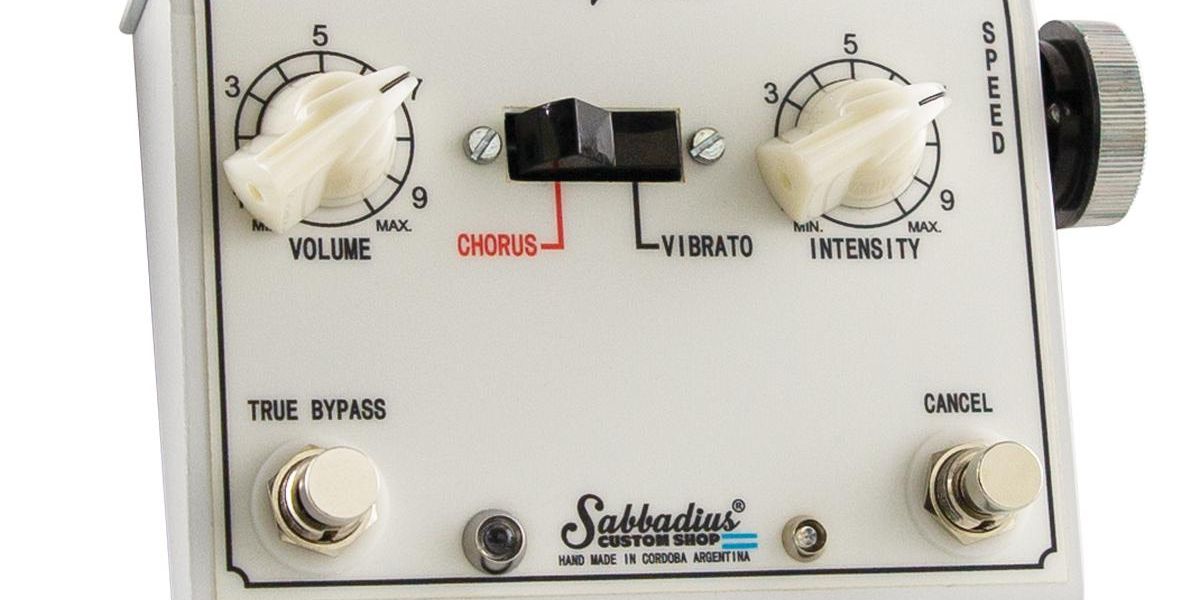 Argentina’s Sabbadius is not messing around when it comes to Uni-Vibe-style pedals. Their authentically styled and photocell-driven Funky-Vibe pedals come in five incarnations—including models designed to replicate Jimi’s Uni-Vibe sounds from Woodstock and the Fillmore East shows that birthed the Band of Gypsys LP. They also build Funky-Vibes intended to replicate variations built in 1968 and ’69.

To this already overflowing stable, they now add the Tiny-Vibes—two compact (4″x 5 1/8″) descendants of the Funky-Vibe that use circuits that are nearly identical to their larger siblings, stuff them in a more compact enclosure, and switch out treadle-operated speed control for a side-mounted rate-control wheel. I had the pleasure of testing the Tiny-Vibe 69. While I’ll confess to longing for some of that expression control, particularly because the pedal sounds so much like an original, it was still a real pleasure to get lost in its deep, immersive washes of modulation.

The original Uni-Vibe is a well-studied circuit, and its associations with Jimi Hendrix and David Gilmour alone assured that each of the minor differences between the pedal’s early iterations would be dissected down to the last solder. Generally speaking, Sabbadius’ 68 Funky-Vibe and Tiny-Vibe pedals replicate the circuitry and sound of the original Honey-built version of the pedal, which some aficionados find more intense at certain settings. The 69 pedals (and the later Shin-Ei-built Uni-Vibes that inspired them) are regarded as smoother and a bit more elastic, or “chewy” in the parlance of phase heads. In even simpler terms, you can think of Sabbadius’ 68 as “Machine Gun,” while a 69 is The Dark Side of the Moon.

If you can find a dealer where you can try all these pedals alongside each other, it would be pretty cool to dig deep into the micro-differences between them. With just the 69 on hand, I didn’t have that opportunity. But whether you’re chasing Hendrixian highs or slow-burning Floyd-style undulations, the 69 sounds super convincing and, at times, thrilling.

More so than many pedals, the Tiny-Vibe can feel like a collaborator in spontaneous composition, and there’s a real, visceral thrill when it happens.

Sabbadius doesn’t take shortcuts to making the Tiny-Vibe sound like the real thing. It’s a true photocell-driven optical circuit (where modulations are activated by a pulsing lamp and light-dependent resistors). The pedal also runs exclusively at 18 volts, so you’ll have to get a dedicated power source or allocate the 18-volt slot in your power supply.

If you’ve had the pleasure of playing a vintage Uni-Vibe or one of the more authentic replicas (like the Funky-Vibe), you’ll recognize the controls used here. An output volume control adds gain that can range to a fat overdriven tone that dovetails well with the Tiny-Vibe’s modulations. The intensity control, which has a lot of subtle variation, is also a carryover from the vintage Uni-Vibe, as is the chorus/vibrato switch. The two controls you won’t find on a vintage Uni-Vibe are the true bypass switch, which bypasses the modulation and gain entirely, and the cancel switch, which takes the modulation out of the equation and leaves the preamp in the line—a very nice tone sweetener depending on your tastes.

The Tiny-Vibe is thoughtfully assembled and sturdy. The side-panel placement of the speed knob, and its substitution for expression pedal control of modulation rate, is a design factor you’ll need to consider depending on the density and layout of your pedalboard. It’s not easy to operate the speed knob when it’s situated in the middle of a gaggle of other stomps, so situating it at the right side of a board is key. But even when situated ideally, there is no substituting the functionality, feel, and expressive outcomes of using an expression pedal. If this capability is key to the way you interact with a vibe-style pedal, you may want to consider the full-size Funky-Vibe.

Tiny-Vibe’s deep, underwater chorus tones aren’t easily replicated with most inexpensive vibrato units or phasers. The optical circuitry and high headroom enabled by the 18-volt power make the chorus tones extra liquid and creamy. Driven by heat from a silicon Fuzz Face-style circuit, the Tiny-Vibe is deeply Band of Gypsys-like. Filthy fuzz textures mesh seamlessly with the phase undulations, and the modulation rarely seems to completely obscure melodic or picking details. It’s exhilarating to hear the fuzz shift in texture and harmonic makeup as notes, bends, slurs, chords, and double-stops collide with various spots in the phase wave. Everything from screaming, peaky highs to deep, wavy low-end wash leap to the fore depending on your phrasing and timing. And it’s easy to see why Jimi embraced the Uni-Vibe at one of his most improvisational phases—there is an organic give and take that occurs when you use the Tiny-Vibe which creates happy accidents and nudges you in unexpected directions. More so than many pedals, the Tiny-Vibe can feel like a collaborator in spontaneous composition, and there’s a real, visceral thrill when it happens.

Without fuzz, the 69 just as easily takes on the slow, stony, luxurious waves of Gilmour’s parts on “Breathe,” and sounds distinctly more elastic than most phasers. The intensity control also enables very pretty variations that can be subtle or dizzyingly deep.

If you’re not wildly dependent on the phrasing possibilities derived from expression pedal operation, it’s hard to imagine a more satisfying way to get vintage Uni-Vibe sounds. The compact size is a big plus, and the speed wheel is effective, just in a different way than a treadle. There’s a very good chance that once you dive into Tiny-Vibe’s deep, luxurious waves, you’ll be hooked.