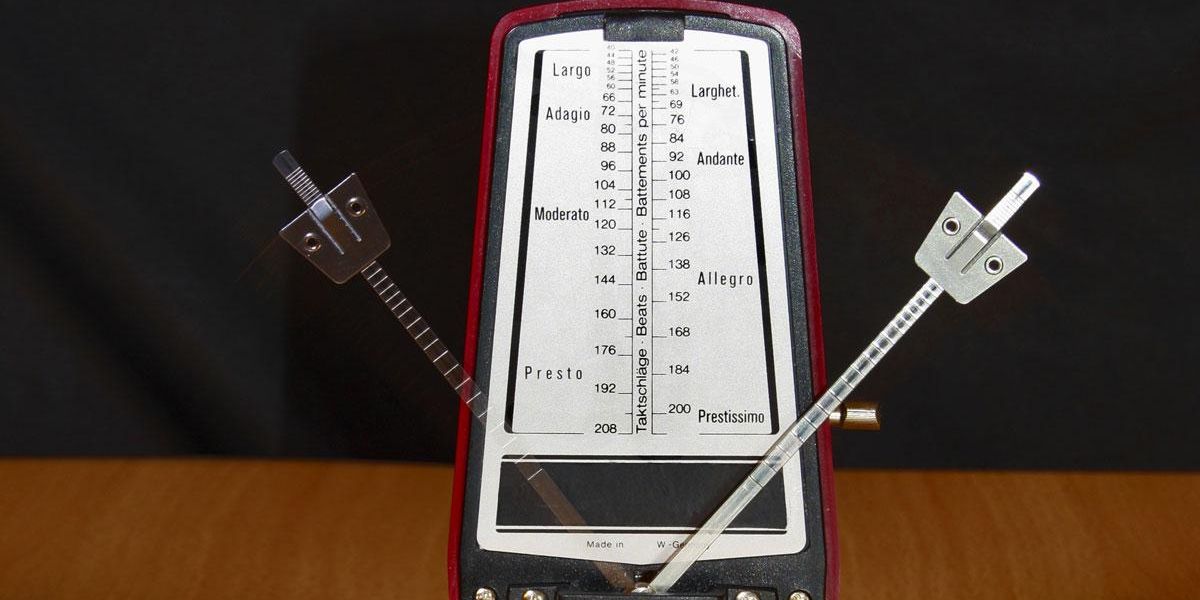 Playing in the pocket is the most important thing in music. Just think about how we talk about great music: It’s “grooving” or “swinging” or “rocking.” Nobody ever says, “I really enjoyed their use of inverted suspended triads,” or “their application of large-interval pentatonic sequences was fascinating.” So, whether you’re playing live or recording, time is everyone’s responsibility, and you must develop your ability to play in the pocket.

So, what is bad time? It’s when people rush and speed up the tempo or drag and slow the tempo down in an unmusical way. If your quarter-note pulse is uneven, you can’t lock in with what the band is doing because the time keeps moving. If somebody’s fills are all wonky and don’t land right, that usually means they are not subdividing and are just stuffing notes into the measure haphazardly. These players don’t realize what is happening. Don’t be one of these players. To develop your own pocket, you will need two things: your guitar and a metronome. A better groove, and a better ability to subdivide the beat, will lead to better phrasing and more control of what you want to play.

The first three examples are designed to eliminate your reliance on the first beat of the measure. Practicing with the metronome on all four beats of the measure is a very common way to practice scales and chord progressions. Remember that in most styles of music, the snare drum is on beats 2 and 4 of the measure. Practice with your metronome as if it’s a snare, where the click is on 2 and 4. (A note about tempo markings: Usually the tempo is listed at a quarter-note level, but with the metronome on beats 2 and 4, it’s marked as a half-note. So, if the half-note tempo is listed as 120 bpm, the quarter-note tempo would be twice that, or 240 bpm.)

Ex. 1 is a G7 arpeggio played in 3rd position, with half-note tempos of 100, 125, and 150 bpm. The recording of this example has a count off with the clicks on 2 and 4. If these tempos are initially too fast, start with a slower tempo where you can play the example cleanly, putting each note directly in between the clicks of the metronome. You can even start with just a single note at a comfortable tempo, getting used to what it sounds and feels like to put a note directly in between the metronome clicks.

Ex. 2 is the A minor pentatonic scale (A–C–D–E–G) in 5th position, played first in half-notes and then again in whole-notes. This example is designed to help you switch gears between different rhythms.

Ex. 3 is the C major scale (C–D–E–F–G–A–B) in 7th position played in half-notes and whole-notes, but at faster tempo. If you practice different types of scales and arpeggios in this way, you’ll discover spots where you may rush or drag the notes.

Technique issues like switching strings or playing a single note on a string (instead of two or three) might affect your time feel. You will also have a better sense of where beat 1 is without having to hear it from the metronome. The best way to keep your quarter-notes in the pocket is to subdivide the beat while you’re playing, but especially when you’re not playing. Subdividing is the best way to keep yourself honest about where the time is. Ex. 4 is a subdivision tour de force. It’s also humbling or irritating depending on your perspective. Set the metronome to 40 bpm and play one note per click, then two notes per click, then three notes, four notes, etc. until you reach the limit of your picking technique. It’s been a few years since I’ve worked on this exercise myself, so I’m maxing out at eight notes per click, but was able to get up to 10 notes at one point. Work on each subdivision by itself before tackling the whole thing. You’ll probably find that you’re able to subdivide more accurately even before you master this exercise.

The last three phrasing exercises are intended to eliminate your need to play on the first beat of the measure. Played over a 12-bar blues in A, each example uses a different rhythm or phrasing structure where you will need to count a lot of empty space to play these rhythms correctly. Ex. 5 is deceptively simple, where you play only on beats two, three, and four of each measure. It takes more concentration than you would think, so be careful that you don’t fall back into playing your usual stuff.

Ex. 7 aims to expand your phrasing, creating longer lines by playing a two-bar phrase almost entirely in eighth-notes. The challenge to this exercise is beginning on the “and” of one in the first measure and ending on the “and” of four in the second measure. In each of these examples, practice each rhythm by itself on a single pitch with a metronome, focusing on counting the spaces and playing that specific rhythm. Then, try adding different chord tones or scales when that rhythm becomes internalized.

After working on these examples, play over a track and focus on one concept at a time to see if you really have it under your fingers and in your ears. Always remember to keep things simple to begin with. There’s plenty of time to make things complicated later on. Cheers!