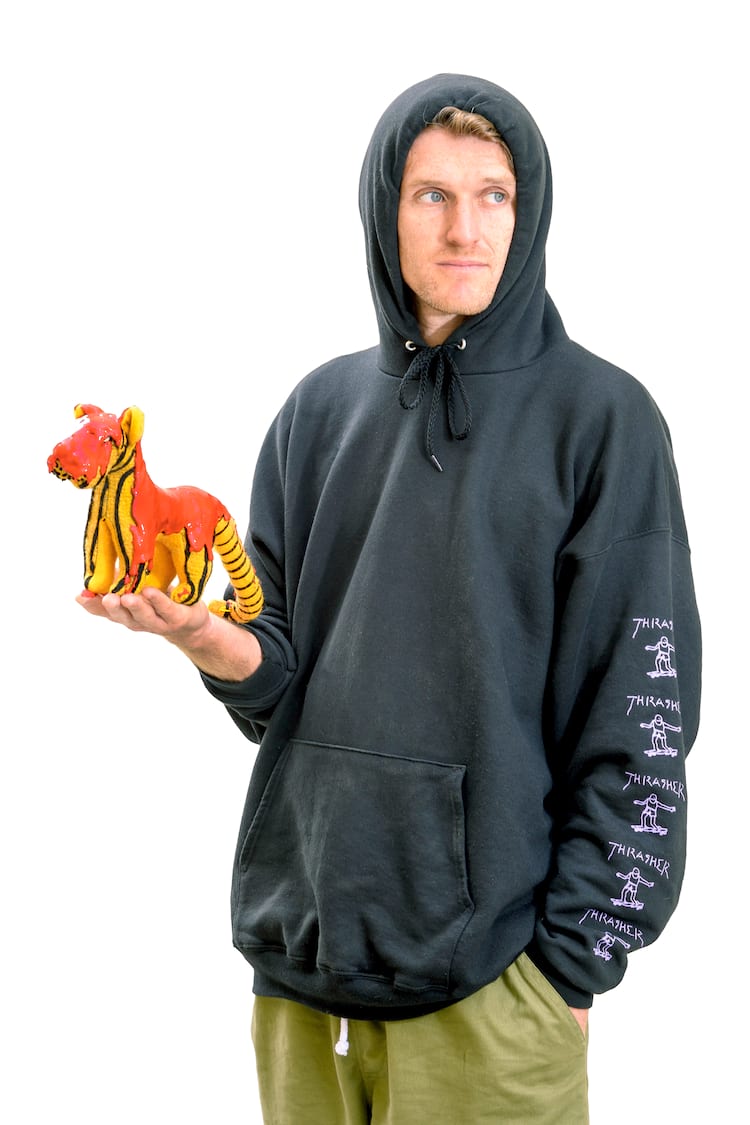 Words and photos by Jon Sptizer

Dilo’s been on a years-long spot-killing spree. He’s gone from the 2019 Am Scramble to his Boss Fight pro part and now this most recent Red Tiger offering, a five-minute onslaught of big pop and tall drops. Catch up with our guy as he talks sketchy trips, heavy rips and his 2021 SOTY pick.

Dilo went harder than ever for his Red Tiger part. Do not miss this

What’s up, John?
I’m just at Baker Boys right now, skating a bit. It’s been a hectic week between filming last-minute shit and helping out with art stuff for this video part. I feel like I’ve been scrambling every day to get stuff handled. I’m stoked, though. Everything’s coming together sick.

You seem to pump out so much footage. There’s got to be some overlap between projects. How long have you been working on this part?
I think the oldest trick in this one is from late January, so it has been the past ten months or so I’d say. Yeah, I’m definitely overlapping stuff at times, juggling multiple projects. I finished the 561 part that dropped earlier this year in January and dove straight into filming for this part. Meanwhile, Poobert was wrapping up his Flora Episode 2 video, so I was making side missions to SF to finish that. Then Luis approached me about a trip edit they were working on while I was in New York for the summer. I could contribute more stuff if I stayed a bit longer, so I extended my trip to make that Rosarito video the best I could. That was all while I was just holding most of the best stuff, working on this part mainly. 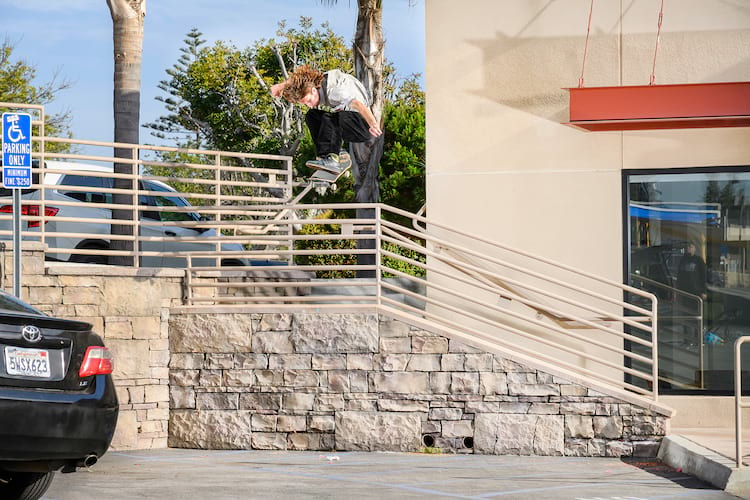 Kickflip over the rail while the window homie watches

Well, it’s all coming to a finish so you can start to relax. It seems you’ve been getting pretty hands on with some behind-the-scenes stuff. I’ve seen you working on some board graphics and creating cover art for videos. How did that start?
I got an iPad about six months ago and downloaded some programs to doodle and see what I can make with it. I always loved to draw and just create things. I knew it would be an investment that would snowball into cooler stuff eventually if I kept learning the programs. 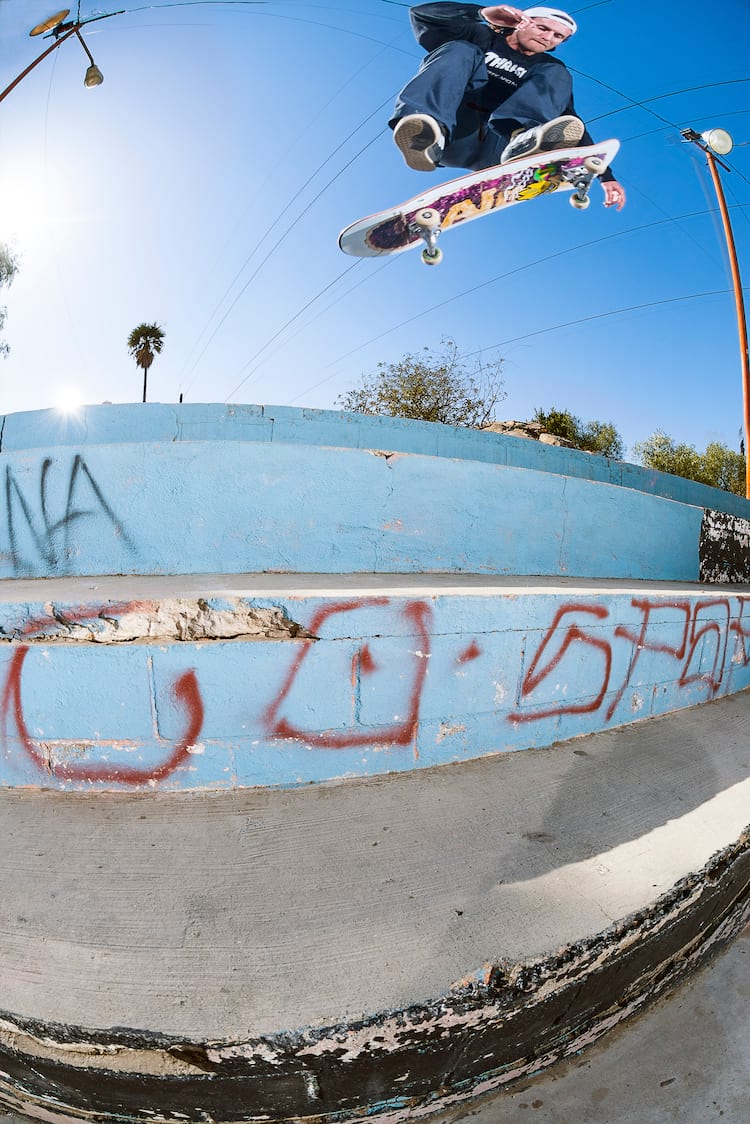 Bruised heels are part of the game when you’re always hoppin’ blocks. Frontside biggie down four

We’ve been hitting the road a bit this year since COVID has calmed down. What are your favorite and least favorite places traveled to this year?
My least favorite was Tijuana, probably. The skating was super sick and the squad was epic, but it was just so sketchy there. We saw a newspaper headline that read, “Decapitated head found in a park.” My favorite has to be Europe, though—seeing everyone again in Copenhagen, then Barcelona for a month, it had been way too long.

Europe was way less sketchy than Mexico. What happened towards the end of the Barcelona leg of the trip?
I bruised the shit out of both my heels in one attempt. I’m still healing up from that, actually. 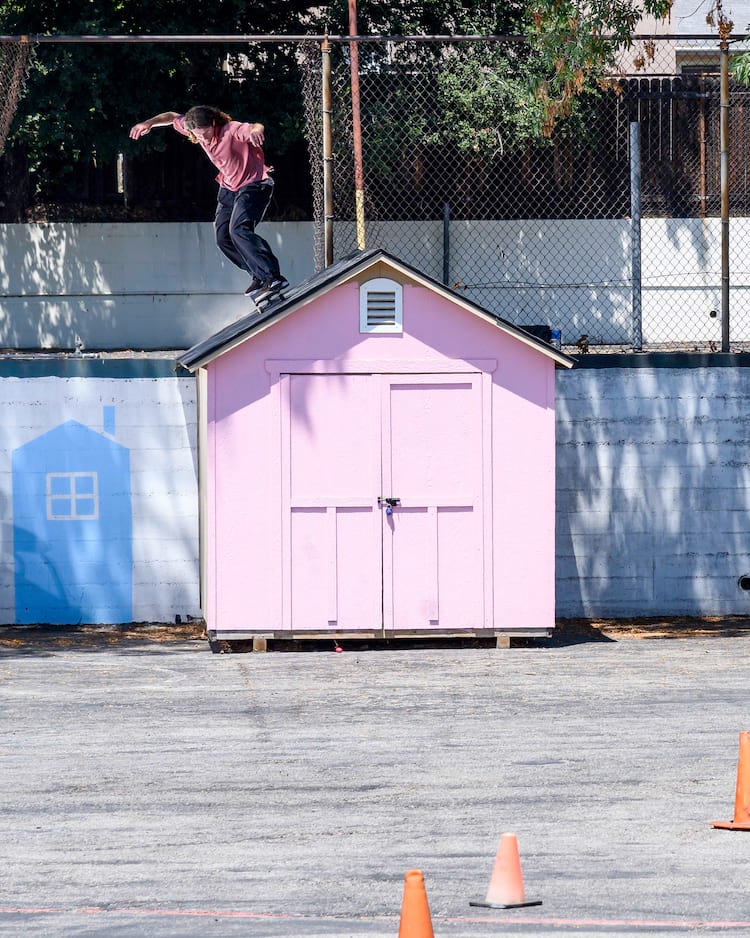 John can make a manual pad out of anything. Color-coordinated nose manny on the shed

Did those heel bruises hinder you finishing the part?
I mean, we had a large bit filmed already. I was just trying to go for broke the last couple weeks. I ended up just getting broke. I was stuck in Spain for ten more days, not able to even put my shoes on. I was still enjoying myself, though. I rode the bike around. Max was hurt, too, so we were both just chillin’ hard. 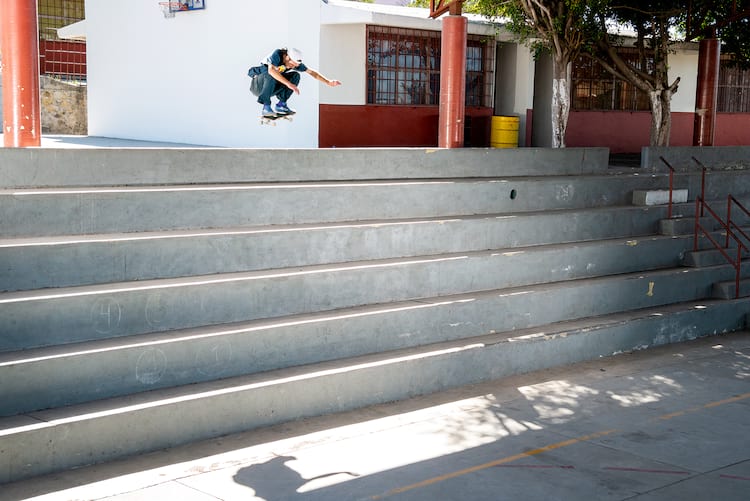 Dilo hops and drops a nollie frontside 180 for the ages

What was the hardest trick you filmed for this part?
So many tricks were just war. Fakie flip the long gap was one that comes to mind. A lot of the last tricks were a serious mind battle to overcome, you know? Nose manual over the 13 was psyching me out. The trick at Parallel was fucked—fakie tré fakie manny fakie tré. I sweat out everything I’ve ever drunk and it took a couple days to make.

That manny trick was brutal to watch you try. It looked like you went swimming with your clothes on by the end. What’s another dream manny combo?
I don’t know anymore. After that one I’m fresh out of ideas. They always creep up, though. 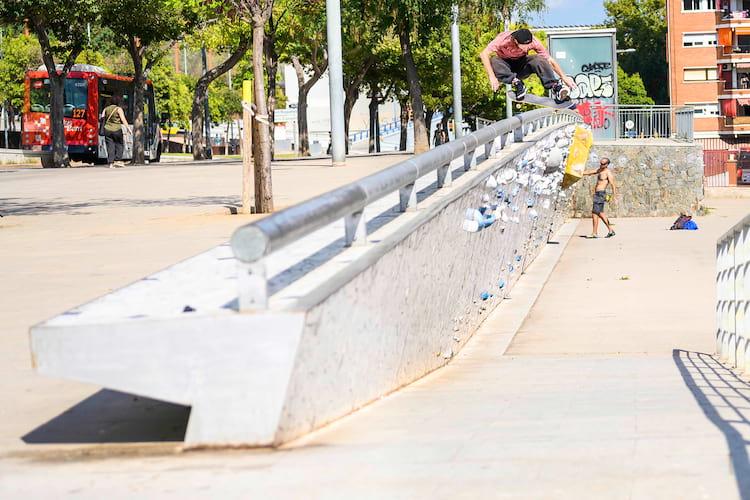 You can never go wrong with the classic kickflip. John jumps one over the climbing wall

The Pink Panther song is super sick. How did that happen?
It was just a random idea I had and pitched to Nick Andre. He helps out making music for a lot of stuff that’s come out on the site. I had heard a slowed version of the Pink Panther theme and thought it sounded so crazy and kind of ominous. I was like, Damn, with some tweaks and different pacing this could be epic. Nick really brought it to life, though. That is kind of what conceptualized the whole Red Tiger idea. It’s been a lot of fun bringing what I can to this more than just my skating.

Flying a nollie back heel over the fence

There has been some talk in the Instagram comments about a four-letter title at the end of the year. Any thoughts on that?
People love to stir the pot on the Internet. I’m just skating, trying to do my best, you know? Sometimes you get a rhythm going and you’re filming so much and lose sight of it all. You’re just feeding off this energy and creating stuff the best you can. That’s how this year has been feeling for me. I just feel fortunate to have been able to do the skating I have done, ‘cause I could have just gotten smoked like I did in Spain, but straight out the gate. I just want to skate hard and put out my best stuff, ‘cause we don’t have forever to do this type of skating. I’m currently healthy, able-bodied and have the fire in me to keep it going. I have inspiring friends around me. I just want to be a pro skater that 12-year-old me would be proud of. I would always think a lot when I was younger about if I ever got a chance in this skate game, how I wouldn’t take a moment for granted. I’m trying my best to see that through. Skater of the Year is like out of this world, larger than life. It’s flattering if anyone wants to see me in that light, of course, but my pick is Chima, though, all day. 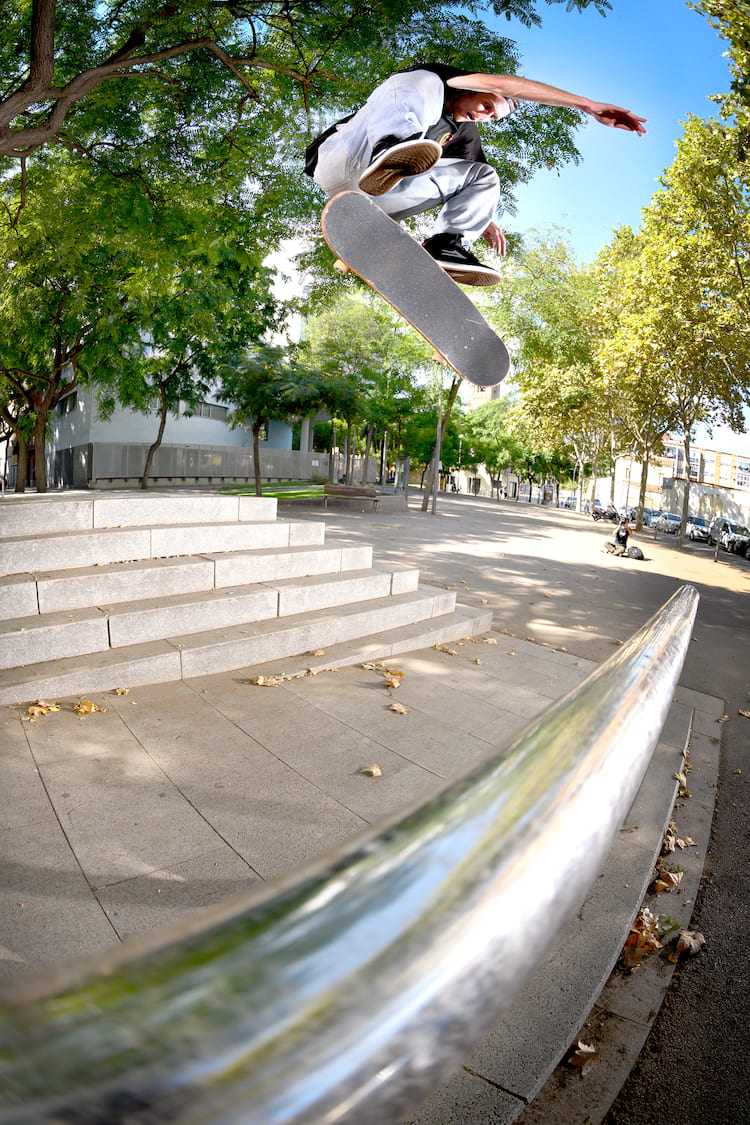 Should we talk about shoes?
I mean, I have been wearing some skateboard shoes recently and it has been really satisfying for me to put them on each day, like in a moral sense. That’s about all I can say. I’m hyped for what’s to come. That’s all that matters to me.

At the end of the day you only got to make yourself happy, so that’s rad. I’m stoked for you. You got anything else you’re working on?
Shake Junt’s Shrimp Blunt video deadline is this month. Not sure when it will be released. Gronze full video drops soon. I got some stuff in there that I’ve contributed from a trip I went on with Max. That’s all I got on the horizon. 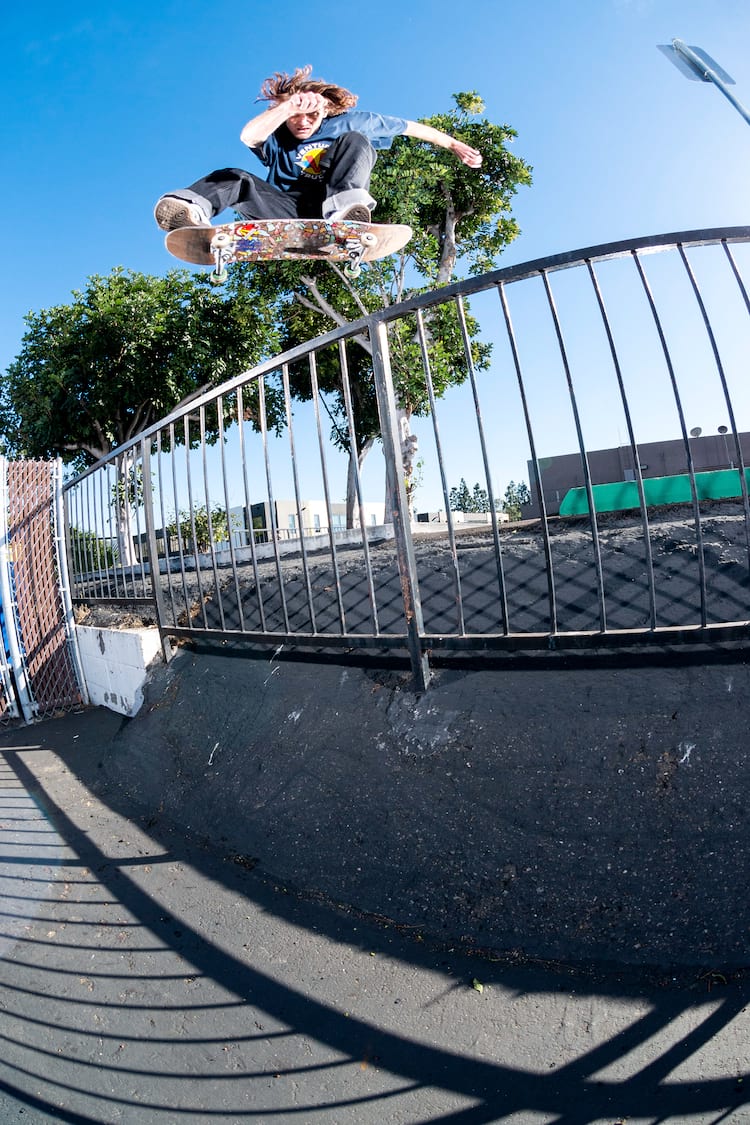 Got any shout outs you want to give before we wrap this up?
Thank you, Luis, for everything, Devin, for filming, Bobaj, for editing, Spitzer, for shooting, Nick for the song. Fuck, dude, so many people to shout out and thank. Titi and Yuri, for letting me have you guys in this part with me. It means so much. Everyone at Thrasher for the love, always—Cole, Tony, Burndog. Shit, man, I miss Hambone so much. I thought about him a lot filming for this part. I texted him one day to come meet up. It was like I knew he was gone but my brain rejected that thought. I broke down a bit in my car after. Love you, Joe. I know you’d have been the first to text me the morning this part hits the site. Is it too late to dedicate all this to Hammeke? Joe Hammeke forever. Tell your friends you love them. 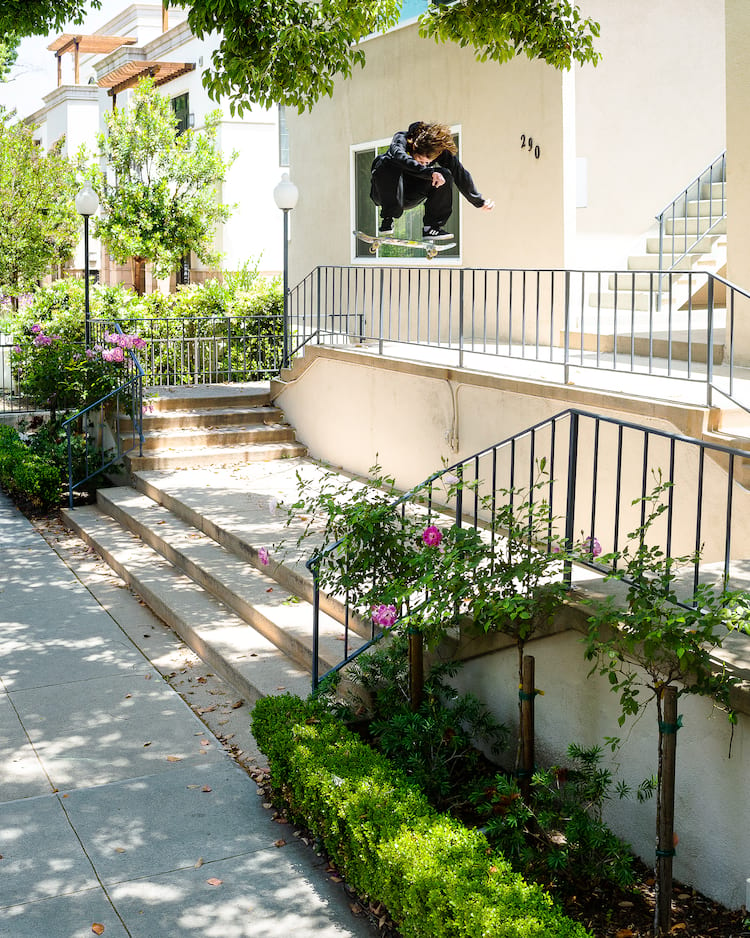 John’s always up for a battle. It only made sense that this monstrous switch heel ended up in the mag’s My War department. Run that new part back one more time then hit the bar-hop hunt    Photo: Burnett