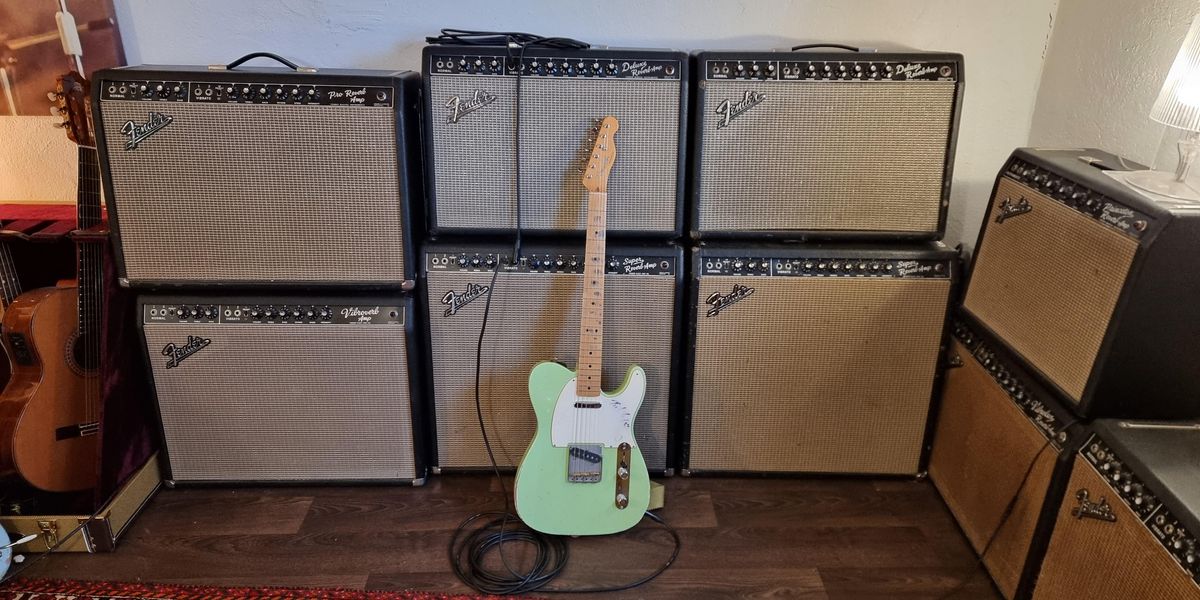 This column is not for the faint of back, but the rewards of such potentially heavy lifting are great. In my previous columns “Like Peanut Butter and Chocolate: Classic Guitar & Fender-Amp Pairings” (May 2020) and “Finding Perfect Tones in Imperfect Amps” (January 2021), I’ve discussed classic Fender amp and guitar pairings and how to EQ and tweak amps to get ideal tones. Let’s take it a step further and discuss how to combine multiple amps to achieve even more complex, richer tones.

The voice of an amp is determined by a lot of factors: volume and EQ knob settings, preamp and power amp design, transformers, caps and tubes, and, most importantly, the speakers and the cabinet. Throw in a pedalboard and you have quite a few elements in the signal chain that creates your tone. I have learned that I need very few pedals on my pedalboard—a lot fewer than I see in magazines or ads from pedal or pedalboard companies.

My suggestion: Instead of more pedals, add one more amp. Two amps with different speakers and different tone and distortion characteristics will give you layers of sound that you can’t create in a signal chain where every factor is added in series. I recommend experimenting with parallel signal chains a lot at home before trying it live. Multiple amps are louder and make monitoring and PA settings more difficult, so you should have your tonal recipe together before testing it on the gig.

Let’s quickly mention a few ways to split your signal. The best is using an ABY pedal. ABY pedals with buffering will take your input signal and output two equal, full-strength signals that are as resistant to noise and interference as the input signal. Be advised, this can potentially create some phasing and noise issues in your amps. A simpler way to split the signal in vintage Fender amps is by using inputs 1 and 2 (on the same channel). As usual, plug your guitar into input 1. Then connect an instrument cable from input 2 to a second amp’s input 1. The guitar signal is then evenly distributed between the two amps, but only at half-strength. The downside of this method is potential grounding issues, and noise and interference from lights and other nearby electrical components.

Now, let’s look at a few amp combinations that I enjoy—some with effects in one or both signal chains. As usual, I use my classic Fender amps as examples, since this column is, after all, called Silver and Black.

Instead of more pedals, add one more amp.

I’ve seen this combination many times onstage—for example, a Super Reverb and a Vox AC15 or AC30. The cranked Vox provides strong mids through 12″ speakers, and is lush, bright, and distorted. The cleaner and tighter 10″-loaded Super Reverb is scooped and bass-y. With this pairing you get attack and sustain, distortion and bell-clear chiming notes, and you can select either the trebly, in-your-face Vox reverb or the more subtle Fender reverb.

This combination is more Fender-y than the Vox pairing, obviously. The point is to get low-wattage break-up from a mellow sounding Princeton Reverb together with a bigger and fuller sounding Fender amp. The big amp is dialed in at its sweet spot with some—but not too much—warmth, a normally balanced EQ, and some reverb. Then I crank the Princeton volume to 8 or 9, and set the treble at 3 and the reverb at 0. The result is a rich and wide tone. You may use the ABY pedal to play only the big Fender amp on verses, and add the Princeton for more crunch on solos or refrains.

Chorus, reverb, vibrato, or delay effects can sometimes make your tone sound thinner and weaker, and undermine its core character and sustain. You can compensate for this by using two amps in parallel, where the effects are only applied to one amp. This yields a more subtle and controllable effect level. To some, having effects in only one channel improves the spread and 3D experience.

For fun, I want to mention SRV’s famous and monstrous combo that he used for the 1983 Live at the El Mocambo concert in Toronto. His tech César Diaz modified his Vibroverb to be louder, firmer, and chunky, with a monstrous EVM 15L speaker, a diode rectifier, and a Twin Reverb output transformer. Both amps were cranked, and the Super’s 10s provide touch sensitivity and a scooped tone while the Vibroverb punches you in the face. There’s an enormous 3D-spread onstage. Unless you play stadium gigs and have strong, super-controlled hands, I don’t recommend this combo, since it will scare everyone away—bandmates, sound crew, and audience. But done right, it is an overwhelming experience. Now, go experiment.