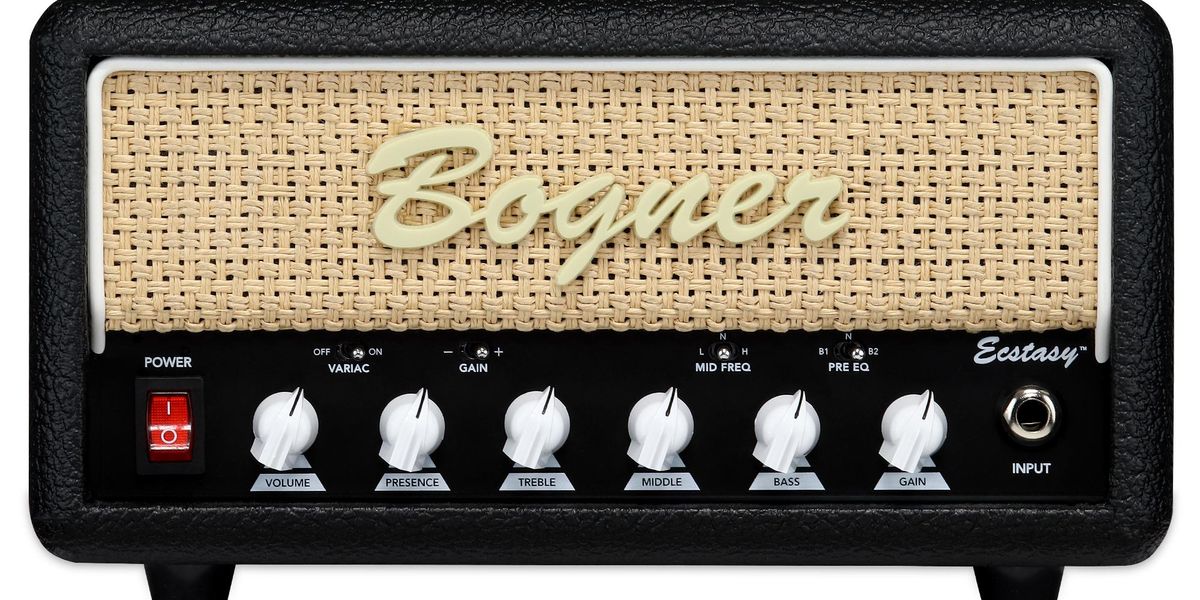 The original Bogner Ecstasy, released in 1992, is iconic in heavy rock circles. Though it was popularized and preferred by rock and metal artists (Steve Vai and Brad Whitford were among famous users), its ability to move from heavy Brit distortion to Fender-like near-clean tones made it appealing beyond hard-edged circles. Even notorious tone scientist Eric Johnson was enamored with its capabilities.

At nearly $4K, a new 100-watt Ecstasy is out of reach for a lot of players. But the new Ecstasy Mini, a 30-watt, class-D, solid-state amp that weighs less than four pounds, does a surprisingly great job of capturing the original Ecstasy’s essence in a tiny, portable package

The Ecstasy Mini comes in a package small enough to be mistaken for a shoebox. Don’t be fooled by the diminutive size, though. It’s a badass little screamer that can rip heads off. It can also play it cool: Even though it’s based on the original Ecstasy’s mighty high-gain red channel, the Mini still moves between screaming hot lead tones and near-clean sounds with relative ease.

The control panel is pretty straightforward. There are six chicken-head knobs for volume, presence, treble, middle, bass, and gain. Above the knobs are four mini toggle switches that help you shape the amp’s tone and feel in more specific ways. There’s a variac mode that approximates the function of a variable voltage transformer—reducing headroom and producing cool takes on Eddie Van Halen’s brown sound. A gain switch lets you choose between a plexi-type sound or a modern, ultra-high gain setting, and a mid-frequency switch lets you choose which midrange band (800 Hz, 1.6 kHz, or 3.2 kHz) is shaped with the mid control. A pre-EQ switch, meanwhile, provides three baseline voices ranging from relatively mellow to bright. There’s also an effects loop on the back of the amp for patching in effects like reverb and delay. The amp’s 24V power supply is universal and the amp can be used anywhere around the world without a step-up transformer.

The Ecstasy Mini’s build quality is excellent. Throughout my test—even with the volume and gain cranked—the amp was impressively quiet. With guitar volume at zero, you probably wouldn’t even know that a raging amp is sitting idle, ready to pounce.

I started my tests in low-gain mode with the gain knob at noon. Even at these less aggressive settings, I could feel the room rattle when I hit an A chord. There’s a lot of available volume and single notes really ring with sustain at these settings—particularly when the variac setting is on. The amp is a surprisingly great match for blues-rock and pop-rock at these settings. (I was even compelled to have a go at Steve Lukather’s solo and tone from Toto’s “Rosanna.” It sounded pretty spot-on.)

Even at less aggressive settings, I could feel the room rattle when I hit an A chord.

High-gain settings transform the amp from simply muscular to monstrous, reminding me why the original Ecstasy is so coveted. I tuned my Schecter T-7 7-string’s low string down to A and played power chord riffs with the gain around 1 o’clock, the variac off, and tone knobs all at noon. Here, the Ecstasy Mini was razor-sharp and never flabby. Picking response feels fast, and even low open 7th string tones were crisp and tight.

Switching to the variac setting brought a noticeable drop in volume, a bit more warmth, and spongier, more compressed response. In general, I preferred the variac setting for solos. Obviously, it’s less well suited for ultra-precise single-note runs and detuned rhythms, but a high-mid boost from the pre-EQ’s B2 switch helps solos cut through more effectively without sacrificing too much of the forgiving sag you get via the variac mode.

Time to Clean Up

For a single-channel, high-gain amp, the Ecstasy Mini does a respectable job of generating clean sounds at gigging volume. With the gain knob around 7 o’clock and the mini toggle for gain in low mode, single-coils readily produce cleaner tones at lower guitar volumes. Humbuckers introduce more grit, but you can still hear lots of individual note clarity and effectively move from clean-ish to dirty sounds via picking and volume control dynamics. The amp’s dynamic response is impressive at the highest gain settings, too. And though you won’t get pure clean tones here, active adjustments of guitar volume make the amp capable of cool, dramatic shifts in mood, tone, and intensity.

Bogner’s Ecstasy Mini is versatile for an amp so clearly designed for maximum power. It will sound huge and hang with a loud band when miked through a PA. But you can also stow it in a gig bag as a backup, use it in the studio, or at home if you’re tight on space. It may not rival an all-valve 100W Ecstasy for body, richness, and sheer power. But unless you’re playing Madison Square Garden, there’s no reason it can’t cover most of your gigging needs. The Ecstasy Mini is a killer high-gain amp with a street price that’s not much more than a pedal. And that combination of power and value makes it pretty hard to beat.