The Basics of Britpop 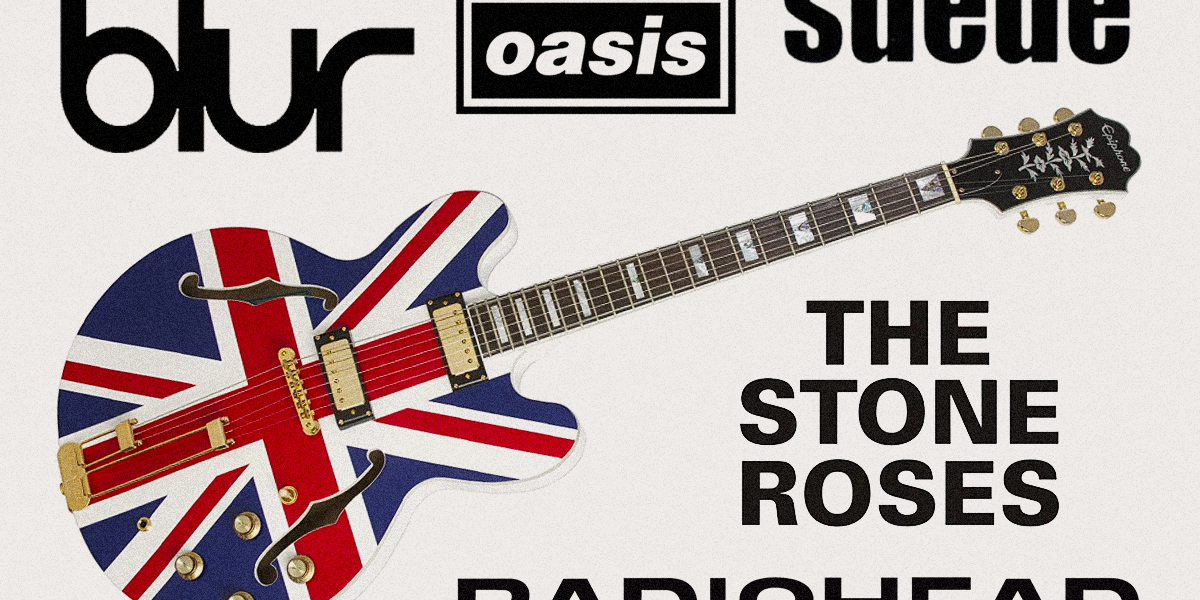 When considering the many bands that fall under the term “Britpop”–Oasis, Blur, Suede, Elastica, Radiohead’s early work, and more–it’s clear that the genre is more an attitude than a specific musical style. Still, there are a few guitar techniques and approaches that abound in the genre, many of which have been “borrowed” (the British music press’ friendly way of saying “appropriated”) from earlier British bands of the 1960s, ’70s, and ’80s.

It’s difficult to say when Britpop started, the term was bandied about in the British press in the early 1990s to label such bands as Suede and Blur. You can argue the Stone Roses created the template in 1989 with their self-titled debut album. But I think you can hear the sound of Britpop much earlier, 1970 in fact, on George Harrison’s All Things Must Pass. Harrison’s bright rhythm guitar, wah-wah lead, and drum groove on “Wah-Wah” all fit the template for 1990s Britpop. Ex. 1 emulates these three characteristics of that proto-Britpop recording.

Ex. 2 jumps ahead two decades with a specimen Britpop fans will be more familiar with as it pays homage to both the Stone Roses’ “Fools Gold” and Suede’s “The Drowners.” Once again, the wah-wah pedal is employed. In the first section, the wah-wah is engaged primarily on the muted strums to generate a funky rhythmic pattern. In the second section it’s used for texture. The strum is basic, playing four, quarter-note down strums, but the wah-wah is rocked back and forth creating the illusion of eighth- and 16th-notes. This could take more practice than you might imagine, but you should think like a drummer. Note the Bb major chord in the first section and the B major chord in the second section. These are non-diatonic chords (meaning not in the key), giving the progression a slightly more sophisticated, or at least unexpected, sound.

Yet another two-guitar-wah-wah groove, inspired by Pulp’s “Lipgloss” is shown in Ex. 3. Guitar one features cowboy chords strummed with a busy rhythmic pattern–a hallmark of Britpop–while guitar two plays a motif (a short melodic pattern), with the wah-wah on, though not moving much. It’s more for tone and texture.

As seen in two of the previous examples, dual guitars are a big part of the Britpop sound, no doubt inspired by the likes of the Beatles, the Kinks, and the Rolling Stones. Ex. 4, based on Blur’s “Coffee and TV,” features guitar one playing barre chords and distinctive mutes thrown in for accents, while guitar two plays a double-stop riff that creates suspensions between the 3 and 4 of the chord. The G chord is a rather surprising choice in the key of B.

Moving on from 1960s influences, Ex. 5, based on “Delicious” by Sleeper, has that 1980s “jangle” sound (for more on jangle guitar see my June 2021 lesson “What Exactly Is ‘Jangly’ Guitar?”) heard in songs by such bands as the Smiths and the Cure. In this example, guitar one, a la “Delicious,” is dirtier, and guitar two has that glorious 1980s clean tone.

Britpop is not without its solos, but once again we can find the influences worn prominently on the sleeves of the guitarists. Oasis’ “Don’t Look Back in Anger,” which, besides the intro piano that sounds as if it came straight out of John Lennon’s “Imagine” sessions, has a guitar solo reminiscent of George Harrison’s lead on the Beatles’ “Let It Be.” Ex. 6 provides the feel, atmosphere, and quintessential licks of “Don’t Look Back in Anger,” which also features a IV to IVm (in this case F to Fm) chord movement, another classic Beatles move. It is notable that Oasis founder, Noel Gallagher said of the song, “It reminds me of a cross between ‘All the Young Dudes’ [Mott the Hoople] and something the Beatles might have done.”

Though not as overt, there is a blues influence to be heard in Britpop too, however, it’s filtered through the prism of ’70s glam rock. Once again Oasis–with help from T. Rex–is our point of reference. Ex. 7 demonstrates the influence “Bang a Gong (Get It On)” had on Oasis’ “Cigarettes & Alcohol.” Pay attention to the syncopations found in guitar one, as you must play through four measures before the progression repeats exactly. Guitar two has syncopations of its own although you only have to play one chord shape.

As we heard in Ex. 5, arpeggios, play a large role in Britpop. Blur’s “She’s So High” and Suede’s “Lazy” are worthy examples. I don’t think Britpop arpeggios get any better than the Stone Roses’ “Waterfall”, which Ex. 8 is based on. If you’re searching for forerunners to this sound, look no further than the Beatles “Ticket To Ride,” “She Said, She Said,” or “Run For Your Life.”

As with most overview lessons, this one has barely scratched the surface of the Britpop sound or the post-Britpop bands that followed. More examples of references can be heard in the Verve (“Bittersweet Symphony” via the Rolling Stones), Radiohead (“Creep” via the Hollies) and Elastica, who appropriated some riffs by the band Wire. All of those bands busted over these similarities, but don’t let these “borrowed” ideas worry you. To paraphrase the Who’s Pete Townshend, “All songwriters are magpies and thieves.” Just make sure you steal from the best!