Zaragoza, 12nd December 2021. Asis Percales, Berni Puig, Dani Hache, Ecosaurio, Letsornot, Maite Rosende, Mina Hamada, Nelio, Olga de Dios and Twee Muizen are the artists who participated in the 16th edition of the Asalto Festival and who have left a series of works that, far of the large format, they have been integrated into the daily tours of the neighbors.

These artists have treated with great sensitivity the history of the neighborhood of the Arrabal de Zaragoza and the relationship with its people, as well as the structure and dimensions of the environment and its historical structure.

In addition, in this edition the festival has recovered part of its rhythm and reason to be with the participation of citizens, educational centers and associations in workshops or in the creation of some of the works.

With this edition, it is sixteen years of Asalto, a pioneering festival that has toured the city with the participation of more than 300 artists. 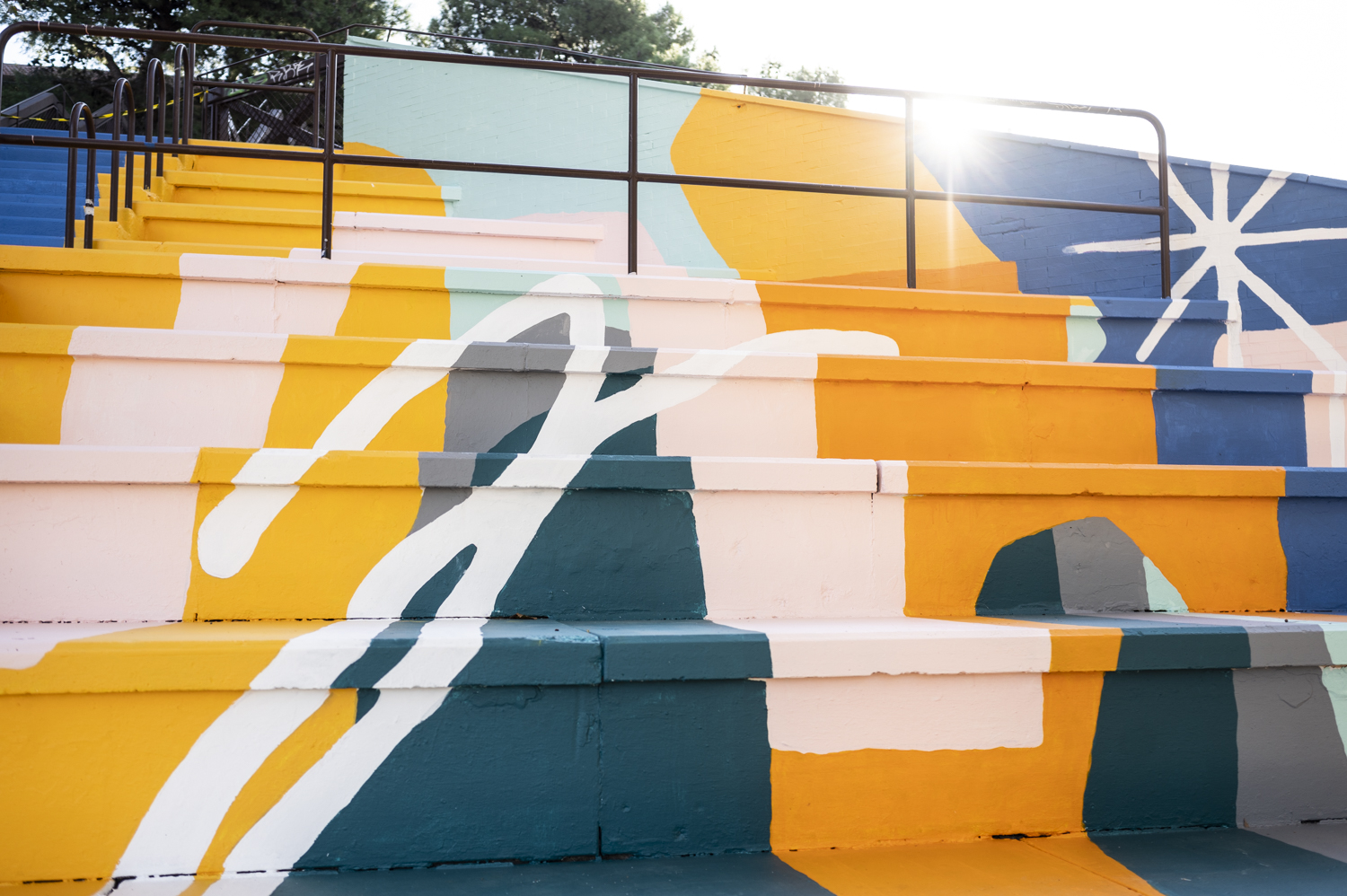 LETSORNOT’s work is a vindication of fountains as a meeting and observation point, where everything happens. The work is conceived to be observed from the circular perimeter of the Fountain, where all the pieces fit together.

“If you want to eat cookies, sow wheat” is the ASIS PERCALES mural made with the collaboration of GECO GEC0. This is a sincere tribute to the industrial past of the neighborhoods of Arrabal and Jesús in Zaragoza, to the working-class origin of these neighborhoods on the riverbank. This is a work to get lost in all the details, winks and intersections between the history of the city and the iconography of Asis itself. 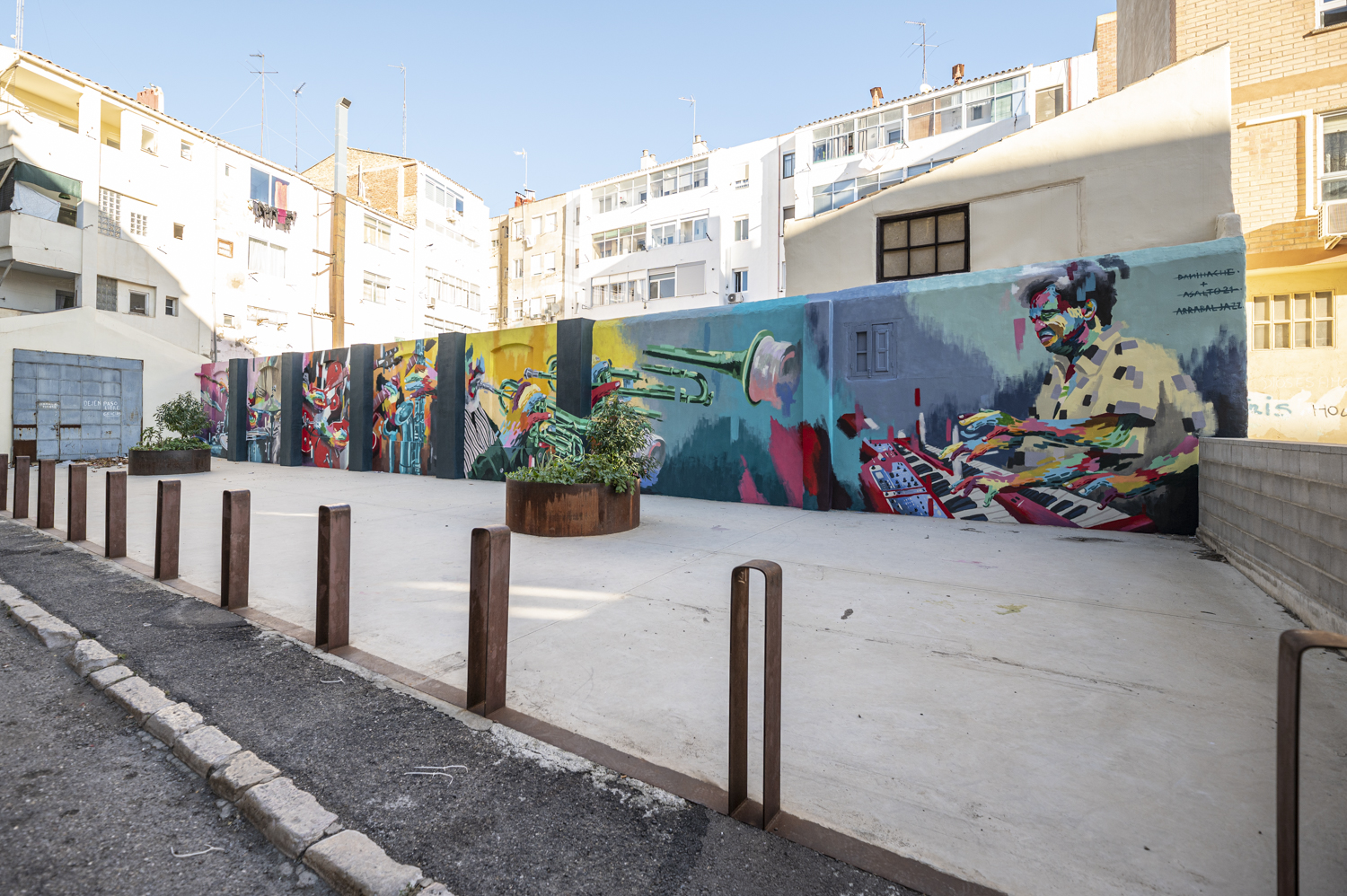 DANIHACHE pays tribute to jazz, Bob Destiny, the ‘Jazz al Margen’ festival and the musicians and groups related to the movement and origins of Jazz music in the neighborhood, such as the Harlem Blues Brass Band. 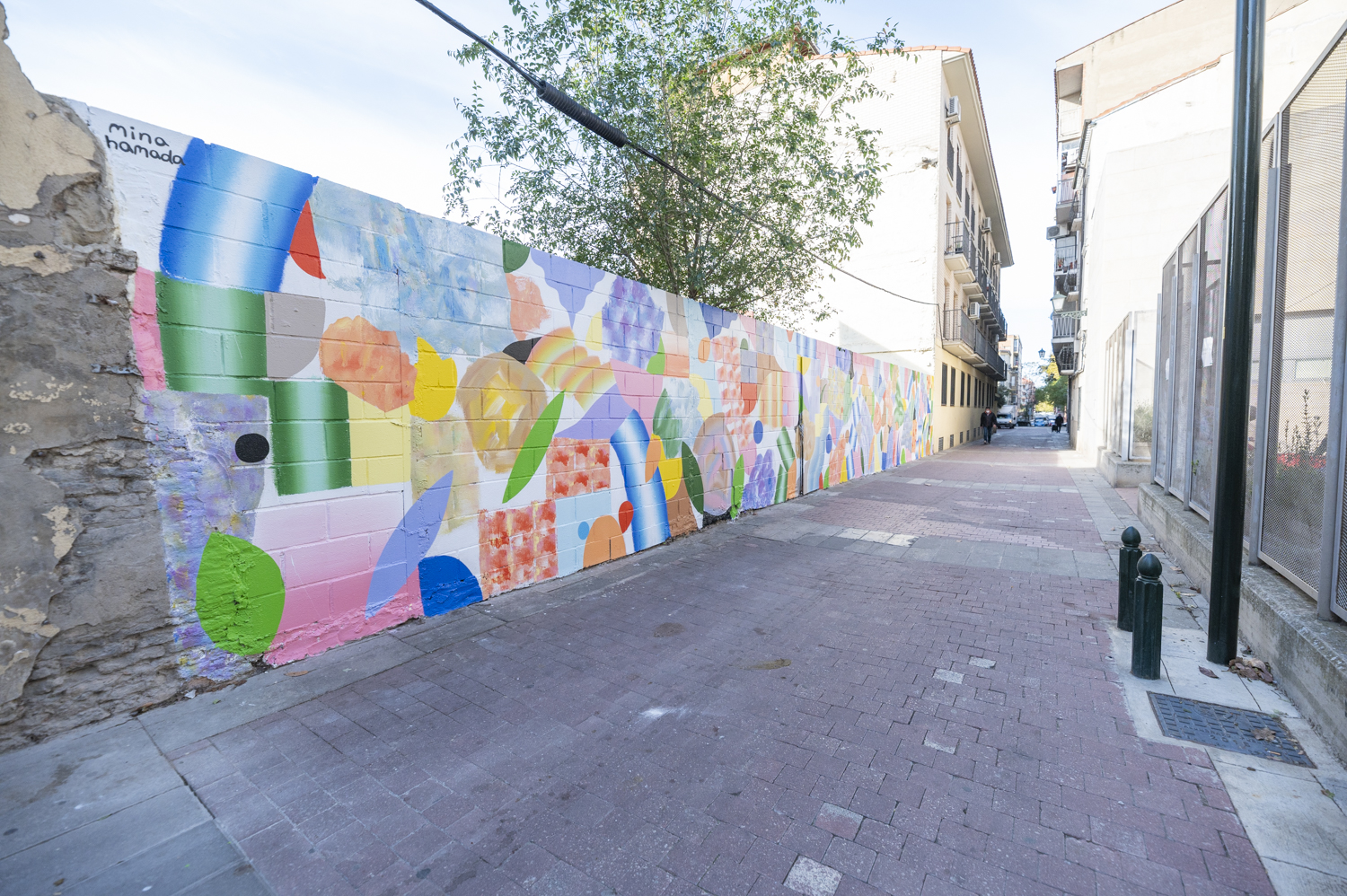 MINA HAMADA’s work is a poetic intervention in a wall of smaller dimensions than usual. With abstract and organic shapes and a bright color palette it has lit up a narrow street in the neighborhood.

The illustrator MAITE ROSENDE, with her flat shapes, has created a story of persecution and friendship through the most significant episodes and places in the neighborhood. 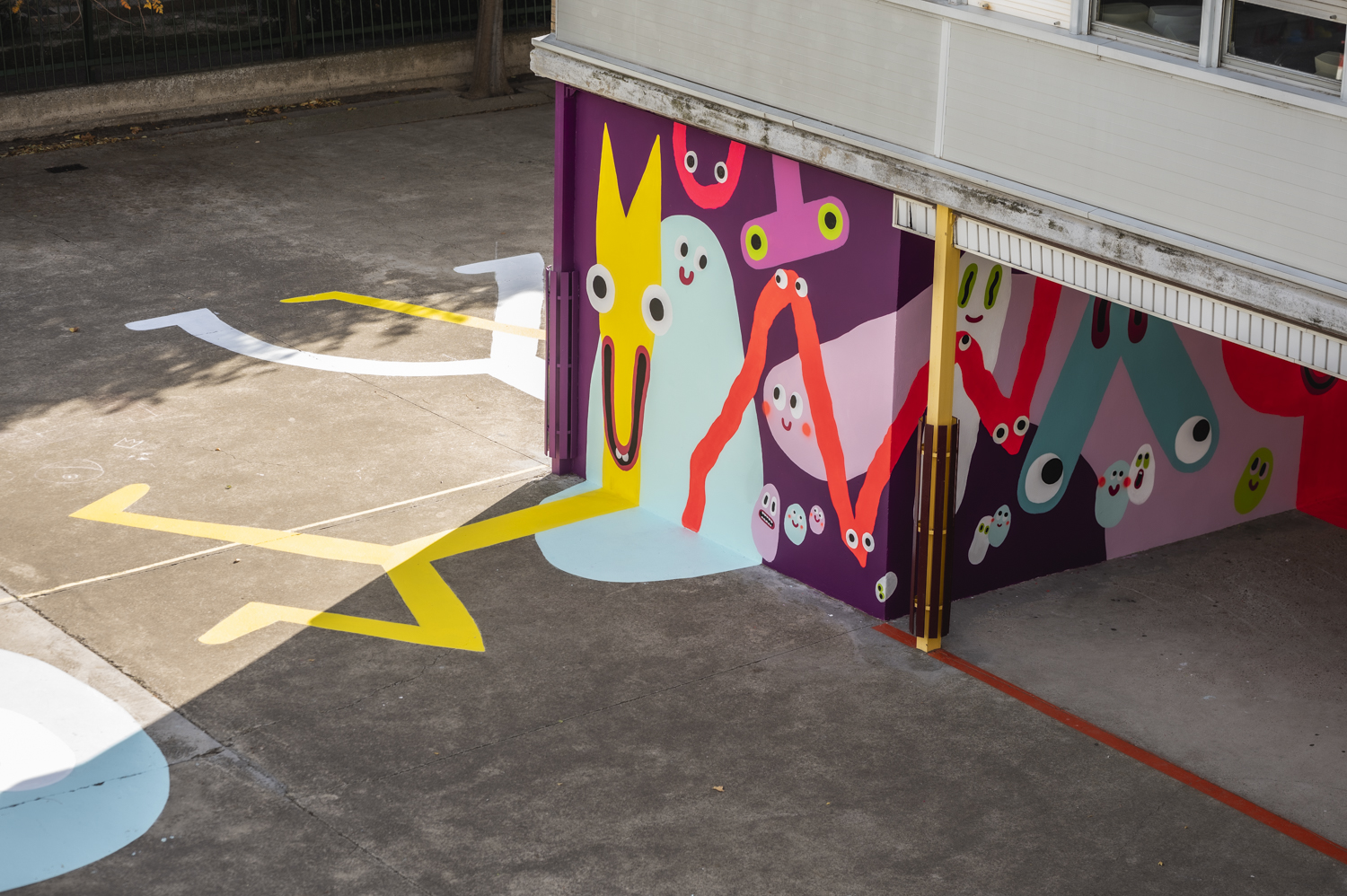 The intervention of OLGA DE DIOS in the playground of a school, with its characters and fluorescent colors, has created paths and new places to play for the little ones.

The Puerto Rican EKOSAURIO, author of the tallest mural in this edition, is creating a large garden with magnolias, olives and plants from his land and the surroundings of the Huerva River in a building. The artist has also worked with the little ones in the neighborhood, who are very involved in environmental projects. 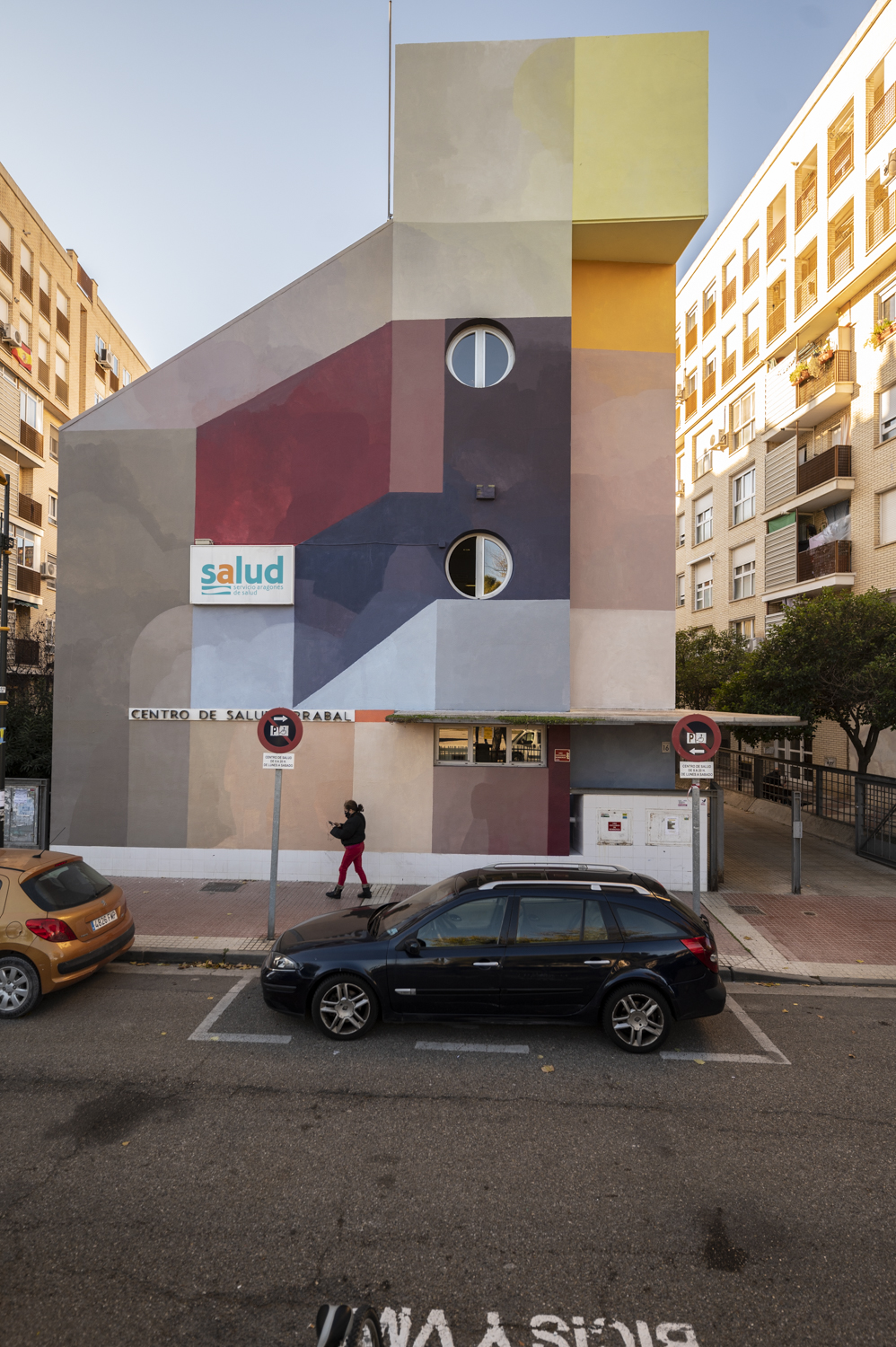 NELIO is the French artist who has painted the facade of the neighborhood health center. With colors full of subtle nuances that change with the passing of the day, it has given new life to a facade of straight and angular lines. In addition, he has intervened in surrounding streets with small mural works in which he has expressed his new artistic concerns.

TWEE MUIZEN evoke the mountain as a refuge. The artists Cris and Denís have painted a series of very personal small murals in which they tell us about the refuge they want to be in and that it is in the mountains or in themselves, a source of inspiration for their work.

The Asalto Festival has the support of the Zaragoza City Council and the collaboration of Tranvías de Zaragoza, Ambar, Montana Colors, Japan Foundation and the Caja Inmaculada Foundation.

Check out below for more photos from Asalto Festival. 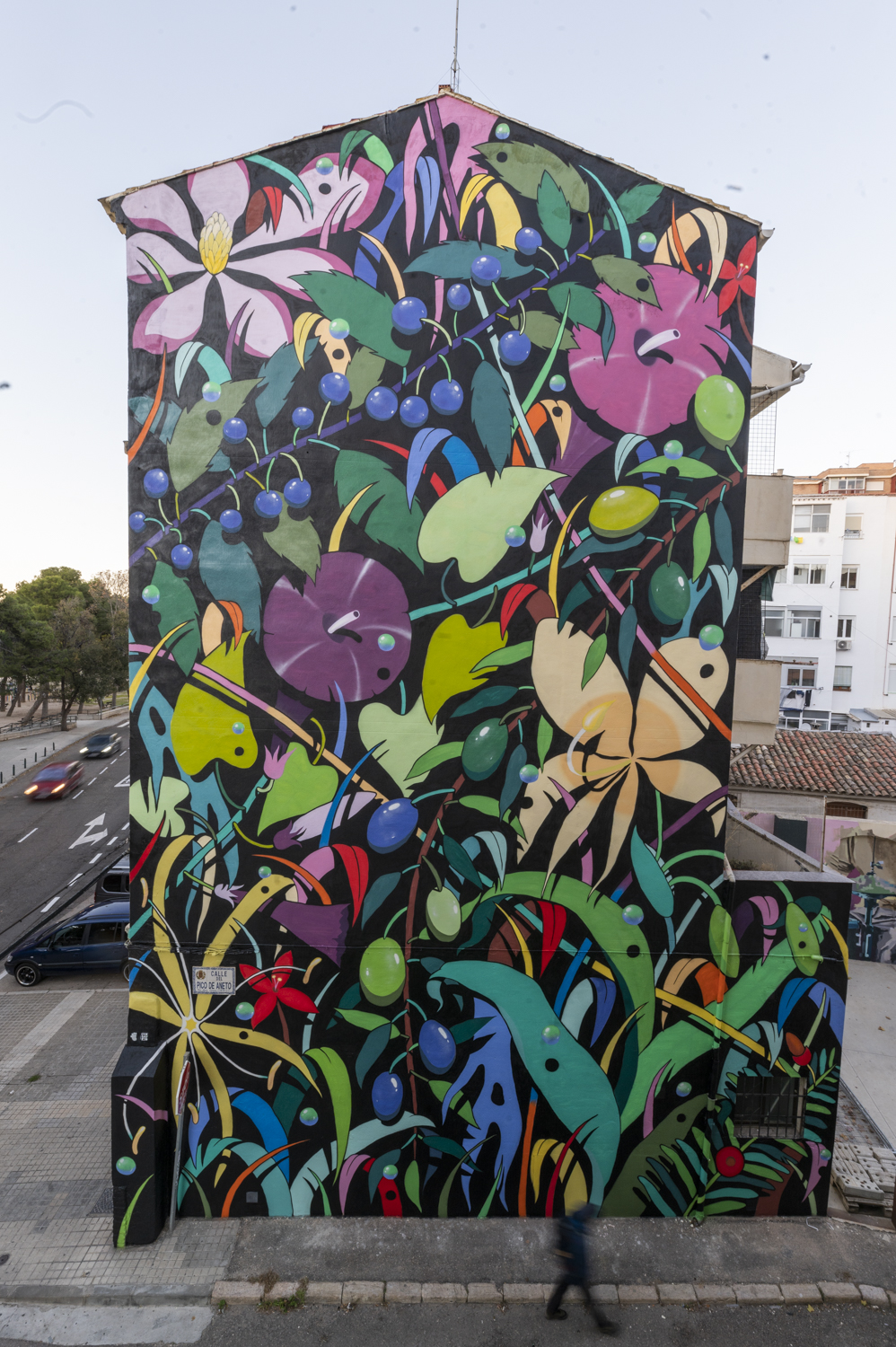 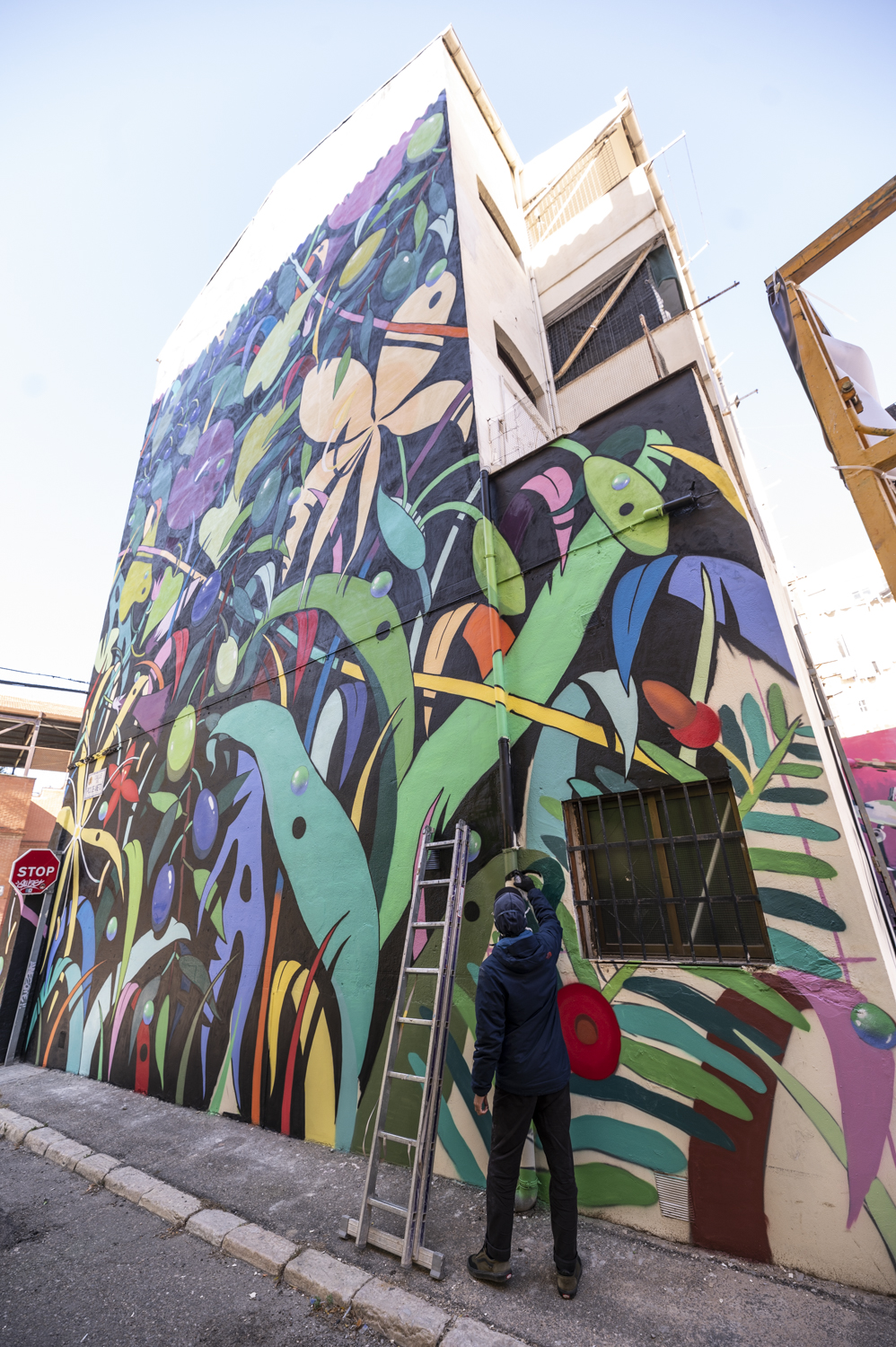 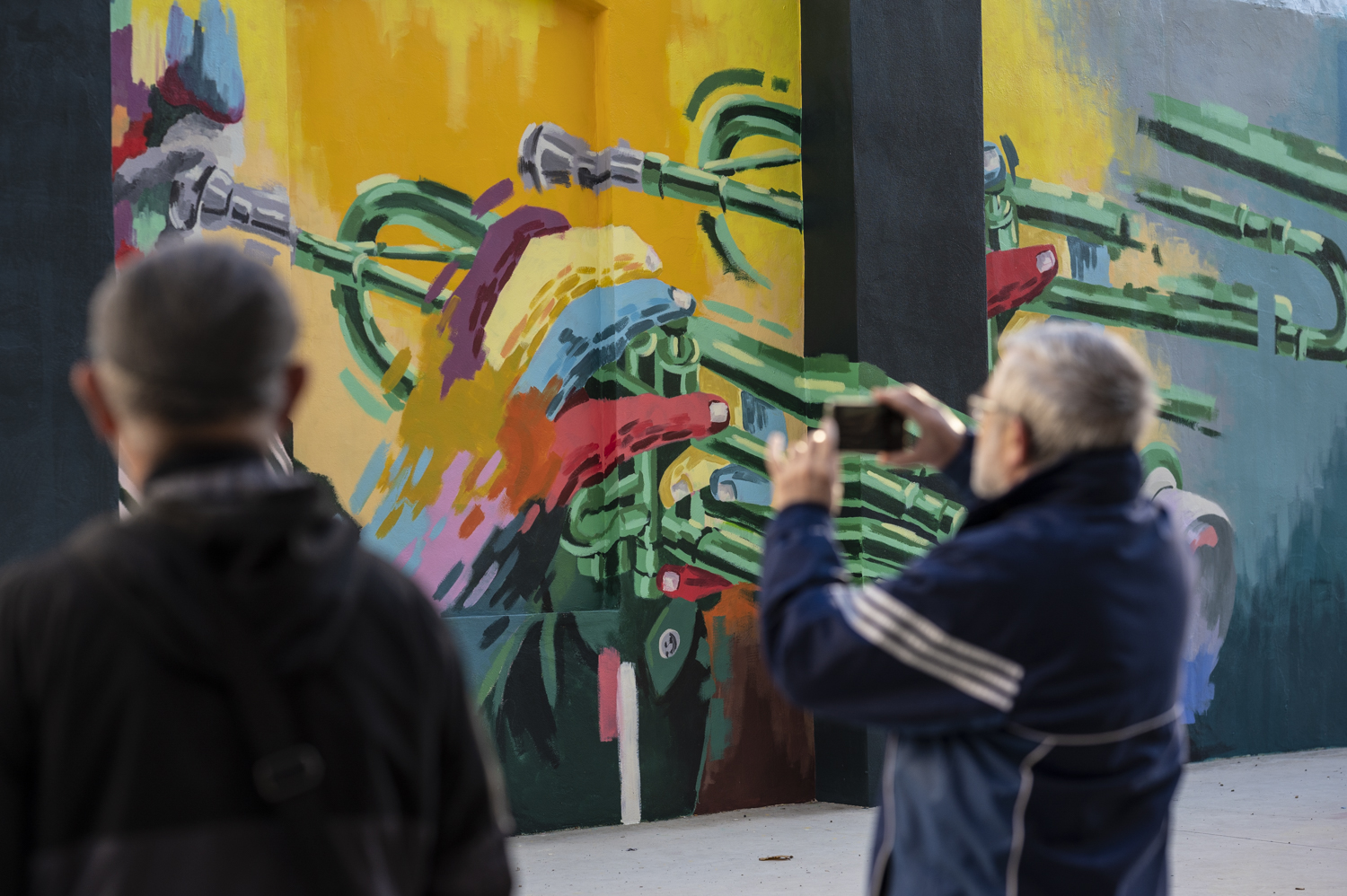 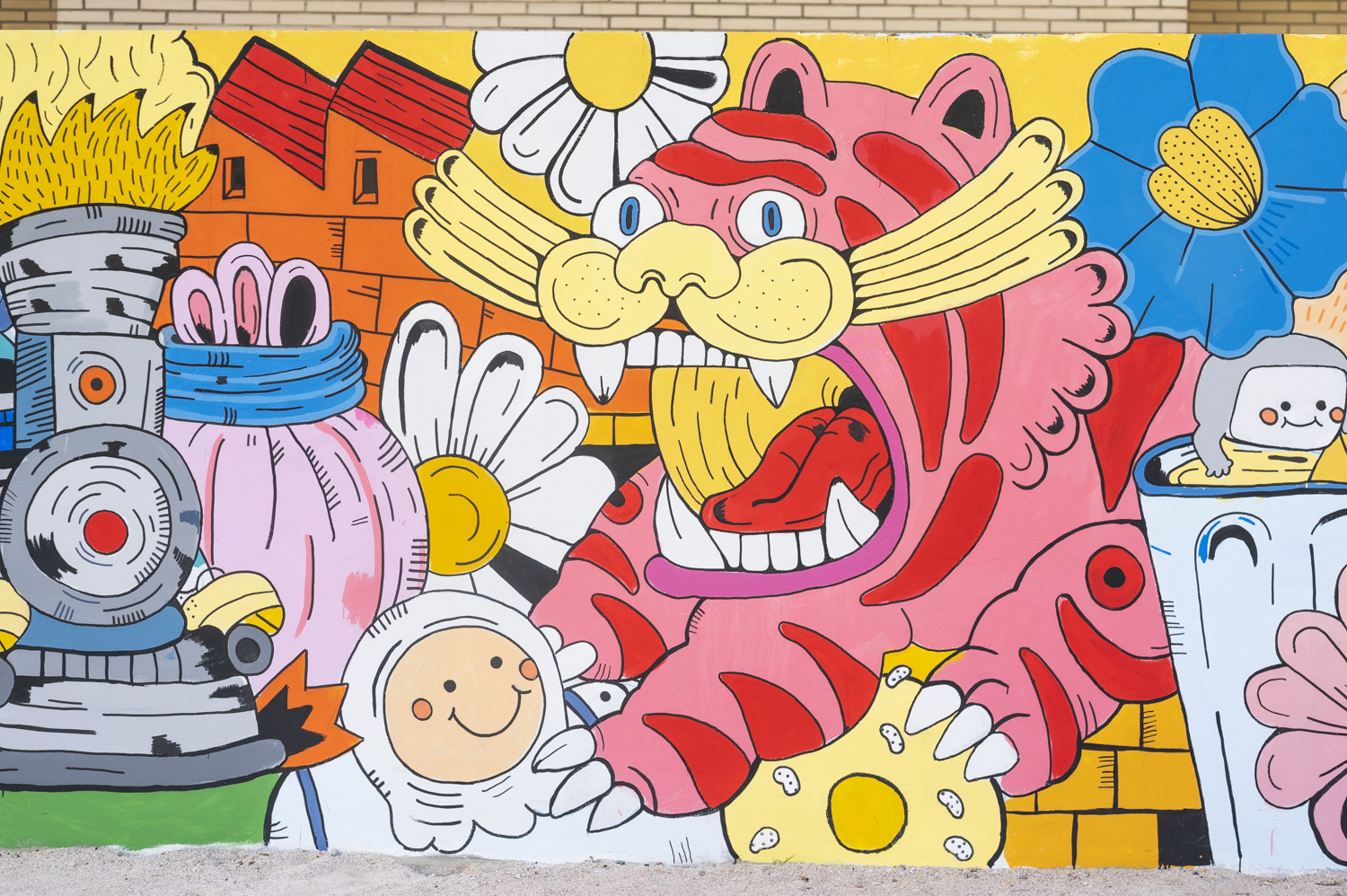 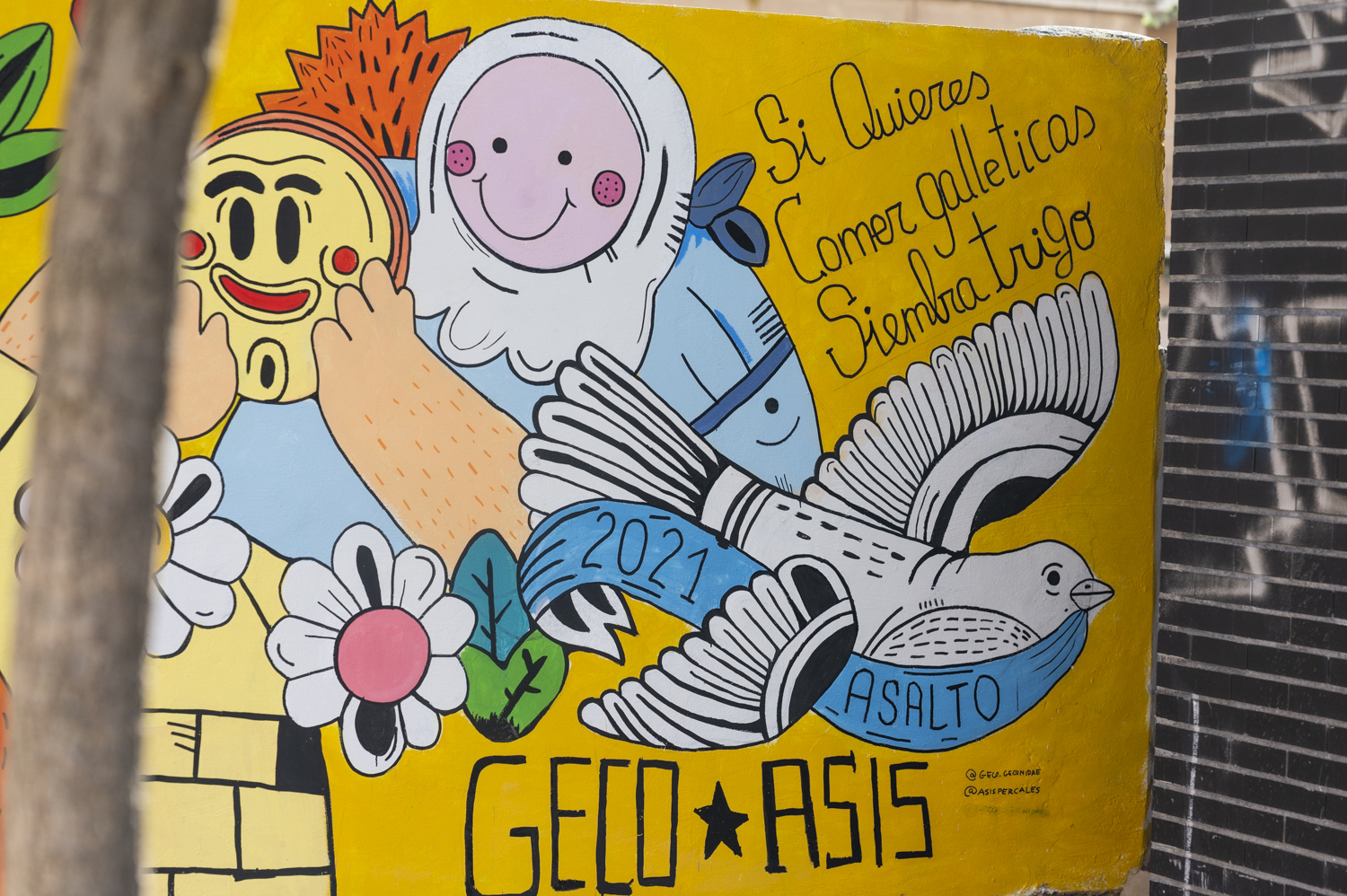 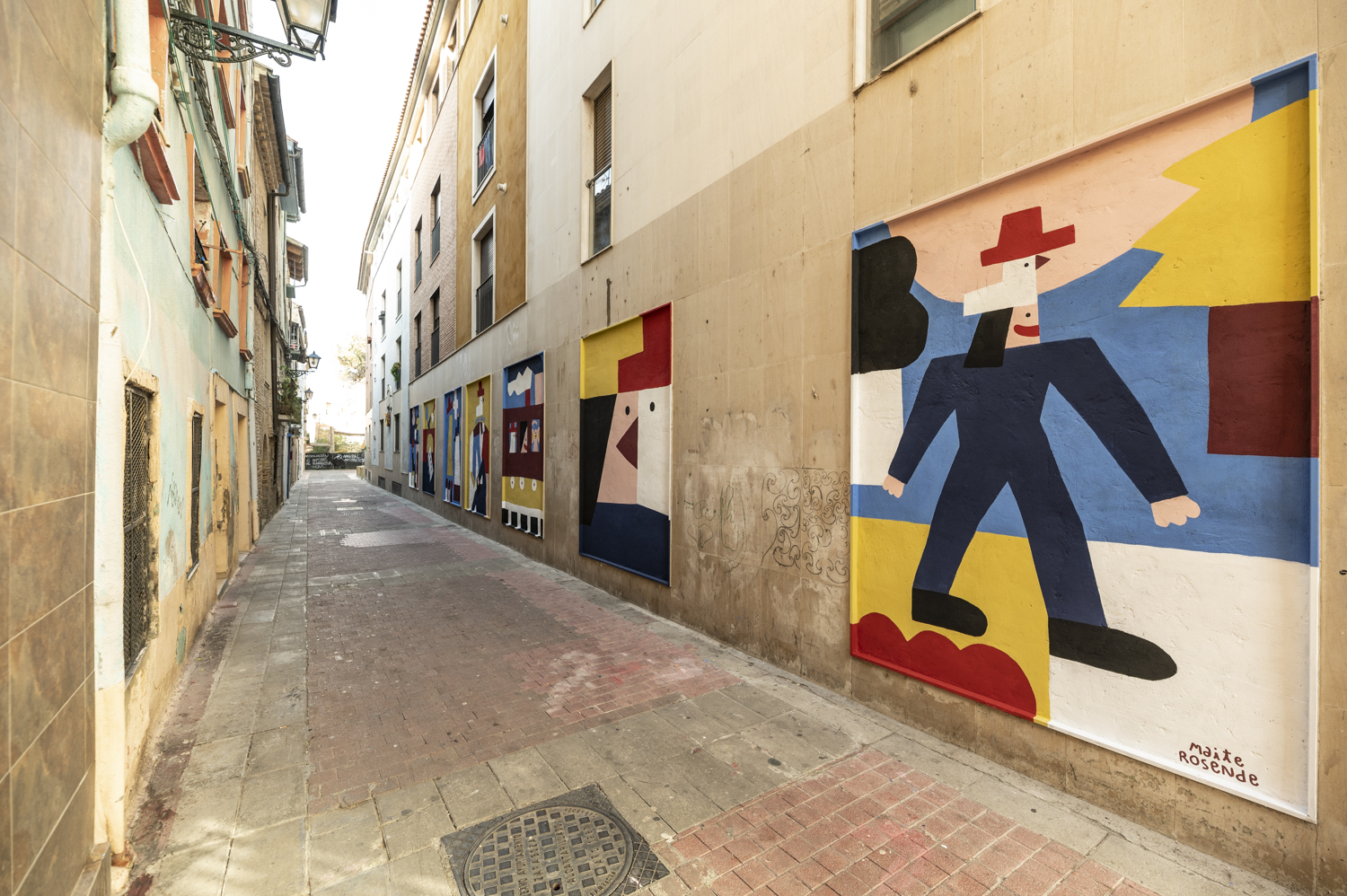 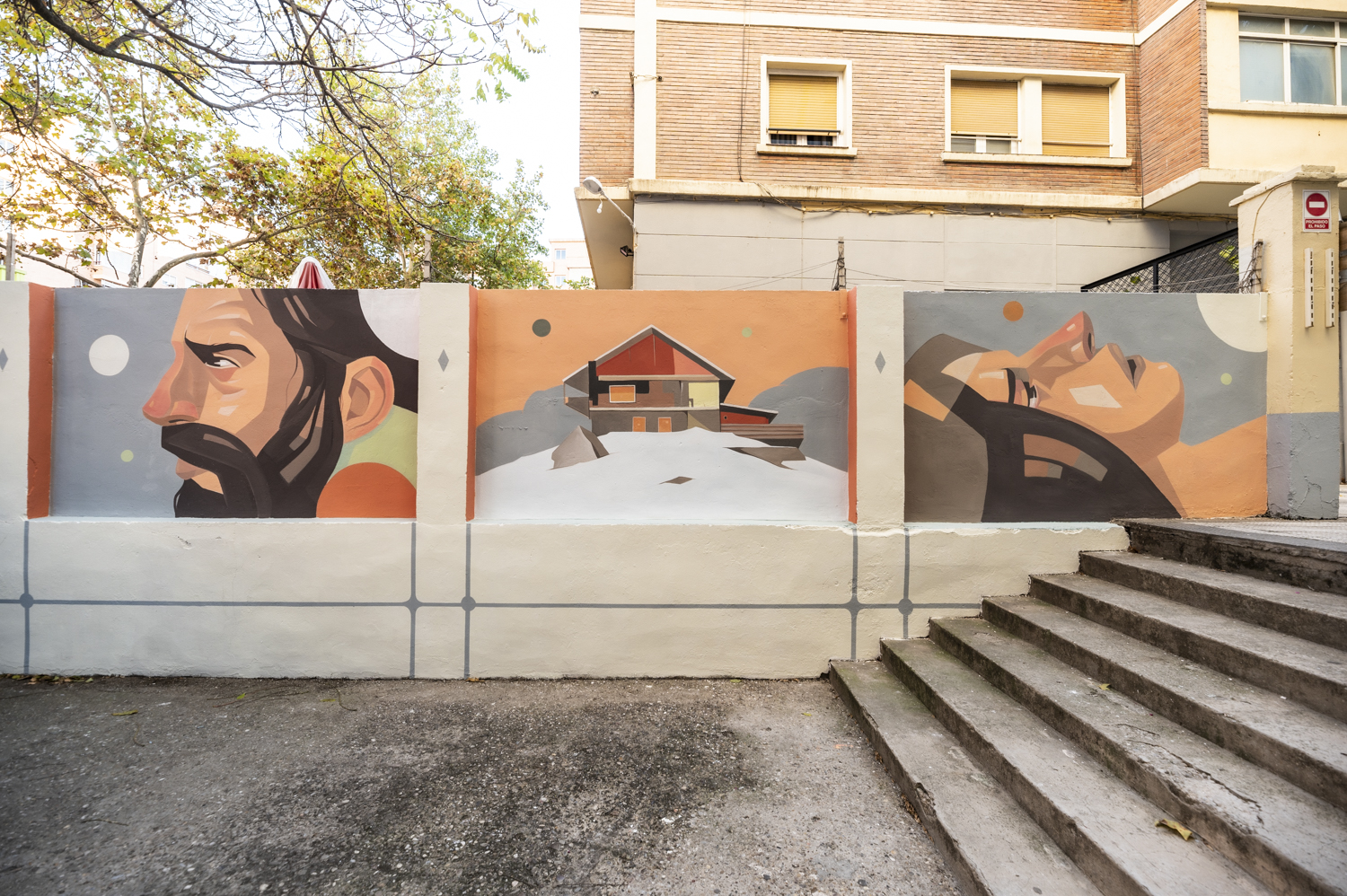 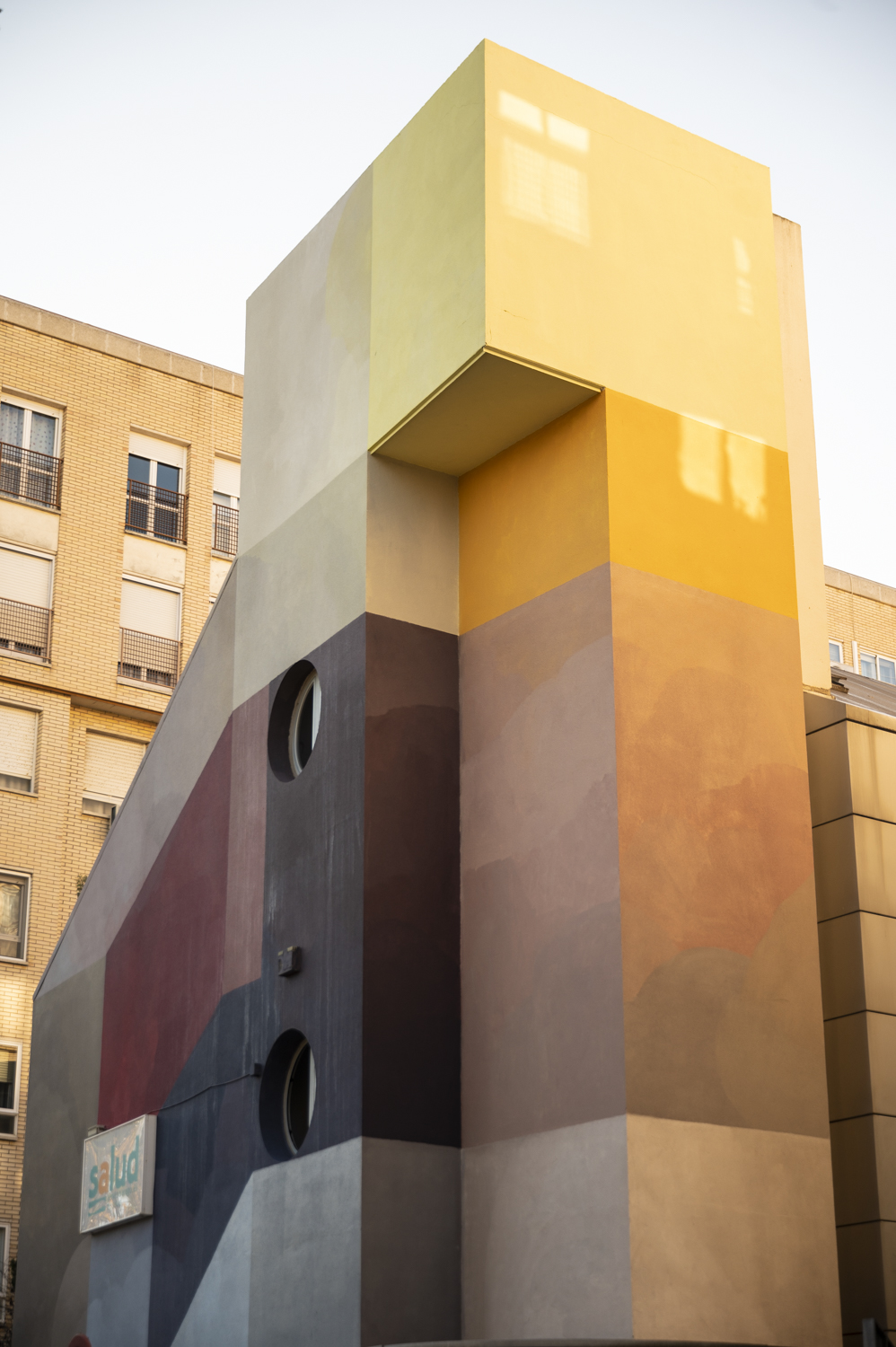 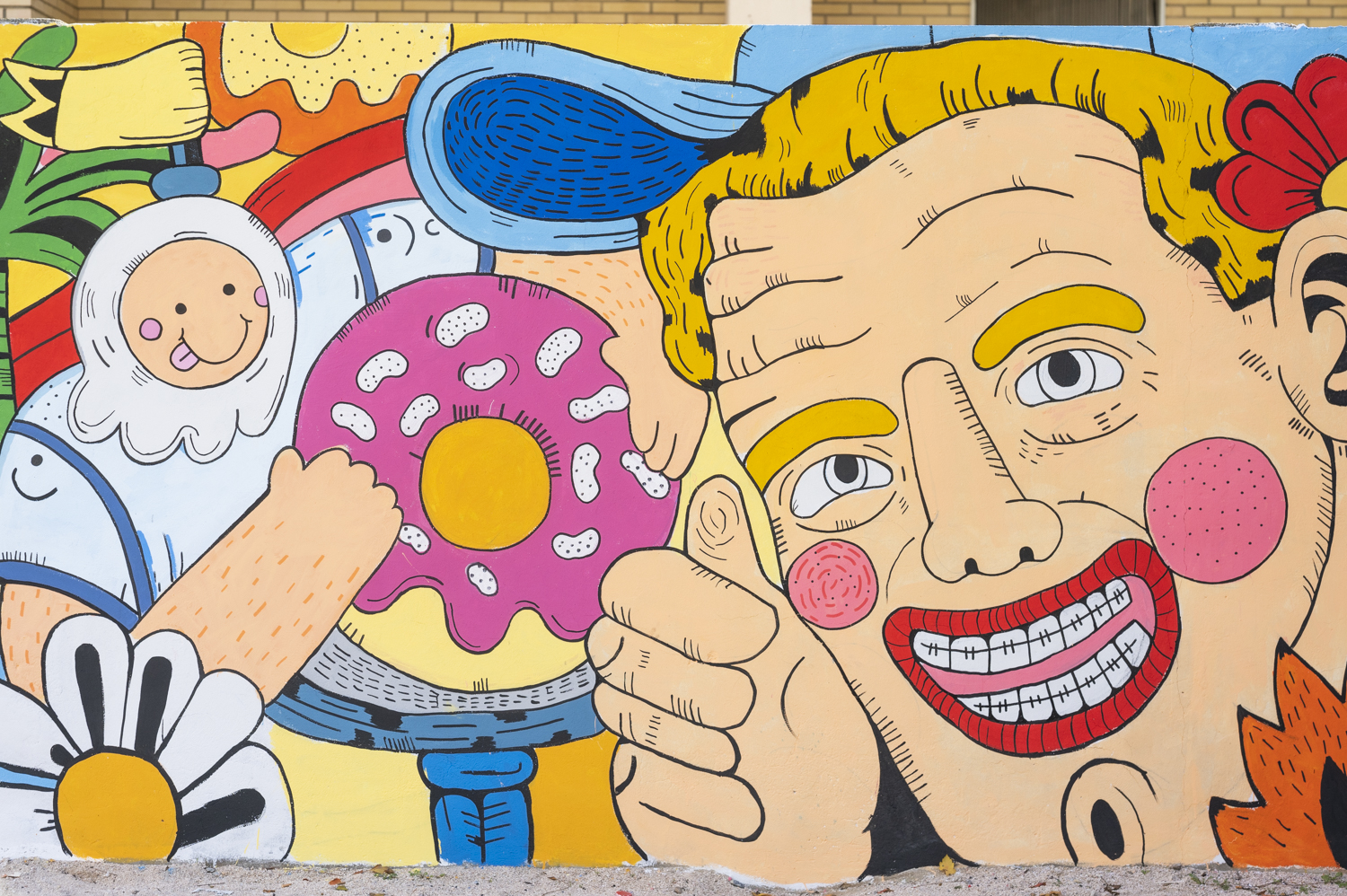