“INSIGHT” by AKUT in Heidelberg, Germany

The INSIGHT project by AKUT – A collaboration painting, installation & exhibition accompanied by a unique portrait photo series of more than 70 individual minds of the urban contemporary and street art scene premiered on the 11th of December. 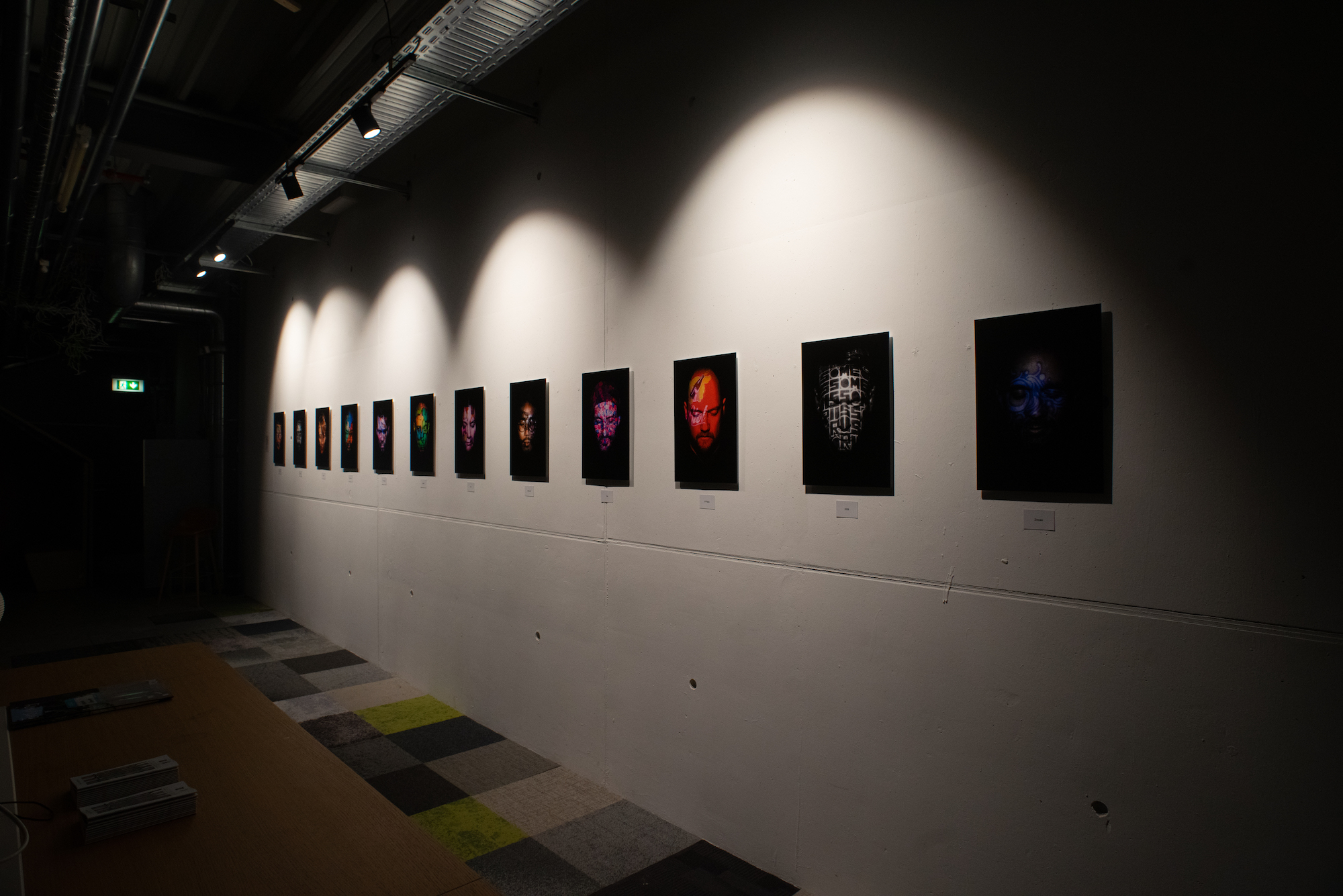 AKUT’s photographs of renowned street and urban artists from all over the globe will be exhibited for the first time from December 11th 2021 until February 25th 2022. The show is curated by Metropolink, well-known for their urban art festival and will take place in the old commissary at Patrick-Henry-Village in Heidelberg. Besides the ongoing photo series, that is taken for over almost one decade and consists of 80 portraits so far, AKUT will present peerless collaboration artworks. 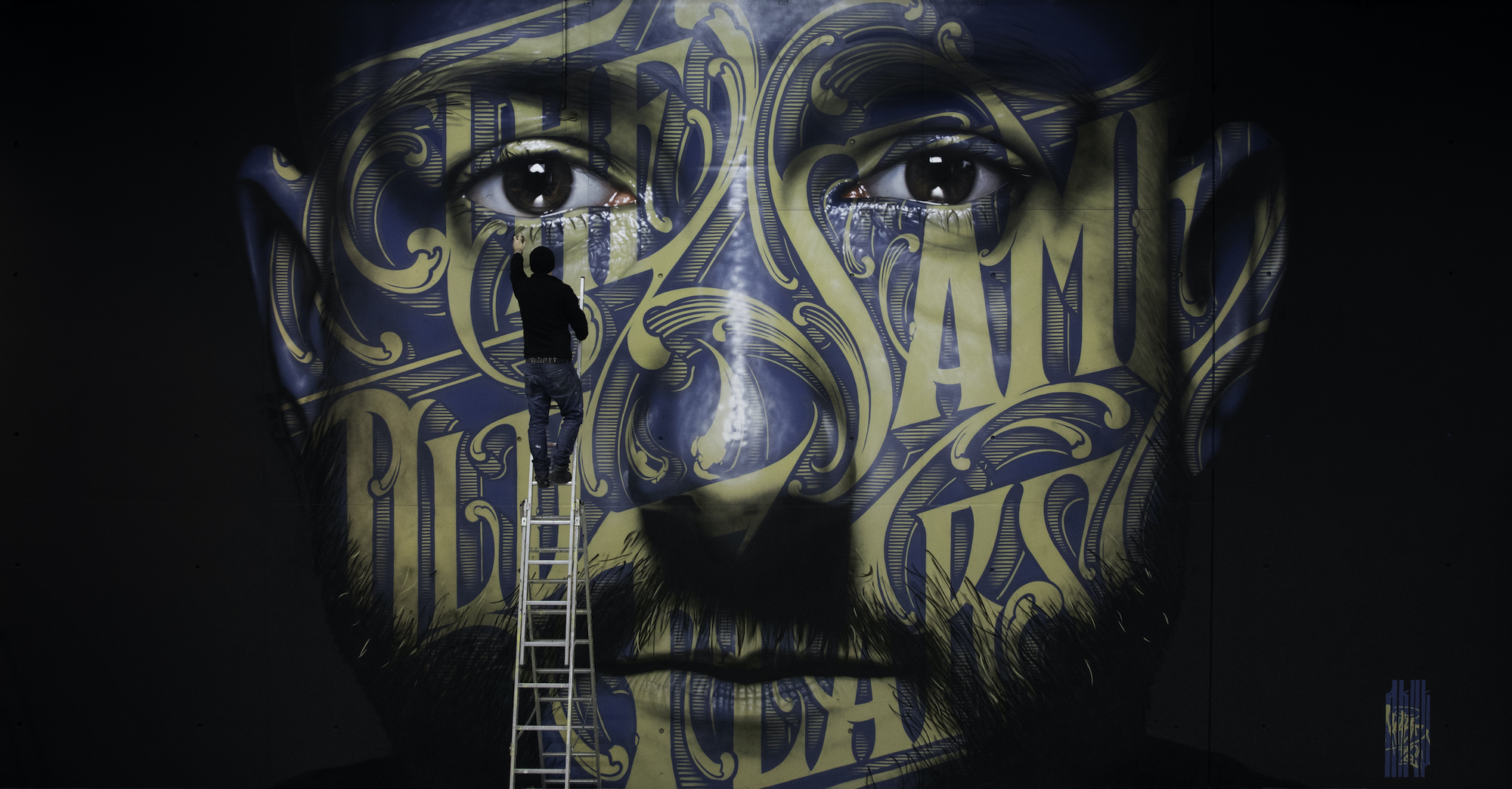 To follow the initial idea of merging the actual work of an artist and their respective portrait, AKUT invited four of his colleagues and friends to join. The German calligraffiti god STOEHEAD, who’s distinct and de-constructed styles constantly evolves for more than three decades already and the Swiss master of handmade lettering KKADE, who mixes graphic traditions like crests, art deco ornamentation with West Coast tattoo and tagging culture dared to participate in this experimental new level of INSIGHT. Furthermore, one of worlds top street artists MAD C, known for her dynamic murals in colourful transparent layered calligraphy compositions as well as German painter Julia Benz, who owns a distinctive style of self-confident colour combinations with abstract forms joined their outstanding forces with AKUTs finest photorealism.

To complement the show and underline their graffiti and street art background AKUT just finished the first mural collaboration with KKADE in the giant hall of the commissary in Heidelberg, looking very much forward to create more of this larger than life portraits in 2022. 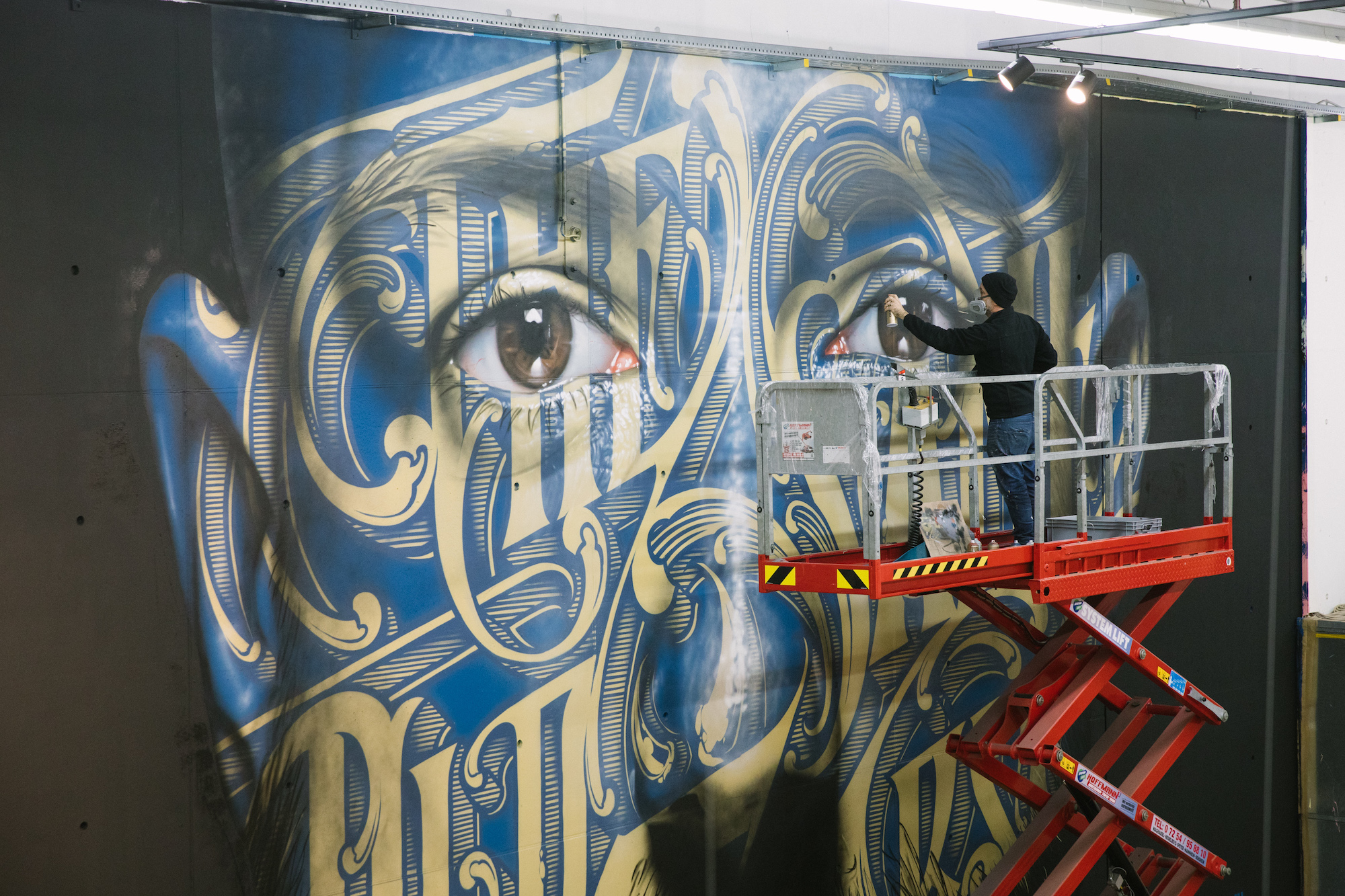 The very first photo portraits were taken analogue on a medium format film in 2011. A year later AKUT switched to digital photography, which was much more practicable. The photographs started as a funny side activity, but in addition with the conversations AKUT had about the question “HOW DID YOU BECAME UNIQUE AS AN ARTIST?” a kind of recipe collection for young artists has arisen. On December 11th the audience had the very first chance to immerse into this unique world of INSIGHT in the presence of the artist(s). 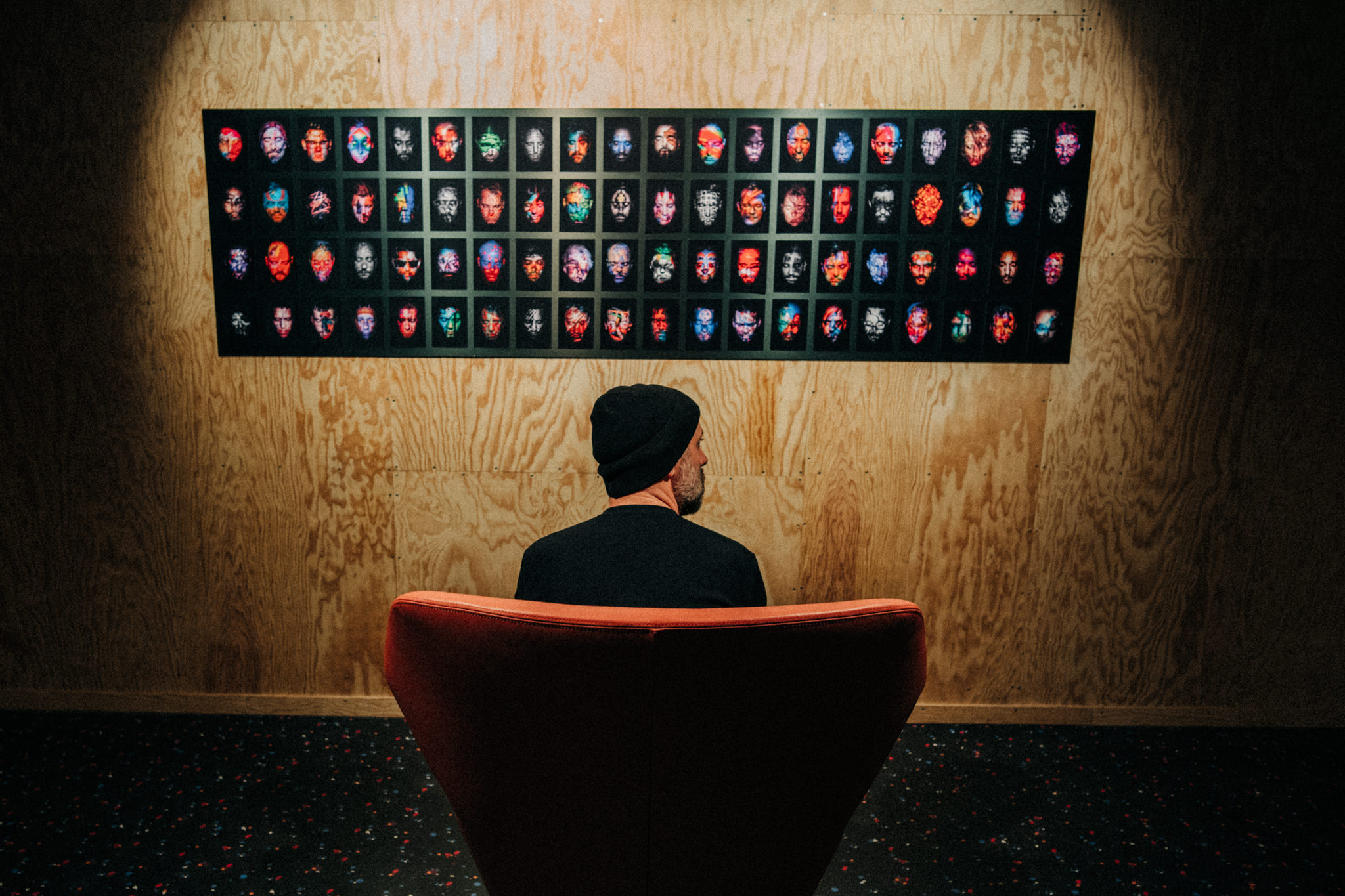 Background story about the photo series:

– While traveling the world, as one half of acclaimed street art duo HERAKUT, AKUT formerly known as Falk Lehmann met numerous artists, big names as well as locals. He knows their styles, heard their stories, has seen them working and was always curious to learn about their creative processes. Back in 2011 he started a photo series portraying his colleagues, role models and friends in a way that he projects their artworks onto their faces. He considers the human face as corresponding to a unique canvas on which the traces of the individuals life are drawn. These characteristics make it distinctive and reflect the lifestyle of a person in a certain way. AKUT adds a level of passion, which has an important place in the artist’s existence, to the natural facial texture. The projection of an artwork onto the face creates a mask-like, archaic expression. The closed eyes symbolize a turning towards the inner self of the artist. Additionally, AKUT understands the merge of the artwork and the respective artist’s face as an act of visualizing the artist personality AND the private person comparable to the leaking of a superhero identity. It’s mainly the private person’s alter ego, the alias, who is (well) known to the audience. Some artists do not even show their faces, ever. Intentionally their artistic name and output is everything they reveal to the world, which might give them this status of uniqueness in the first place. Anyhow, these artists are private individuals as well and have their very own opinions on their supposedly unique status, which can be explored in the upcoming exhibition. – 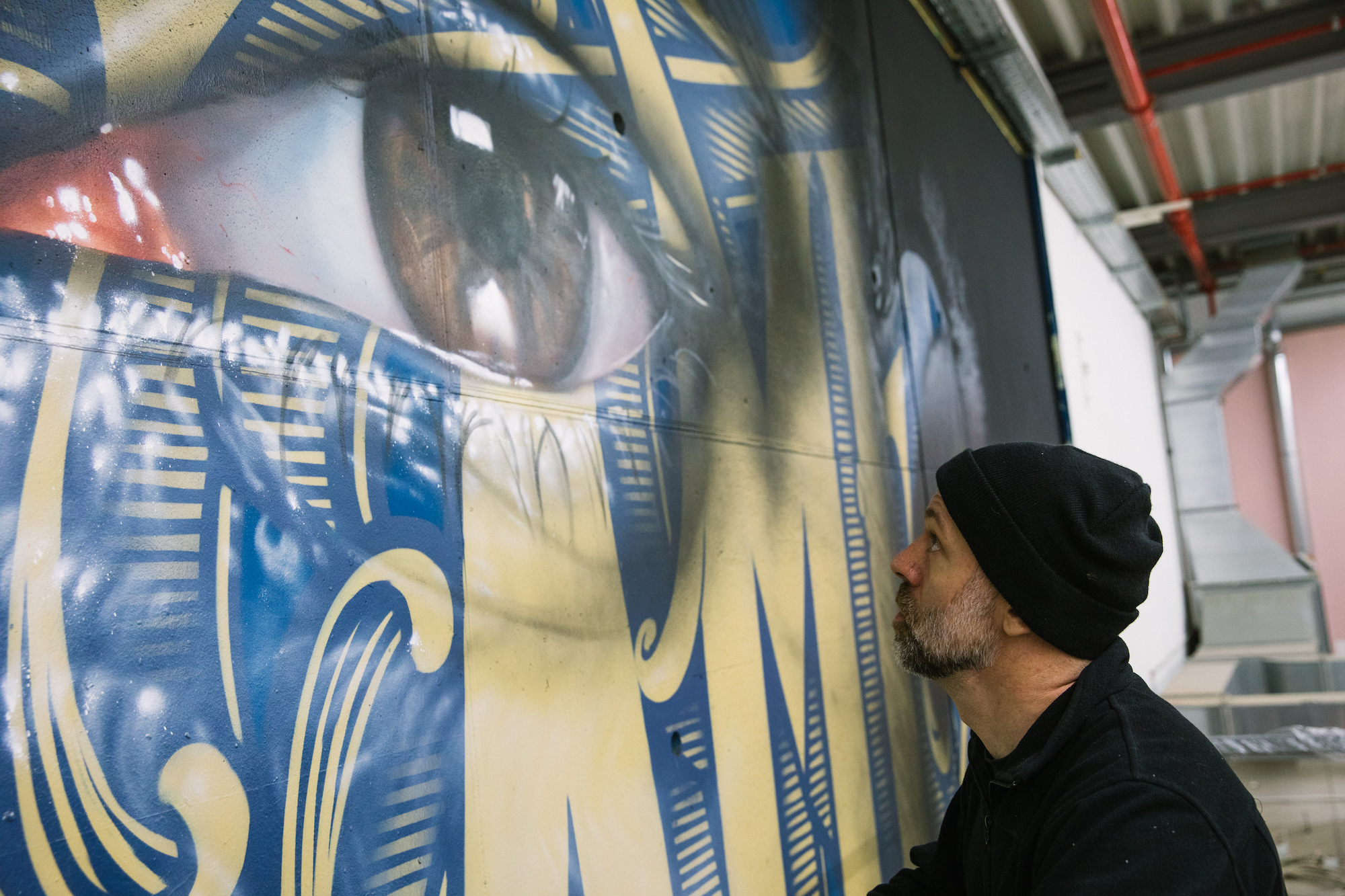 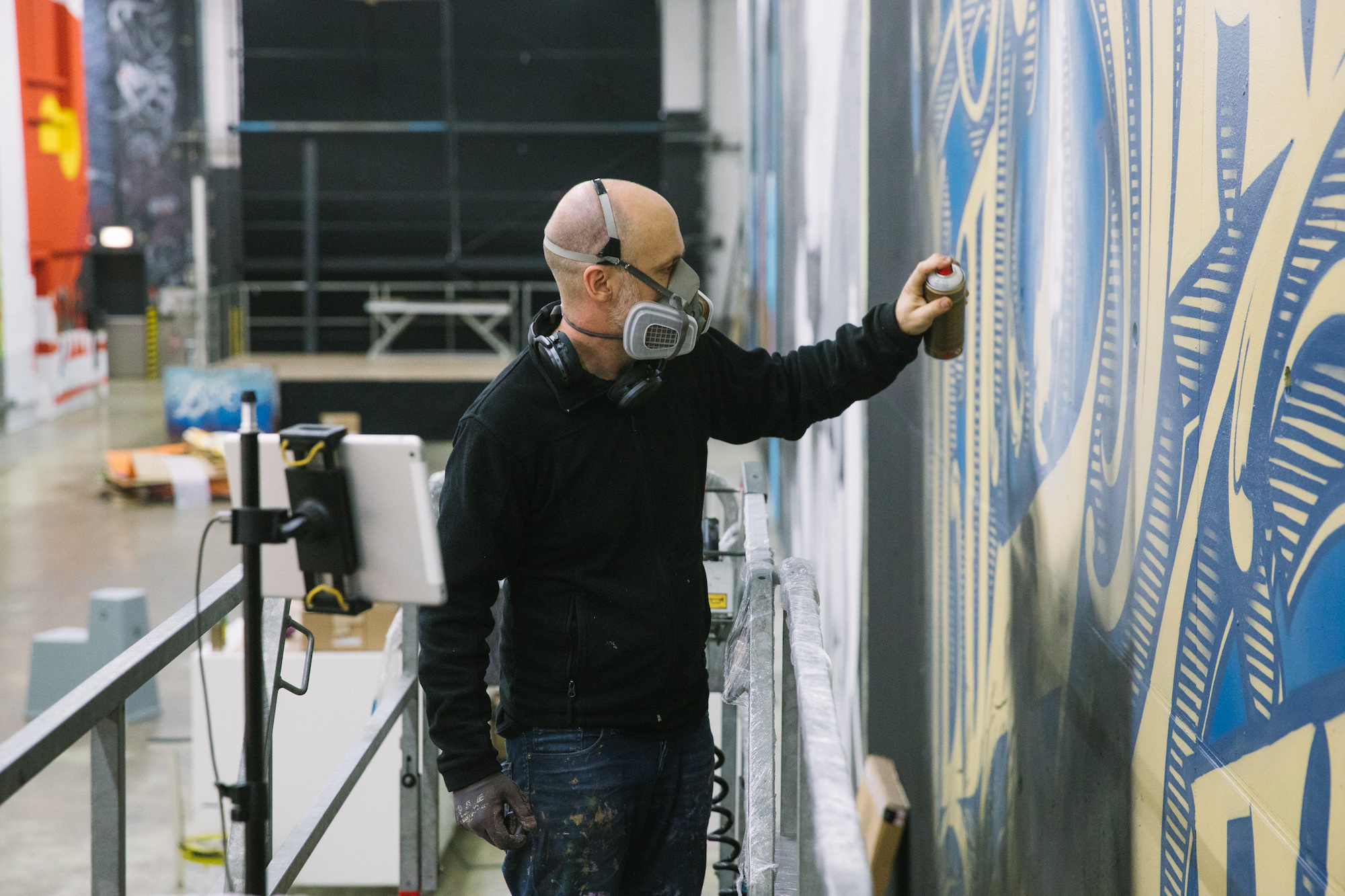 Falk Lehmann better known as AKUT was born in 1977 in Schmalkalden, Thuringia. In the early 90s he was one of the first to embellish his city – at that time still untypical in the graffiti scene – with figural works in a photorealistic style.

As an artist trained by the Bauhaus University in Weimar in the fields of visual communication and graphic design, his work also includes impressive photo series that address numerous social issues. Whether homeless in Hawaii, child labor in Nepal, studies of abandoned prefabricated buildings or refugee shelters as the new home of thousands of people from the Middle East, AKUT documents life on his numerous trips around the world. 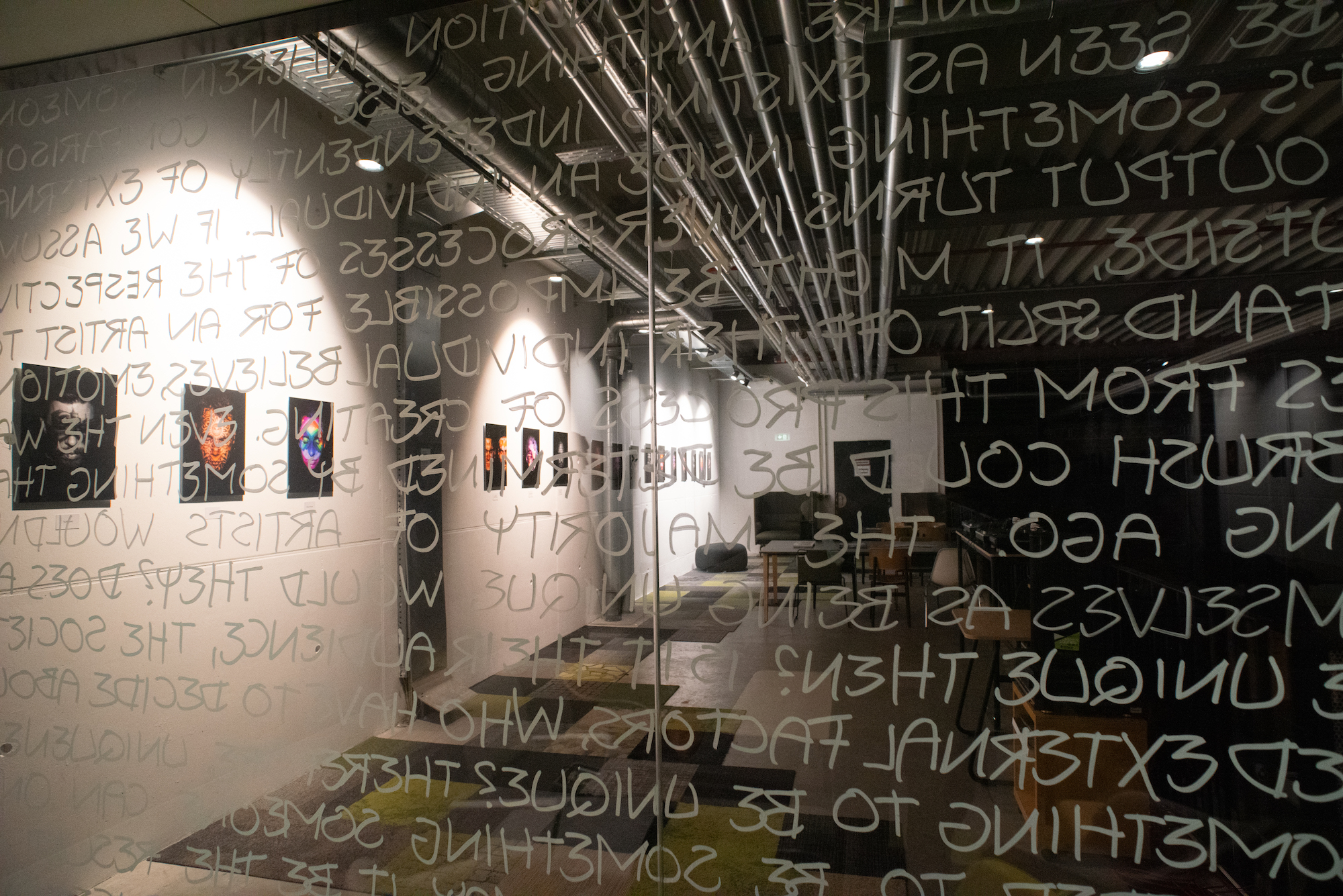 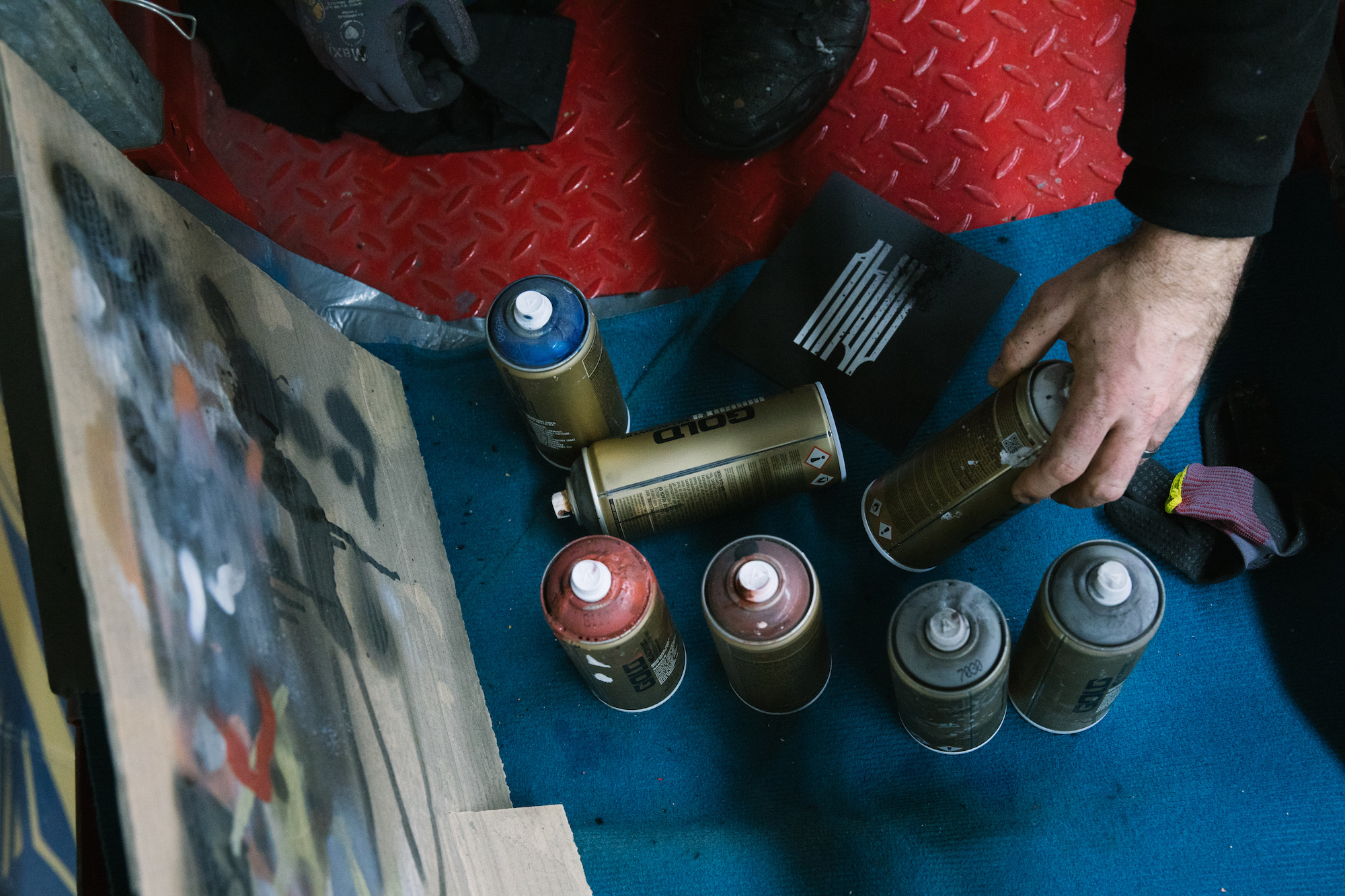 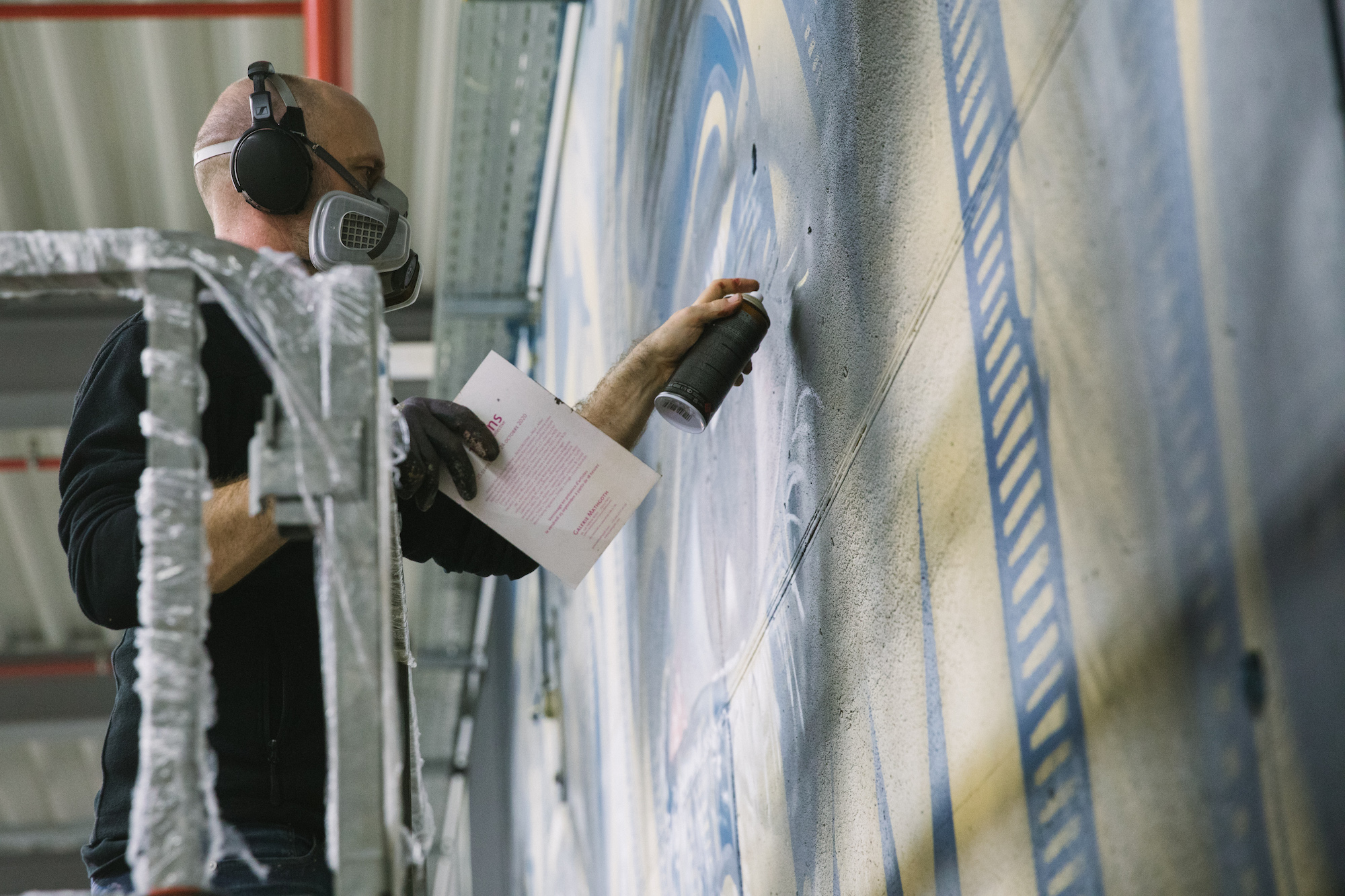 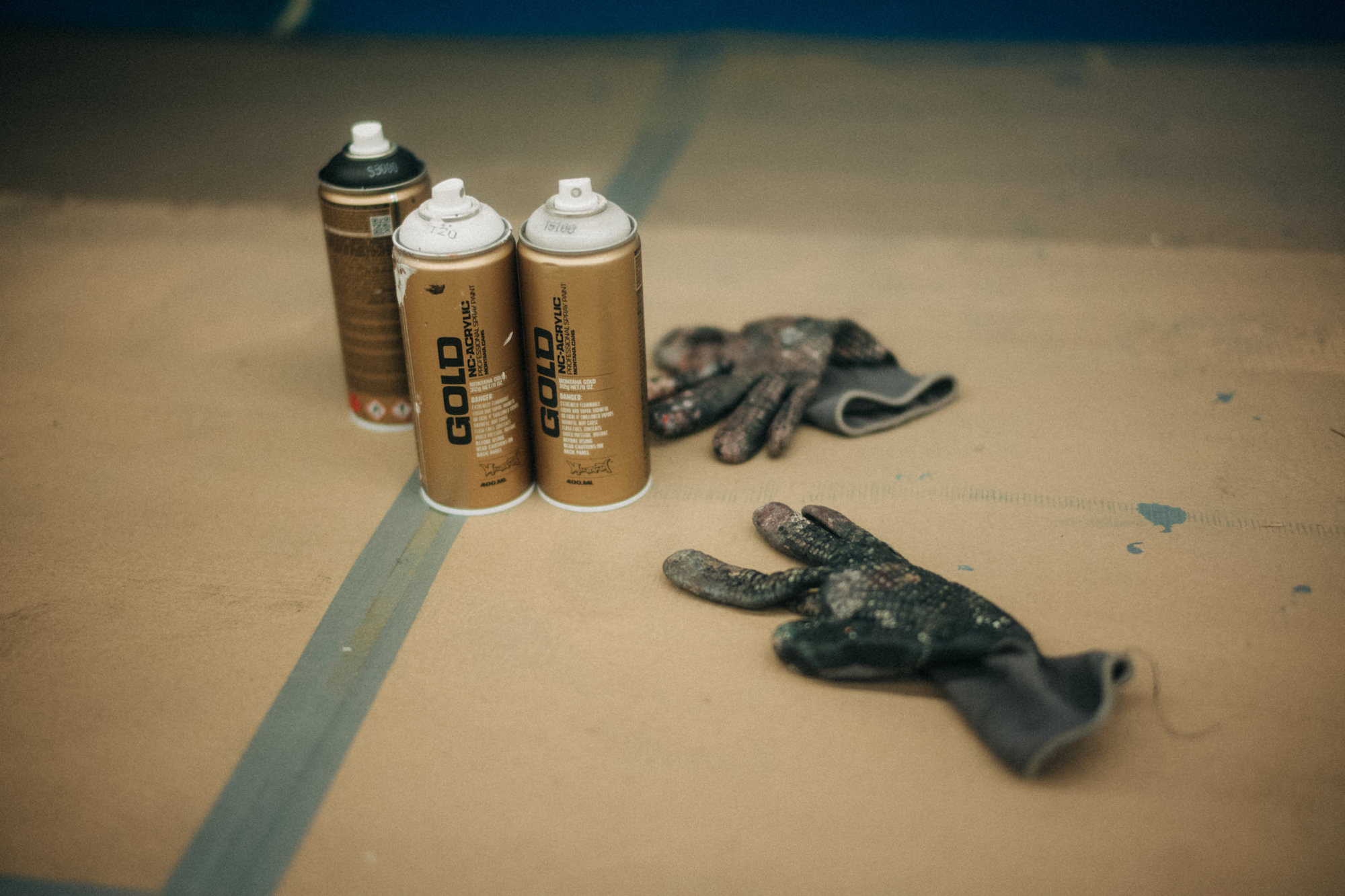 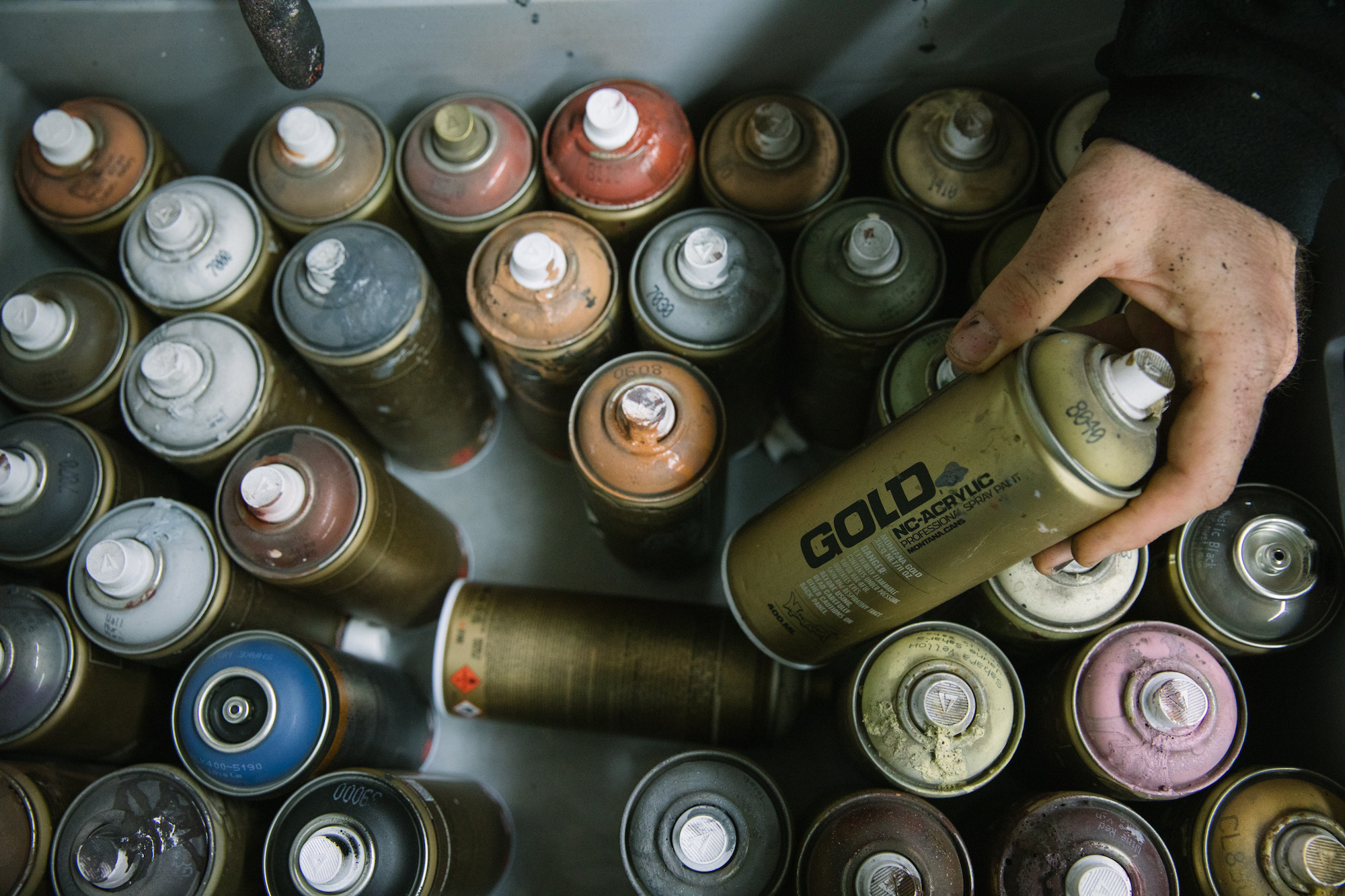 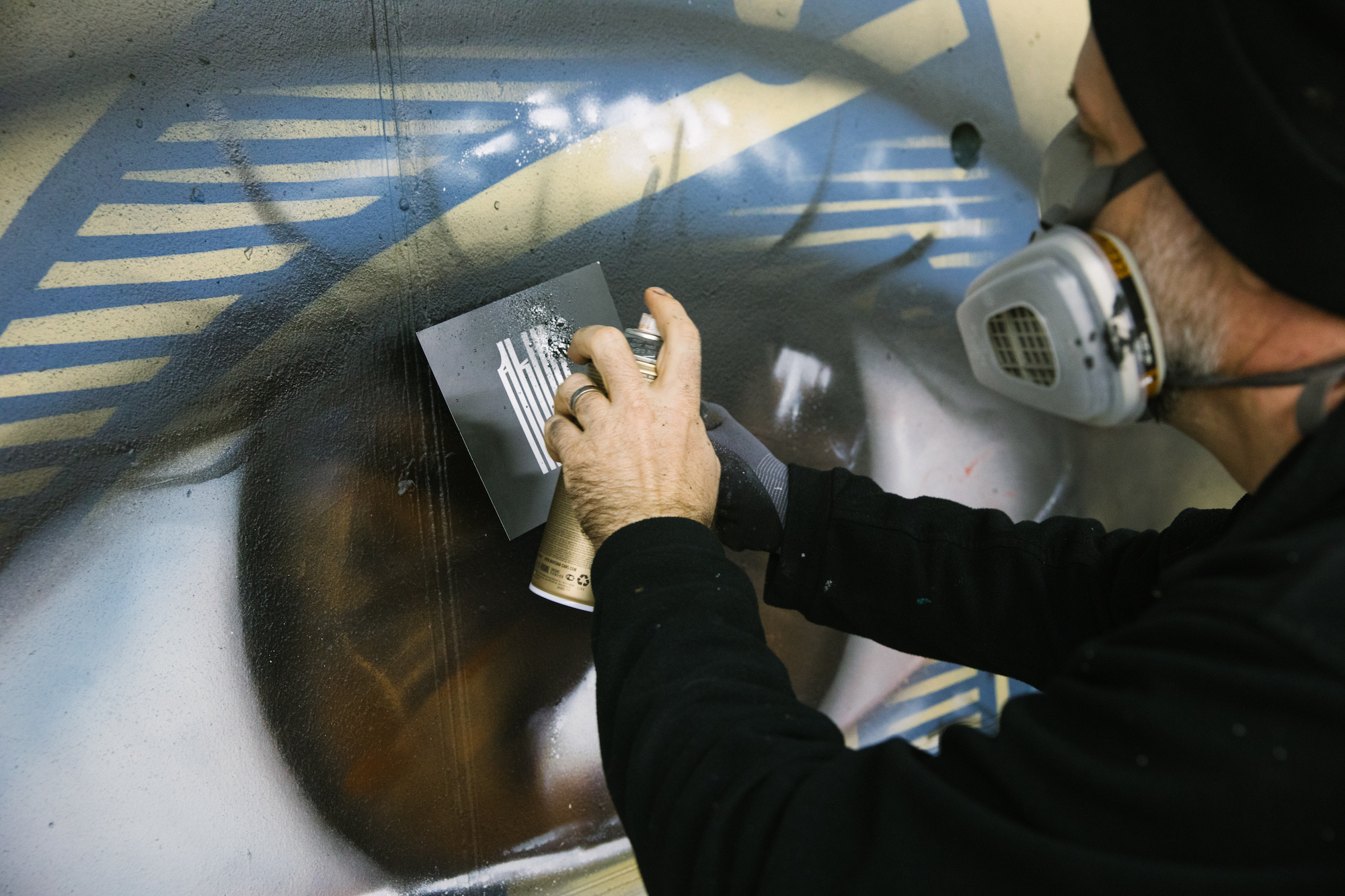 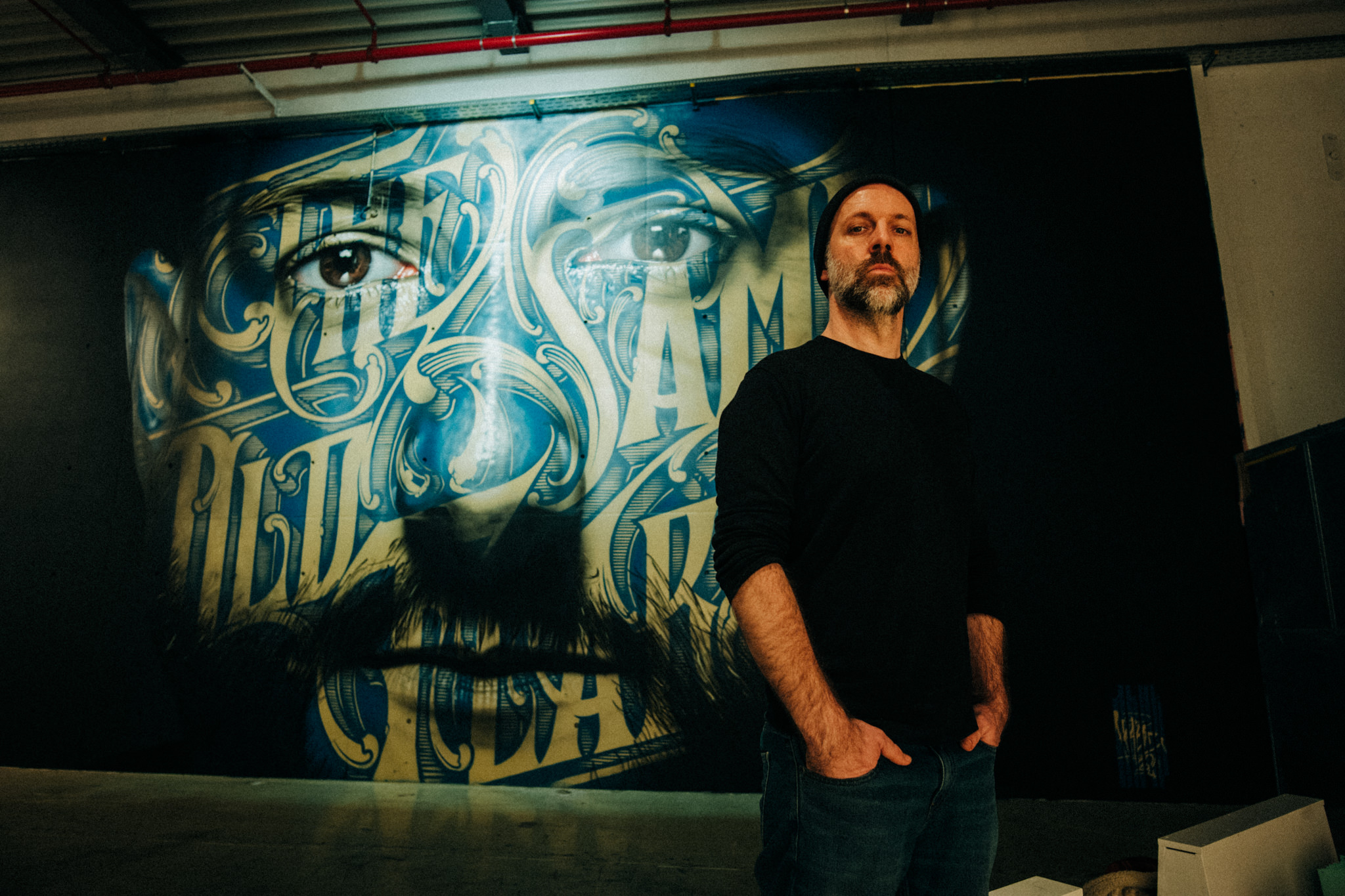 Most recently AKUT worked mainly in the studio and developed numerous works for group exhibitions in London, Paris and Los Angeles. In the course of this the portrait, as one of the most famous and oldest subjects in art, has also remained as the most interesting one for AKUT. With the solo exhibition individual liminality he emphasized the portrait as the magnum opus and moves it to the center of his creative work. Expressive yet delicate photorealism met subtile graffiti roots, creating today’s individuals dealing with their existence in liminality.

Check out below for more photos on the INSIGHT project.