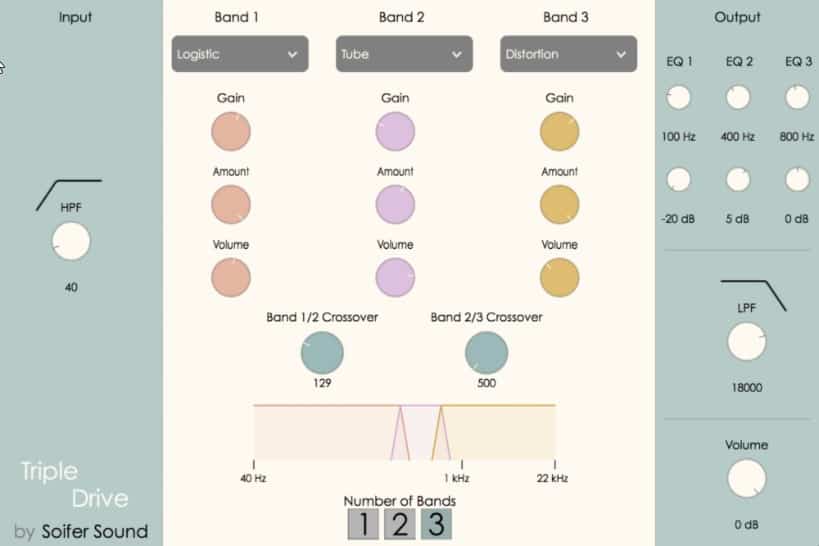 The first two are available for both macOS and Windows as AU/VST3, while Notes is only available on macOS for now (but will be released for Windows soon!).

TripleDrive is a multi-band distortion tool, while SampleSwap is a sample replacement tool. Lastly, the Notes plugin allows you to write anything for future reference while working in your DAW.

TripleDrive is a versatile plugin with several options to add and customize distortion. You can have three different bands, each with its own controls to adjust the effect. You can choose the type of distortion you want for any particular band from a list of ten different settings.

After selecting the type of distortion, you can adjust each band’s gain, amount, and volume.

TripleDrive has EQ controls that allow you to edit the three bands, while there are also two band crossover knobs to merge the effect from two adjacent bands. There is an input high-pass filter and an output low-pass filter. The multi-band visualizer helps you visualize the bands as you edit them.

The controls and the UI are neat and straightforward, with a modern aesthetic.

It’s quick to learn your way around it, and you can get some great-sounding distortions rather quickly. And they’re suitable for anything – from a subtle touch on vocals to overdriving a guitar or bass track, it’s versatile. And it’s performance-friendly as well.

SampleSwap is an interesting plugin that allows you to partially replace one drum sample with another for your desired effect. The tool works on top of a track and only functions once you choose an audio file as the replacement sound. You can drag and drop a file or choose from the explorer.

After selecting a file, you can set the decibel threshold at which the replacement sample will play instead of the input sound.

There are several other valuable settings – the level of the replacement, how much it blends with the original audio, the minimum time between retriggering replacement samples, and retrigger.

Retrigger triggers the replacement when original audio goes below the threshold before replacement audio is done playing.

The UI is minimal, aside from the original audio and threshold visualizer, making the tool more intuitive and easy to use.

Notes is a plugin true to its name. It has no sound designing capabilities; it simply saves text.

You can use it as a digital post-it note in your audio projects for easy reference and to prevent mishaps if you open your project a month later and don’t recall what you were doing. Simple and effective!