LET THE TALENT speak for itself—the vocals, the guitar, the classic-rock richness and swagger is all there. I fucking love this band and you should too. Go see them live; they have a sound that can truly fill a room, be it a theater or a stadium. If you’re not a fan of big-sounding rock ‘n’ roll, you will be after you see Greta Van Fleet perform. —Eben Sterling 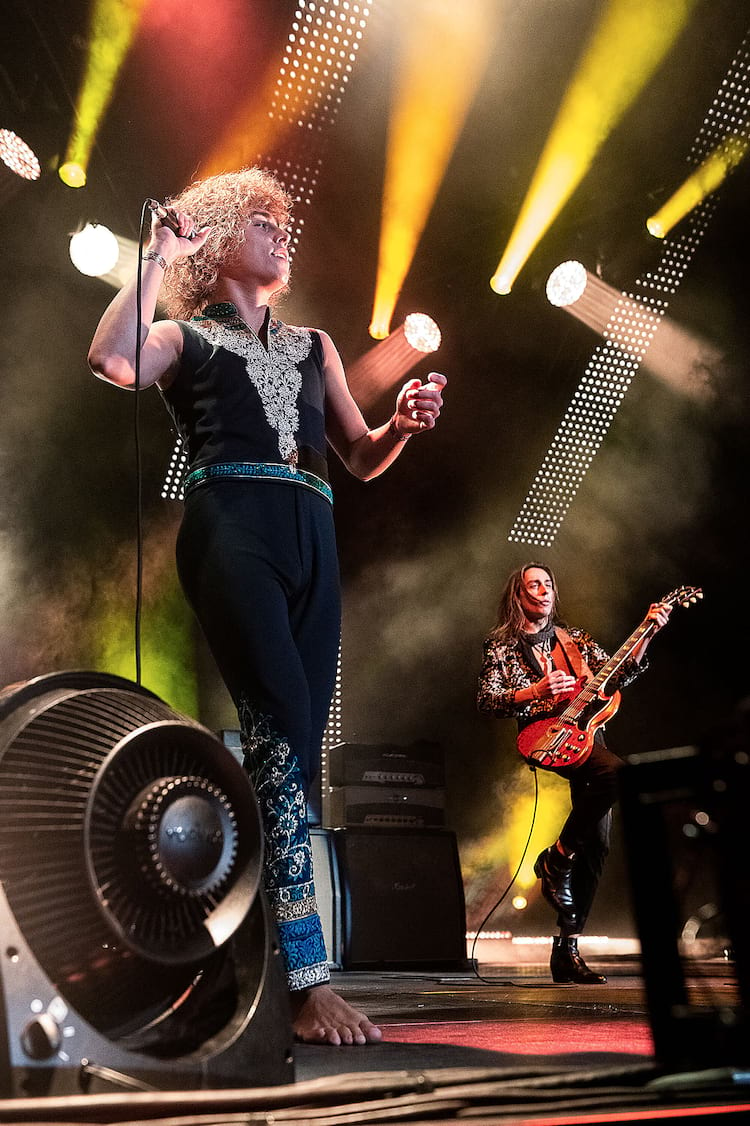 Greta Van Fleet has been a pretty important band for me. Over the past few years I’ve been in some pretty dark places and the music gave me the strength to push through.
Jake Kiszka: Yeah, that’s what music is about so I’m glad you got that from it.

What gets you through hard times?
Daniel Wagner: A lot of it is definitely each other, with music at the root. But being capable and allowed to do what we do every day and have that full freedom of expression through music is something that will pull us out of places.


J: Yeah, I think the freedom certainly helps get us through some of those times. We allow ourselves to do whatever we want to do musically and it’s really freeing.

That’s interesting. Being a young band and a group of brothers, one might assume you had stage-mom parents or some sort of control mechanism around you that your average garage band wouldn’t have to deal with, but it sounds like you have a lot of freedom.
J: Absolutely. The only thing we really do have on the road—when you’ve traveled over the last half decade, all over the world—is each other. You have four brothers. We were a garage band playing blues-type of music, from a small town of 5,000 people, who are now playing in front of tens of thousands of people. That is an interesting thing to consider—these four brothers, it’s sort of the hand we’ve been dealt. That gives us not only the independent freedom but the support and brotherhood it would take to ascend as quickly as we have.

That’s beautiful. Freedom isn’t always about being a maverick individual but is actually born from our connections with other people. That said, you guys are a big band—you’ve had multiple nominations and won a Grammy. Was there pressure to form you into this band or to push you in a certain direction?
D: One of the most liberating things in all of this is we really have been able to maintain complete artistic freedom. When we first formed a brotherhood and started a band back in high school and the end of middle school, we started writing songs together and it was all equal contributions. There were no limits. And even though we are now tied with a label and signed with various companies, the one thing that has never changed is that writing process and that complete freedom.

Trolling has become so prevalent nowadays. It seems that the amount of criticism you guys have taken has become “the story” of the band. That’s crazy.
J: That’s like a modern story right there. You look 20 years forward from now and that will be an interesting sociological bookmark of how somebody could deal with or view criticism in this century. It’s like, are you just going to lay down? Or do we say, Wait a second. What we are doing is important to a lot of people and I think it’s important to history, and I think it’s important to the next chain of where music goes, especially in terms of rock ‘n’ roll. Instead of lying down you have to fight and then I think that shows the rest of the world how it can be done.

Fuck yeah.
D: Rock ‘n’ roll and its roots rely on the live-performance aspect of it and we value that. I wish that so many of the critics that don’t really stick their noses too far into it would at least experience the live scenario.

D: Yeah, and don’t go off of media; don’t piggyback off of other people’s ideas; go out and see it yourself.

J: And at least you can form a reason why you actually hate us.

The music of Greta Van Fleet hearkens back to a time when being a rock ‘n’ roller was a decadent extravagant experience. Are you guys living an extravagant lifestyle?
D: I don’t think any of us desire that. Even if it was available to us, I don’t think any of us would jump towards that. Yeah, historically and thematically that is kind of like what it had become, but when it comes to home—which is what I assume you are asking about—that’s not really what any of us want. We are very appreciative of what we have. We have tiny little homes in Nashville and we’re able to put guitars and amps in them. We have a little community. It’s kind of similar to our upbringing in a way. We are not what you think we are.

J: I suppose that option is always on the table but I don’t think any of us desire that. We’ll leave that up to the rappers. 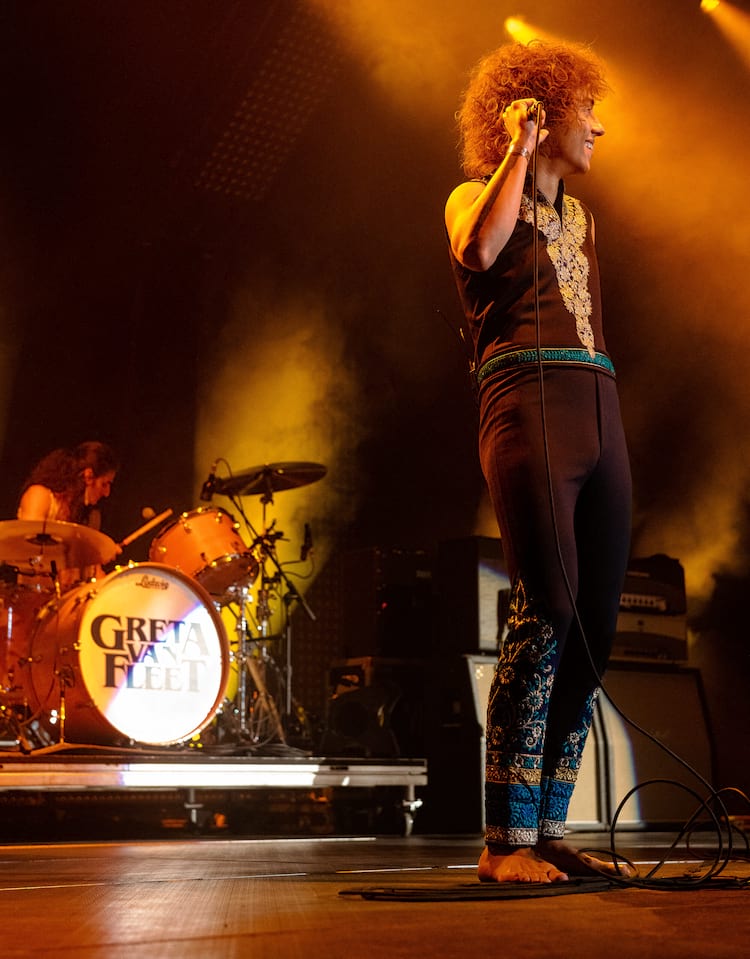 Thrasher was founded on vinyl records—listening and collecting—and has kept that going over the years. I read that you guys grew up on your parents’ record collection.
J: Yeah, there’s a lot of kids of our generation that grew up with CDs, and then it quickly went to iTunes and Spotify. But we grew up with a lot of vinyl. It was from all the records that were sort of lying around. And we started tripping on them with Daniel and the three of us. We had a ton of blues records. That was the foundation of our collective inspiration. We grew up with Muddy Waters, Howlin’ Wolf, BB King, Albert King, all the Kings, John Lee Hooker, Otis Rush, Lightnin’ Hopkins. That was sort of the basis of it. There was also Motown laying around, soul, funk, folk music and R&B, so there was this whole sort of vinyl playground to a certain degree. It was very different. You’d be riding the bus home from school and there was pop-radio being played and you’d go, This is not as good. There’s no truth to it. It’s not like what we’re hearing at the house. That was a turning point for us.

So tell me about the new album.
J: It was a real interesting process recording it. We were in LA and it was a really different experience. We were coming from an angle of creating something cinematic and orgasmic to a certain degree. We were in a city of film—Hollywood—and I think a lot of that geographically was influential in The Battle at Garden’s Gate. It’s certainly an album that we always wanted to create. So I suppose it was a different sort of feel but ultimately it was the four of us who were writing the songs.

D: It was something we approached a little differently, too. From the Fires, Black Smoke Rising and even Anthem of the Peaceful Army, they were all recorded when we were at a slightly-younger period of our existence. Then basically right after Anthem of the Peaceful Army until The Battle at Garden’s Gate we were nonstop on tour and we started to build up these chops as musicians. And we really could kind of sense our evolution in skill, but also in writing and approaching the studio. So we came into the studio with the idea that we wanted to record the album live, as we perform live, as we reach people. That’s where we are at our strongest—when we are all four in a room looking at each other and performing live and getting that take. So we did the album live. We also did it to tape, an old tape machine but with modern tape. It makes each take mean so much more. And honestly that is the most effective way to achieve what Jake was saying—that cinematic, orgasmic, large sound.
0 Facebook Twitter
Skateboarding
share on
Prev Next
X