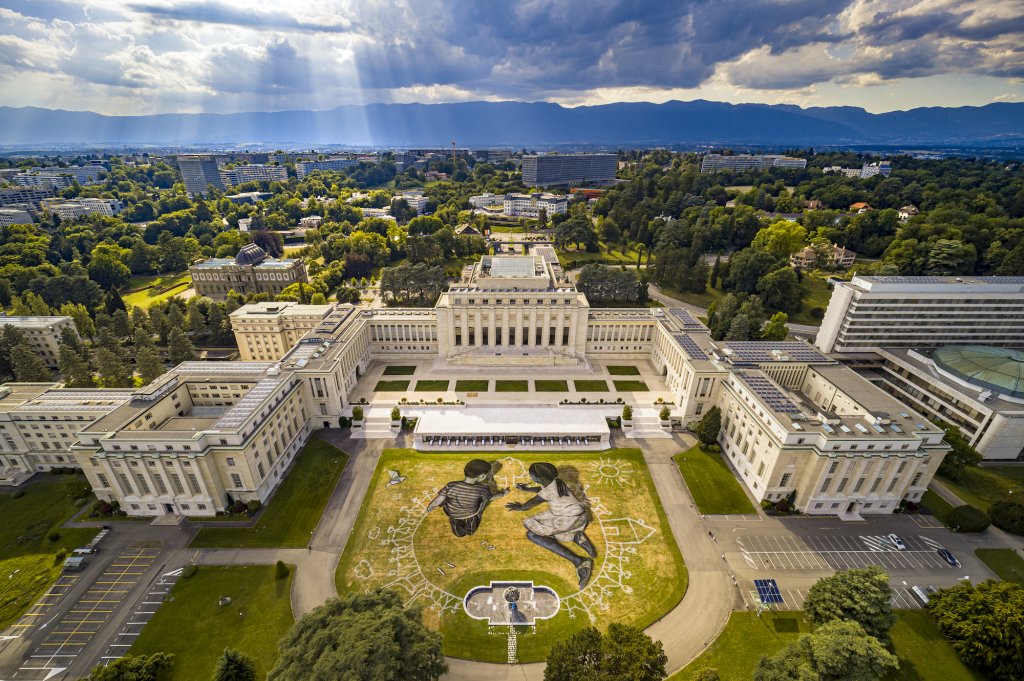 “World in Progress” is a triptych created by French-Swiss land artist Saype. Painted at the U.N. headquarters in Geneva, New York and Nairobi, the three monumental paintings retrace the iterative creation of an ideal world by two children. From drawing to origamis, and ultimately coming to life in Nairobi, the giant biodegradable and ephemeral frescoes are directly painted on the lawn of the United Nations.

As the message of hope, “World in Progress” reminds present generations of their duty to the children of today and the generations to come not to lose sight of peace between nations and the preservation of the world’s environmental heritage.

It all started at the U.N. headquarters in Geneva to celebrate the 75th anniversary of the institution. In June 2020, the realization of “World in progress I” offered an optimistic message while the pandemic revealed the fragility of our societies. The two children draw a farandole that links humans, animals and their environment without borders and discrimination.

Created in September 2021 at the United Nations headquarters in New York, “World in Progress II” shows how children build what they had only sketched in the first stage. Using blank sheets of paper, origami folds give shape and form to the dream world of tomorrow. On the other side of the ocean, a universal farandole emerges in the middle of Manhattan’s skyscrapers.

“World in Progress III” by Swiss-French artist Saype is the final step in the series. It represents an ideal world drawn and constructed by two children at the Headquarters of the United Nations (U.N.) in Nairobi, Kenya.

The artwork covering 7,500 square metres was produced with biodegradable paints made from natural pigments such as charcoal and chalk.

The project is supported and gifted by Switzerland to the U.N. to celebrate the 50th anniversary of the United Nations Environment Program (UNEP). Thursday, March 3rd, saw the commemoration in the presence of H.E. Hon. Uhuru Kenyatta, President of the Republic of Kenya, Under-Secretary-General Zainab Hawa Bangura, Director General of UNON, Under-Secretary-General Inger Andersen, Executive Director of UNEP, H.E. Valentin Zellweger, Ambassador of Switzerland and the artist Saype.