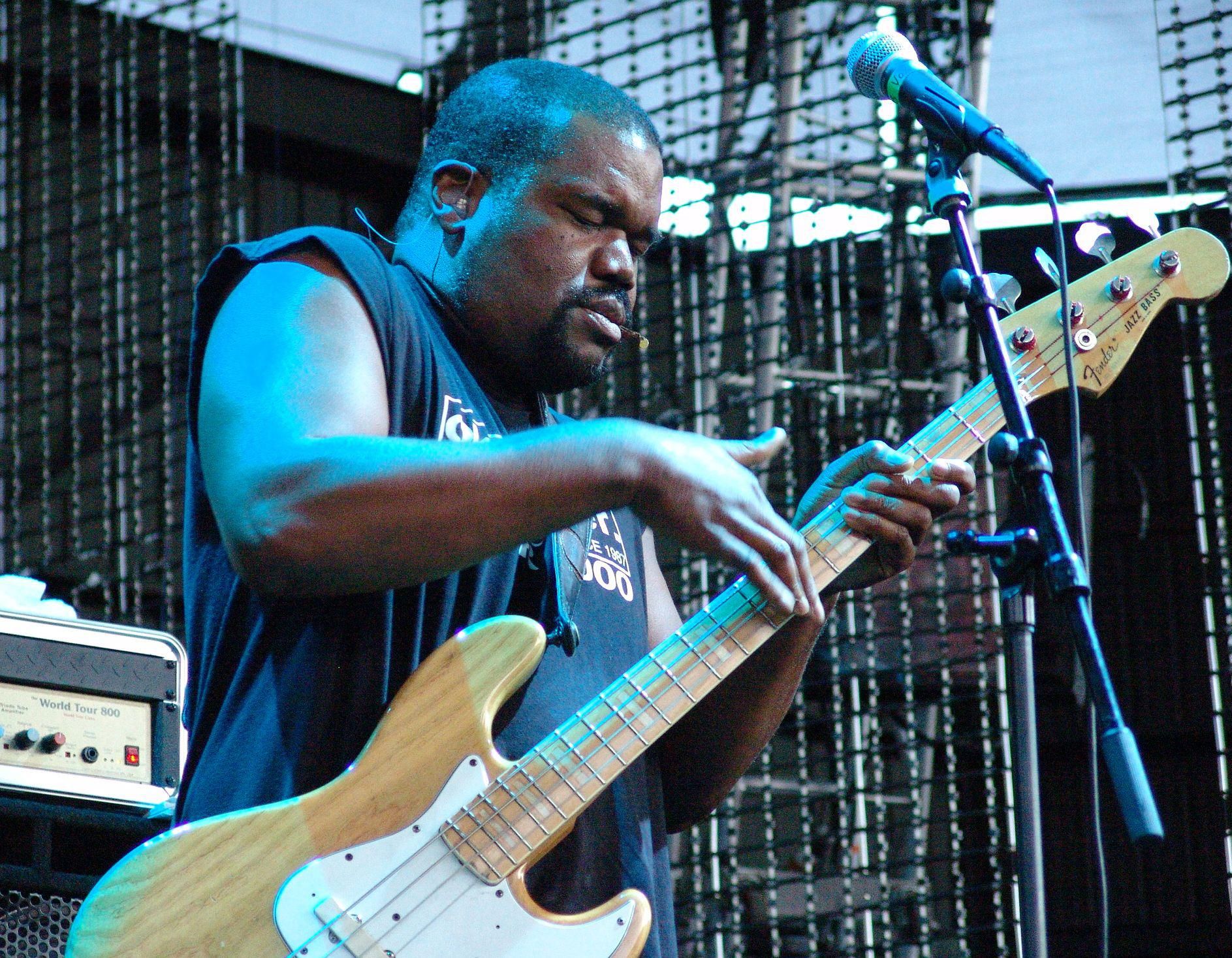 The Hub of Hip-Hop Bass Playing 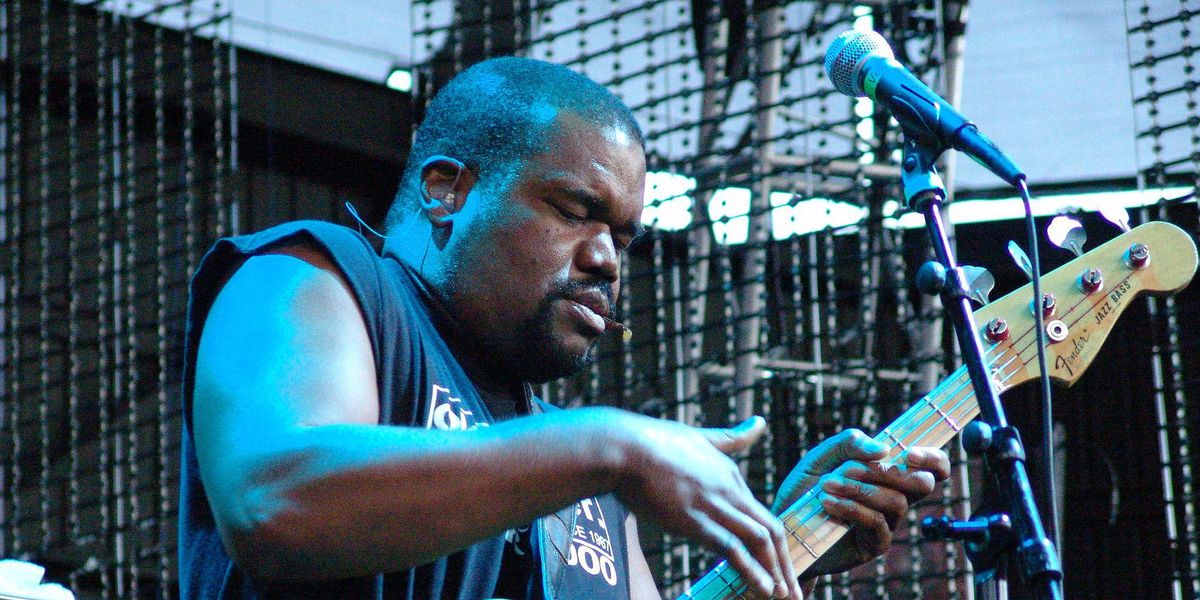 What’s in a name? How do names define us and the lives we live? Within my culture, everybody has both a given and “chosen name.” A hub is literally the central part of a wheel, but symbolically it’s that thing around which all motion happens. Hub, aka Leonard Hubbard, was the original bassist in the Roots, and one could argue that if hip-hop had a hub, it would be bass. Sadly, Hub lost his long battle with cancer in December 2021.

I first met Hub when the then-unknown, Philadelphia-based band randomly moved to London in the early ’90s. It turned out this move was a strategy suggested by jazz alto saxophonist Steve Coleman. “Move them to Europe and push them as a jazz act,” he is rumored to have told the band’s manager, the late great Richard Nichols. And so he did.

In those days, hip-hop (distinct from rap music) was a thing, but live hip-hop was certainly not. The creation of hip-hop was very much wrapped up in some unfortunate, shortsighted political decisions that affected U.S. inner-city high school education. This led to the removal of music and art programs from those schools, which many of hip-hop’s architects attended. Access to musical instruments became all the more rare, interrupting an important thread that stretched back to a period somewhere between the abolition of slavery and Louis Armstrong picking up a horn. That arrested development continues to this day.

The HuB (The Roots)

Hub goes solo with his Fender Jazz Bass, demonstrating a commitment to groove and melody as well as a raw and uncompromising percussive technique.

By the time the Roots came along, this thread/tradition that ran through all African American music had been almost completely severed. Fifteen years earlier, a mostly instrument-less generation created hip-hop out of their deep need to be heard and express themselves, eventually turning to alternative methods: rapping, turntables, scratching, breakbeats, drum machines, and, eventually, samplers. So, in some ways late-’80s/early-’90s hip-hop stood apart from—though it was still most definitely related to—what came before. Thus, drummers and bassists within hip-hop were an anomaly. In fact, hip-hop was actually a large part of the reason why they were out of work!

Later on, live hip-hop bands such as the Roots had to come up with a “new” language and approach that worked for instruments, while still retaining all the things that people loved about this music: the groove, graininess, and nostalgia of old funk breaks; the history, musical complexities, and sophistication of jazz samples; the low-end-heavy head-knocking grooves and rhythmic precision from drum machines; and, of course, the emcee’s lyrics and rhymes, which gave it all meaning.

The thought of a bass player being able to mimic 808 bass drums tuned completely down with decay all the way out was equally bizarre. However, the Roots achieved these and so many other sounds essential to hip-hop.

Rich Nichols played an architectural role in sculpting the Roots’ sound on record, but onstage this was the domain of the musicians—in particular, drummer Ahmir “Questlove” Thompson, keyboardist Scott Storch, and bassist Leonard “Hub” Hubbard. Before they came along, it could be argued that the instructions on how to really play hip-hop live didn’t exist. The thought of a ’90s drummer being able to sound like 7 seconds of looped Clyde Stubblefield from the ’70s on vinyl was bizarre. The thought of a bass player being able to mimic 808 bass drums tuned completely down with decay all the way out was equally bizarre. However, the Roots achieved these and so many other sounds essential to hip-hop.

Anybody fortunate enough to encounter a Roots show between 1992 and 2012 knew without a doubt that they had mastered hip-hop! They became as comfortable with recreating classic sounds/breaks from the ’50s, ’60s, ’and 70s as they were with creating their own iconic ’90s/’00s (and beyond) sound. The Roots eventually became the go-to “backing band” for almost every major live hip-hop show, beginning with their Okayplayer tours and maturing over the course of 10 years of Roots Picnics. Today, they push their skill for metamorphosis even further into the realms of rock, pop, country, and whatever else nightly on The Tonight Show.

For being a part of what made this all possible, Hub—the don of the black hoodie and chew stick—deserves an honorable mention and some credit. Hub’s approach to playing his ’90s blonde Fender Jazz (with the white pickguard) or completely battered upright was pretty different from what came before. It had to be.

Intro / There’s Something Goin’ On

Take a listen to the Do You Want More?!!!??! album, for example. Respect of Groove! When he wasn’t taking extended mid-set, PA-system-destroying bass solos, Hub never tried to be the most attention-grabbing or out-front bassist, like maybe Jaco in Weather Report. But what he did endeavor to do, as the wise Reggie Washington would say, is “keep the bottom.”

He succeeded. Who knows … maybe Fender will create a signature Hub model?