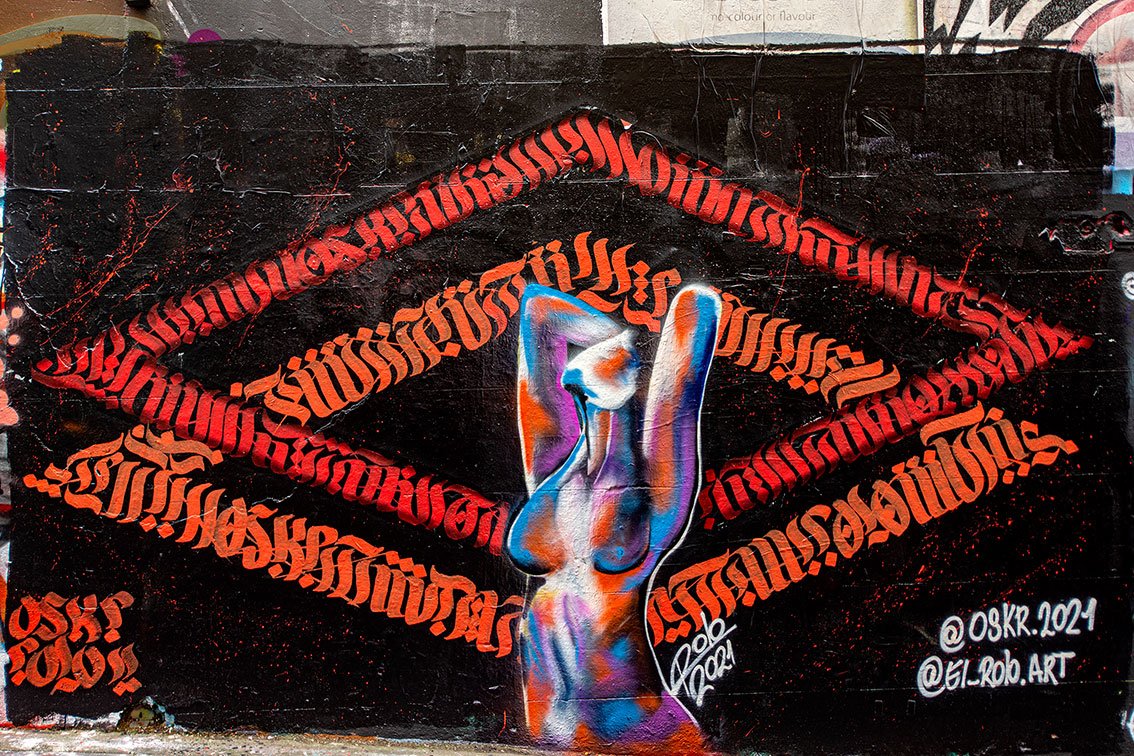 rolo / el rolo / Carlos Mejia is a street artist from Medelin Colombia in Melbourne from 2020-> painting mainly in Union (before it got destroyed with gentrifying destruction) and Hosier lane his Straker style neon outlined figures, creatures and scenarios.

This page should probably be dedicated to a Mr adrian doyle who wrote one of the most hateful and ridiculous (for someone of his apparent stature in the street art community) blog posts ever about an artist in Melbourne’s most famous Hosier Lane (none of the things he said about hosier are in keeping with its nature, how it operates and thrives).

FYI the og graff term is actually “don’t cap what you can’t burn” – Doyle waters it down attempting to apply it to street art and Rolo in particular: “don’t go over something if you’re not going be better than it” LOLOL!!!! Doyle also states that L-Rolo has “has systematically destroyed Hosier Lane, one mural at time” apart from the fact that its El-Rolo not L-Rolo, and that Hosier had almost no ‘murals’ in it at the time he painted there, the percentage of Hosier lane actually ‘destroyed’ by El-Rolo (at his peak) is not even 20% let alone 100%!! Does Doyle actually write for the Herald Sun? Is he a Murdoch employee? He sure does like propaganda!

The reason Hosier Lane works is because anyone can paint anything, anytime. Graffiti, Street art, poetry, pasteups, tags, pieces, throwies, murals, sculptures, even extinguisher graffiti… it all works.

El-Rolo was one of the few artists brave enough to keep painting through all the ridiculous Melbourne CoVid lockdowns!

“systematically destroyed Hosier Lane” becomes “now taken around half the lane” within two sentences. Seems Mr Doyle cant even lay out a logical or persuasive argument and regardless tries to push his hateful agenda.

Movida has been Movida for a very long time. Doyle didnt even spell check his Movita errors. I get that it sounds phonetically similar, but if you’re going to destroy someone to fulfill your transient need to hate, at least do it properly, but better yet, dont do it at all! The world needs less egocentric self-absorbed bullies Mr Doyle! Why not nurture instead of search for an antagonist? Want us to compare Doyles art to El-Rolos? There is no comparison!!!

**allThoseShapes will remove the references to Doyle and his ludicrous cbd news article when he removes the actual article itself! Appologising to El Rolo (which apparently Doyle has done) is a pathetic pointless political gesture if the article is still live!!!**