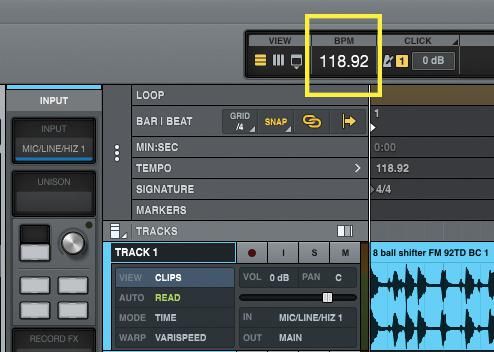 Hello and welcome back to another Dojo. This time I’m going to be talking about the joy of using varispeed in your tracking productions to give your music a different timbral shift and open you up to some very creative possibilities.

Varispeed is essentially a way of controlling pitch by adjusting playback speed. In pre-digital days, turntables and tape machines used different speeds for both recording and playback. Turntables had three speeds: 78, 45, and 33 1/3 rpm, and pro tape machines had three standard choices for starters: 7 1/2, 15, and 30 ips. In essence, if you record a fast passage at a slow speed, once it’s played back at normal or standard speed the pitch and tempo will go up. We’ve all heard the chipmunk effect—high pitched, helium-tinged vocals achieved by recording at a slow speed and playing back at normal speed. But there are more interesting and subtle ways to use varispeed.

My three favorite examples are Les Paul’s “Caravan” (on 1950’s The New Sound), the piano solo played by George Martin on the Beatles’ “In My Life” (Rubber Soul), and the Beatles’ “Rain,” the B-side of “Paperback Writer” (which is my favorite single the Fab Four released). The first two examples use varispeed on various tracks within a normal-speed mix. With “Rain,” however, the entire mix was shifted down in pitch (and tempo) after it was recorded at a faster tape speed! It was also the first Beatles song to feature reversed vocals, which occur at the end. For fun, try singing along with this song and you’ll feel like you’re in audio quicksand. It’s almost impossible to match Lennon’s words exactly because all your consonances will have to be slower than normal.

With old school varispeed, pitch and speed (transients and tempo) are tied together.

I want to make a distinction here: It’s important to know the difference between time stretching (changing the duration or speed of an audio signal without affecting its pitch) and pitch shifting (changing the pitch without affecting the speed). With old school varispeed, pitch and speed (transients and tempo) are tied together. This means the transients, formants, and overtones of all recorded material (an instrument, a vocal, or even a mix) are shifted. Which leads to an intriguingly unnatural sound, not possible in the real world. How can we do this in our DAW? For starters, make sure your DAW of choice has a varispeed function or setting. I’m going to show you how I do this in Universal Audio’s LUNA (which is free with an interface hardware purchase).

We need to do some prep work to start. Let’s assume you are recording a guitar/vocal at 100 bpm in the key of E (try singing and playing a 16th note palm-muted rhythm part on your guitar). Now, do the same thing again, but make a “varispeed” version of it by speeding the tempo up and playing/recording it in a new key. You can compare the differences when done. That should help your ears adjust to the concept.

Before you begin, calculate the transposition to tempo ratio. I use a great app on my phone called musicMath ($5.99 street) to do this. For this example, to transpose up a minor third (from E to G) the new tempo is 118.92 bpm [Fig.1].

Next, change the tempo in your DAW to 118.92 bpm, and then play/sing it again in the key of G (up a minor third) [Fig.2]. If you’re not sure where the chords are in the new key, use a capo at the 3rd fret and play the same chords you’ve been playing. Personally, I like playing without a capo because the voicings are different and the sound will be as well. More fun!

Now, render/bounce the new performance and import it back into your DAW session. Next—following the cue of “Rain”—enable the varispeed function in your DAW [Fig.3] and change the tempo to 100 bpm. If you look at what I’ve circled, you’ll see that the mode is set to “tempo” and the warp is set to “varispeed.” Your particular DAW may be different, so make sure your speed/tempo and pitch are linked. Otherwise, when you slow the tempo back down to 100 bpm, the recording will still be in the key of G, but slower. As usual, I invite you to come to bryanclarkmusic.com to watch this technique in action. Have fun and try this on everything! Until next month, namaste.