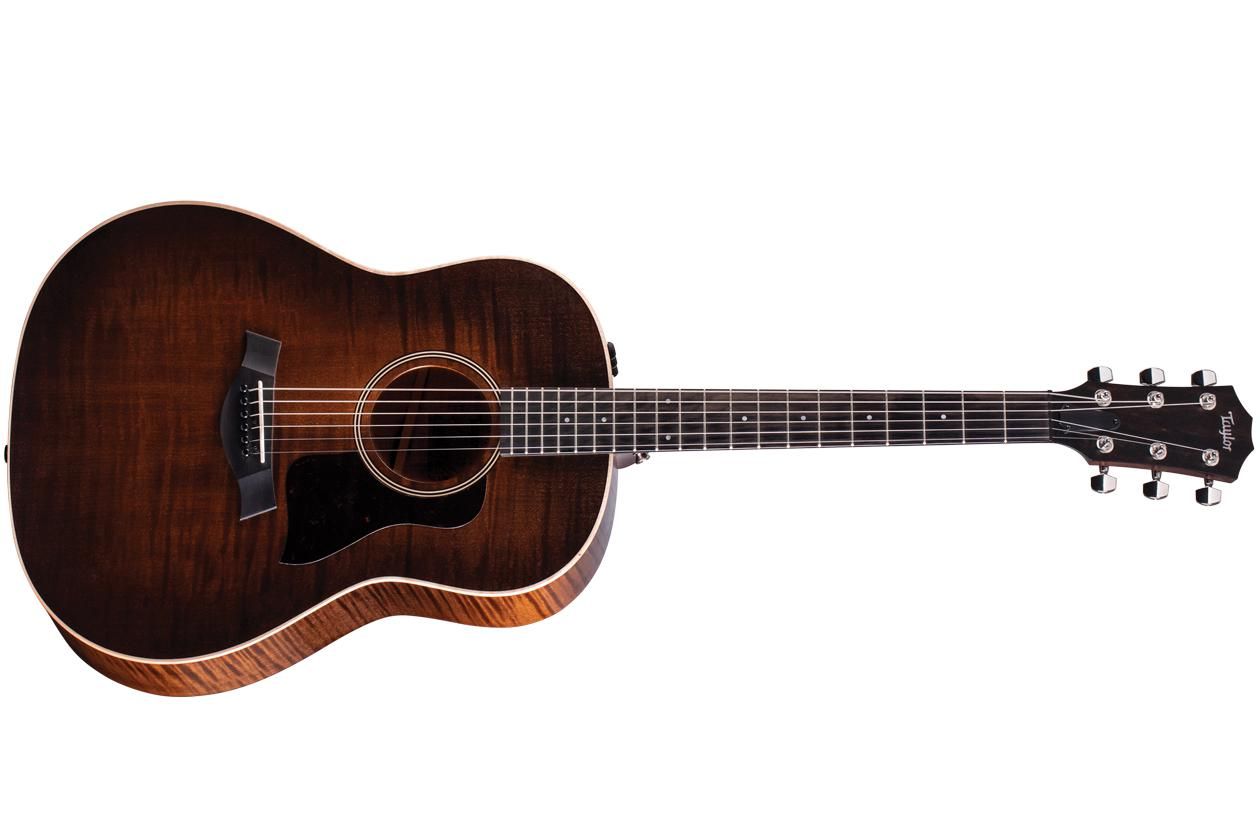 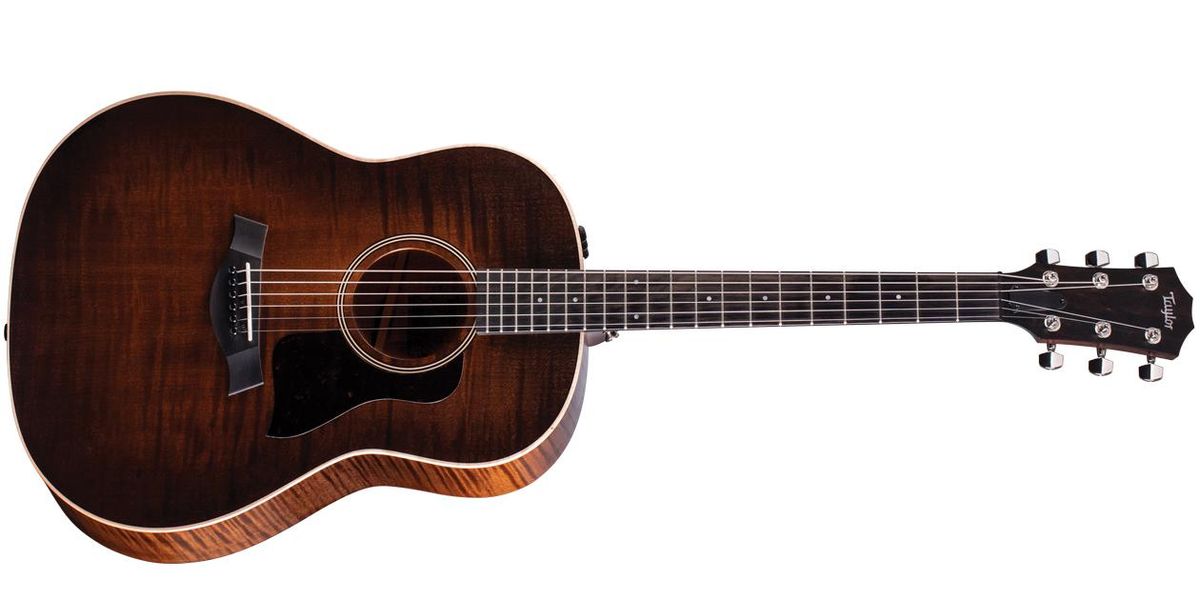 One of the nice things about designing guitars for a company like Taylor is that you’re less burdened by tradition. Even though the builder is now nearly a 50-year-old institution—not to mention one of the biggest guitar makers in the world—to many acoustic traditionalists they are still very much the new kid on the block. While such fresh-faced “newness” may mean flattop classicists look askance at your every move, it also means you can introduce a design departure like the company’s V-Class bracing without risk of rebellion from your consumer constituency—or, for that matter, build a dreadnought with a top fashioned from big leaf maple.

A maple top is one of those things that, according to traditional acoustic design think, shouldn’t work very well. Yet the AD27e Flametop proudly makes its maple top both a centerpiece of its sound signature and its visual identity. The results, in both respects, are unique and, in typical Taylor style, prove that acoustic guitar design still has room for imaginative deviations from the norm.

In spite of the simplicity and musical purity it projects, an acoustic guitar is a complex organism. Small changes in design or materials can be transformative. V-Class bracing is no small change, however. Certainly not when compared to the X-bracing that has been the standard for flattops for generations. Fundamentally speaking, V-Class bracing situates the most substantial braces in a V shape that tapers gently along the body’s center from a point just forward of the endpin. While it can be hard to say definitively what V-Class bracing does and doesn’t do to a flattop’s sound, an increasing sample size suggests that it tends to improve sustain, and even intonation, by leaving larger sections of the top to vibrate freely and aligning the biggest braces with the strings. In the case of the AD27e, V-Class bracing didn’t just improve the sound. According to designer Andy Powers, V-Class bracing is, in fact, what made the use of a big maple top feasible.

If we assume that V-Class bracing definitively improves sustain (and certainly our colleague Joe Gore heard as much in his review of the K14ce), then Powers’ assertion makes sense. Maple is generally less lively and works better as a reflective surface for backs and sides. Few if any large-scale production flattops have used maple as a top wood, and those that have, like Gibson’s acoustic/electric Starburst, employed a maple top because its less resonant properties reduced feedback in amplified situations. But the maple top on the AD27e resonates beautifully. And though the appeal of its sound won’t be universal, it occupies a very cool niche.

Unlike a lot of dreadnoughts, the AD27e also responds dynamically to a gentle touch.

Taylor’s American Dream dreadnought is a beautiful shape. Its curvaceous lines project hints of J-45 influence and big Taylors like the 855. It’s a lovely reconfiguration of the classic dreadnought profile. But it also likely serves a very practical purpose in the AD27e, in the sense that the big body does much to compensate for the maple top’s less lively characteristics. The tones that result have a beautiful and interesting sense of balance. You won’t find the thumping grand-piano-like low-end resonance of a D-28 in the AD27e, yet it projects volume as a dreadnought should and gets loud without sounding brash or overdriven—probably because there is less low-end woof to obscure the pretty midrange and clear, chiming top end. Unlike a lot of dreadnoughts, the AD27e also responds dynamically to a gentle touch. And I found its sensitivity in these settings more reminiscent of a 00- or 000-sized instrument.

The AD dreadnought shape isn’t just pretty to look at. It’s also an ergonomic delight. The aft end of the body is considerably slimmer than a Martin D. That, and its slightly more pinched waist and sloped shoulder, make the whole body feel more compact and easier to hold for extended periods. But, as with so many higher-end Taylors, the foundation of its inviting personality is its playability up and down the neck. The action feels exceptionally low and fast, yet there isn’t a trace of string buzz or a dead spot anywhere—even when you strum vigorously. The low action also has the effect of making fingerstyle chord melodies feel extra fluid and lyrical—a quality well suited to the AD27e’s more subdued but ringing tonality. And while our review Taylors have almost always shown up with impeccable intonation, the AD27e’s spot-on intonation—even after two-cross country journeys in the dead of winter—makes us wonder if there isn’t something to Taylor’s claim of V-Class bracing improving intonation.

Yes, $2,199 is a lot of money for a guitar that, by design, presents a player with many unknown variables. The AD27e sounds different enough from a spruce-topped dread that many players will need to spend time to understand how it works within their style and relates to their musical objectives. Others will find its concise tonality immediately appealing. Given that, one should take our value score with a grain of salt and adjust according to personal experience.

But just because the AD27e’s design, materials, and tonality are unusual and specific doesn’t mean its appeal or musical potential is limited. It’s easy to hear how the AD27e would be a recording superstar. It rings sweetly without overpowering a mix and provides beautiful counterpoint in arrangements and mixes where the low-end is occupied by other instruments—no small consideration in modern effects-laden mix styles. But while its voice is focused, the AD27e can still sound big, and it most certainly sounds sweet. Any curious flattop aficionado should check out the AD27e to hear what it does differently. Just don’t be surprised if its sweet tonality and ace playability put their hooks in you.