New Apple Mac Studio Like A Mac Mini On Steroids 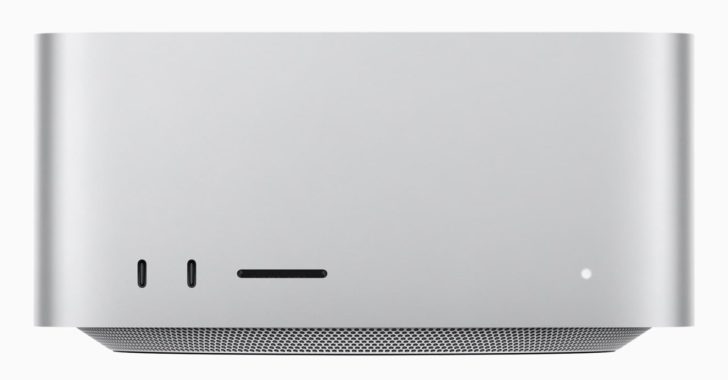 Apple today introduced Mac Studio, a new Mac desktop computer, powered by the M1 Max or M1 Ultra chip, which they say is the world’s most powerful chip for a personal computer.

It’s a tiny desktop Mac that can play back 18 streams of ProRes video, support up to 128GB of unified memory, 7.4GB/s SSD reads & up to 8TB capacity. And by building on the energy-efficient architecture, it can do this without getting hot or requiring noisy fans.

The Mac Studio blows away the current M1 Mac Minis in many other ways. On the back, Mac Studio includes four Thunderbolt 4 ports to connect displays and high-performance devices, a 10Gb Ethernet port, two USB-A ports, an HDMI port, and a pro audio jack for high-impedance headphones or external amplified speakers. Wi-Fi 6 and Bluetooth 5.0 are built in as well.

And because users frequently connect and disconnect devices, like portable storage, the Mac Studio also includes ports on the front for more convenient access. There are two USB-C ports, which on M1 Max supports 10Gb/s USB 3, and on M1 Ultra supports 40Gb/s Thunderbolt 4.

There is also an SD card slot on the front to easily import photos and video. And Mac Studio supports up to four displays, plus a 4K TV.

Apple included Ableton in the introduction, suggesting essentially that users will need to make more complex projects before the M1 Ultra will break a sweat. Apple says that “Musicians and producers can work on the most complex compositions, with hundreds of tracks, plug-ins, and virtual instruments, all played in real time.”

Check out the stats and share your thoughts on the new Mac in the comments!