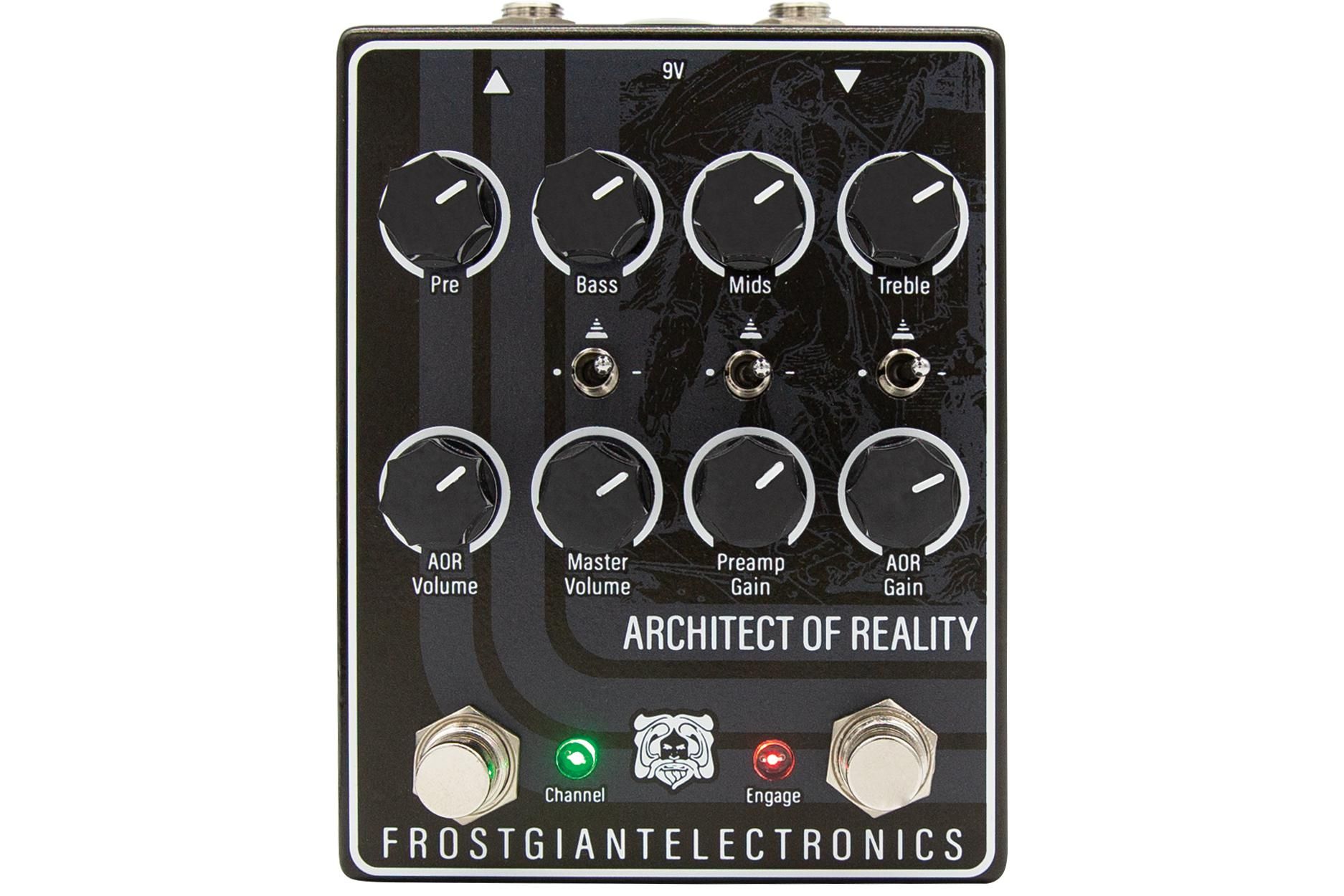 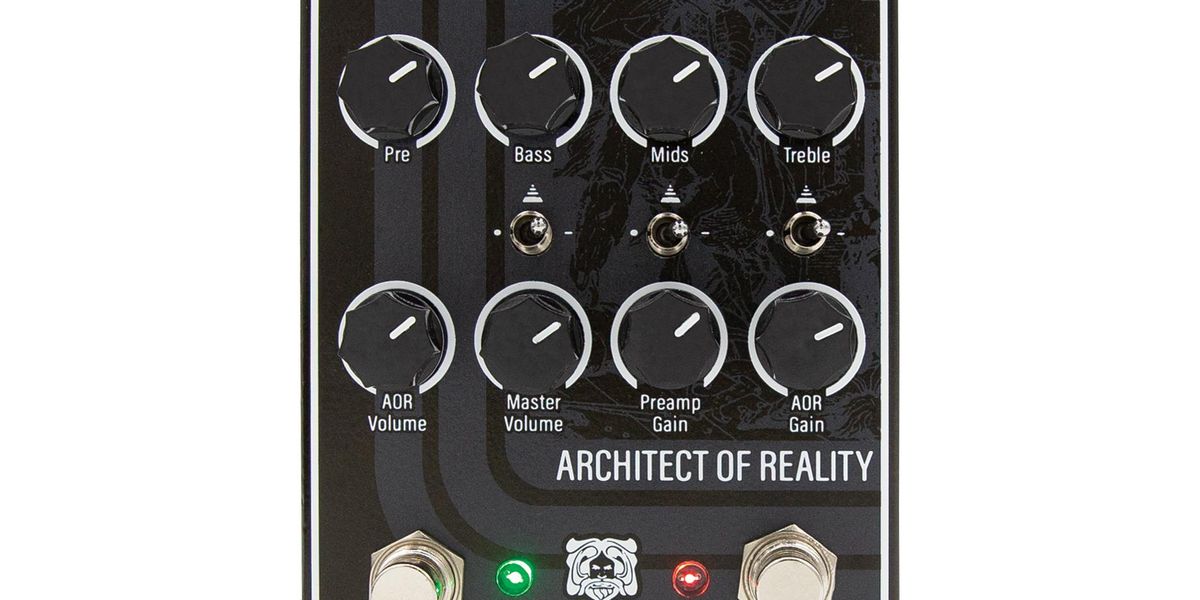 If doom metal and its variants are big blips on your radar, you’ve probably noticed there’s a dearth of all-in-one stompboxes capable of unleashing genre-worthy filth and mayhem. A Big Muff (or any number of other fuzzes) and a distortion or two will take you a long way, but for dedicated doomers the aural onslaught usually isn’t just about cascading gain—it’s watts and decibels wreaking havoc on speaker cones. Which is why powerful heads (often 120- or 200-watt bass or PA models) from the likes of Sunn, Ampeg, Peavey, Orange, Hiwatt, Sound City, and Marshall largely rule the realm.

Another highly acclaimed amp for the task is Laney’s Advanced Overdrive Response series from the early ’80s, particularly the 50- and 100-watt Pro-Tube Lead heads, which had a handwired architecture much like a Marshall JMP circuit, only with an extra gain stage and a slightly darker sound. Influential doom/stoner/sludge bands who embraced AORs include Sleep, High on Fire, the Sword, and Electric Wizard. Of course, Laney’s doom cred goes much further back than that: Their most famous endorsee, Tony Iommi, is the veritable well from whence doom’s many tributaries spring—particularly his early Sabbath work, which was powered by Laney LA100 BL heads.

Recorded with a Schecter Ultra III into the Architect, an Ibanez ES-2 Echo Shifter, and a Jaguar HC50 miked with a Royer R-121 (two feet back) and feeding an Audient iD44 interface going into GarageBand with no EQ-ing, compression, or effects.

But for Eric Calvert, head of Texas-based Frost Giant Electronics, AORs are where it’s at. In fact, his goal since founding Frost Giant has been to recreate the preamp in his own beloved AOR head from 1985. Now, with the help of Nick Williams (of Dunwich Amplification fame), Calvert’s dream has finally been realized with the Architect of Reality—a powerful homage to both Laney and, presumably, Sabbath’s 1971 sonic milestone, Master of Reality.

The Persistence of Realities

The Architect puts essentially every control from the front panel of an 8-knob AOR atop a medium-sized stompbox that’s billed as a “2-channel” design. But it’s more accurate to describe it as a massively powerful, wide-ranging distortion (right-side footswitch) with a cascading-gain feature (“AOR channel” footswitch) that can be layered over the base tone.

To help achieve its bludgeoning ends, the JFET-driven Architect converts 9V of AC power to a whopping 36V (battery power is not an option). The EQ—bass, mids, and treble knobs, corresponding boost toggles, and a presence (“pre”) knob—runs along the top row, but I found it peculiar that the master volume and preamp gain for the base tone (the “red channel”) are sandwiched between AOR (“green channel”) volume and gain knobs. The layout would feel more logical and intuitive—and therefore faster and easier to use—if AOR volume and gain were side-by-side above the AOR footswitch.

It’s capable of myriad metal flavors, but its real calling card is sheer might.

To put the Architect’s intriguing ambitions to the test, I used a Les Paul, an Eastwood Sidejack baritone, and a Schecter Ultra III through a few different setups: a Revv G20 powering a Bogner closed-back 2×12, a Jaguar HC50 1×12, a silver-panel Fender Vibrolux Reverb paired with a Fender Rumble 200 1×15 bass amp, and a Sound City SC30 also paired with the Rumble. From the outset, the Architect’s massive volume and gain capabilities were apparent. The red side’s hot-rodded-Marshall-like preamp yields everything from toothsome gain excellent for old-school metal to blistering thrash at max. Meanwhile, the red side’s master volume is astonishingly loud—when I wasn’t using a bass amp (which allowed me to turn the guitar amp’s bass down), I began fearing for my speakers’ wellbeing when volume merely approached the noon mark.

But wide-ranging gain wouldn’t mean much if the EQ weren’t wisely focused. No matter where I dialed the treble, mids, and presence, tones never crossed over into abominable thinness. The bass control feels tight and muscular throughout its range, though it doesn’t seem particularly corpulent when maxed in red mode alone. But kick on the green side and it sounds absolutely explosive at all but the most conservative AOR settings. As with red mode, the AOR volume will likely sound like it’s clobbering your amp halfway through its range, even if the base channel’s volume is set pretty low. One couldn’t be blamed for using the green side to simulate pushing or literally push speaker cabs to their limits without looking back, but AOR mode is also capable of practical precision and subtle restraint—say, thickening things a smidge or adding razor sharpness to the core sound.

If you’re after droning, foundation-rattling gain and are sick of using multiple stompboxes and/or backbreaking stacks, you’ll find a lot to love in Frost Giant’s Architect of Reality. It’s capable of myriad metal flavors, but its real calling card is sheer might that occupies the mythical space between distortion and fuzz, where feral howls smudge together and destruction and chaos feel like real propositions. For extreme sounds—especially if you’re not miking your amp—it’s probably advisable to pair the Architect with a robust, high-wattage/high-headroom amp, if not also one of the many light, dependable bass amps on the market. But that’s a much more doable proposition than scouring the internet for rare, heavy-ass old stacks that keep going up in price.