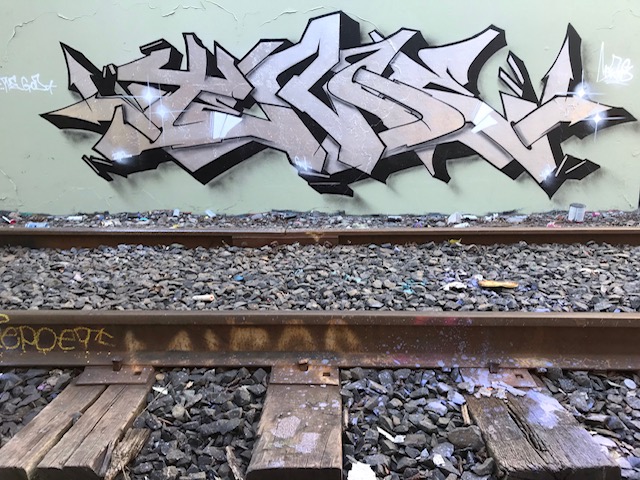 Alright so thanks for taking the time out to do this interview, can you give us a brief introduction to who you are, what your history is in the graffiti game and what crew do you rep?

I write Tense one and I’m from Boston Mass. I started painting Graffiti in 2000, however I first got drawing graff in middle school which would be about 1997. My best friend and crew member ‘Drupe’ painted our first graff mural in our school cafeteria. It said BBCS (Benjamin Banneker Charter School) and had a b-boy character next to it primarily painted by Drupe. We both collaborated on the letters. Drupe came from BK to live in Boston in the early 90s and after that mural we were on a graffiti high. Everytime we painted it was a silent battle. It was a silent mutual understanding that when you paint you go in!

When I look at your work I am blown away by the amount of work you do, are you working full time as a graffiti artist or is this purely a creative outlet for no profit? I cant imagine you’re not making some money, you gotta make some original canvases or marker pieces and sell them! You’re super talented bro!

The crews I represent are GN,EDA,Control Crew, OTM, YNN. I have always seen myself as a style  writer. I took notes and was influenced by some of the best in the game; Soem, Problak, Deme, Temp, Kem5.. and the list could go on but that’s just to name a few. Graffiti is mathematics. For me personally, Graffiti is a ritual. 90% of my pieces are freestyle because it’s not about what I sketched the night before it’s about the energy I’m feeling on the spot within the confines of proportion, mechanics, weight, and a balanced color scheme.

I am not a full time paid artist. I drive a Tractor Trailer which is the other thing that I love as much as painting. I plan to merge both in an interesting way so stay tuned. I’ve done many commissions in my graff career, however it’s most fulfilling to paint without permission.

What part of the country did your graffiti journey originate from?  Who do you think is an underrated graff artist from your city that doesnt get recognition like they should and who did you learn from?

I have painted with a lot of writers. Sometimes that can be a good thing and sometimes not. Painting with different writers around the country and outside the country is what challenged my style and helped me to branch out of the box and exercise versatility. In my crews alone there are writers that really force me to push the bar with style. Stem,Soem, Bies, Perve, Above, Temp are wild style writers. When ever I’ve painted with them, you might as well say it’s as if you had spit a rhyme over a Premier beat. Funky letters that can individually stand alone with out the rest, arrows that have an origin, half stars, doo dads, connections, and that’s just mechanically speaking. The sketch is one of my favorite parts of painting a burner. It’s the bones and foundation of the style that I’m thinking about in that moment.

What is your favorite documentary or book that covers the history or major players of graffiti and why? Who do you think is an underrated graff artists in graffiti’s history that you think changed it for everyone?

One of the questions asked was who I think an underrated artist is from Boston. I would have to say Deme from ALA crew. I grew up seeing demes work around the city and on highways way before meeting him. He’s a classic writer that I looked up to with funky letters, and sick realistic characters and portraits.

I see you do a lot of collabs with @horrified_nightstm, really badass work! Is doing collaborations your favorite thing about graffiti, and do you think it helps you grow as an artist more than just doing your own thing? Do you do paint jams as well?
I have painted many jams in my time. One of my favorite jams is Paintlouis in MO. Super big wall space and a lot of great artist. I painted one of my favorite pieces there. Within the past 5 years I’ve been painting Art Basel which is cool. Last year I had the honor of battling in Miami with some heavy hitters; Menas, Perve, Cyst, myself, and a few others were all challenged to write the ‘Evolve’ at 004. Battling always keeps the sword sharp along with critique.

Speaking of collaborations I saw the youtube video of you and Tenk Dos doing your pieces together, its a dope video!

Thanks man you can check the video out here:

What kind of music do you listen to when you paint? Who are you favorite hip hop artists that you think got overlooked or faded too fast?

When im not painting, driving, or on daddy duty, I watch a lot of graff documentaries, and spray daily clips. Two of my favorite documentaries are Style Wars and Infamy. I first saw Style Wars in Highschool and it blew my mind. It was nostalgic because I grew up around trains. I missed that era as a writer so I never painted them but I could relate because Boston has a big transit system and the trains got bombed. I used to take the train to school and my thing was etch and sand paper on the windows. I went to an arts highschool so some of my influence outside of graff came from figure drawing, and acrylic painting which I still do.

The best advice I could give to any upcoming writers is to be yourself, study the history of those who have paved the way and be original.

Any crazy travel stories you can share? I see you travel a little bit in the states but have you been abroad?

The most recent graff story I have is when I went to South Carolina for a family event and decided to creep off in the car in the day time to paint a 48 foot trailer I set my sights on. I start painting and hear a police car breathing on the other side. He sees me and pulls away. Now I’m like oh shit here we go. Running wasn’t even a thought in my mind. I was in the middle of nowhere. He says “I’m law enforcement” in his southern accent. No sooner did he say that, 5 more pull up and surround me. I had it fully filled in green (funky dead letter) and just the TE outlined and drop shadowed. While the other cops stood there confused he asked me what it was. I told him it was art. I fed them the biggest line of shit ever. He said he had never heard of anyone painting graffiti in all of his 35 years of being a cop. That blew my mind but then again I was in the SC in the middle of no where. They told me to go to the hardware store and buff it. Lol I was like no problem lol.

Any shout outs you would like to give? Where can people follow you? Congrats on the new baby girl by the way!

Crazy shouts to anyone I’ve ever painted with. You know who you are 💯