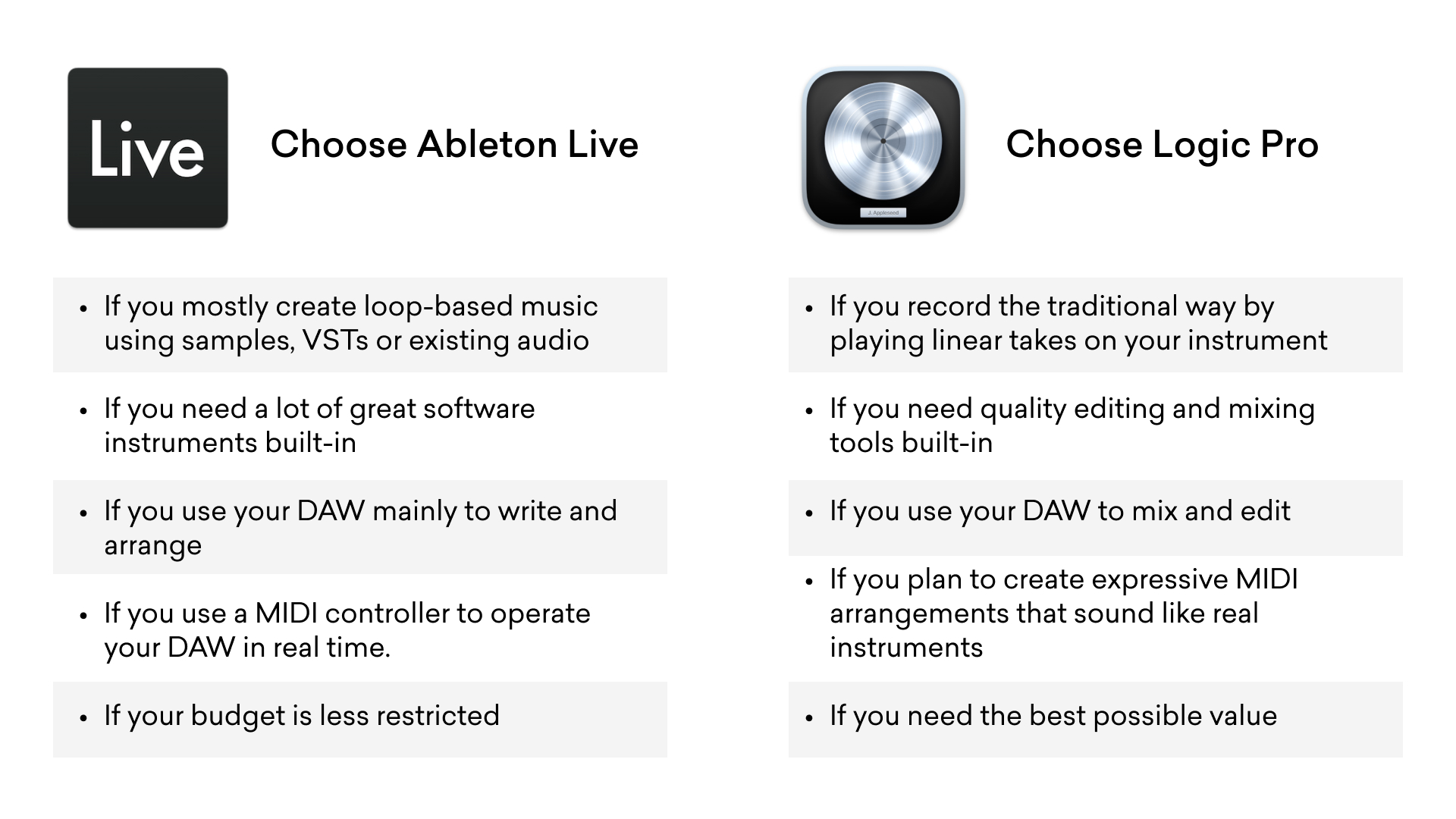 Choosing a DAW for the first time isn’t easy. Making the switch from one DAW to another can be tricky too.

While today’s recording software is easier than ever to use, it still takes a while to learn your way around any new music production app. If you’re new to producing music, you might be deciding between Logic vs. Ableton for your main DAW.

It’s no surprise. Logic Pro and Ableton Live are two of the best DAW platforms for new producers.

So which one should you choose? What do you need to know to decide and what does it take to learn?

In this article I’ll break down the pros and cons of each DAW and explain why you might want to choose one over the other.

How to choose a DAW

Before we get started, it’s worth mentioning that all DAWs are created for the same purpose—producing music.

While it may seem like there are huge differences from one to the next, many of the core functions are the same between programs.

In fact, today’s major DAWs are all capable of creating professional productions. The gaps in performance or features between different DAWs aren’t as wide as they used to be.

Making the right choice isn’t a life or death issue, and you can always change it up down the road. Not only that, many producers learn more than one DAW to stay flexible for different projects and collaborators.

That said, your main DAW should feel comfortable for your workflow and shouldn’t get in the way of your creativity.

With the basics out of the way, I’ll break down the key differences between Logic and Ableton and explain who can benefit most from their core features.

Workflow means the basic process of building tracks in a DAW. There are plenty of different approaches that vary by genre and personal style.

On the surface, the single biggest workflow difference between Logic and Ableton is the loop-based sequencing environment in Live called the Session view.

On the surface, the single biggest workflow difference between Logic and Ableton lies in the loop-based sequencing environment in Live called the Session view.

Instead of a traditional left-to-right timeline, Session view lets you quickly capture loops and arrange them into patterns and sequences.

Clips in the Session view have their own powerful pane of controls—including the famous Warp function that allows you to manipulate tempo and pitch.

If you work with virtual instruments, loops or existing audio, you might find this approach faster and more flexible for creating tracks.

While Apple has debuted a loop-based view in the latest release of Logic Pro, it still feels more traditional overall.

For example, the Logic Pro mixer offers a more familiar experience for mixing full songs with features like configurable buses and per-channel EQ.

On top of that, you may find traditional timeline operations like level automation easier to perform in Logic.

Overall, if you prefer a linear timeline and plan to get serious about mixing, Logic may be the best way forward.

However, it’s hard to deny the creative boost of the Ableton Session view for building up loop-based tracks fast.

Logic and Ableton handle MIDI equally well although each has their own strong points.

Logic and Ableton handle MIDI equally well although each has their own strong points.

I mentioned above that the MIDI clips in the Session view are easy to arrange in Live.

But Logic offers deep MIDI editing capabilities that can be helpful for programming expressive parts. Its piano roll editor is sophisticated but not too complex for beginners to jump in and get started.

On top of that, Logic includes a powerful notation editor that can turn MIDI parts into written music quickly and accurately.

If you’d like to use MIDI to emulate real instruments or write traditional scored music, Logic might be a good choice.

That said, Ableton offers perhaps the easiest MIDI control of DAW parameters with external hardware. Simply click the MIDI Learn icon, select any parameter and move any knob, button or slider on your controller—Ableton will map it automatically!

This lends itself especially well to playing…live…which is a big benefit to choosing Ableton.

Today’s DAWs come with powerful instruments and effects that can be just as good as third-party plugins.

While you’ll probably want to curate your own suite of mixing tools over time, it’s good to start out with the basics covered.

Ableton Live is well known for its producer-friendly effects and great instruments. If you need quality synthesis and sampling tools for making beats, Ableton’s built-in options are hard to beat.

Their signature look and feel also makes these instruments some of the easiest to use, even for beginners.

If you’ve ever felt intimidated by FM synthesis or powerful wavetable synths, Ableton’s take on these essentials will have you designing sounds in no time.

Ableton Live is well known for its producer-friendly effects and great instruments. If you need quality synthesis and sampling tools for making beats, Ableton’s built-in options are hard to beat.

But if you’re more concerned with traditional recording techniques, Logic offers some key tools for working with musical performances.

They can be a lifesaver when it comes to vocal pitch correction and rhythm editing.

I’m talking about classic keyboards like the Hammond B3 organ or Rhodes electric piano.

Rounded out with the the flexible character compressor and new vintage EQ collection, Logic offers a complete set of tools right out of the box.

Today’s DAWs are more flexible than ever and many include features that go beyond typical audio processing.

I’ll list a few important ones here, but head over to our in-depth DAW guides if you want to learn more.

Both Ableton Live 11 and Logic Pro feature the ability to add a video to the session. This is especially useful for creating soundtrack music or re-editing tracks for sync licensing.

Editing the video file is limited in both DAWs but at least you’ll be able to sync your work to the action on the timeline.

Apple is betting big on spatial audio with the introduction of Atmos to Apple Music in 2021. Conveniently, Logic Pro contains new features for mixing in this format if you’re interested in trying it out.

Live is a bit more limited in this respect, but Ableton recently released a Surround Panner device for their Max for Live modular environment (more on that in a second) that helps for mixing in these formats.

This feature is unique to Ableton, but it expands the DAW’s power so much that it’s worth mentioning here. Max/MSP is a famous graphical programming language for audio used by composers and sound designers.

Max for Live is an edition of the software built to run inside Live. You can design and build almost any kind of musical tool you can imagine in Max for Live, but you don’t have to be a programming whiz to use it. There’s a large community out there developing custom devices available to download for free.

While features and workflow are certainly important, cost is a big factor at the end of the day.

While features and workflow are certainly important, cost is a big factor at the end of the day.

Pro DAW software doesn’t come cheap, but there are still big variations between apps with different tiers and plans available in some cases.

Logic has recently become cheaper than ever at a surprising $199 USD for the full version of the app. Refreshingly, there’s no subscription model either so paying this amount once means you’ll have access to the DAW forever.

Ableton comes in three price tiers with an introductory edition available for just $99 USD. Unfortunately, Live 11 Intro is severely limited in track count and I/O. I’d only recommend this option if you’re looking to experiment with Live’s basic features to see if it’s a good fit.

That leaves Live 11 Standard at $449 USD and Live 11 Suite at $749 USD. Standard contains all the essential features of Live without limitations, but you’ll need to buy Suite to use the full complement of instruments and effects.

Even with the high price, Live is still worth every penny. However, Logic Pro is cheaper overall.

Hot tip: Many beginner and intermediate music production products come bundled with an introductory version of Live. Look for a copy of Live Lite included with hardware products like MIDI Controllers and audio interfaces or even software.

Finally, there are a few hardware issues to consider as you decide between Logic and Ableton.

First off, it’s worth noting that Logic is only available for Mac computers. It’s one of Apple’s flagship pro apps, so don’t expect a Windows version any time soon.

Ableton works just as well on either platform, so it might be high on your list if you use a PC for production.

When it comes to hardware, Ableton has a handful of specialized controllers that have been developed to let you go hands-on with all its features.

We broke down the whole list in this article, but the most important one to know is the Push. It was built by the Ableton team to be the perfect hands-on companion to Live.

If you’re planning to play your DAW like an instrument Ableton has the best dedicated controllers.

Hot tip: Although Live is known for its use in performances, Mainstage is the companion app to Logic that many musicians use as a VST host to perform live. Check out our VST Host breakdown to see how this type of app functions in a live setting.

As I pointed out above, there’s no clear winner when it comes to choice of DAW. It’s all about what works for you.

That said, you may have identified some common threads in my breakdown of Logic and Ableton Live, so here’s my advice in a nutshell:

Choose your own adventure

Deciding on which DAW to use may seem daunting, but it shouldn’t stop you from getting started as a producer.

In the end, any DAW you choose is a great start, even if you have to make a change down the road.

If you’ve made it through this article you’ll at least have a head start on two of the most popular DAWs for new producers.