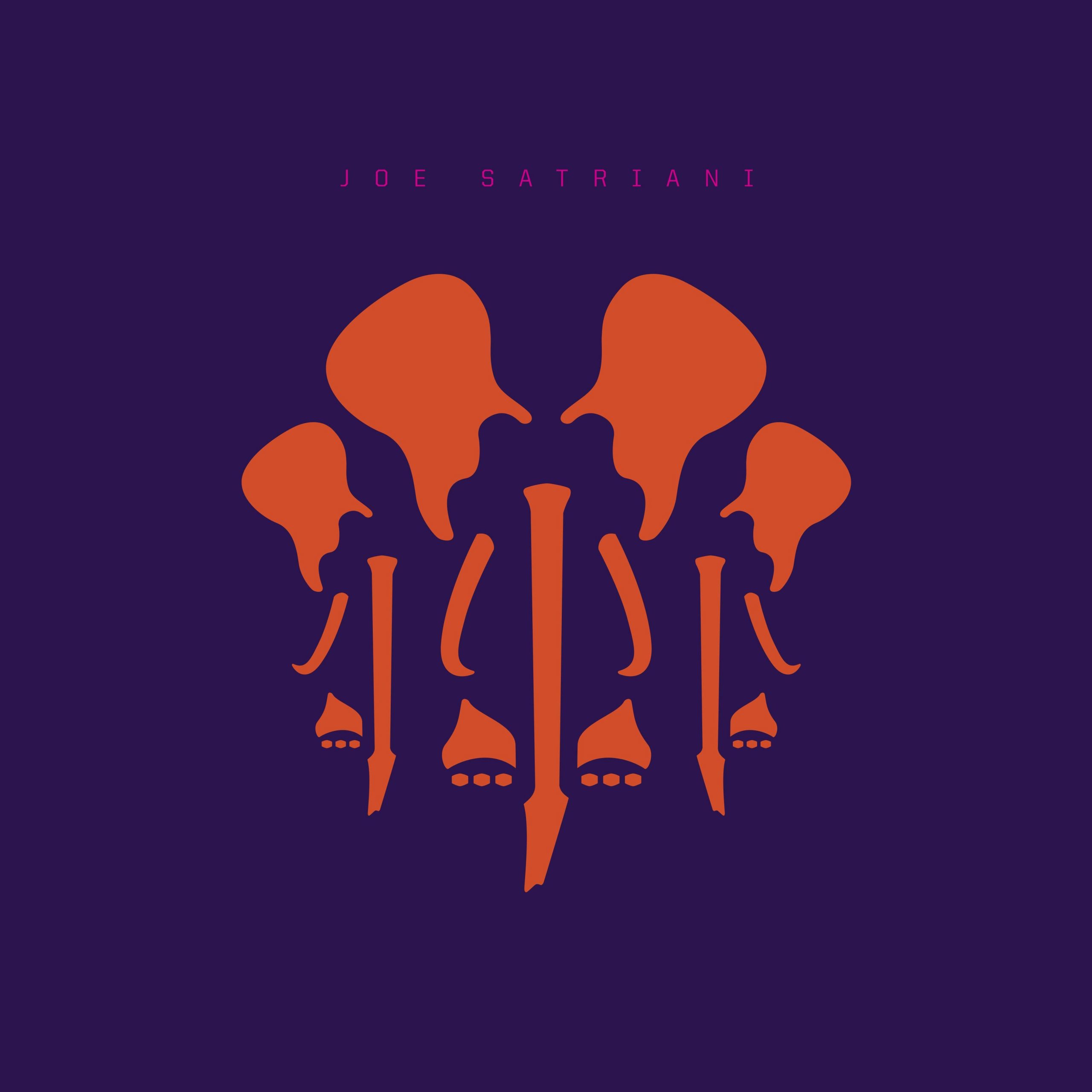 Joe Satriani: The Sound of Solitude

“Don’t ever think that you’re going to impress people by reminding them that you can play faster, stretch your fingers longer, be louder, and look cooler,” says Joe Satriani. Those words carry a lot of weight coming from Satch, who can, of course, do all those things. But while he’s received plenty of attention for his endless supply of dexterous digital athletics over the years, he’s always been a committed melody player. And if you ask him, that’s even harder to dish out.

Satriani has long understood that guitarists cannot live on shred alone. With the release of his 18th studio album, The Elephants of Mars, he proves himself a living example of this message, showcasing the electric guitar as a lyrical, emotionally attuned instrument that can exist on a chromatic spectrum of senses—particularly when it’s in the right hands. The album covers a range of ground, from the Middle Eastern-influenced “Sahara”—whose release was accompanied by a music video directed by Satriani’s son ZZ—to the melancholic ballad “Faceless” to “Dance of the Spores,” which features a full-on circus music breakdown.

Having an extensive body of work makes it that much harder for some players to keep things fresh, but Satriani pulls it off. For Elephants, he decided to use the isolation of the early pandemic to focus creatively and give remote recording a shot, calling upon bandmates bassist Bryan Beller, drummer Kenny Aronoff, and keyboardist Rai Thistlethwayte to contribute.

When Satriani’s previous album, Shapeshifting, was released in April 2020, he and his team imagined that its promotional tour would be postponed for about three to six months. He considered recording a vocal album to offer as a free supplement, but months later the world was still on hold—and he realized that his audience would be expecting an entirely new project the next time he was to release something. So, he got to work on what would eventually become Elephants.

“I’m always a bit shy around people and it gets reflected in how I play.”

The remote recording experience created a significant change of pace. “For the last couple of records, I really enjoyed going to the studio, having the clock on the wall ticking fast,” he shares. “In a way, having a schedule is good; it just gets you motivated to work hard. If everybody’s stuck at home and there’s no clock on the wall, then we can’t use that as an excuse anymore. Now it’s just you listening to your performance, and it comes down to whether you’re going to stand behind it.”

As the guitarist became more patient and considered, he asked his band to do the same, telling them, “I’m not going to send you anything until I think it’s the best version that I can give you, and I expect everyone else to take their time. Don’t feel pressured by me to just get it done. And if you want to do something different, change my mind with a great performance.”


TIDBIT: Recording remotely gave Satriani access to a broader range of emotions while working. It’s a first for the guitarist, who says he “never would have felt that vulnerable or comfortable” if he weren’t alone while tracking.

That freed the instrumentalists from the restraints of both time and peer pressure, and for Satriani, performing all his parts in solitude yielded a more peaceful creative process: “[If I hadn’t been recording alone,] I never would have felt that vulnerable or comfortable. I’m always a bit shy around people and it gets reflected in how I play, so this setup worked for me in a way that it’d never worked before.”

“Guitars are made of wood and wood comes out of the ground, so you have only so much control; nature really has most of it.”

But wouldn’t that environment, free from time constraints, give way to extreme perfectionism? Not if you set rules for yourself, Satriani says. His solution was to remind himself not to “sit there and fix everything,” but rather to make sure he was tuned in to the moods of the tracks he was recording. He was sure that if he wasn’t having fun while recording the upbeat, bass- and synth-driven “Pumpin’” or the funk-infused “Blue Foot Groovy,” the music would bore his audience. And on “Dance of the Spores,” he immersed himself in pure fantasy. “I came up with this idea where, while we’re worried about politics and the virus and the environment and all this kind of stuff, there are spores having parties because everything’s great for them,” Satriani muses. “Like SpongeBob: It’s so insane, it’s so impossible, and yet it’s so funny and sad and cute. Everything about life is in that absolutely ridiculous concept. So, what would that sound like?”

Reaching for a big bend on a guitar that bears his likeness, Satriani picks ecstatically at a concert at the Tower Theater in Upper Darby, Pennsylvania.

On the other end of the emotional spectrum, Satriani spent days repeatedly trying to embody the grief he wanted to convey on the darker “Desolation.” Finally, unrehearsed and unpracticed, he improvised something that fit perfectly. “I never would have done that had we been in a studio with people standing around,” he says.

Since around 1999, Satriani’s standard protocol for tracking has been to record direct and reamp later. But this time around, reamping “seemed to get rid of a certain percentage of my personality and replace it with ‘general electric guitar.’” Instead, mixing engineer Greg Koller employed the Avid SansAmp plug-in to the guitar tracks for the entire album.

“I’m not sure if that’s a letting go of ego or just realizing your place in the big scheme of things. But I had to realize that it wasn’t all about me.”

“I plugged into a Millennia Media HV-37 Mic Pre and went right into Pro Tools,” Satriani elaborates. “A couple of times there was a wah-wah pedal, a [TC Electronic] Sub ‘N’ Up, a [Dunlop Hendrix ’69 Psych Series] Octavio Fuzz, or an [Electro-Harmonix] Micro Q-Tron. And that was it!”

If you’ve read Satriani’s autobiography, Strange Beautiful Music, you know that the guitarist is obsessed with gear. He spends several chapters—each devoted to the making of a different album—sharing every technical approach and gear combination that went into each recording. When asked about his signature guitars, he’s a bit Zen. “Guitars are made of wood,” he says, “and wood comes out of the ground, so you have only so much control; nature really has most of it.”


Donning his other signature item—black Oakleys—Satch boogies down at the Fillmore in Detroit.

But that hasn’t stopped him from refining the design of his signature models over the years. “All these changes that I’ve requested and that Ibanez made really did help me bring my music forward to a higher level of expression.” Picking up his Ibanez JS2450 B&W Paisley Proto, Satriani points out some of those refinements: “the height of the bridge, the fact that the edge bridge is such a well-made machine piece, the Satchur8 pickup, the size of the frets, and the fact that Ibanez now stock puts in the Sustainiac in the bridge position. It’s a 24-fret model, with a compound-radius neck. Everything about this guitar helps me express myself, and I’m still working on it. I’ve never changed my pursuit of trying to make the guitar less resistant to my musical ideas. I feel more like I have so much to say, and my body just will not cooperate to let me get it out properly,” he says, laughing.

Satriani has been searching for ways to express his ideas ever since his early days growing up in Westbury, Long Island, where he not only dedicated himself to his music, but to sharing what he’d learned by modeling his educator mother, Katherine, and, at the age of 15, famously teaching a young Steve Vai. “I realized everything that my mother learned in life she hands over—without holding anything back—to these kids that she’s teaching,” he explains. “So that’s what I should do for this little Steve Vai kid who’s just got these amazing hands, great timing, and really sharp ears. I’m not sure if that’s a letting go of ego or just realizing your place in the big scheme of things. But I had to realize that it wasn’t all about me.”

“Playing a ballad with a few notes and making every note count—that is a skinny mountain road and any variation is death. You’re plunging off the road into ultimate failure.”

That concept still permeates his music. It comes back to expression of melody, and Satriani cites Tony Bennett as an inspiration for knowing when to pause or use fewer notes. “The amount of technique that he has to use to nail it is far more intensive. He has to edit every little bit,” he says. “It’s not like playing your fastest and sticking your tongue out and running around the stage. That’s the easy part. That is a six-lane highway with no lines on it. But playing a ballad with a few notes and making every note count—that is a skinny mountain road and any variation is death. You’re plunging off the road into ultimate failure.”

Authenticity and humility are at the heart of making truly meaningful art, and, speaking with Satriani, it’s clear that those ideals are deeply entwined with what he does. He’s a dedicated practitioner who is still growing, learning, and sharing. “This only works if you give it away,” he adds. “You can’t make people think about your music the way you thought about it—it becomes theirs. When they hear it, it becomes the soundtrack to something in their life. And it’s got nothing to do with you, ’cause you’ve given it away.”

No song better exemplifies Joe Satriani’s penchant for expressive melodic leads as his classic “Always with Me, Always with You” from Surfing with the Alien. This 2006 performance features all the slick moves of the original with an extra dose of live energy.