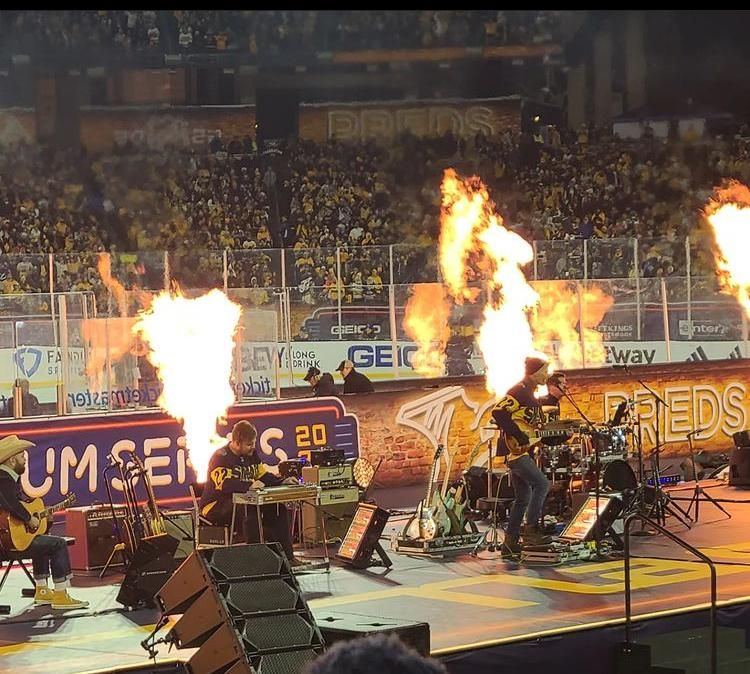 Last month, I wrapped the NHL Stadium Series at Nashville’s Nissan Stadium in front of 68,619 screaming fans and an army of TV production, crew, etc. The network chose to lean into Nashville’s Music City theme by including performances by 12 of the city’s biggest names in music. About a month ago, the director, Michael Dempsey, whom I worked with on several award shows, hired me as the music director. Here’s how it went.

The NHL set three stages across the front of Nissan field. At stage left was Miranda Lambert, at stage right was Dierks Bentley, and center stage was the house band with 10 other acts including Dustin Lynch, Lindsay Ell (check out her Rig Rundown), Tiera Kennedy, A. Jay and Jeremy Popoff of the band Lit, Frankie Ballard, Coffey Anderson, Joshua Hedley, Morgan Evans, Jackson Dean, and Bexar. I had played TV spots with five of these artists before, so that made it a bit more comfortable for them and me. But the rest were strangers, and we were doing this live in front of a packed stadium and millions viewing at home, so there was some pressure.

It had been raining on and off for days, and by the time we hit the stage it was freezing. My hands went numb, and I could not play.

Once the artist settled on their songs, I had an idea of what instrumentation we needed. I hired five friends to cover bass/BG, drums, keys/BG, steel/banjo/guitar, fiddle/accompaniment/percussion, along with your humble scribe, me, on guitar.

I was about to play all the guitar with 10 artists in front of millions of people. That stress combined with this painful cold shut my brain down.

I then edited the songs to fit a limited TV time, then made mockups of the arrangements on GarageBand so the artist and producers could get an idea of what they would sound like. Once production and the artists signed off on the arrangements, I wrote charts and sent them to the band. I then listened through and decided on instrumentation, and wrote a road map of who plays what, sent it to the band and audio, then trusted everyone to do their homework.

The plan was to rehearse the songs Friday night during our load-in/soundcheck, but nature did not cooperate. It had been raining on and off for days, and by the time we hit the stage it was freezing. My hands went numb, and I could not play. Nick Jonas had, like, eight bad bars of a solo in one award show, and now you never see him play (he’s an incredibly talented musician). I was about to play all the guitar with 10 artists in front of millions of people. That stress combined with this painful cold shut my brain down.

I literally could not hold a pick during our soundcheck. The next morning, I filled my pockets with Fred Kelly Bumblebee thumbpicks (as seen in the Steve Earle Rig Rundown). I like thumbpicks when I’m trying to hack my way through a fingerstyle acoustic song, or playing pedal steel, but for me it’s never as comfortable as a flat-pick on electric. But I had no choice.

Then I cut the fingers off a pair of driving gloves I found in my closet. I kept the thumb on the left hand. I hesitated, because they were expensive/new gloves, but I’m not the kind of person to wear driving gloves, so what the hell was I saving these for? Admittedly, it was a rocky start getting used to playing with gloves and a thumbpick, but I had to embrace the challenge and hope for the best. I put on thermal long johns, sweatpants, jeans, two pairs of socks with thermal boots, two shirts, three coats, and one of the Nashville Predators hockey jerseys and hats that production had given the band.


Our columnist and his team fire it up onstage.

Our call time was 11:15 a.m. and we had 15 minutes set aside to rehearse each artist. The band had never actually played together when the artists arrived onstage for a pre-show run-through. But my friends in the band are pros, so it sounded great despite not rehearsing.

Although I loaded the charts on my iPad, I brought the original paper charts just in case, and I’m glad I did, because the extreme cold killed my iPad between the rehearsal and showtime. I also brought two amps, two Les Pauls, and two Strats (tuned to Eb), just in case the cold killed any electronics, taking the belt-and-suspenders approach to ensure I got through it.

The combination of preparation and luck paid off. The producers got some portable heaters onstage, the weather was cold but not unbearable, and the performances all went well.

The show must go wrong, and yet maybe all that tension, uncertainty, and fear is essential to a good show. If you scored every shot, won every hand of poker, and never missed a note, life would be boring. The trick is to get comfortable with the curve balls and don’t beat yourself up over the misses.

That night, as I was unloading my gear, a freezing rain began to fall. I was so grateful that I wasn’t schlepping my coverless amps through the downpour. I’m not making this up for dramatic effect; real life is truly dramatic. Disasters lurk everywhere, and yet it’s usually a happy ending.